Since many Bujutsu (fighting systems) were established in Japan, teachers have used KUDEN to transfer the special deep knowledge to their selected students, such as their successors.  The Japanese word KUDEN is translated as “verbally transferred knowledge”.  For every RYUHA (style) they had special knowledge for almost all techniques and they did not leave this knowledge in writing to keep this knowledge confidential.  The teachers taught this knowledge verbally, only to the selected students whom they thought they could trust.  In this way they tried to keep the purity of their RYUHA and transfer it to future generations.

This is a unique technique of our Gyakutedo style which contains interesting and deep knowledge as a typical Jujutsu technique.  This KATA can also be performed by using the AIKI method which requires far less power than the original Jujutsu version. That option is explained later on.

A.How it is performed by Jujutsu

1. Hereafter the sequence is shown below. 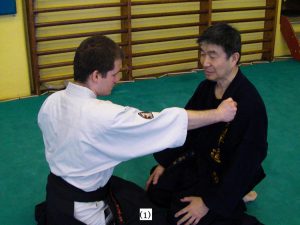 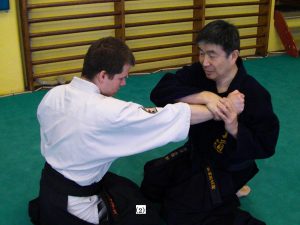 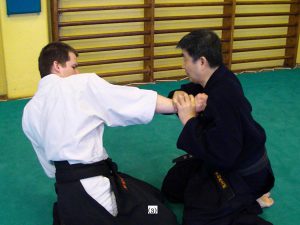 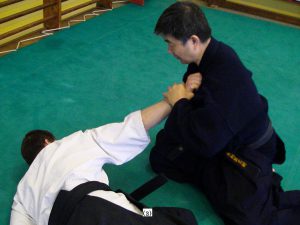 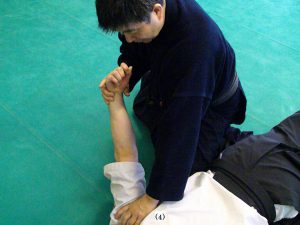 2. Know-how of this technique

And there are two options to realize 2) as:

a. Slide A’s right hand from the left collar to left shoulder as far as possible away from the the neck, fig-5,6
b.Make the center of rotation not at D’s head, but at the end of his right shoulder, fig-7,8You can also compare how it will become easier (i.e., need less power), when you compare the cases shown in fig-5,6,7,8.  There are remarkable differences. 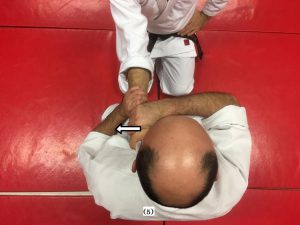 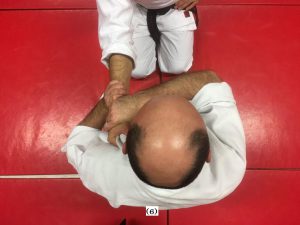 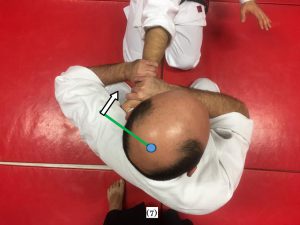 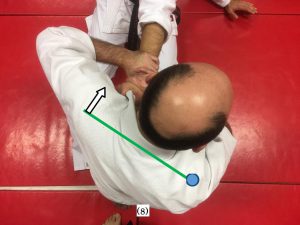 If one can apply AIKI to this technique, the beginning Kuzushi (崩し unbalancing) becomes extremely easy and can be done using far less power which will surely surprise you. Hereafter, it is explained as follows:

1) D grasps A’s left collar (ERI) with his right hand (JUN TORI).
2)A grasps D’s right lower arm by both hands and, through his right arm, transfers power directly to D’s right shoulder.
3) D receives A’s power into his shoulder, which is pushed backwards, causing him to lose his balance.
4) A turns his body to the right, pushes D’s right shoulder onto the floor, and performs ICHIJYO FUDO. 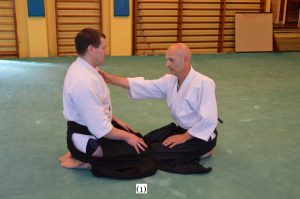 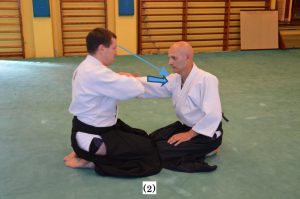 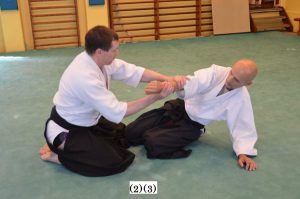 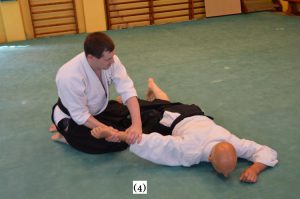 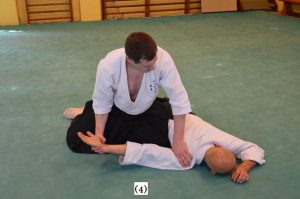 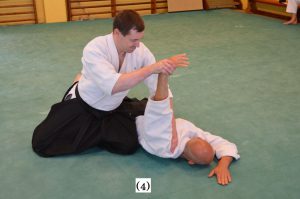 3. How this AIKI technique can be performed

In fig-2, if D pushes A’s right arm by power, A blocks it,  and D cannot unballance A. So, D applies power via A’s arm into his right shoulder.  D must apply his power just through A’s wrist, which never becomes set in-place, and it works directly into A’s right shoulder. Only a tiny amount of power is enough if D’s intention is correctly set on A’s right shoulder.
For this technique, AIKI, Method-3, or “targeted power transfer”, you can find a more detailed explanation in the book “How to Aiki”.

Reference：
“How to AIKI” written by Makoto KURABE, English version of “Dekiru Aikijutsu 出来る合気術” published by BAB Japan in 2012