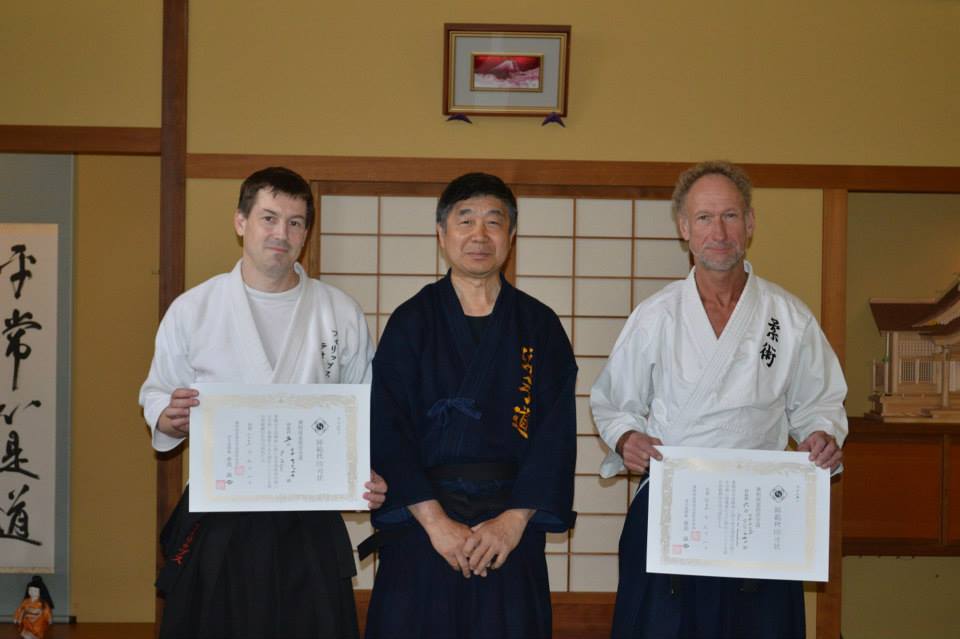 Dani system which gives certainty to master the system

People can list up several reasons why so many Budo (Japanese fighting systems) could have attained worldwide popularity.  Most people think it is because of the aspect that almost all Budo put emphasis on its mental effect to improve calmness, stability of mind and to improve person’s humanity itself.  It could be, of course, true but I would like to point out one more important point that almost all Budo have. That is Dani 段位 system by which not only a person who is training those Budo but also the others can clearly and easily recognise one’s level objectively.  And also all the curriculum and syllabus are provided clearly so that everybody can step up higher level with certain clear view. And it causes the practitioners certainty how far they could go up and how long it might take. No other fighting systems in the world could be so well prepared for the practitioners as Budo, I might say so.

How Dani system is settled

Dani is divided into two groups as Kyu degree and Dan degree. And in most of the cases Kyu starts from 7th and goes up to less numbers until 1st Kyu.

Kyu level is regarded as beginner’s level.  So 7th Kyu is just started training and 1st Kyu is finishing beginner’s level and is ready to go up to master course.  It depends on the characteristics of the systems how long it might take to complete all the Kyu courses.  Certain Budo like Judo and Karate which require more speedy movement that can only be attained by daily continuous hundreds times of simple repeating practise and accordingly it takes longer time to complete the course, say 2-4 years.  On the other hand, such Budo like Jujutsu which consists of bundle of knowledge and requires deeper understanding instead of repeating hundreds times of simple practise might take shorter time, say within 1-2 years.

Then let’s explain Dan degree which starts from 1st then goes up by increasing numbers till 10th at the highest. By the way I sometimes heard that there are Budo “masters” who has higher than 10th Dan in Europe.  I never ever can understand how and from whom a person could get such strange title as 12th Dan or even 15th Dan. It could and should not happen for true Budo, indeed.

Here I try to figure out the progress with the knowledge one could have earned at the each steps. I divide the knowledge in two categories as

1.Received from teachers
2.Earned by teaching the others

The level of the person in each steps (Dan degree) should be decided by the sum of piled up these two knowledge. 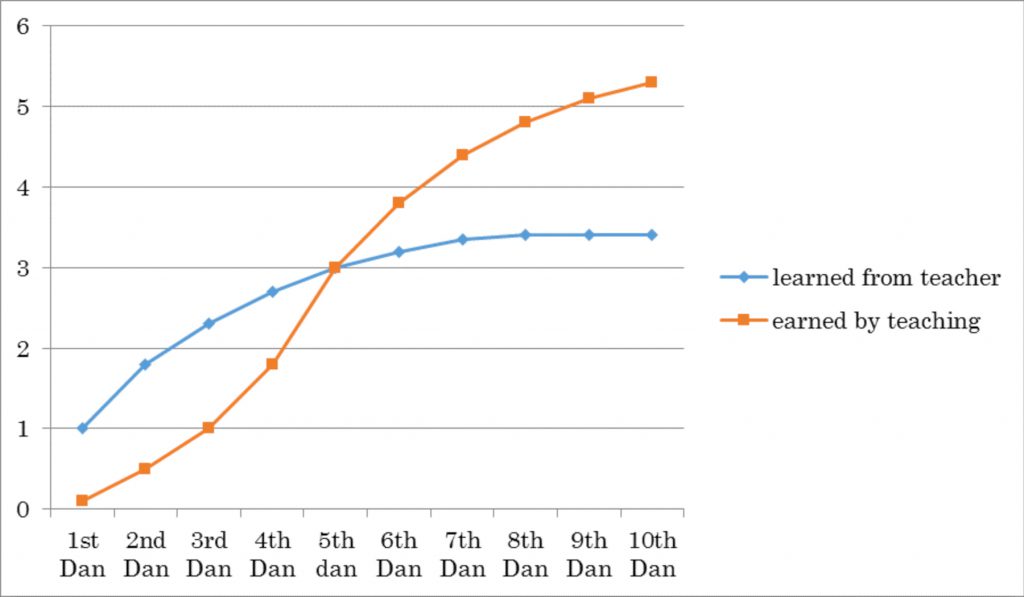 Here 1st Dan is regarded that a person has reached the level just as the starting line to master the system. It is often misunderstood out of Japan that 1st Dan could be a “goal” and many students resign when they reached 1st Dan.  According what I saw in Europe, it takes too long years to reach 1st Dan, such as several years at least.  That could be based in this wrong understanding. There should not be such much to teach until the 1st Dan level. In Japan, it takes, in general, 2-4 years for Judo and Karate and 1-2 years for Jujutsu.

The case 1) is out of discussion although this is the major one.  But for the case 2), those teachers do not understand one very important fact that a teacher can grow by teaching their students.  Only if they teach their students seriously they can grow higher level.  Because by teaching the others a teacher can understand the technique deeper and wider. What they can learn from their teacher is a part of the whole knowledge.

When a person reaches 3rd Dan, he is recognised that he has mastered something and can start opening own school and formally they are called as Sensei.  But this is like provisional license to teach.  When a person reaches 5th Dan with Shihan title, he/she is formally recognised to have mastered all the techniques of the system and can formally teach own students including examination right, although the certificate still should be issued by an authorised person in the Ryuha (system).  Because the Shihan degree or title should be given, in general, to a respectable person in the way of life with enough experience and wisdom,  it should be given for not quite young person under age of 40.  Normally the title is for the person aged over around 50.

Higher than 5th Dan degree are given according to the person’s achievement, contribution to the system, Budo society etc.   Although his physical strength decreases by his age which means a person’s physical strength meats the peak when he reaches 4 or 5th Dan and it start decreasing each year, his understanding onto the system becomes deeper and deeper.  It means he can keep growing as an instructor till the end of his life.  It also depends upon the characteristics of the system when one’s physical strength meats its peak.  In case of Judo and Karate it should happen in the earlier age as before 40. On the contrary for Jujutsu it could be 50.  And in case of Aiki Jutsu one can prolong the peak even to 70 because it requires much more knowledge than physical power.

Also this is the stage for somebody who intends to establish his own style because he has mastered all the techniques of the system and based on what he has mastered he can think over to establish his own style.  What I found quite strange in Europe is many persons who have just got 1st Dan they already start thinking to start his own style.  It is non-sense but actually many people had established their own “styles” like that way in Europe in the field of Karate and Jujutsu without having any new and original concepts nor techniques.

Higher Dani given as a present/award without proper achievement

As described before, higher Dan over 5th could be acknowledged according to such achievement in a Ryuha, Budo society as how many students he grew and schools he established etc. During my 30 years’ experience in Europe I have met Jujutsu “masters” with higher Dan degree such as 5th Dan or higher.  And it was and still is my big surprise and disappointment that most of such “masters” have no equivalent level to their titles at all.  When 8-9 years had past since I had started my Jujutsu teaching activity in the Netherlands, I suddenly received a diploma of 7th Dan Aiki Jujitsu from one Aiki Jujitsu federation in Germany.  The diploma was printed in a cheap A3 paper with both English and strange Japanese words such as 免許階段(certificate of stars(Kaidan)) instead of 免許皆伝(certificate of Kaidn(whole system is transferred)).  I guessed the representative person, named himself as “Soke” of his Aiki Jujutsu and claimed that many Jujitsu organizations in the world join his federation, simply wanted to invite me, a Japanese Jujutsu-ka, as a “decoration” of his federation because there was no Japanese master in his federation.

During the last 10 years of my stay in the Netherlands, I sometimes received requests to learn Jujutsu from me from not only Europe but from Afrika, north and south Amerika, say total around ten times. At first I accepted their requests and taught them seriously. But I could not feel their seriousness at all, and always they started asking me when they could receive 5th or higher Dan from me.

The funniest letter I received from Morocco. The person who introduced himself as a representative of “Jujitsu” federation of Morocco, had learned Jujutsu from Japanese master and received 7th Dan. He wanted learn Jujutsu from me and wrote his letter as below.

I could not help laughing with reading his letter. Just reading this letter we can notice it is a lie that he learned Jujutsu so much from a Japanese sensei.

After those experience I made it a rule for myself not to accept students out from Japan who already holds higher Dan degree from non-Japanese organization.

Although they are minor but there are several Ryuha (styles) which they apply the other naming than Dani.  For example Renshi 練士、Kyoshi教士 and Hanshi範士 with several subversions like Jun Hanshi, Sei Hanshi  etc.  We can recognize those different naming by associating them to normal Dani. Renshi could be equivalent to 1-3rd Dan、Kyoshi 4-6 Dan and Hanshi for upper than 7th Dan for instance.  But it is totally up to the Ryuha.