HOME >  Feature Articles >  The Secret of HAKKORYU JUJUTSU [Chapter 3 Do not resist, then you can realize the techniques] 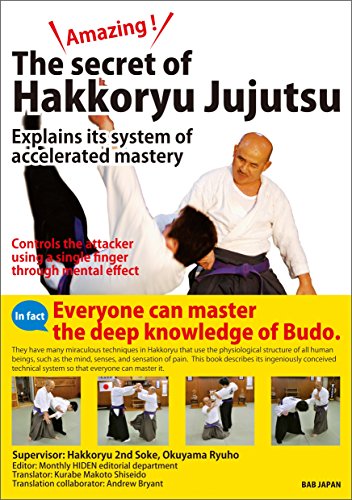 Chapter 3
Do not resist, then you can realize the techniques

Two strange mechanisms of the human body were introduced both in Chapter 1 as arm raising motion and in Chapter 2 as arm lowering motion. Both motions could be performed by unmeasurable “strength”, which is created as a result of eliminating one’s conscious thought to raise or to lower the arm.
In this chapter we focus on those motions from a different perspective. In the previous chapters we focused on the defender’s body movements but now we focus on the mechanics of the opponent’s body. Please watch the technique that Okuyama 2nd Soke showed in the photos on the next page. The opponent has grasped Okuyama 2nd Soke’s right wrist with his right hand and tried to strike Okuyama 2nd Soke’s face with his left fist. But at that moment, his next action was blocked, and he could do no further action. This same technique I introduced briefly in Chapter 1, but now Okuyama 2nd Soke’s movement has become much smaller.  It even seemed as though he made no movement himself.
In the next case the opponent grasped both of Okuyama 2nd Soke’s wrists and tried to kick him. In the same way he was completely blocked and could not kick Okuyama 2nd Soke, [photos 3-1]. 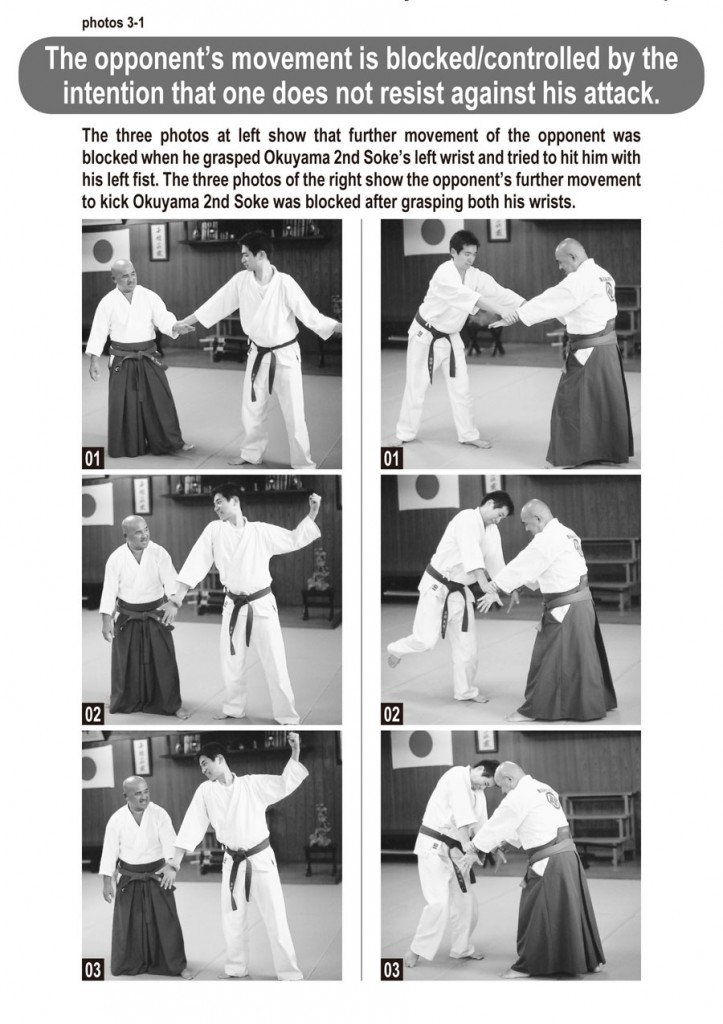 “It is not by the controlling or locking (Kime) of his wrists that I blocked his action”
What Okuyama 2nd Soke said is apparent, because Okuyama 2nd Soke did almost nothing against the opponent’s attack.
“Hakkoryu techniques are categorized into three levels as Ippan Waza (general level techniques), Shihan Waza (instructor’s level techniques) and Kaiden Waza (highest level techniques). Those two techniques which I showed here are categorized as Kaiden Waza. I never teach those two techniques to Shihan level students.” said Okuyama 2nd Soke.
“Whoops! These are such high level techniques. Then I should listen to what Okuyama 2nd Soke says with full of my attention.”
“2nd Soke, what are you doing then?  Why could the opponent not hit or kick you?”  I asked Okuyama 2nd Soke.   “You do not need to ask me with such hesitation. But, it is quite difficult to explain what happened through words. I would like to explain this phenomenon in an easier way so that even people who have no experience in Hakkoryu might understand.
It is important not to create tension in yourself, which makes a person very weak. In Hakkoryu we say that you shall be defeated if you create tension in yourself.”
I can understand what he says because I already experienced this concept in the previous Chapters 1 and 2. When you become tense, your body becomes stiff and you lose freedom of your body’s movement. If your body becomes stiff, it is easy for your opponent to apply techniques on you, which is logical. But it is not restricted only for those cases in which you try to do something using force that your body becomes stiff and immobile. Such tension and stiffness in the body also happens when one feels fear. Especially for such a case as the attacker grasps both of your wrists and will kick you, then you became tense through a sensation of fear. If this were to happen to me, I would surely become strained and tense terribly by a strong sense of fear.
“For such a case, you really need to be calm and to keep a stable mind. It seems that a person should be strictly disciplined and trained to be able to behave this way in such a situation. But you can realize this mental state much easier if you abandon in your own mind, the thought of resisting against your opponent’s attacking action.”
Well, in such a case where you do not resist, then you do not have to fear because the opponent cannot be your enemy any longer. Of course, it is not so easy to do it as Okuyama 2nd Soke said.
“Also, in these cases you should not take different actions according to the different ways the opponent attacks you, such as, if he tries to hit you with his left hand then you block by…. or if he tries to kick using his right foot then you block by …..  You must notice what reaction you should take through your sensitivity, and accordingly you should be able to do it even with your eyes closed.”
Now I can finally guess what happened. Because Okuyama 2nd Soke made no resisting behavior, like not trying to avoid nor resist against the opponent’s attacking action. He probably integrated himself to the opponent in his mind. Then I suddenly noticed the fact that it was because of Okuyama 2nd Soke’s mental sensitivity to the opponent that he fell into the state where he could not hit nor kick Okuyama 2nd Soke,   “Yes, it should be such a feeling. In fact the attacker needs to receive some reaction from his object when the person attacks that object. Without this reaction, an attacking action cannot be practically done.” 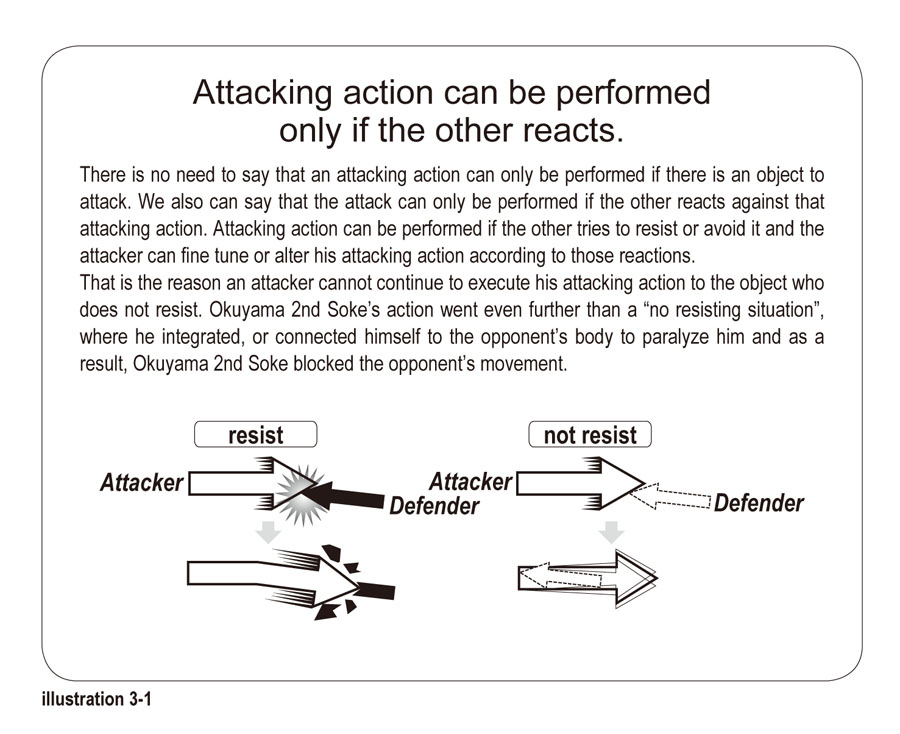 I now began to deeply understand the reason why the opponent stopped his attack. The opponent anticipates the other’s reaction, such as resistance or avoiding when he makes the attacking action. If such reaction does not happen, the opponent cannot carry out his attack. If the other does not resist, the opponent cannot execute his attack and he becomes unconsciously joined by the other person. As a result his whole body has been controlled by some kind of paralysis. This is exactly the case that happened.
“It might happen that some stranger suddenly attacks you when he is passing by you. You normally cannot react against such a sudden attack with good timing, and your reaction shall occur too late. That is why you have to always behave with the precondition to not resist against such an attack in the first place. Only in such a “weaker” situation, can you apply techniques to the attacker. That is Hakkoryu’s concept. And that is why it works against even a very strong opponent.

“It does not matter for you how strong the opponent is.” Such an ideal situation that is every martial artists dream really does exist. If one can say “it does not matter” with great confidence, he does not even need to, nor intend to resist against the attack.
The meaning of this mental effect is quite deep.
But anyway it seems like quite a strange technique, even after you understand the theory of how it works. As you can see, there is nothing physical actually blocking the opponent by which he was totally stopped from further action. “Is it because of pain that he could not move?” I asked Okuyama 2nd Soke. Because giving pain is the specialty of Hakkoryu.
“No, it is not by pain that he was blocked. He became wholly paralyzed and he was not controlled by pain. Pain only occurs in him simply as a result, not as a tool through which to paralyze him.”
Then Okuyama 2nd Soke showed me another Kaiden Waza as presented on the next page. Okuyama 2nd Soke was captured by the opponent by both wrists from behind. Then in a moment he reversed positions with the opponent. It is normally impossible for anybody to resist against the pulling arm power of the opponent from behind, unless he has much stronger power in his arms than the opponent.
Okuyama 2nd Soke might guide the opponent because he does not resist against the opponent’s power. Here we should pay particular attention to how the posturing is at the end of the sequence. The opponent cannot release his grasping hands and has to keep holding Okuyama 2nd Soke by both of his wrists, which causes the situation where he clinches himself with his own arms. Accordingly, he cannot escape from this painful posture by himself and is locked in place.
“In this case, I never specifically intend to apply a technique to him.”
It might be a result in such a case where the opponent attacks a person who does not resist. Okuyama 2nd Soke’s movement looks so normal and not special at all, but on the contrary, the result is miraculous, which even frightened me.

After all this, I reconsidered the meaning of this chapter’s theme: “no resistance”. For me “no resistance” means to follow the other’s movement and as such, I even actively try to follow it; this how I first understood Okuyama 2nd Soke’s explanation. As a result there is an inconsistency between the correct meaning and what I understood. If I watch Okuyama 2nd Soke’s motion, I can never find even a tiny intention to follow the attacker’s movement. So, I totally misunderstood what he explained as “no resistance”.
Of course it is clear that there exists no Bujutsu without some use of intention. It is the same as there is no human life without one’s will to live. But it seems like people tend to misunderstand the meaning of one’s will in his life, the same way they misunderstand “no resistance”.  People often struggle in vain, and create stress in themselves for nothing. 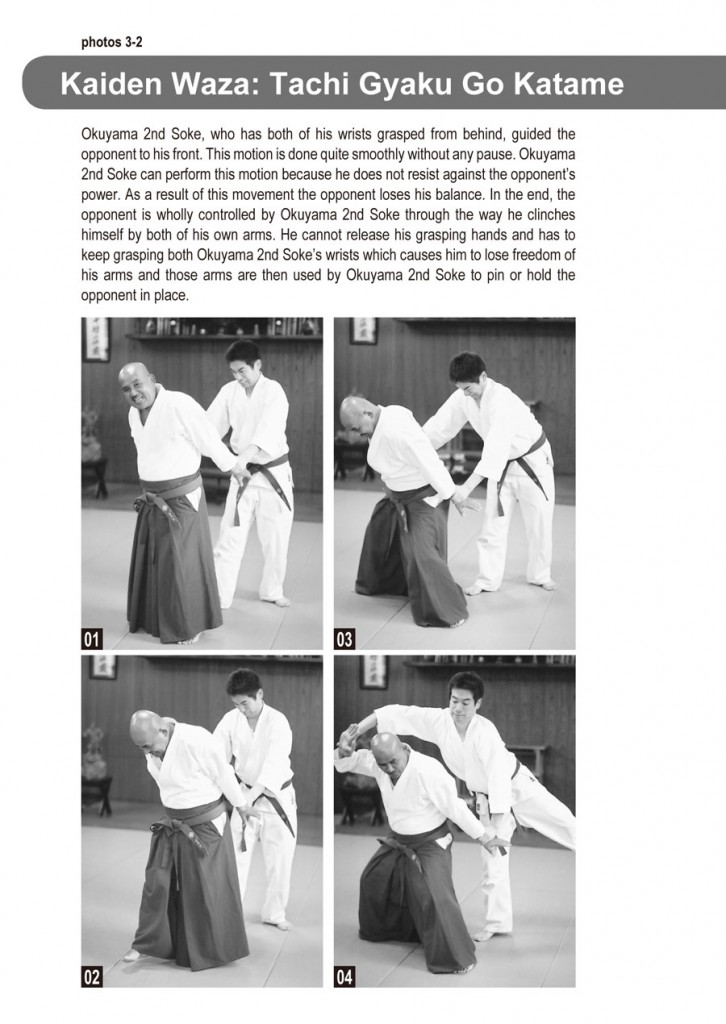 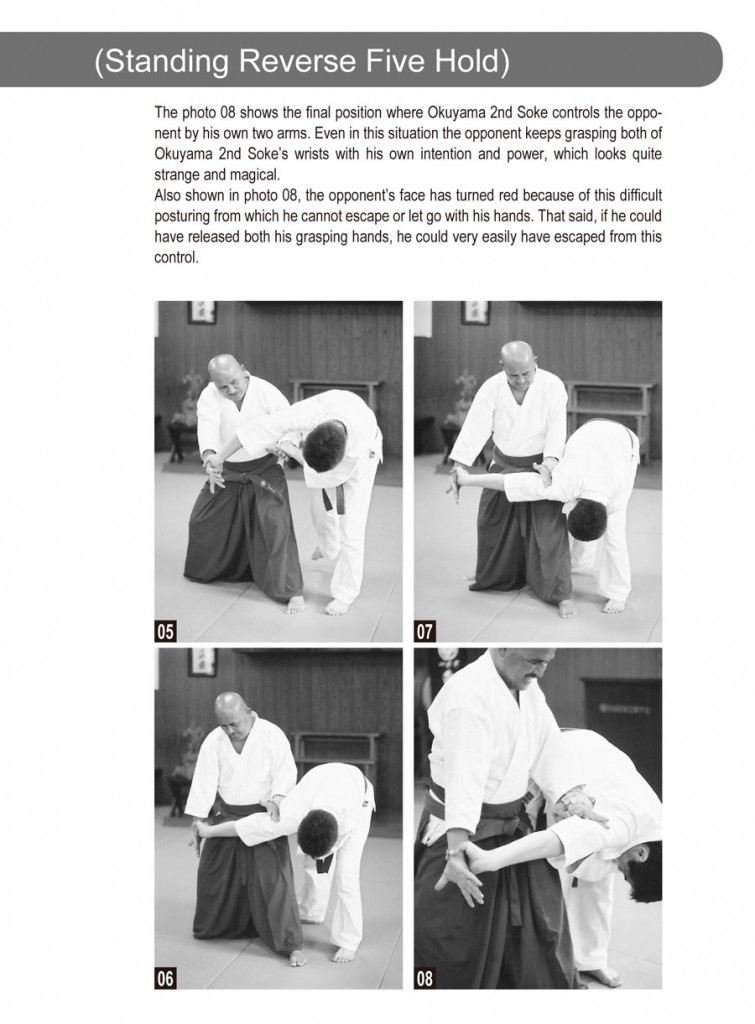