HOME >  The Brush is the Sword of the Mind

Reading the Character Behind the Brush Strokes
Spirit of the Samurai

In the past many masters of the sword were also masters of the brush. The arts of the sword and the brush share many things in common, and each contributes to the other. In this series William Reed, Shodo 10th-dan and Aikido 8th-dan, explores the spirit of the Samurai as revealed in their brushstrokes. In this 12th and last article of the series we look at the brush writing of Yamaoka Tesshu, Founder of the Mutoryu School of No Sword, a true Master of the Sword and the Brush, from the point of view of a modern Renaissance Samurai. 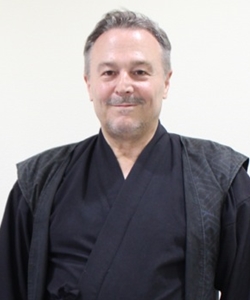 William Reed is from the USA, but is a long-time resident of Japan. Currently a professor at Yamanashi Gakuin University, in the International College of Liberal Arts (iCLA), where he is also a Co-Director of Japan Studies. As a Calligrapher, he holds a 10th-dan in Shodo and is Vice-Chairman of the Japan Calligraphy Education Association (Nihon Kyoiku Shodo Renmei), and is also a Certified Graphology Adviser from the Japan Graphologist Association. From the Scottish Samurai Association he received their highest honor, the Scottish Samurai Taisho Award. He also has been made Director of the Samurai Signature Association, in recognition of his efforts in writing this column, The Brush is the Sword of the Mind. As a Martial Artist, he holds an 8th-dan in Aikido from the Aikido Yuishinkai. He holds a Tokubetsu Shihan rank in Nanba, the Art of Physical Finesse. A regular television commentator for Yamanashi Broadcasting, he also has appeared numerous times on NHK World Journeys in Japan, and in documentaries as a navigator on traditional Japanese history and culture. He has appeared twice on TEDx Stages in Japan and Norway, and has written a bestseller in Japanese on World Class Speaking. For other articles in the Mastery of Sword and Letters Series, visit http://www.samurai-walk.com/samurai-shodo