HOME >  Feature Articles >  【The Brush is the Sword of the Mind vol.11】Sanada Ninja 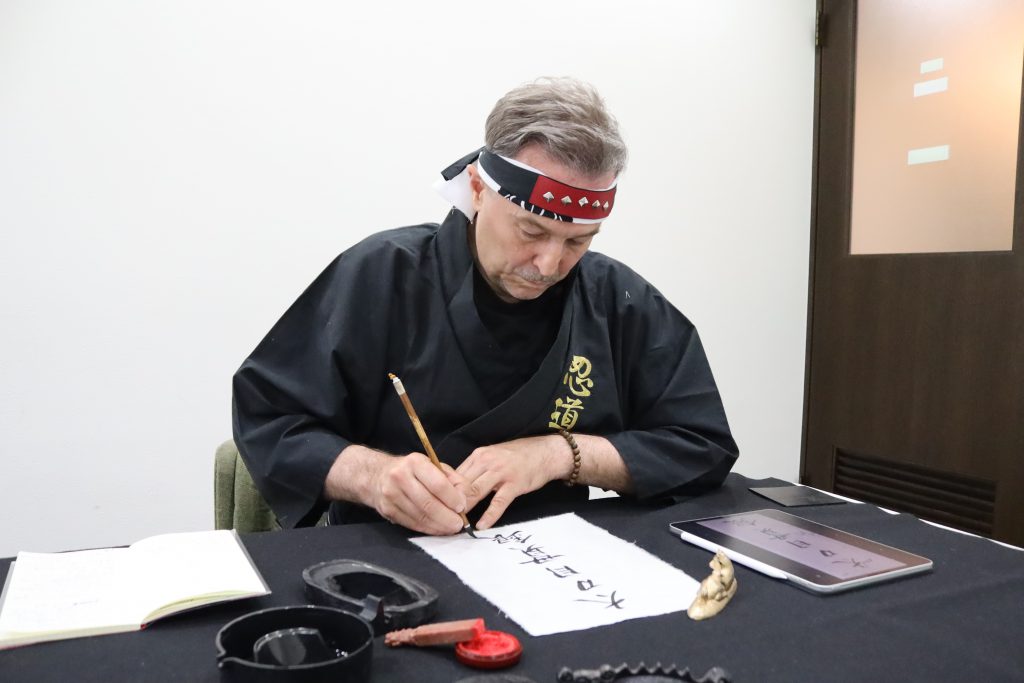 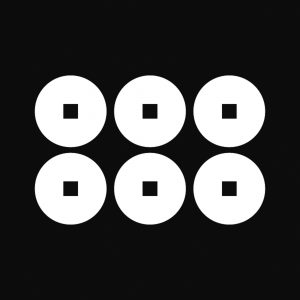 The Six Coin Kamon Family Crest of the Sanada expressed their readiness to face death.

The Ninja are characters familiar to us in films, novels, and manga. Ninja are a part of Japanese culture that is recognized and loved around the world. However in the process of dramatization, images of the Ninja have taken on a life of their own, often without any basis in history or reality.

Even the word Ninja itself is actually a product of historical novelists writing in the 20th century. Formerly they were known by a variety of names such as, shinobi mono (masters of stealth), kusa (grass), rappa (disrupters), suppa (pure waves), hayamichi no mono (fast travelers), but here we will call them Ninja.

The first time I met real Ninja was several years back in doing a television documentary on the Ninja in the village of Iga. I suspected that there were still historical traces from the Ninja of the past, but I was delighted to find that the Ninja tradition was alive and well!

Indeed there are today genuine Ninja of the Koga Banke Shinobiden Ninja Tradition, the 21st generation headmaster of the school, Master Kawakami Jinichi. Despite his calm manner, when he begins to demonstrate Ninja Arts the impression changes completely. Even as he utters the words, for example…he executes a rope binding technique on your arm that is truly lightning fast! Despite many years in the martial arts, it is uncommon to see a technique delivered with such speed. It left such a fresh impression that ignited my passion to learn more about Ninja Culture.

Shinobi 忍 the Blade over the Heart

Who were the Ninja? They were not a fantasy. They really existed as a group of people in Japan who carried out military missions. They gathered intelligence from enemy territories, carried out espionage and sabotage activities; however their primary mission was to survive and return safely with useful intelligence about the enemy.

According to the Igaden, “No battle can be won without the use of shinobi, and every general uses them.” The work of the shinobi was very important, and often a matter of life and death.

But no matter how skilled the Ninja, no matter how much they risked their lives to secure intelligence, unless this was put to good use by their master then their efforts would amount to nothing. The Master and the Ninja operated as an inseparable team.

In order to survive the Ninja had to master many skills. The Bansenshukai written in the 17th century is a compendium of the knowledge and skills that a Ninja must master. These included not just the techniques of Ninjutsu, but also Ninja philosophy, astronomy, reading changes in the weather and seasons, herbal medicine, and how to make and use various Ninja tools. The Bansenshukai is a comprehensive set of 25 scrolls. The first part is dedicated to Seishin, the correct attitude and mindset of the Ninja. It emphasizes the importance for the Ninja of a mind grounded in the values of Nin Gi Chu Shin, Compassion, Justice, Loyalty, and Trust. Only after the spiritual side of the Ninja is understood does it address the practical aspects of Ninjutsu.

“The character for shinobi 忍 contains the elements of the Ninja spirit, a blade 刃 over the heart 心, representing an imperturbable mind under any circumstances. The idea of surviving through endurance and keeping the ego in check is considered an important traditional value in Japanese Culture, and it is expressed here too at the core of the Ninja spirit. To truly understand the Ninja, we must know not only Ninjutsu, but also Nindo the Way of the Ninja Spirit. To know this is to know the spirit of Japan and the Japanese people.”

This is what draws me deeply to the Ninja Culture.

A Ninja Scroll from the home of Yokoya Sakon, a Sanada Ninja. 太刀目抜銀 (tachi menuki gin), meaning silver decorative sword hilt, is the phrase that appears near the upper center of the scroll. The style of writing reflects characteristics of the Ninja which are distinctly different from Samurai calligraphy.

Reading the Ninja Spirit through the Brush Writing of the Ninja

Let’s take a close look at the calligraphy writing in the scroll. This scroll is in the possession of Yokoya Shigenori, a descendent of Yokoya Sakon, a Sanada Ninja who served under Sanada Masayuki and Sanada Nobuyuki, two generations of the Sanada family. The phrase 太刀目抜銀 (tachi menuki gin), meaning silver decorative sword hilt, is written in relatively slender strokes and in the Kaisho or block style of writing, probably because it was meant to clearly convey information to future generations. The clean vertical strokes and careful writing style give an indication of deep concentration. Moreover the smooth entry and smooth exit of the slender horizontal strokes which are reminiscent of the way that ninja might move into and out of a space. It is particularly easy to feel this if you attempt to copy the writing yourself.

The first and second stroke of the character for 目 are the written without connecting the strokes, which in graphology is an indication of openness to outside information, and when the strokes are also not connected at the bottom of the character this indicates the tendency to pass on such information once received.

These openings at top and bottom of the character indicate an openness and flexibility that comes with communication ability. The Ninja needed to be able to penetrate into the hearts and souls of people, and this is expressed in the way the characters are written.

For the character 貫 the first and second strokes are also open, whereas for the characters 母 and 目 the strokes are closed at the bottom. This indicates the ability to protect information received, to gather, condense, defend, and convey it when the timing is right. The strokes in the character for 刀 are all closed, suggesting the tight keeping of secrets.

While these characteristics may seem opposite, being both open and closed, it seems appropriate that a Ninja would need to be able to do both according to the demands of the situation.

The right sweeping stroke in 太 is rather long, a characteristic found in the handwriting of people who are able to stick to something and see it through. This would certainly be an important mindset for a Ninja who must at all odds survive and bring the needed intelligence back to his Master. Both the left and right hand radicals of the character 銀 have strokes cutting across other strokes, when this is not the way it is normally written. In graphology this characteristic appears often in the handwriting of people in trades such as hairdressers who use scissors, or among Sushi Chefs who use a knife. How interesting to also find it in the writing of a Ninja. 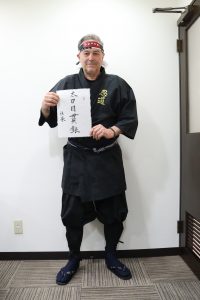