HOME >  Feature Articles >  【Series of Budo Essay vol.1】The Best Way to Learn BUDO: Is It Still Best to Learn It from Japanese Masters？ [First Half] 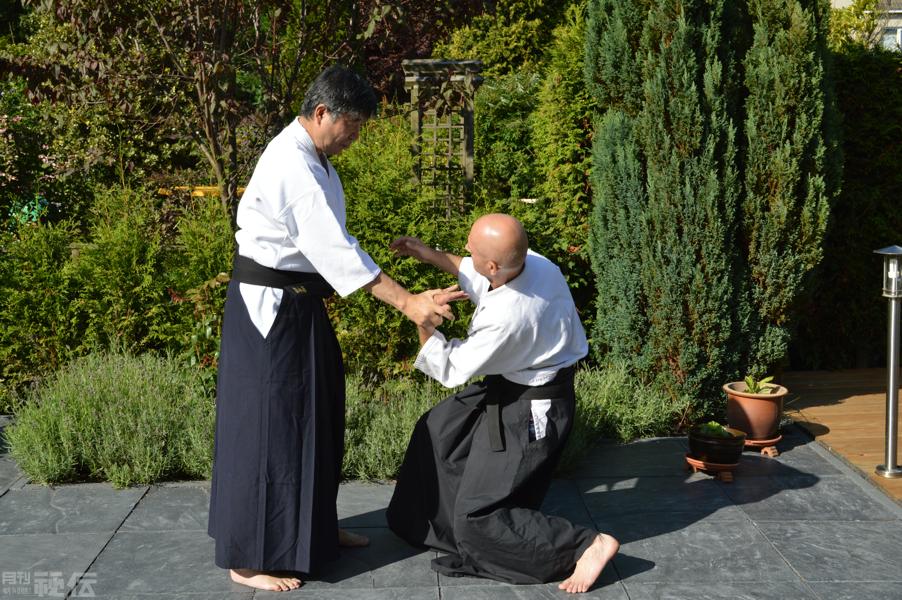 At starting the series of articles by Budo Japan

From this month my two series of articles, 1 series of Budo Essay and 2 series of Jujutsu KUDEN will start by the website Budo Japan which is operated by BAB Japan Co., the publisher of a Japanese martial arts journal “HIDEN”.

For the past 30 years, based in Europe, I have been engaged in the spread of Japanese traditional Jujutsu which is said to be an intangible cultural heritage of Japan. In Europe, fighting sports called Jujitsu or Jiujitsu is popular, and the population learning it is probably more than ten times as the population learning Jujutsu in Japan. European Jujitsu is classified into two, one is a traditional European Jujitsu originated from the arts they learned from Japanese Jujutsu masters who visited Europe in the beginning of the 20th century. And the other one called as modern European Jujitsu was created as a simple mixing of Judo and Karate by those who studied both since 1970s when both have become popular in Europe.

Both of them are spelled not Jujutsu but Jujitsu or Jiujitsu, which look strange from a viewpoint of a Japanese because those words are not Japanese. The former has lost a lot of valuable know-how of Jujutsu but the basis is still Japanese Jujutsu and we Japanese still recognize them as a Jujutsu. While the latter is simple power techniques which they added kick and punch to Judo or wrestling techniques, accordingly we Japanese do not recognize it as a Jujutsu. And now both of them have no intercourse with Japanese Jujutsu. The traditional European Jujitsu has lost a lot of delicate and sharp original Jujutsu techniques in decades after the intercourse with Japanese Jujutsu masters had ceased, The actual situation is that the divergence from the original Japanese Jujutsu is getting bigger year by year.

I feel so regrettable on the current situation and have held open seminars in various places for the past 30 years to show people what is real traditional Japanese Jujutsu. As a result, I got the participation of about 30 people in total mostly from the traditional European Jujitsu people up to now, and have been teaching them the essence of Japanese traditional Jujutsu. Every time many martial artists have participated when I held open public seminars. Those participants were surprised by the sharpness of the original Jujutsu and even got a big shock when they saw and experienced Aiki techniques which they had never ever seen before. In spite of these facts, the number of people who came to receive my instruction afterwards was indeed small in spite of the fact I had done all those activity free of charge.

Now I have passed the retirement age, reaching the age of 70, I cannot move my body as I could do before, and the time that I can spend for actual physical instruction decreases year by year. Now, using my remaining limited time effectively I have to transfer real Jujutsu and Aiki techniques as many people as possible. To realize my mission, I have to increase the number of people who have sufficient and correct knowledge about Japanese Jujutsu and Aiki Jutsu, and concentrate my time and effort focusing on those people. As a first step to realize that, I decided to spread correct information on Jujutsu which is not well-known to European Jujitsu people. Fortunately, I received an offer from the editors of HIDEN journal, I decided to start the above two series by their website Budo Japan.

Due to that information spreading activity, I hope I can increase the number of the people who have correct understandings on Jujutsu. Then the chance they can learn real Jujutsu from Japanese Jujutsu masters who have the same mission as I may increase. Hoping it will happen, I start my series of articles from now on.

It has been over 100 years since Japanese martial arts, or BUDO, were first introduced in Europe. Since then, BUDO has attracted a great number of martial artists in the West and has made an enormous influence on the fighting sports of the world. One of BUDO, Judo, became so popular around the world that in 1964, it joined the modern Summer Olympic Games in Tokyo. Other forms such as Karate, Aikido, and Kendo have also become popular BUDO worldwide.

In the early expeditions of BUDO missionary history, Japanese masters travelled to the U.K., France, and Germany to introduce BUDO to Europe. Miyake Taro-sensei, Tani Yukio-sensei, and Kawaishi Mikinosuke-sensei are all Jujutsu masters and pioneers of spreading BUDO. At that time in Japan, Judo, derived from Jujutsu, was becoming increasingly more popular. Accordingly, many Jujutsu masters joined the trend, and the presence of traditional Jujutsu dwindled. Some of these masters, however, really loved their art, could not abandon it, and so left Japan in search of new locations to revive Jujutsu. It was through the efforts of these pre-World War 2 pioneers that Jujutsu established a firm foundation with hundreds of followers in U.K., France, Germany, and Poland. 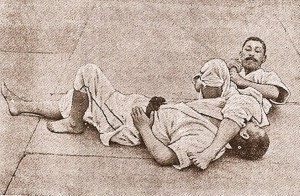 How Jujutsu Attracted the West

There were already many fighting sports in Europe including wrestling and boxing; so, why were so many people attracted to Jujutsu?

Jujutsu consists of Hit, Throw, and Control techniques. As a fighting method, its techniques are complete.

Jujutsu requires more skill than power. Since it is not meant for games, the difference in the weight of students is not taken into account as a handicap. Europeans saw small Japanese Jujutsu masters easily throwing big European wrestlers and were immediately attracted to the mysterious techniques from the Orient.

Jujutsu as a BUDO has an excellent curriculum and syllabus such as the DAN degree system with the white or black OBI (belt). Students can always see their skill level and, quite clearly, how to improve. This was not the case for any other European fighting sport.

When the Second World War started, the Japanese masters stopped visiting Europe, hoping their protégés would maintain the Jujutsu techniques they had learned. When the war ended, despite European wishes, the Japanese masters did not return. Back in Japan, most styles of Jujutsu went out of existence. Nearly all of the Jujutsu masters were killed in battle, and the Japanese youth were no longer interested in such an old, traditional BUDO. It reminded them of the militarism which landed Japan in its miserable situation and led to a strong hatred of BUDO. In this way, the traditions of Jujutsu died except for a remaining few followers. Those few survived by teaching their style to a limited number of students. Those survived Jujutsu masters no longer had the willpower or motivation to take missions outside Japan.

Japan’s economy eventually recovered, and the nation regained its vitality in the 1970s. Many Judo, Karate, and later Aikido masters went to Europe and the United States to teach their specialties. As with Japan in the past, the major study of BUDO was replaced by these new derivatives of Jujutsu. Nevertheless, a number of Jujutsu practitioners still continued in Europe. Their population had grown much larger than that of their counterparts in Japan, where Jujutsu only existed as a traditional symbolic art. After the departure of the Japanese masters from the West, the study of Jujutsu had continued to develop in Europe. This style has come to be known as European Jujutsu. Unlike Gracie’s style, which many do not regard as a traditional Jujutsu, European Jujutsu has a direct link with the original Japanese style and is considered to be descended from the traditional schools.

It is easy to learn BUDO. One simply finds the local school in one’s own town and starts BUDO training. There are numerous schools for Judo, Karate, and Aikido in every country. Anyone who wants to learn these BUDO can even find a local teacher with higher Dan degree (e.g. 4th or 5th) without difficulty. So, for those living outside Japan, now is an exciting time to learn BUDO. 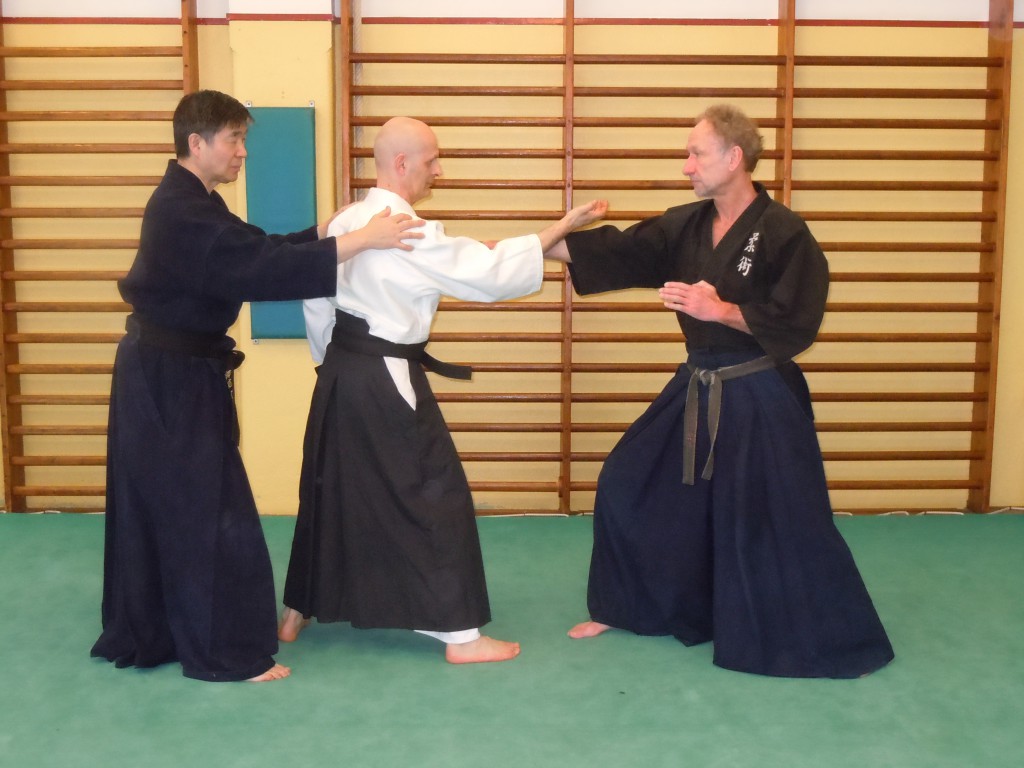 Even in this day and age, however, we still hear wishes to study BUDO under a Japanese master. What is their motive? Do they expect that they can learn something from Japanese teachers that they can not learn from locals? Is it true, or is it just an illusion? I classify that desire into two motives:

It is interesting that Westerners consider the spiritual aspect so important to achieving a higher level. For the Japanese, this is not the case. Even though we practice BUDO to achieve spiritual calmness, BUDO training is not a goal but a means to achieve this. I believe this is the important key for why it is so difficult for western people to attain spiritual calmness. For so far as they think it is a means to attain higher technique level, they will never find the way to get it.

As for the first motive, fewer people now believe this. In the case of Judo, Western Judo-ka win more matches than Japanese Judo-ka. Consequently, they believe Japanese Judo-ka are no longer as superior as before. They do not feel they need to learn Judo from Japanese masters.

The interesting point is the second motive. Many Western BUDO-ka still believe they can learn excellent techniques which are backed up by a high spiritual calmness only from Japanese masters. This desire shows up often in martial arts movies. The most famous of these films is KARATE KID. 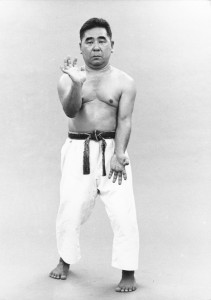 To be continued to [Second Half]