Ude Sankaku Seme Renko is also a very essential Jujutsu technique which is contained in almost all Jujutsu Ryuha (styles). It is also called as Hichiri Hiki which means “arrest for seven miles”. So by using this technique one can control another and bring him along for even seven miles. But, the same as with the other such techniques it is seldom performed correctly by non-Japanese, or even some Japanese Jujutsu people. Because of their incorrect technique, they could never bring the other for even 100 meters. Hereunder I explain its know-how.

How it is performed by many people (The last Kime, or lock, is not the proper way)

There are many different ways to enter into this technique, so please focus only on the way the last Kime (lock) is done. 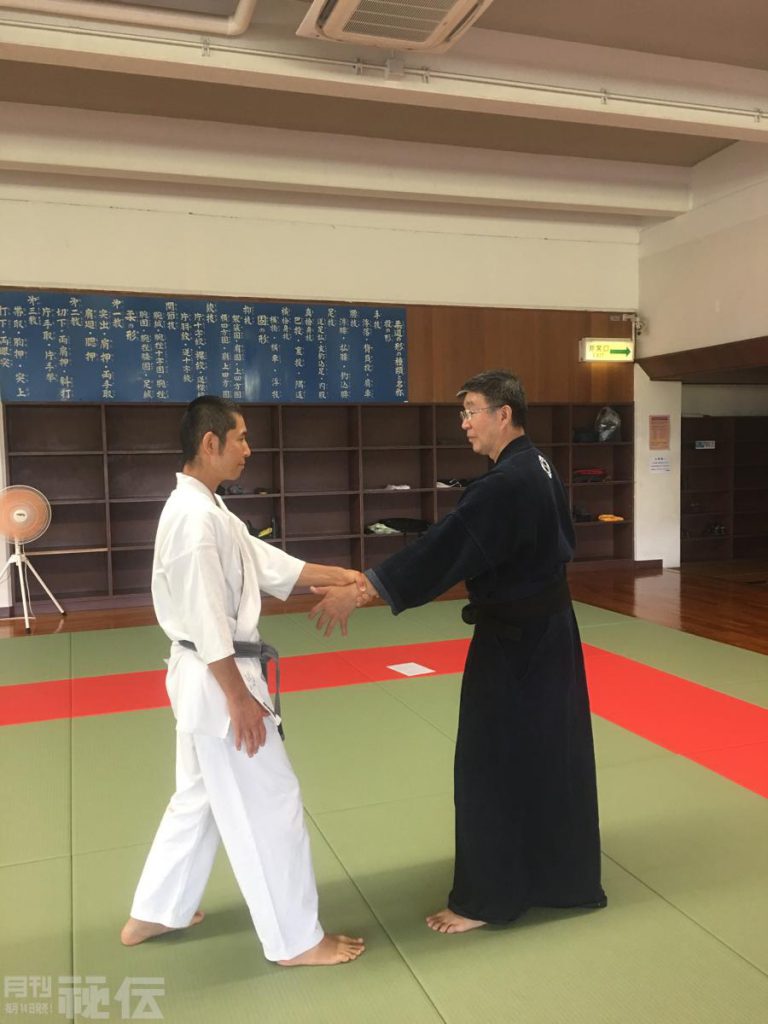 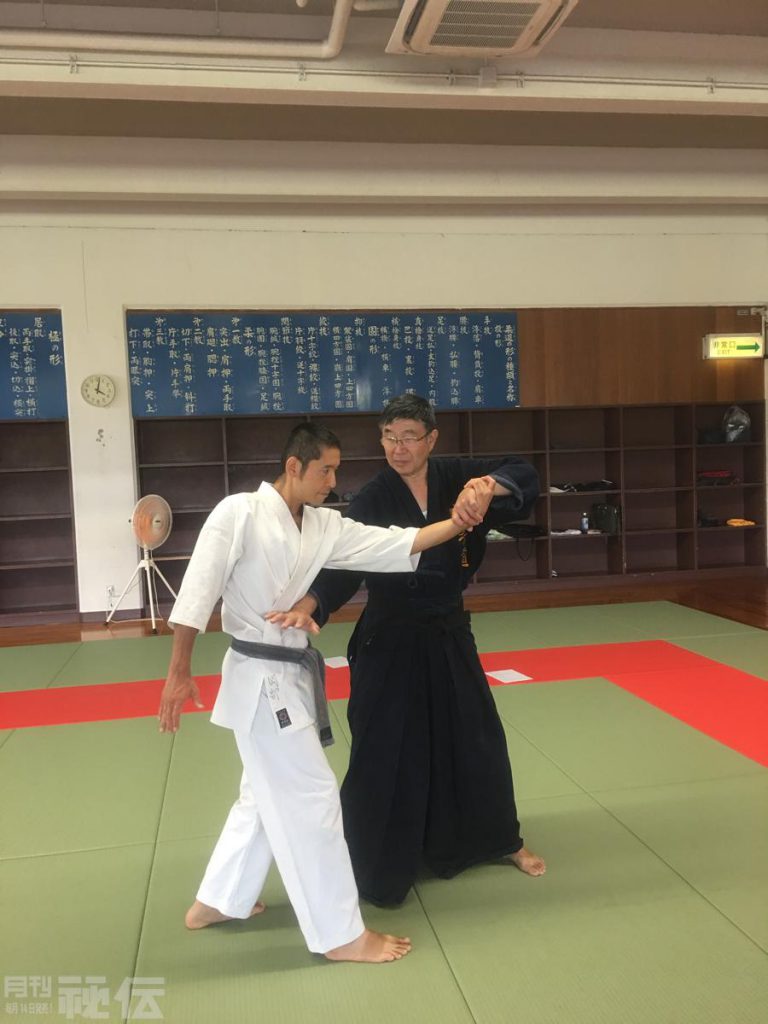 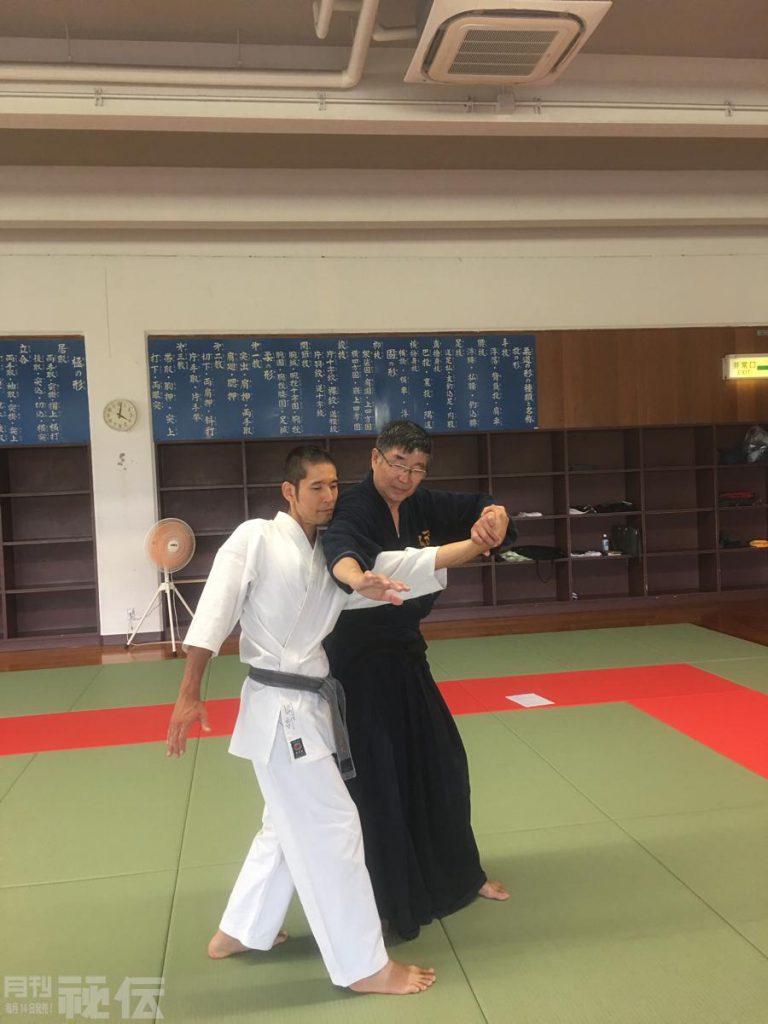 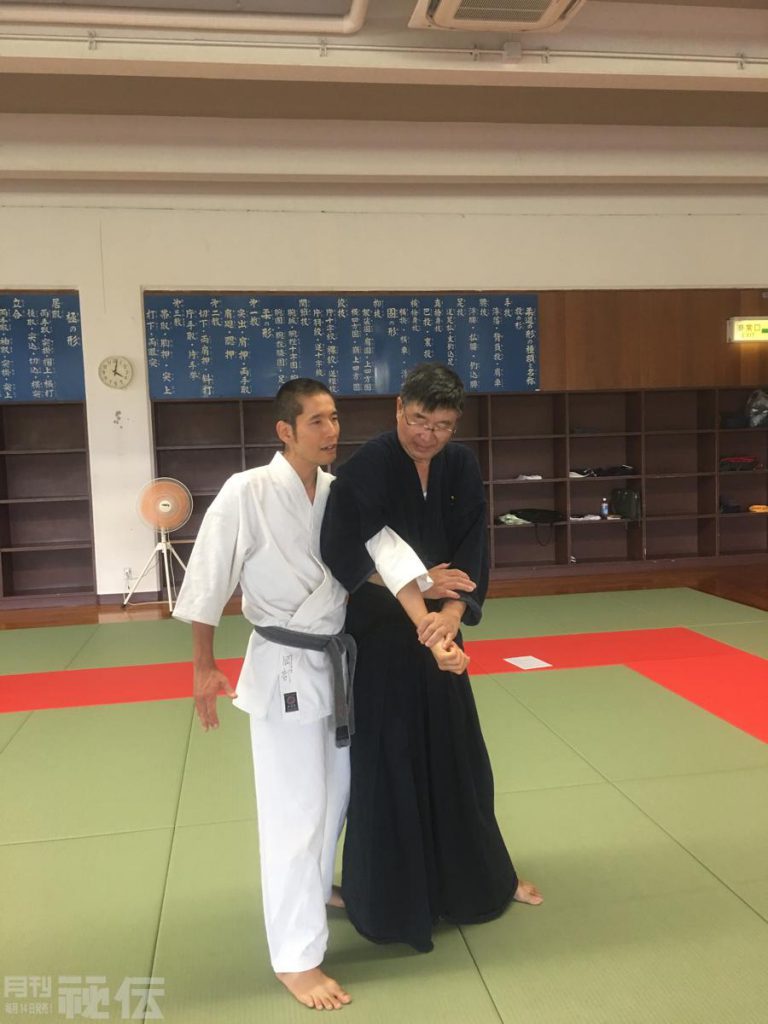 Fig-4 Tori controls Uke by reversing the direction of the elbow joint and locking it. They often put the right hand onto the left lower arm to strengthen their elbow pushing power. So, this last Kime is wrong and the correct Kime is shown by Fig-5. 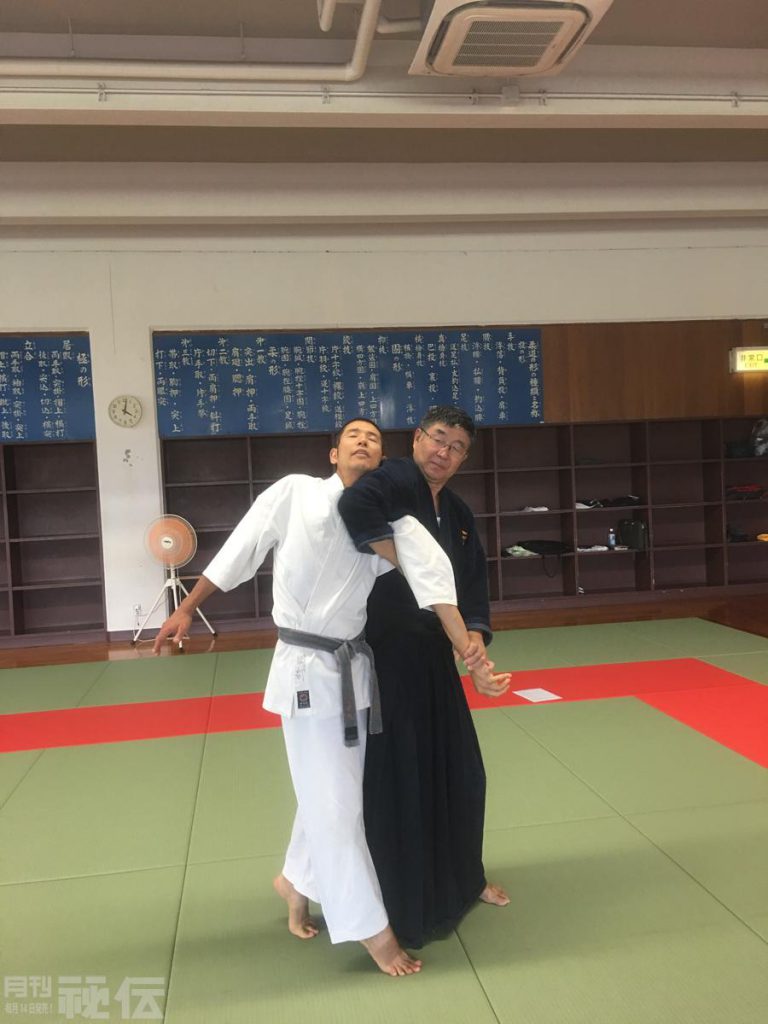 Fig-5 This is the correct Kime, or lock. Please compare with Fig-4. The clear difference is Uke stands up on their toes because of the pain, but in Fig-4, they do not.

How to control the other

In almost all the cases shown on Youtube, Tori pushes Uke’s elbow joint reversely to control Uke, which is not correct. Although it causes Uke’s elbow enough pain, it does not cause sharp enough pain to arrest, or escort him for seven miles. We can recognise the wrong case very easily because in most cases they place their other arm under the controlling arm so that they can push Uke’s elbow stronger, as shown by Fig-4.
The point to be targeted in this technique is not elbow, but a Kyusho (weak point) just behind the end of the upper arm (triceps muscle), close to shoulder. You can search for this Kyusho point yourself, as shown in Fig-5,6, 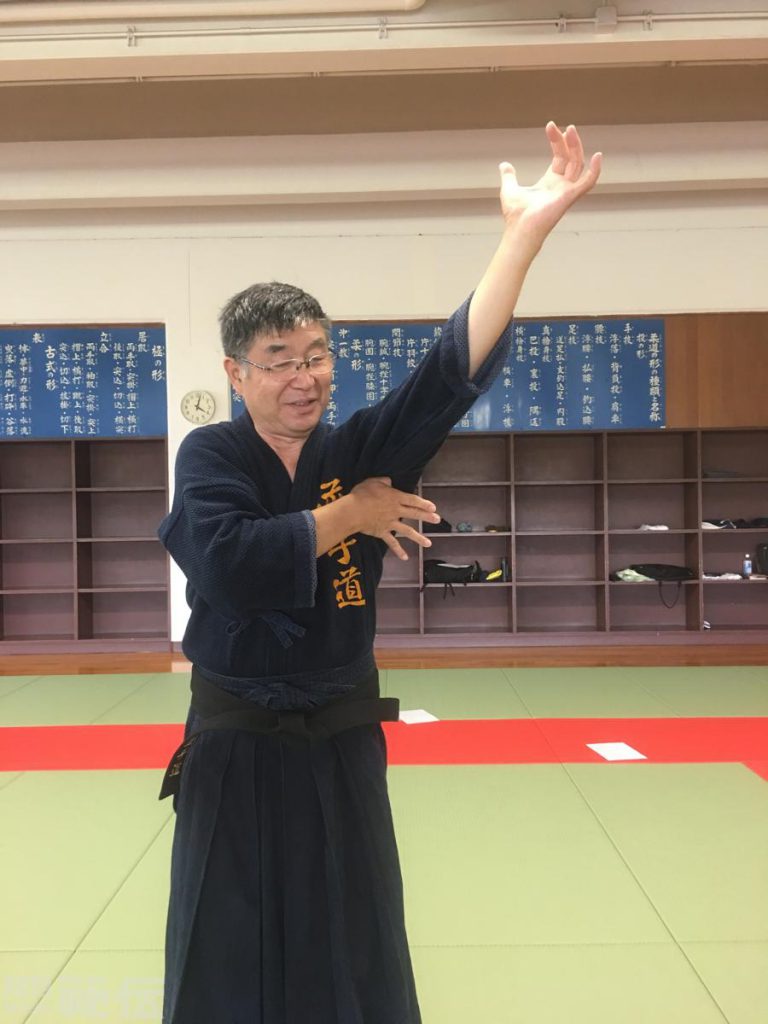 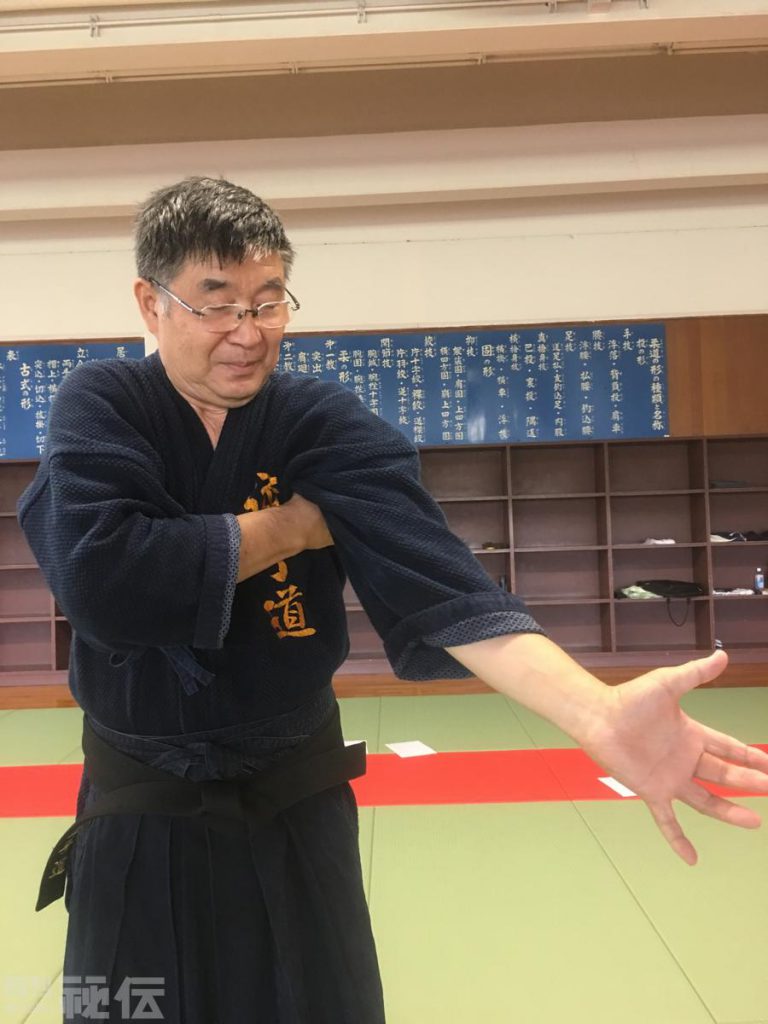 Fig-5 Fig-6 If the right hand is put on the Kyusho point, the left arm cannot move down any further because of the pain caused at this Kyusho point.

In the case that Uke is taller or standing higher than Tori, this technique becomes quite difficult to do in the normal way. There is a special “know-how” which is applicable for such a case.
As shown in Fig-7, when Tori wraps his arm over Uke’s upper arm, he turns more clockwise, so that his right foot becomes closer to Uke’s left foot, then Kime shall work. 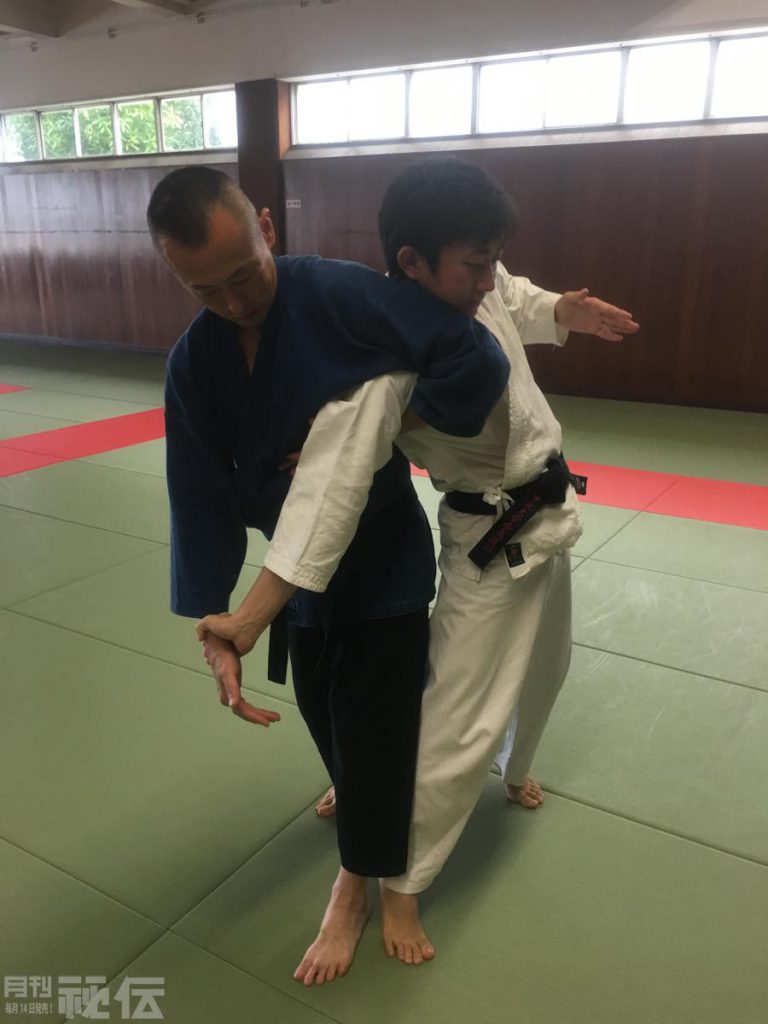