The technique called Tekagami Kote Kaeshi (hand mirror wrist turn) is a very basic technique utilized in Jujutsu, and accordingly, every Jujutsu RYUHA (style) has this technique in their curriculum. Its name came from how the grasped hand is turned. Namely, one turns the grasped hand like ladies turn their hand grasping a compact mirror when they want to look at their faces in a mirror.

I often watch this technique being performed–mostly by non-Japanese people on Youtube–and I seldom find anyone performing it correctly. This technique is so simple, but should also transmit several very important details. No one can master this important knowledge by just watching the someone’s video and copying it.

Hereafter, I would like to explain this important knowledge, step by step. 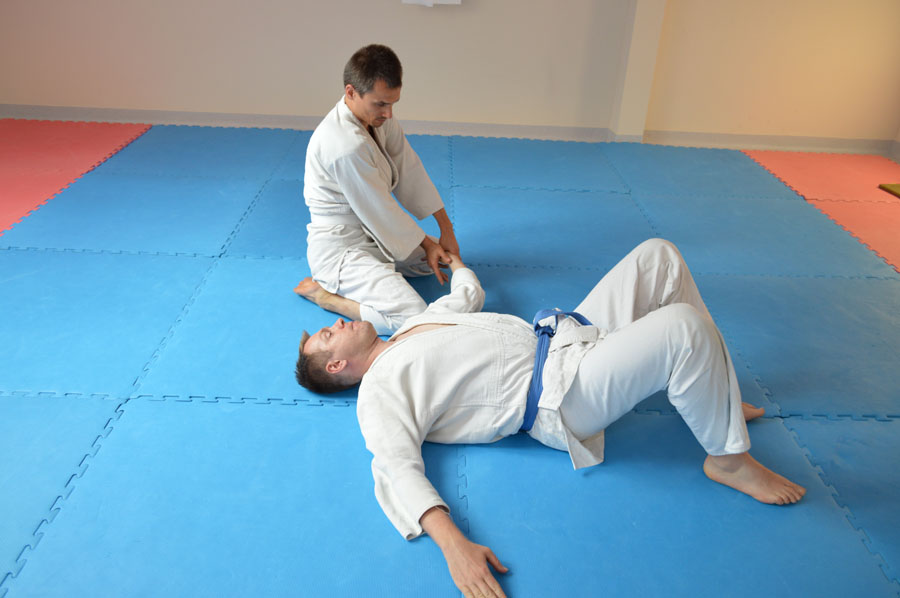 From the very starting point, almost all performances demonstrated by non-Japanese people are wrong. They just turn their hand smoothly. This cannot be done unless they can use Aikijutsu and they never appear to do so. It means Uke does not hold Tori’s wrist seriously (with real intent) and does not resist nor block the hand turning motion of Tori at all. In this way, people can never learn important knowledge. Uke must grasp and hold Tori’s wrist as strongly and tightly as possible, so that Tori cannot turn his hand easily. Tori should use special know-how to turn his hand in this situation, and so starts trying to discover such knowledge. 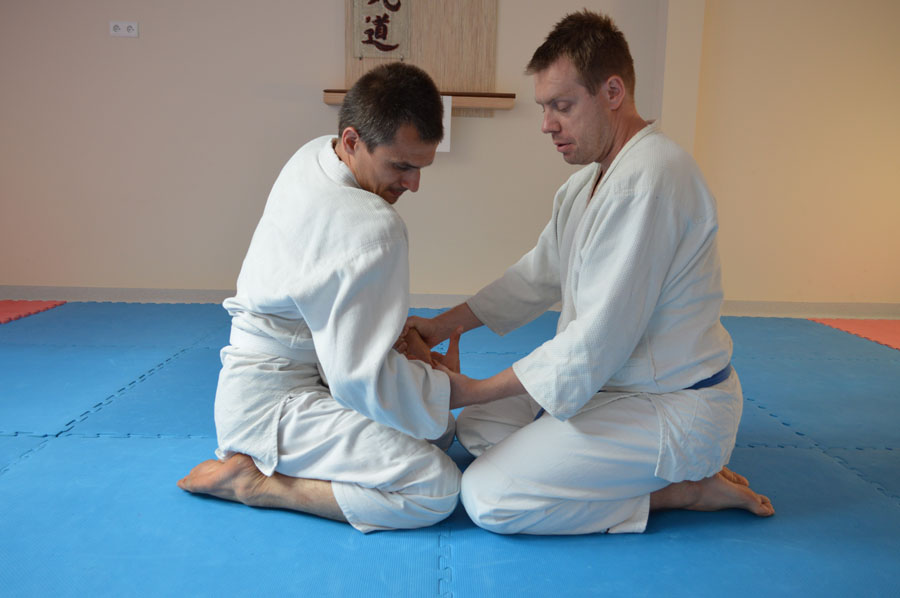 It is the knowledge to turn their hand being held strongly by the wrist that Tori bends and pulls his hand inside to make space within Uke’s grip and to give tension in his grasping left hand. Also, Tori must pull their hand from the small finger side, which is good at pulling. Never pull all the fingers together at once, just start pulling with the small finger. Only in this way can Tori pull his hand towards the inside using less power, which means easily 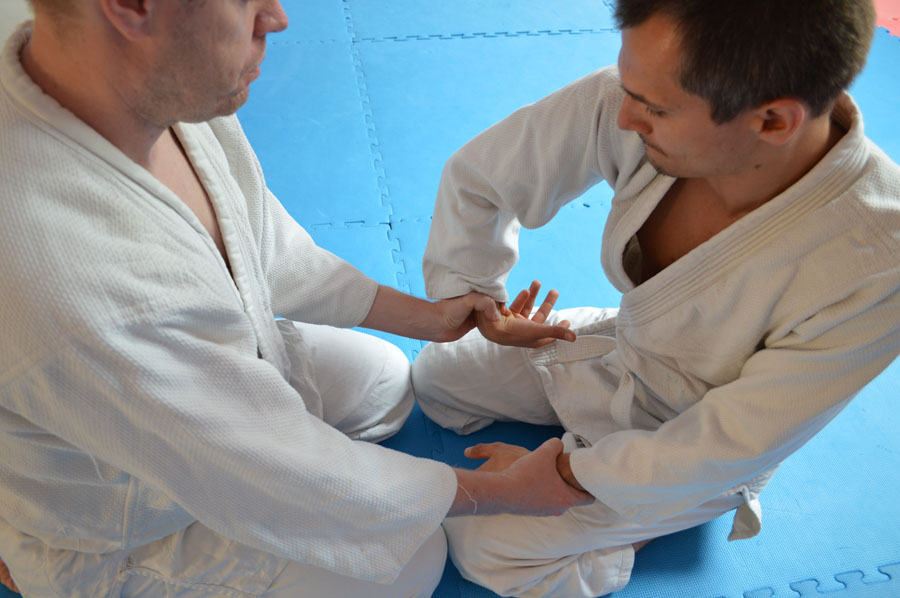 Fig-3 How to pull the hand starting with small finger

This is also quite an important part and seldom performed correctly in many demonstrations shown on YouTube. Tori starts raising up his hand and grasped wrist until it reaches about shoulder height. Then, in most of the cases I saw, the stress on Uke’s hand becomes loose and Uke can escape if he wishes. I can see this situation by watching the posture of Uke’s upper body.   It is very important how Tori continues to apply stress on Uke’s hand and arm until the end of the upward pulling motion. 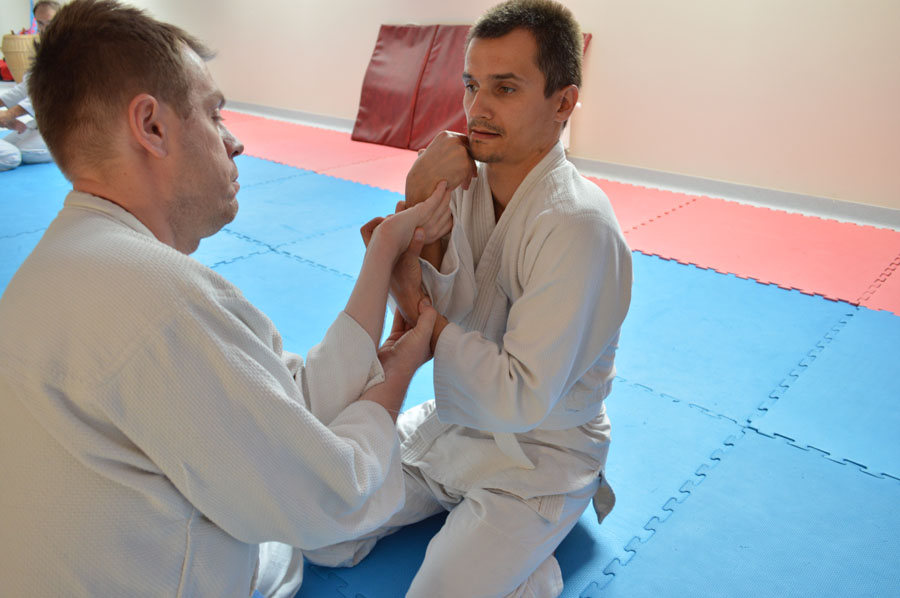 Fig-4 Wrong example: Now, Uke feels no strong stress within his left hand/arm and can easily escape from Tori’s grip. This is the same as shown in Fig-6 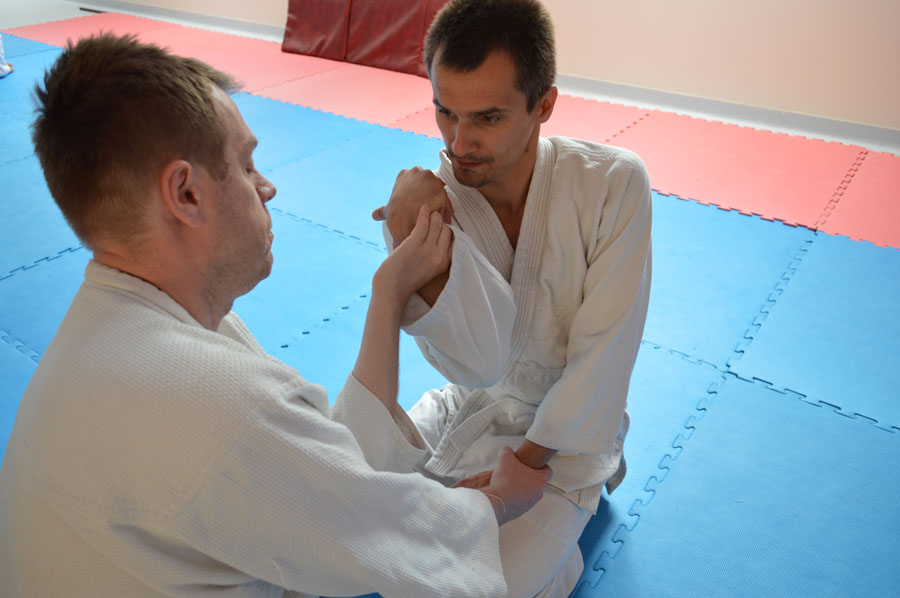 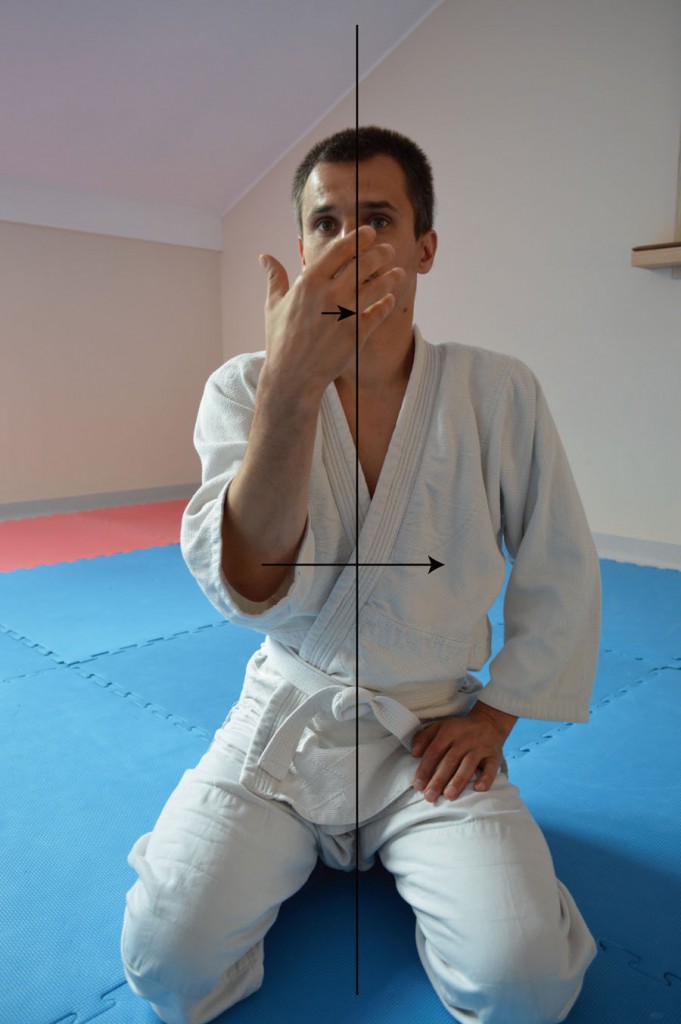 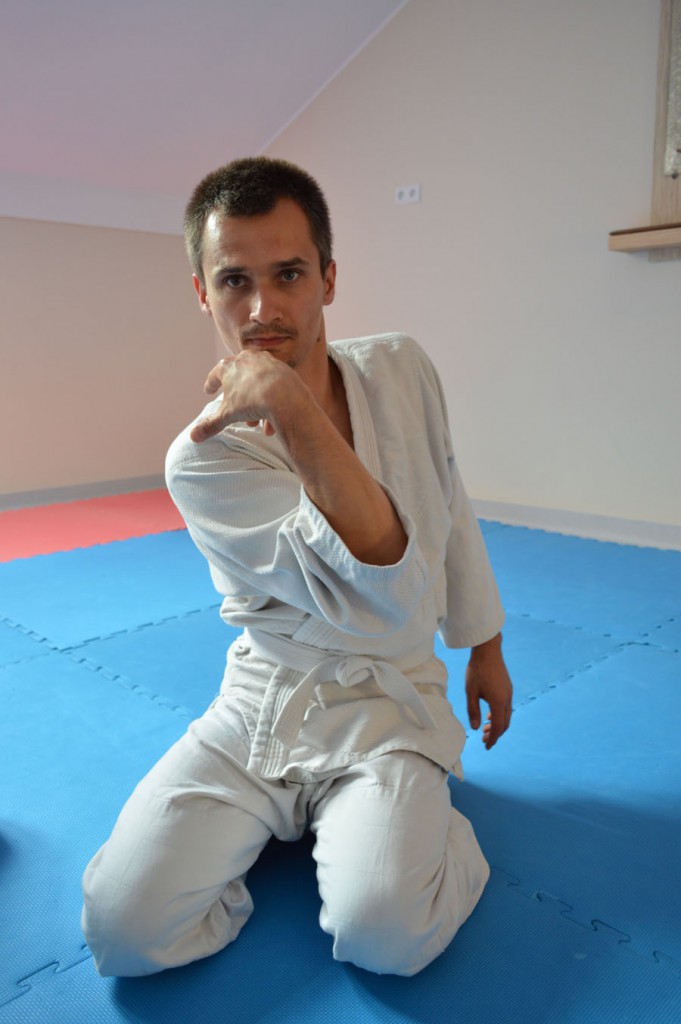 The pulled-up hand should be kept in the body’s center-line, while the elbow should located shifted inside from the center-line as explained previously, as shown in Fig-7. Never position the hands to the throwing side, which is performed in most cases shown on Youtube (as shown in Fig-6).

How to throw Uke with Kote Kaeshi

Now the last part, how to throw Uke with Kote Kaeshi. Indeed, this is the most important point.   It is very important, but many people do not know that it is not necessary, nor needed, to use power to cut against Uke’s hand using Shuto (手刀), or their “sword hand”. If all the procedures are done correctly, Uke is thrown only by one finger cut, which means using only a tiny bit of power. Here, I explain the know-how to take Uke to the final stage where they can be thrown with only a small amount power.

From the position shown in Fig-5, Tori grasps the back Uke’s left hand from below, and keeping their hands along the body’s center-line, Tori pulls down both hands to their upper legs and releases his grasped right wrist, as shown in Fig-8. At this stage, Uke becomes totally unbalanced and leans to the throwing side. Then, it is quite easy to throw Uke by cutting down against his twisted hand with Shuto, which does not require power, as shown in Fig-9. 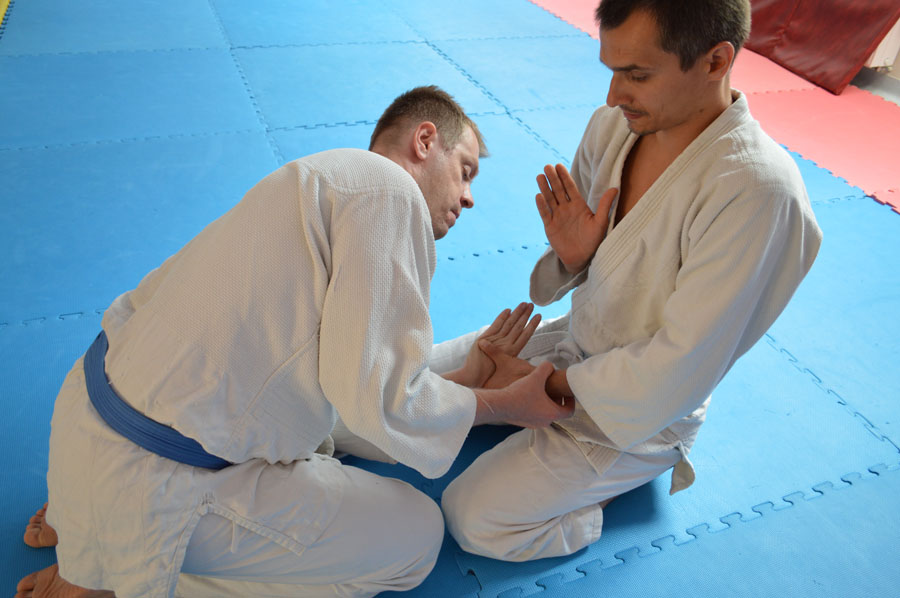 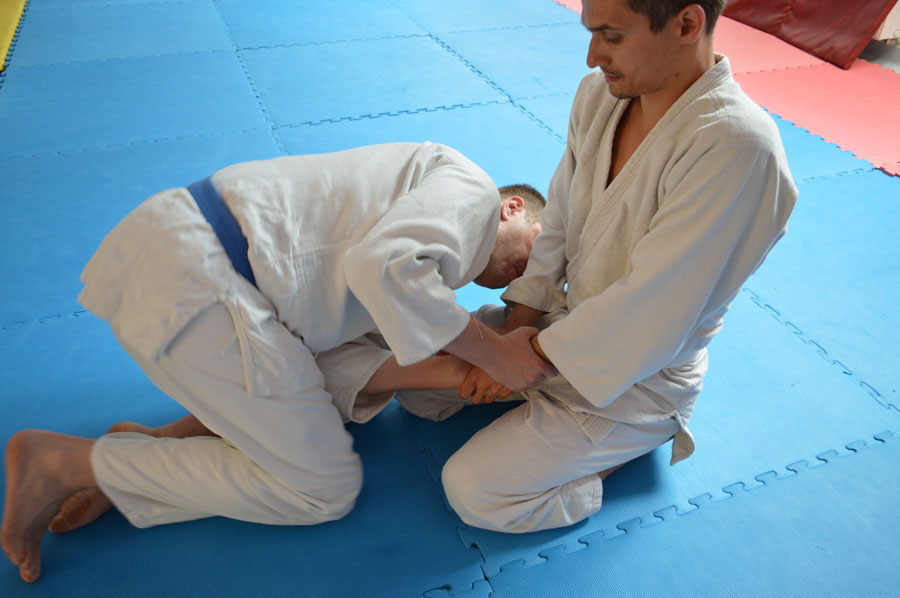 The last knowledge, how to control Uke after throwing them

For most of Jujutsu styles, controlling is the most important point, which should happen at the end of the technique. In this way, one can avoid the attacker’s violence without causing him serious damage.   For this technique, it is the most important to block Uke’s head with Tori’s right knee so that he cannot escape from Ude Hineri Kime (control by twisting arm), as shown in Fig-10. If this is not done, Uke can escape from Ude Hineri by spinning his body as shown in Fig-11. 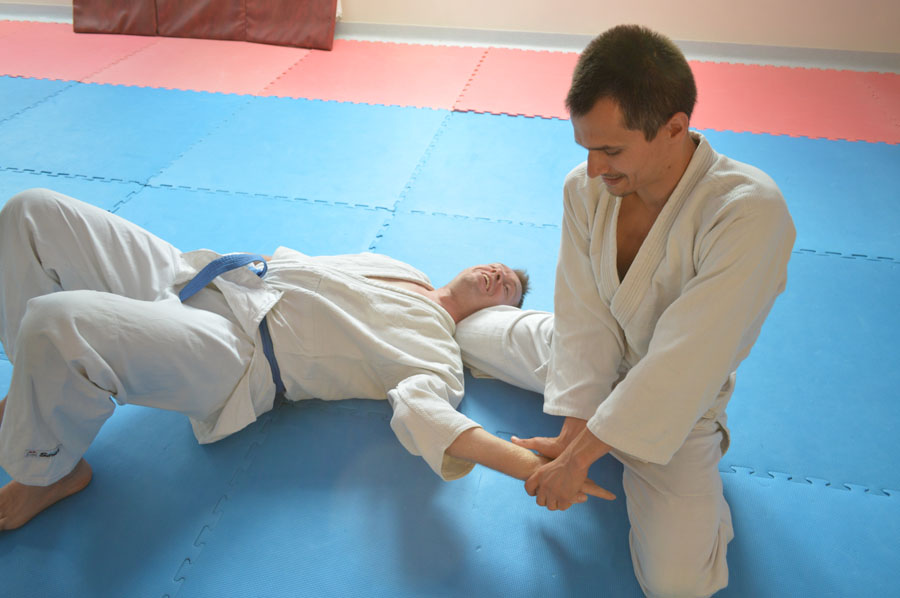 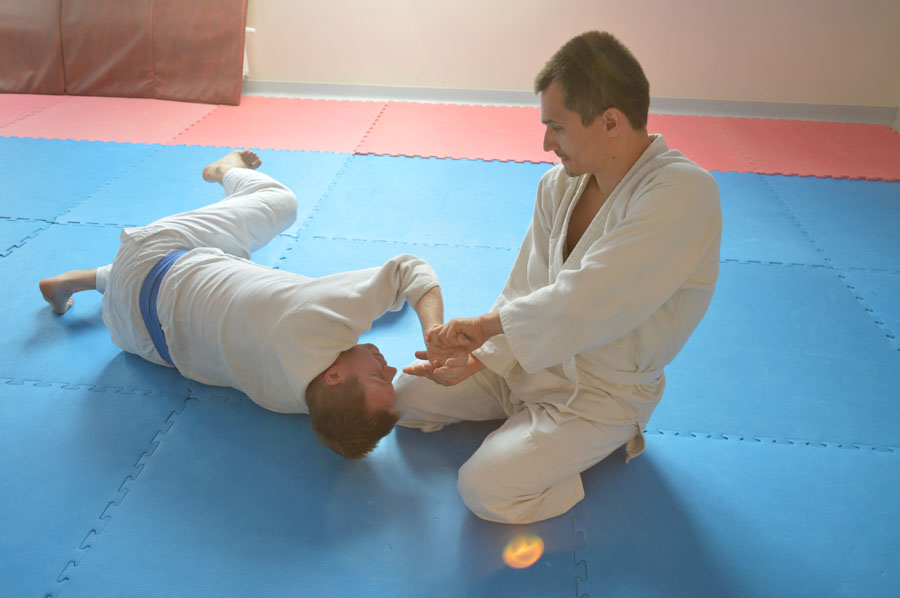