Since many Bujutsu (fighting systems) were established in Japan, teachers have used KUDEN to transfer special deep knowledge to their selected students, such as their successors.  The Japanese word KUDEN is translated as “verbally transferred knowledge”.  For every RYUHA (style, or school) they had special knowledge for almost all techniques and they did not leave this knowledge in writing to keep this knowledge confidential.  The teachers taught this knowledge verbally, only to the selected students whom they thought they could trust.  In this way they tried to keep the purity of their RYUHA and transfer it to future generations.

This is a quite common technique for most of Jujutsu styles （RHUHA 流派） and same as the other techniques it requires special knowledge to realize it successfully.  This technique could also be performed by using AIKI method which requires far much less power than original Jujutsu version. That option is explained here, either.

A. How it is performed by Jujutsu

Its name TENCHI means sky (heaven) and ground (earth) in Japanese. The name comes from the movement of the sky and ground being turned upside down when one is thrown by this Nage Waza.

First, the sequence of the technique is shown below:
Fig-1, A grasps D’s wrists with both hands (JYUN TORI). 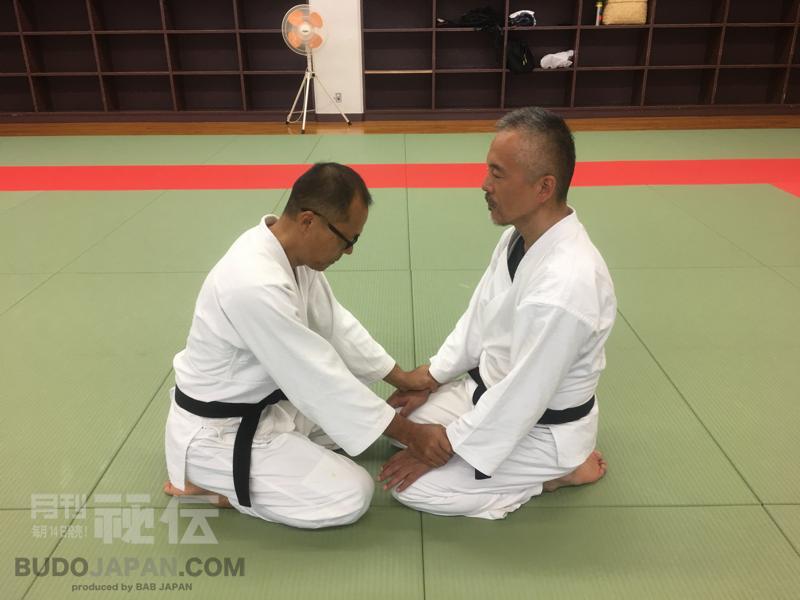 Fig-2, D puts his fingertips on his knees and pushes his wrists forward to unbalance A. 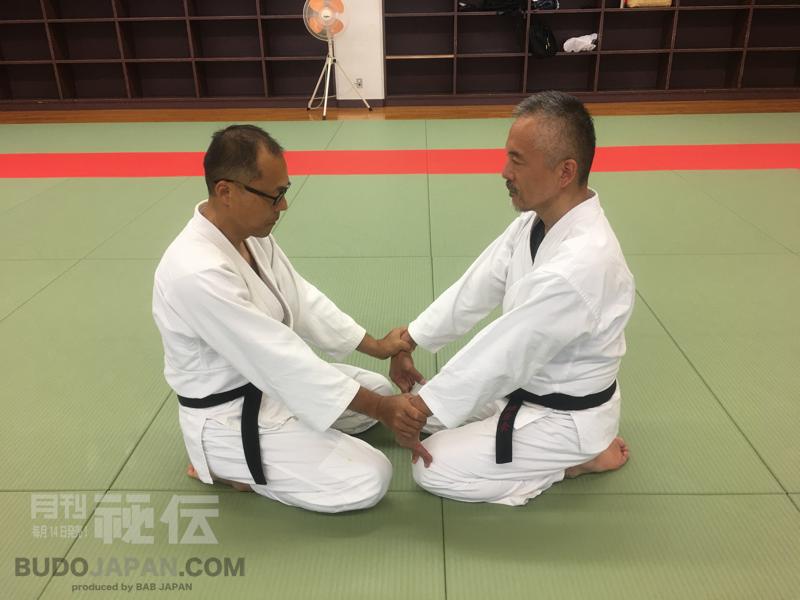 Fig-3, D pulls his left arm backward and immediately pushes his right arm forward to throw A to his left side. 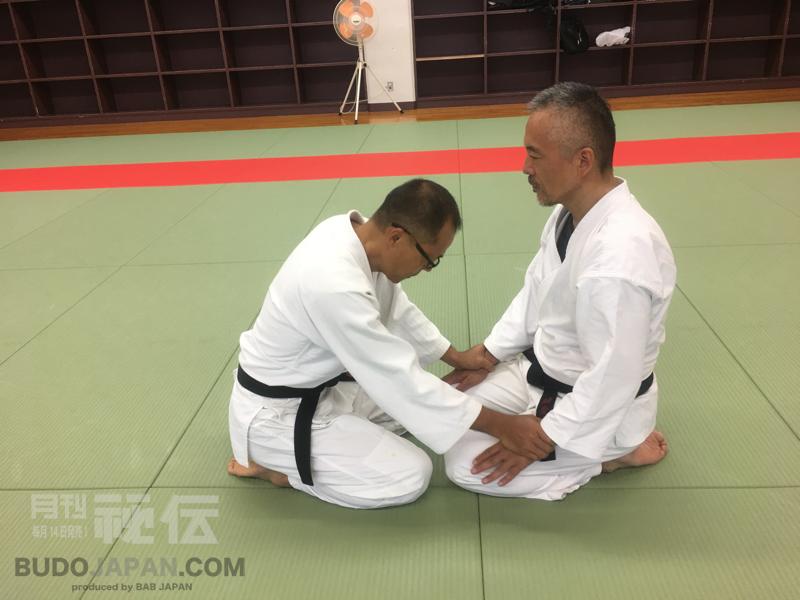 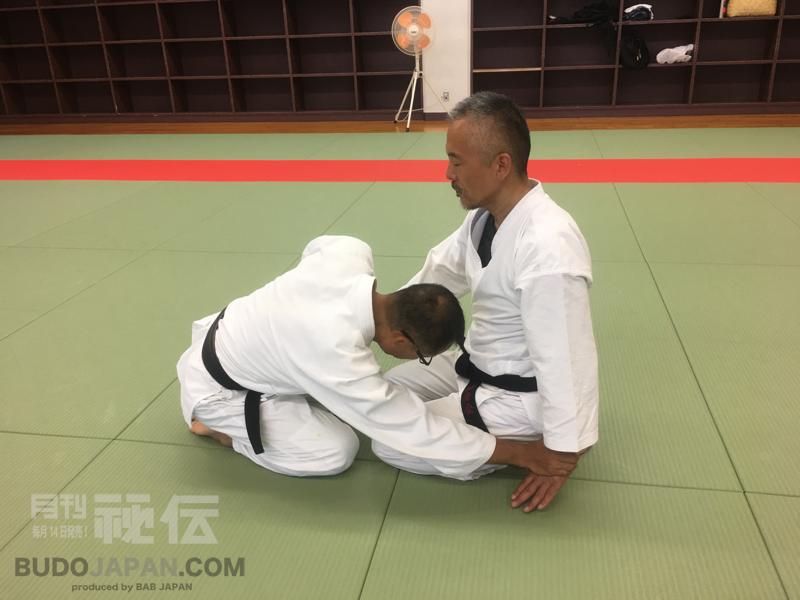 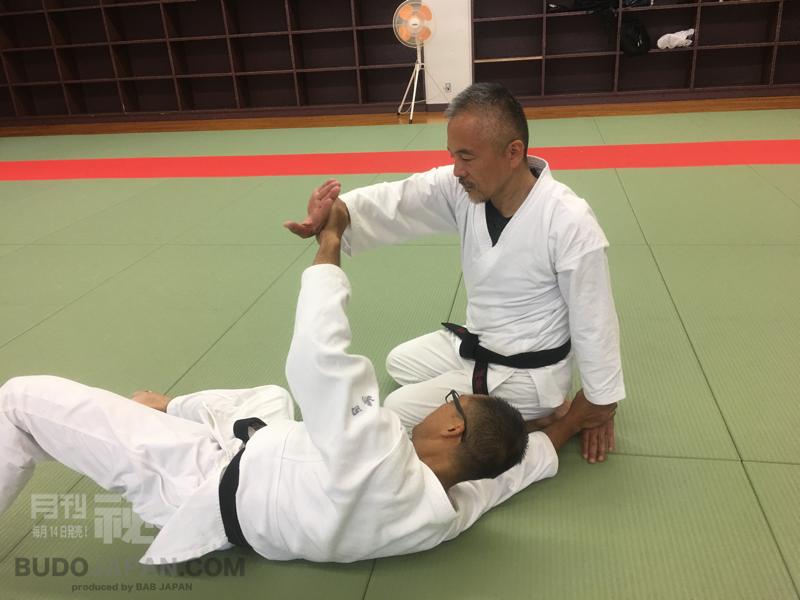 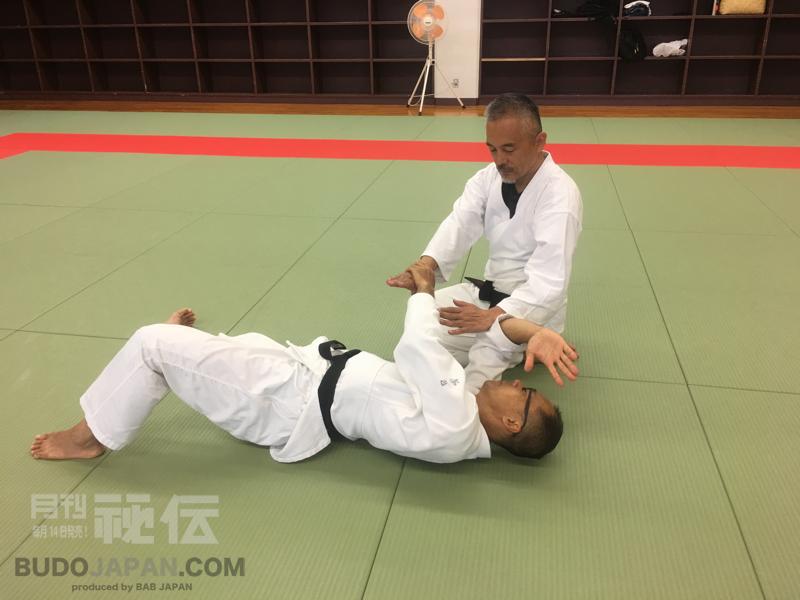 There are several points of knowledge to realize this light throw, and if all the knowledge should be completed perfectly–one after another–then finally, one can perform this technique well. If it works, one can throw the opponent as if his weight turns to just 1/10 of his original weight, and the defender(D) feels almost no weight of the opponent with his wrist/lower arm.

Kuden 1:     Move (unbalance) A’s upper body to the back through D’s lower arm motion by putting both fingertips on the knees as supporting points (fulcrums).  Then pull back both hands quickly to unbalance A. 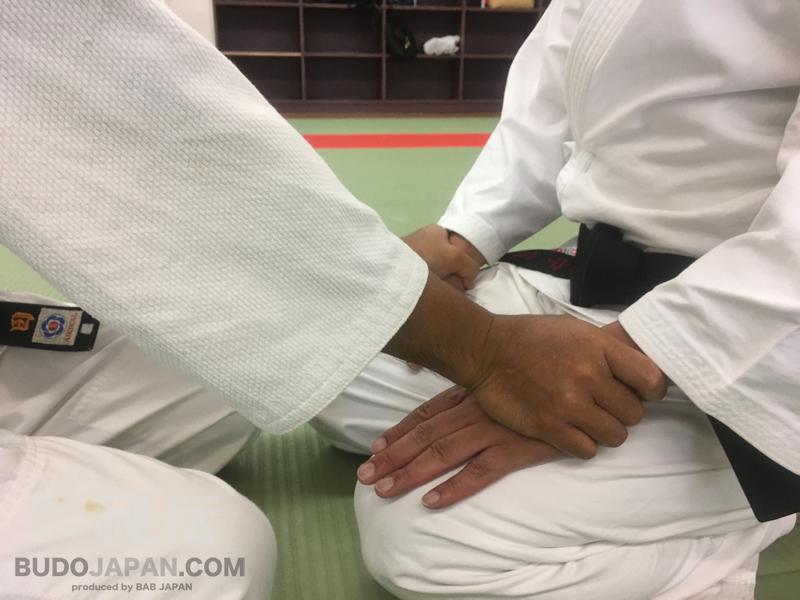 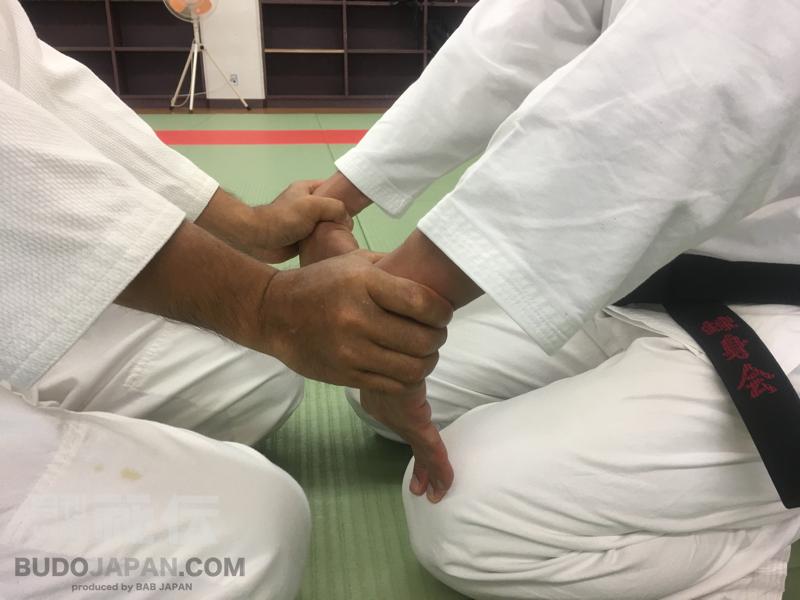 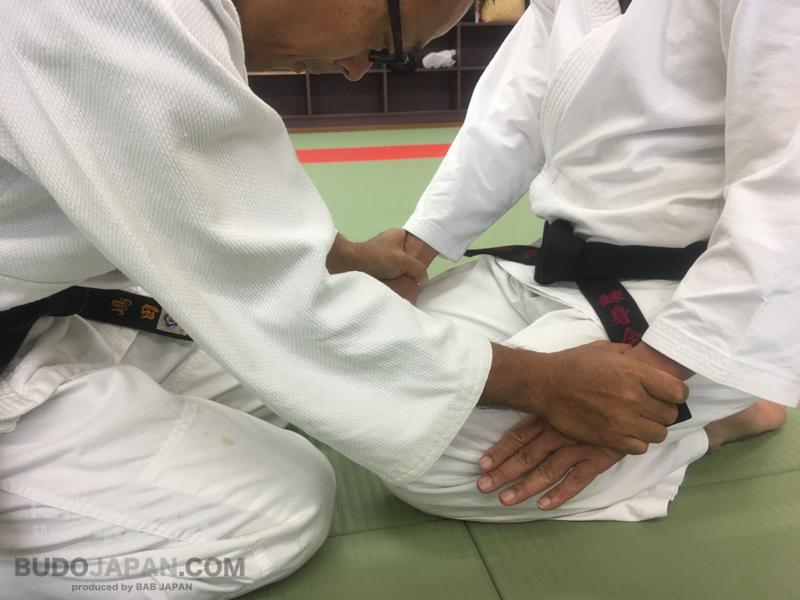 Kuden 3:   This pulling motion of the left arm should start slightly earlier than the thrusting motion of right arm, which is exactly a KUDEN.

If all those procedures are done correctly A becomes unbalanced enough with his whole upper body, and can easily be thrown by the upward motion of D’s right hand/arm.  Never make haste during this last throwing movement.  In most cases, people start the throwing motion while their thrusting arm is still on the way upward, which leads to a failure of the technique.

Further application of the knowledge (Kuden)

You can also realize the Kuden 1 without putting the fingertips on the knees, but by putting them on virtual fulcrums in air over knees. In this situation you move your lower arms forward and backward as if your fingertips are fixed on virtual fulcrums in air.  By this motion you can use your arm muscles exactly in the same way as the original Kuden 1. 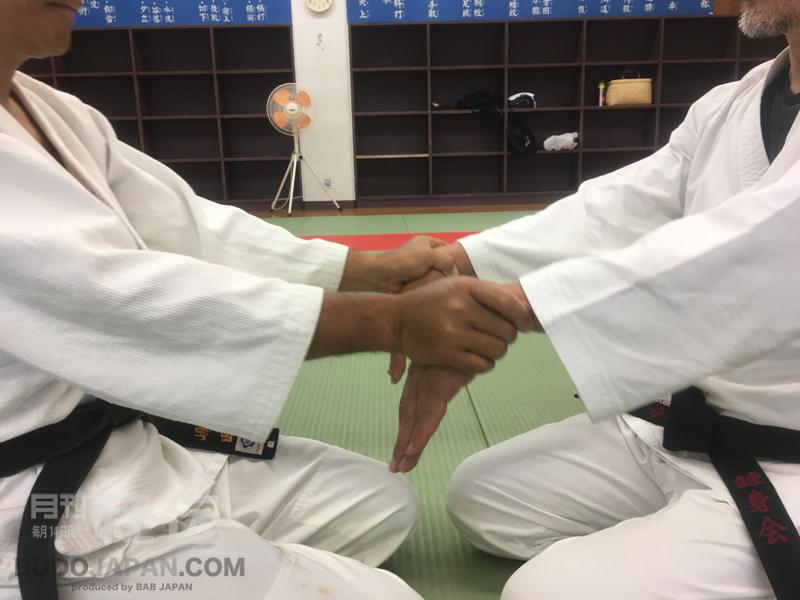 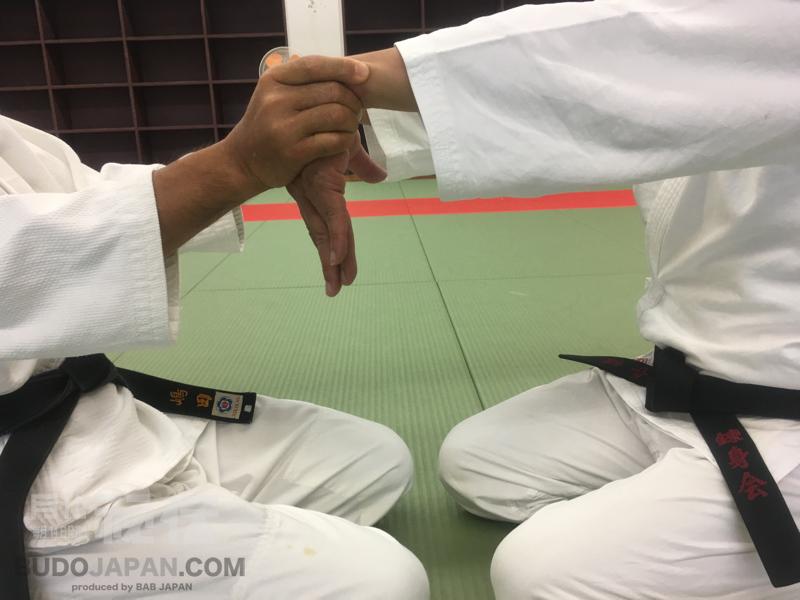 Otherwise one can just use limited muscles which does not create enough thrusting power to move the opponent forward and backward as shown by Fig- 11. 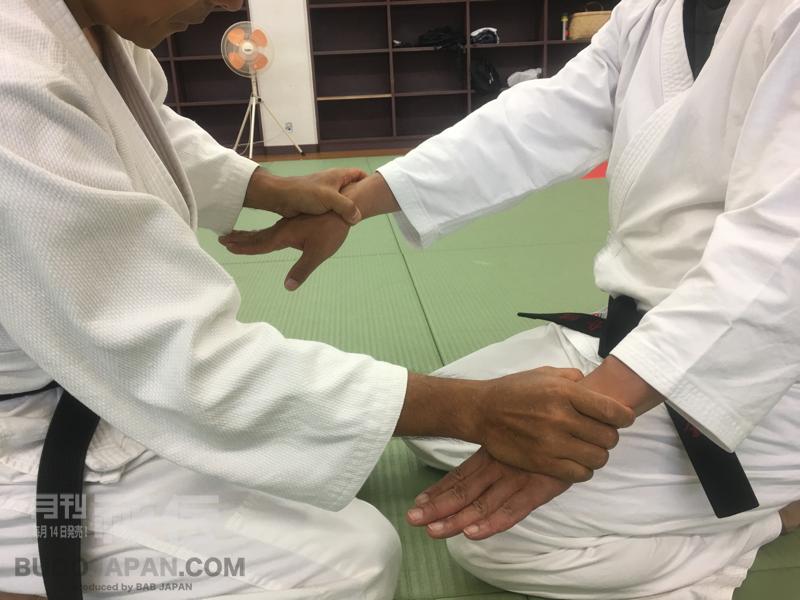 If one can apply AIKI to this technique, the starting Kuzushi (崩し unbalancing) becomes much easier, and can be done with far less power, which will surely surprise you quite a lot. Hereafter, it is explained how to realize it. By the way, I call this form of AIKI method-7, or  “AIKI mode”. 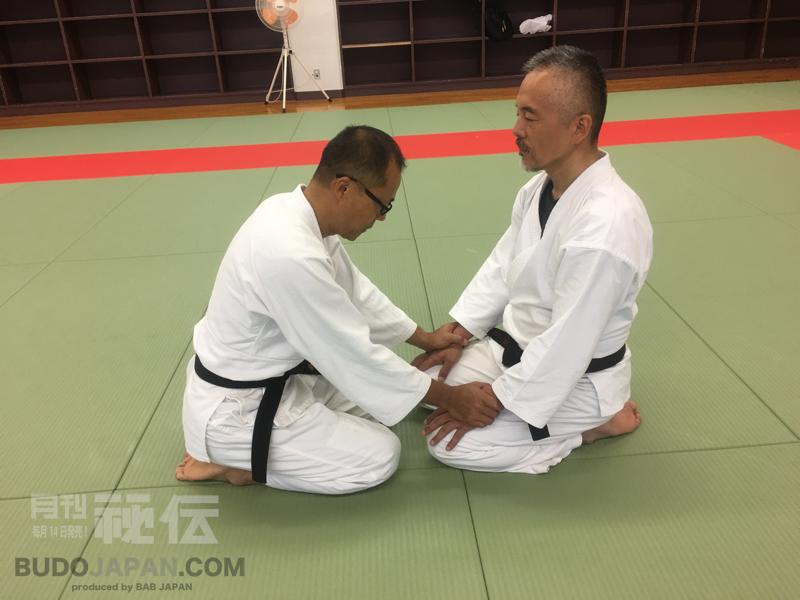 (2) D shifts himself into AIKI mode (i.e., set his brainθ wave mode), then A feels as if he is also thrown down in the same AIKI mode and loses his resisting intention.
(3) D just moves up his right arm and pulls his left arm backwards while keeping AIKI mode in his brain. 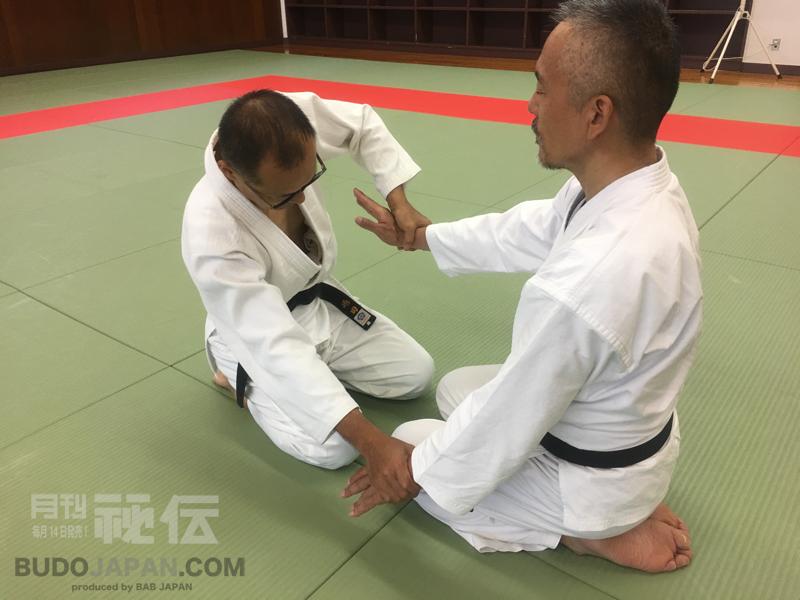 (4) A cannot resist this movement and is thrown to his right side.
At this stage it may be too difficult for everyone to realize this AIKI by “Aiki mode”.  I will find another occasion to explain this form of AIKI, which I call AIKI method-7, or “AIKI mode”. 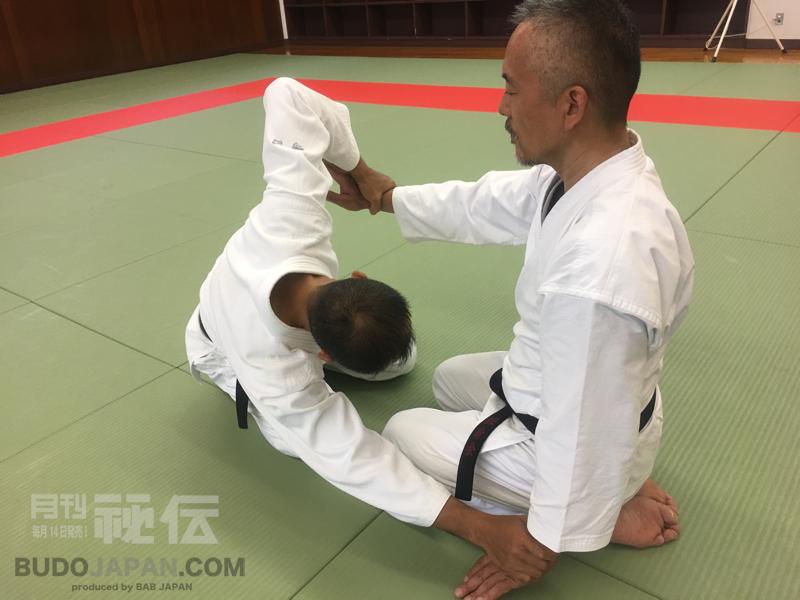 You can also watch this Tenchi Nage performed by Jujutsu and AIKI Jutsu.

Reference
“How to AIKI” written by Makoto KURABE, English version of “Dekiru AIKIjutsu 出来る合気術” published by BAB Japan in 2012