This is quite a popular technique and can be found in almost all Jujutsu styles. This time I will explain how to perform this technique using three different systems: A. by Jujutsu; B. by Aiki Jujutsu; and C. by Aiki Jutsu. I notice that outside of Japan, people tend to use the terms “Aiki Jujutsu” and “Aiki Jutsu” interchangeably, without knowing, nor understanding the differences of each system, and simply use the names because they sound nice. I really regret that such questionable behaviour has been spreading all over the world.

1)D (defender) raises both arms straight up.
2) A (attacker) grasps A’s wrists with both hands (JUN TORI).
3) D bends both hands downward in the same plane, as sharply as possible. 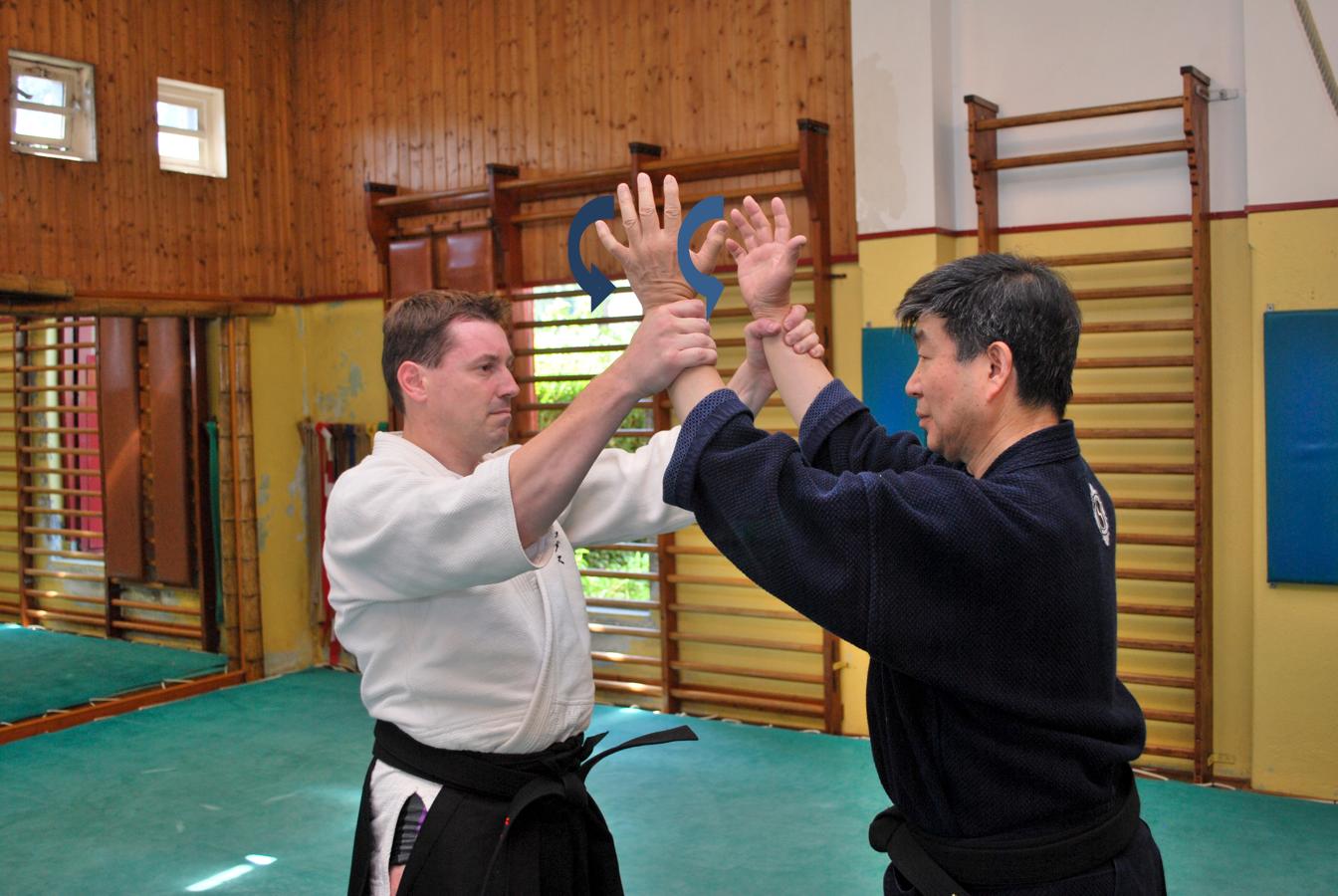 4) D pulls down both elbows close to his body. 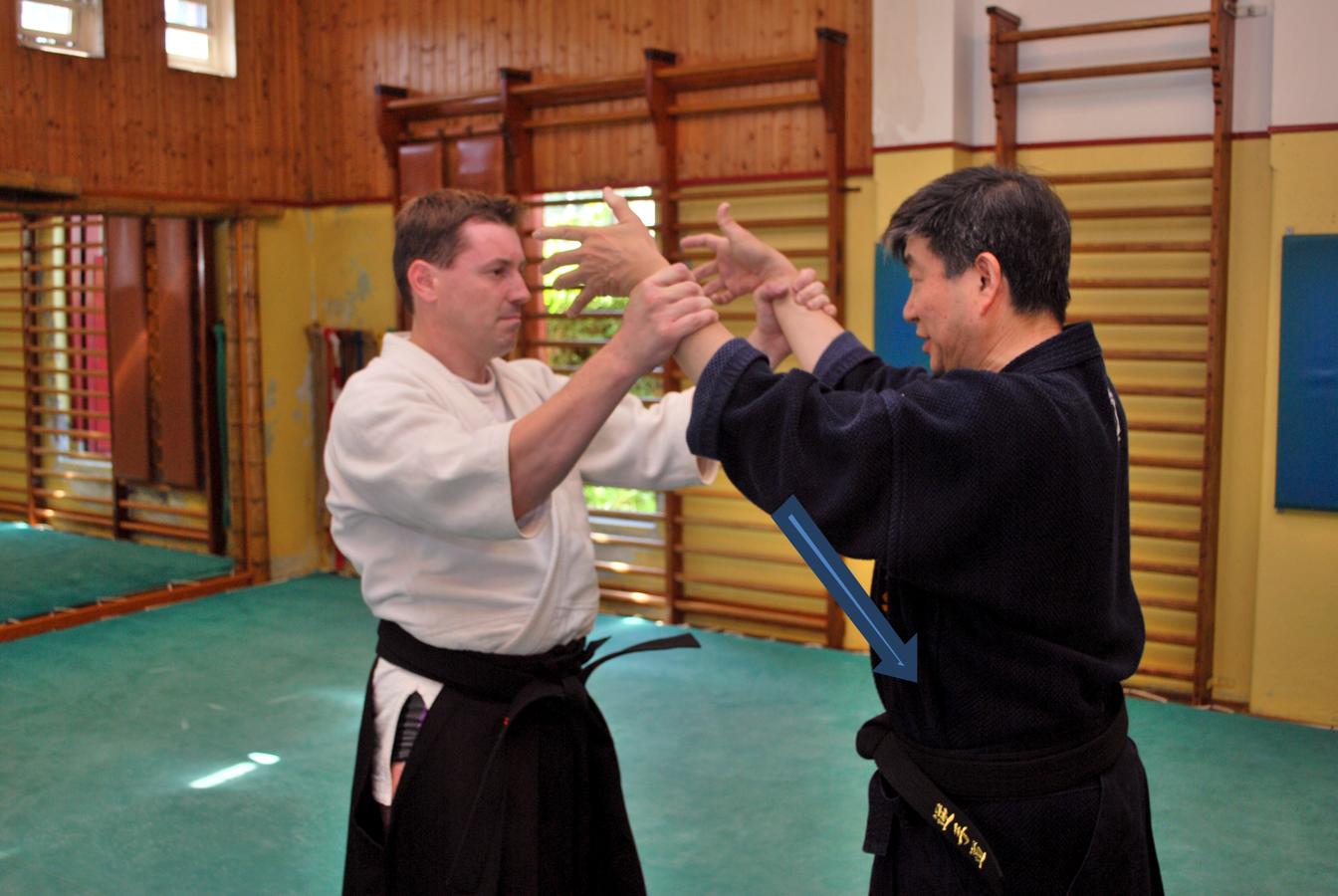 5) A cannot resist being pulled down and sinks to his knees, controlled by A’s hands (FUDO). 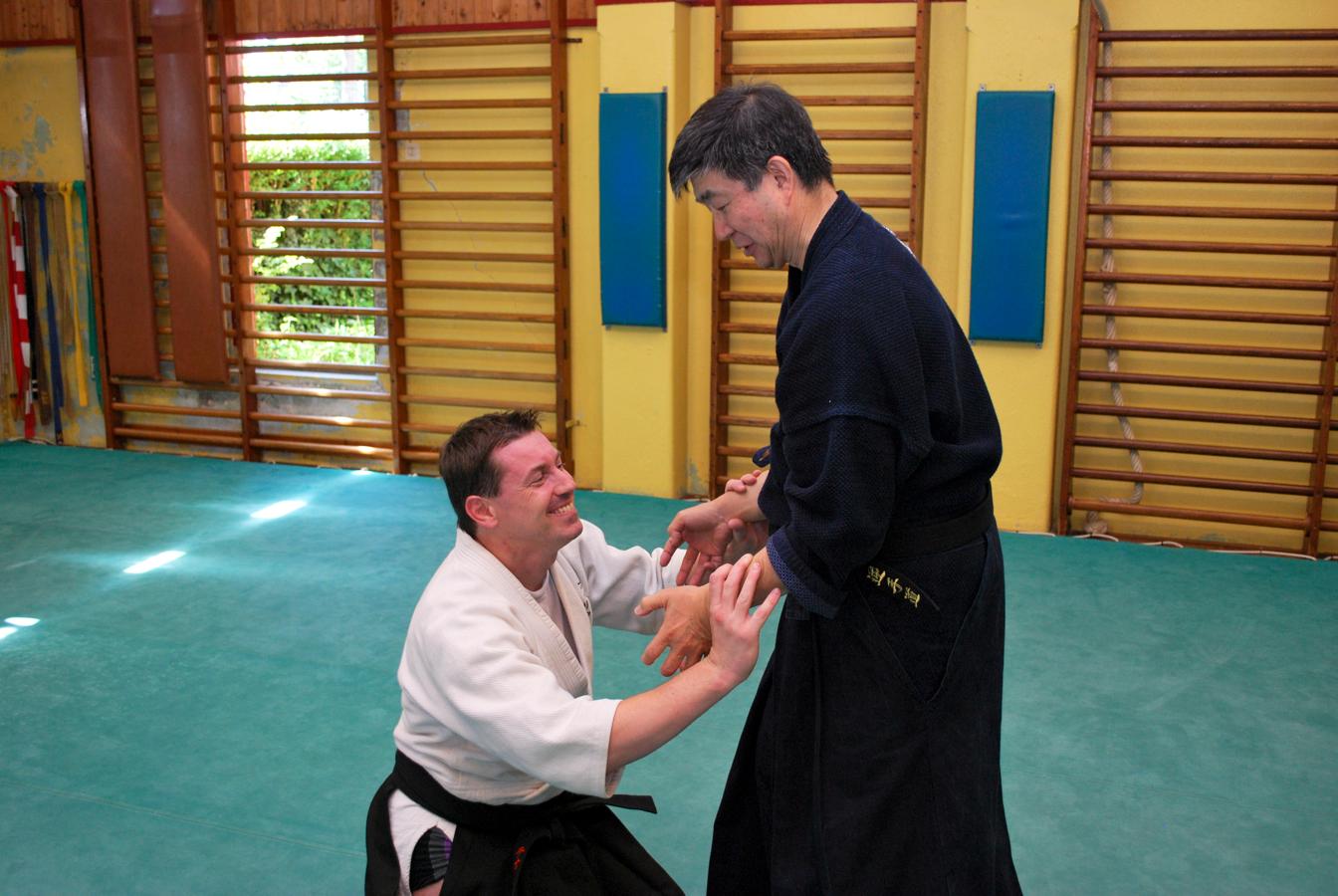 The know-how of this JUJUTSU technique is to bend both hands in the same plane of the arms, in other words, parallel to the arms (as sharply as possible) to place enough stress on B’s gripping hands and lower arms. And D pulls down his elbows close to his body instead of pulling down his hands.

1) D raises both arms straight up.
2) A grasps A’s wrists with both hands (JUN TORI). 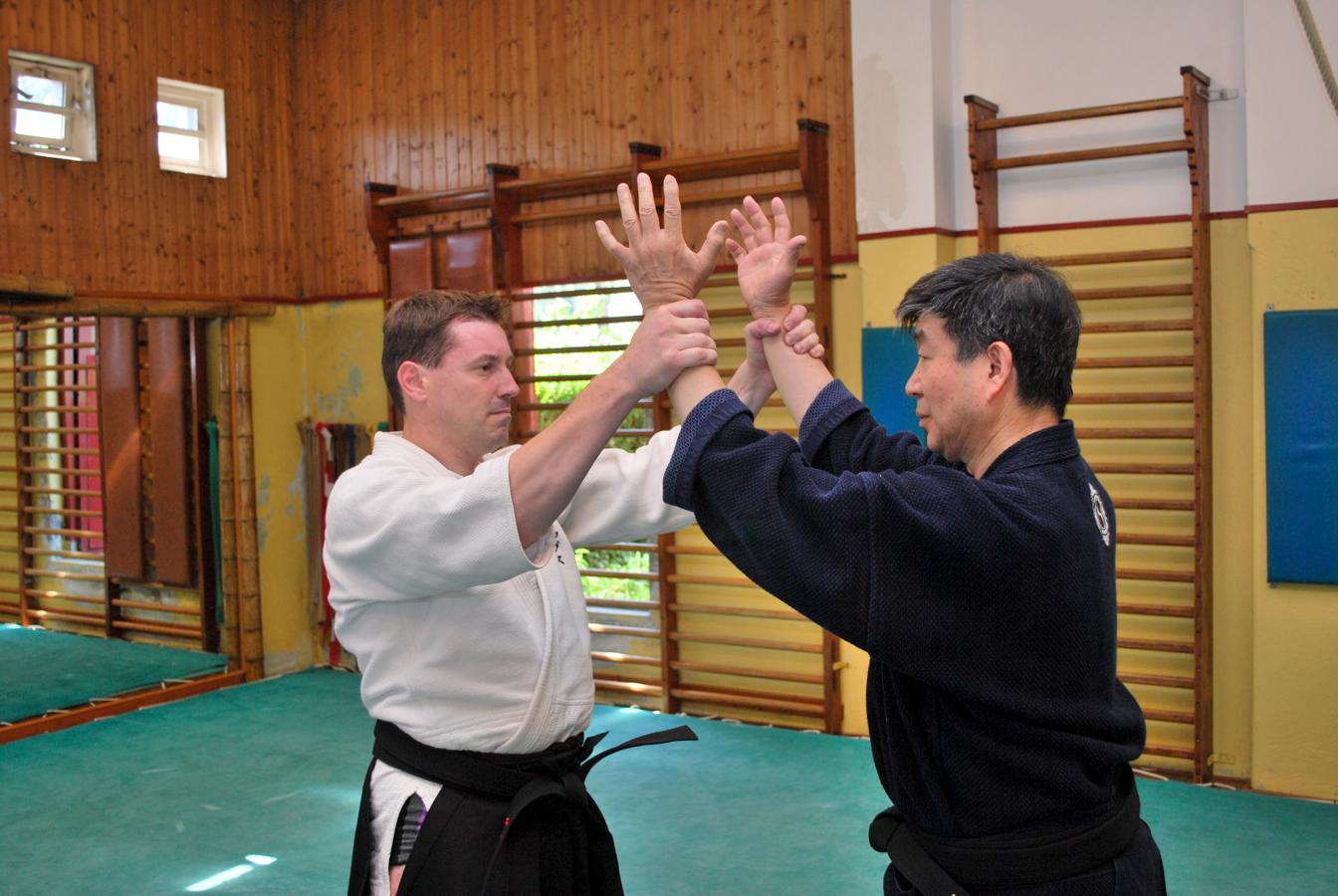 3) D opens both hands and rotates them in the same plane around the tip of the smallest finger (the pinky). 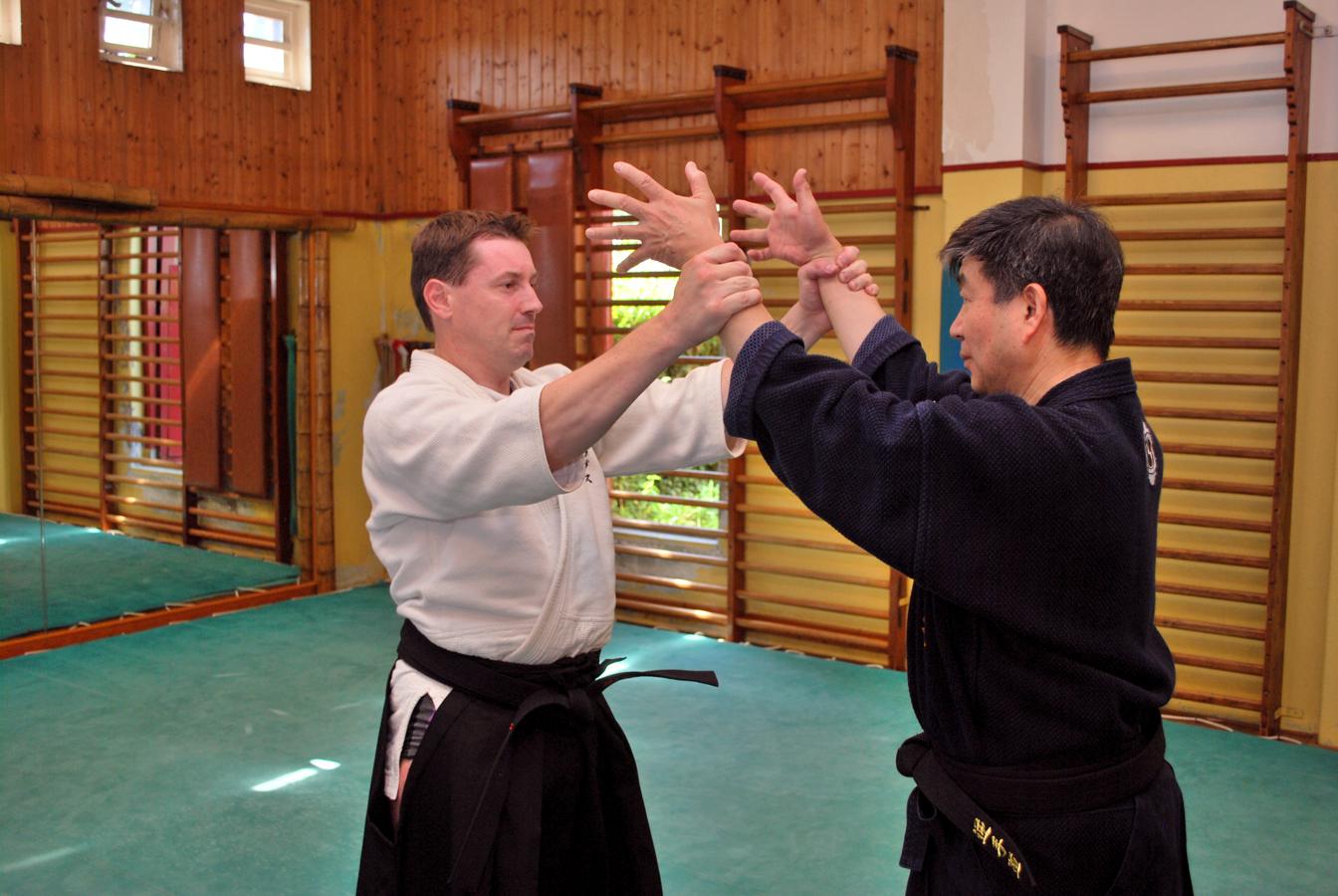 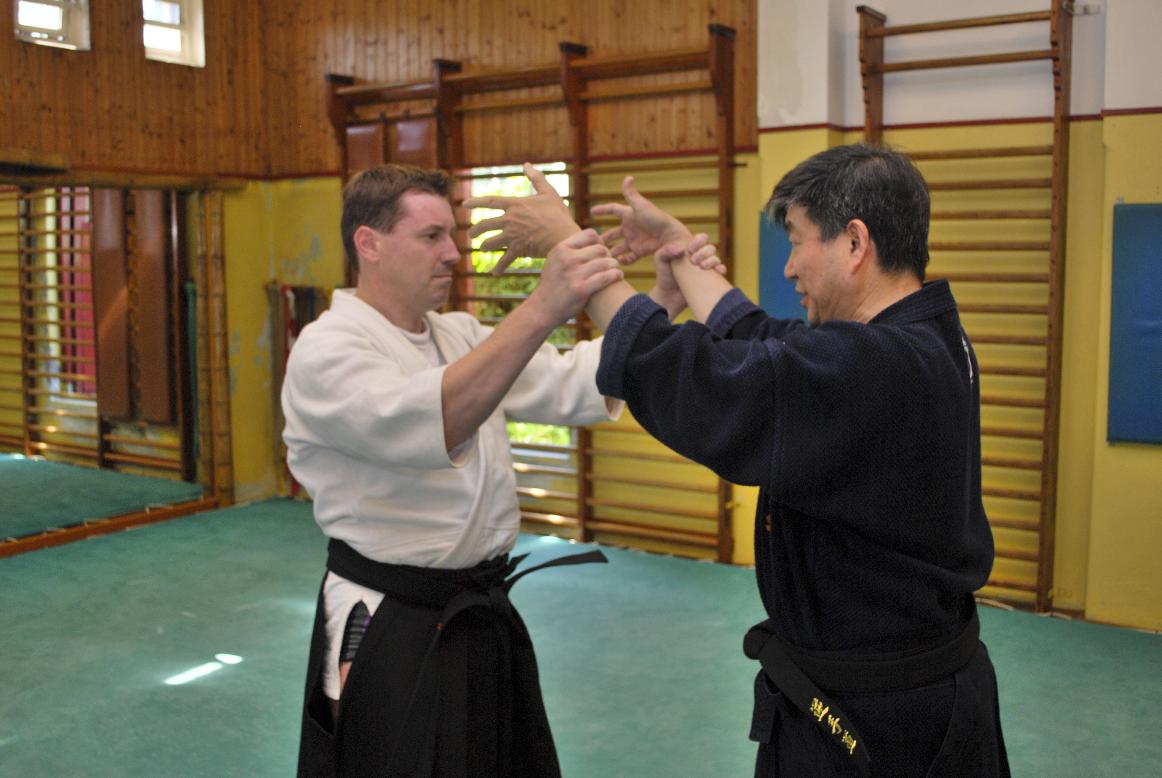 4) A cannot resist the turning motion and sinks to his knees, controlled by A’s hands (FUDO). 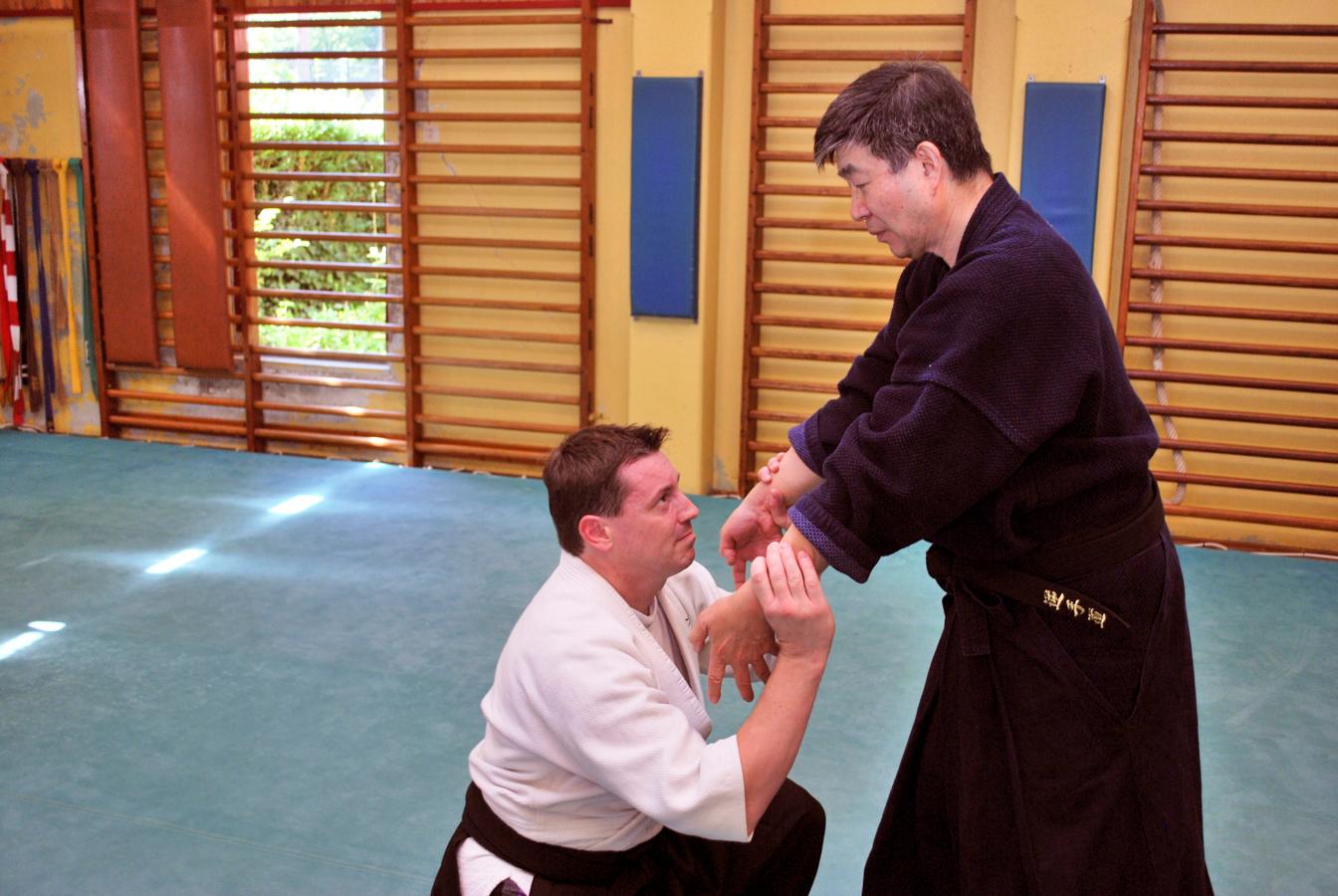 This shows the way of rotation. 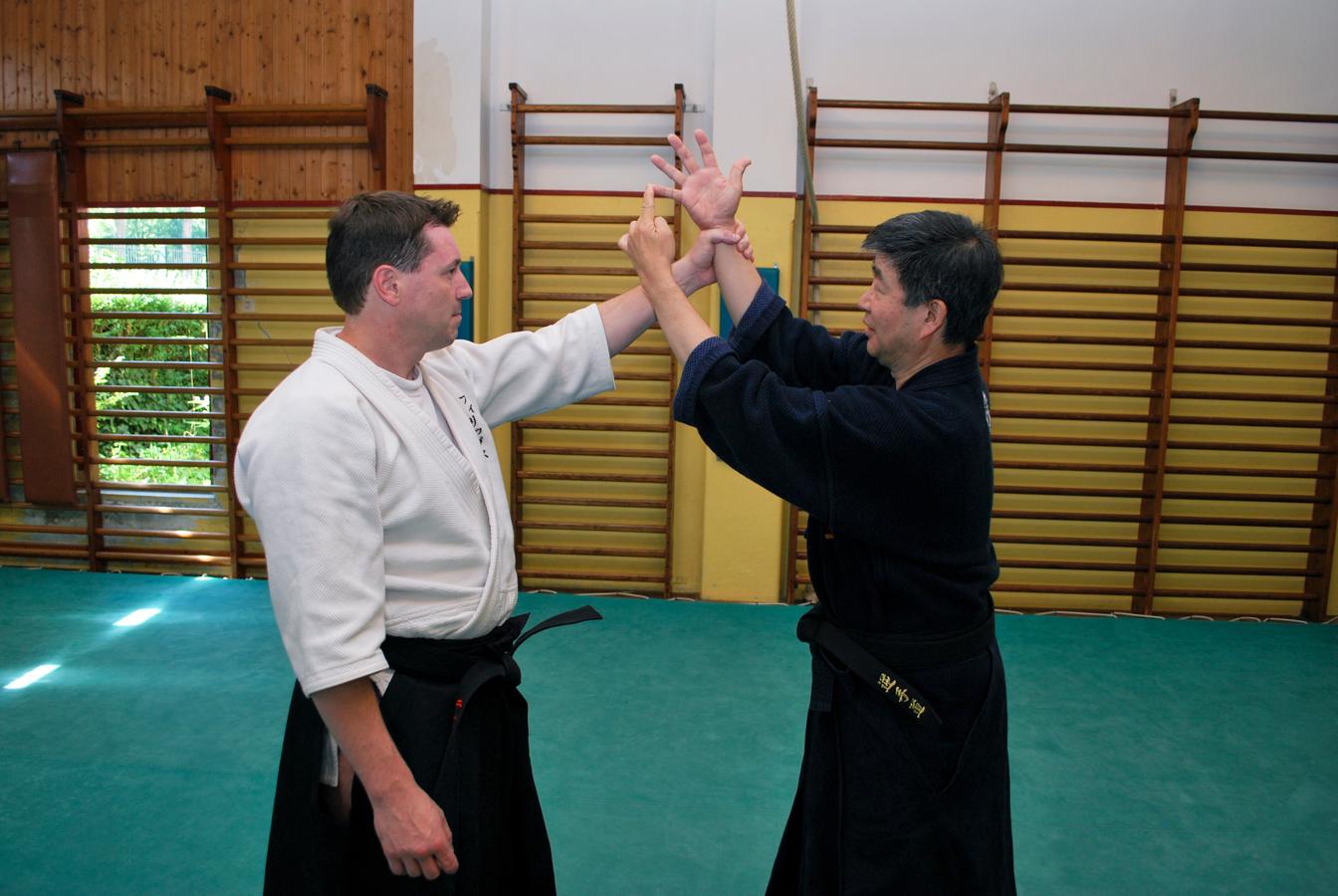 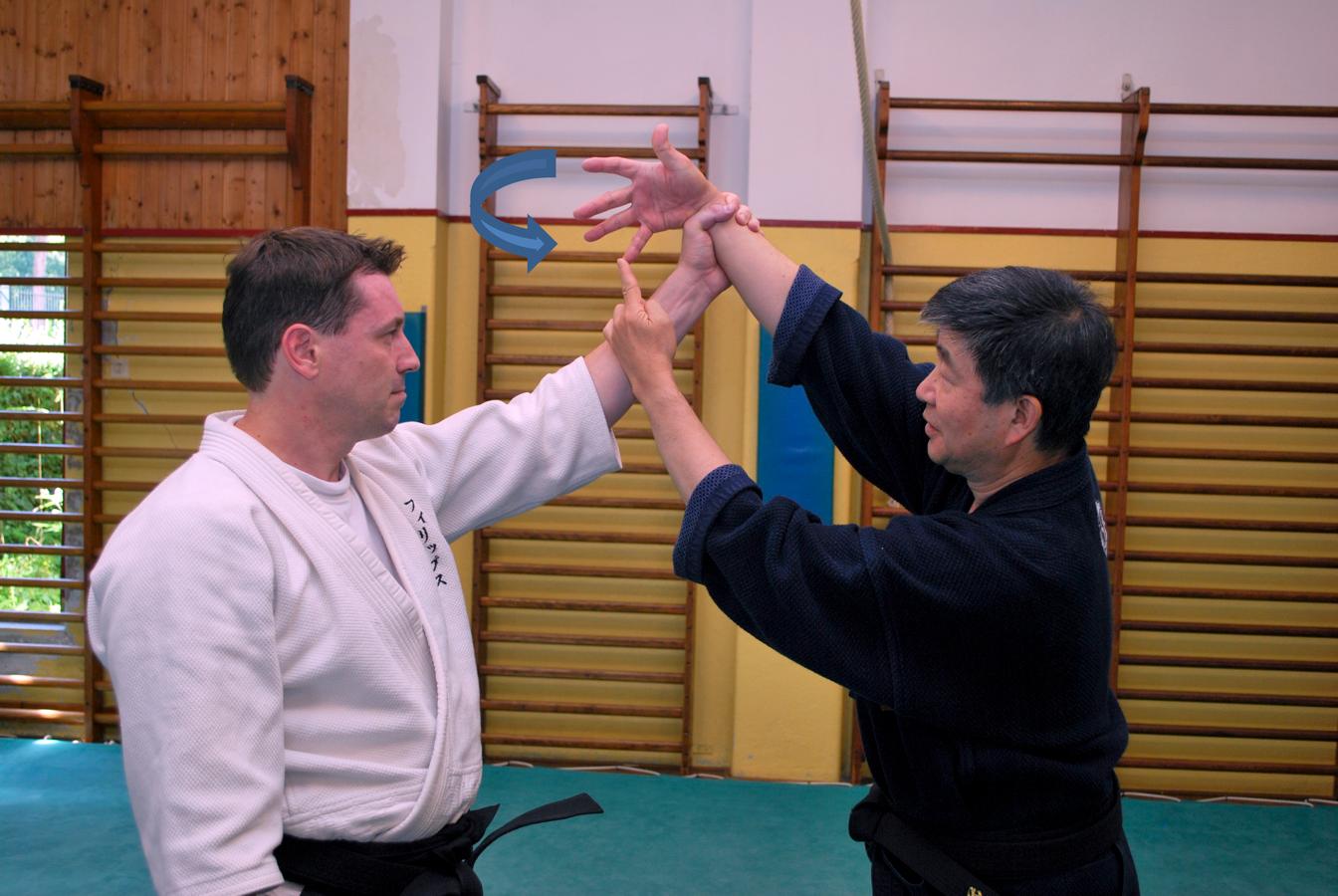 Use the tip of the smallest finger as the center of rotation and keep it in the same position while rotating the hand. 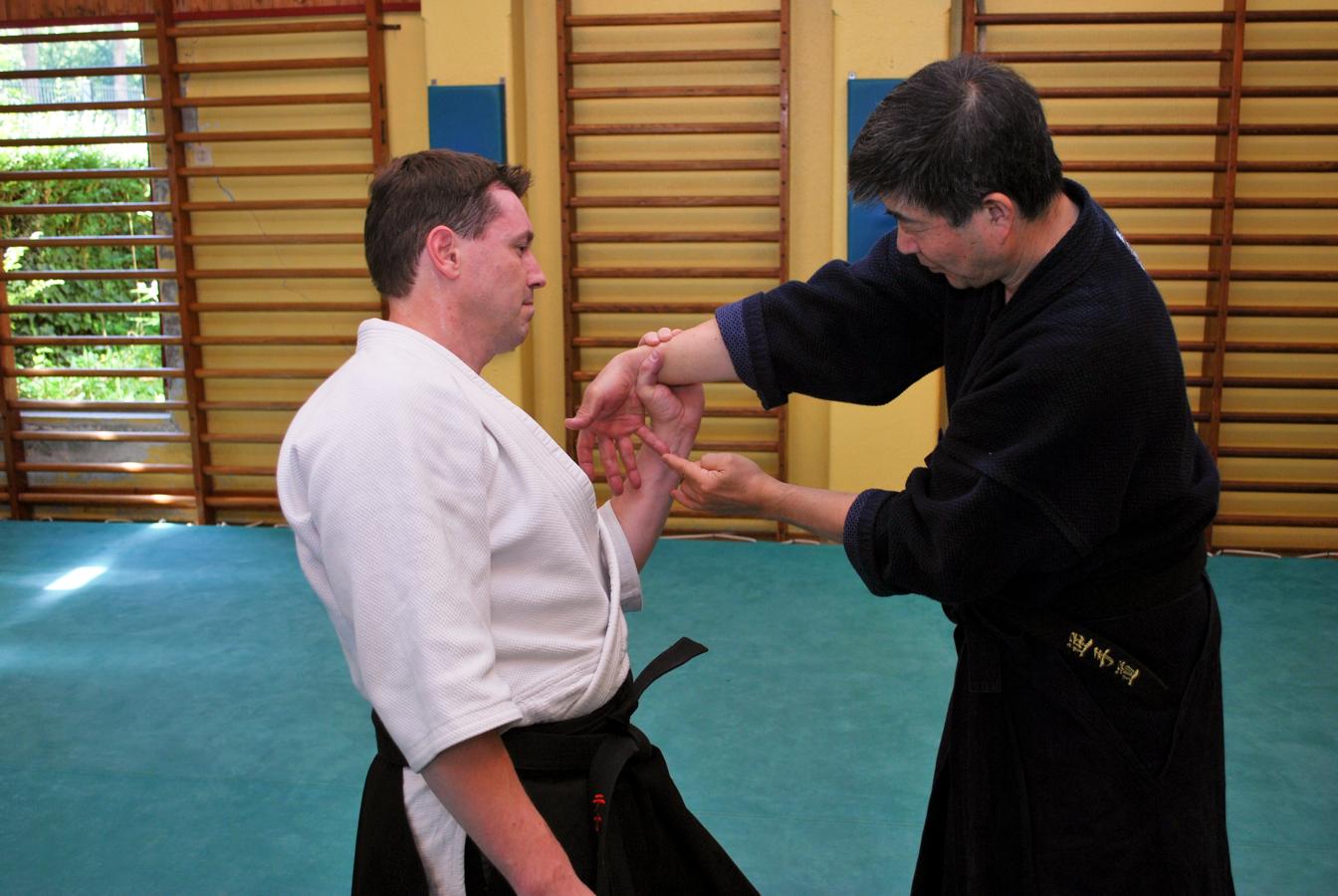 This looks similar to the JUJUTSU technique, but the required power is around half to one-third. With Jujutsu, you really need to bring your elbows close to your body and use elbow motion, rather than your hands to unbalance A. However, the AIKI JUJUTSU technique uses a “virtual fulcrum in the air.” When you rotate your hand in a vertical plane around this imaginary point, the person grasping your wrists cannot resist the circular motion, and his hands becomes completely locked. In AIKI JUJUTSU, you do not need to pull your elbows close to your body as in the Jujutsu method.

If the other person is taller than you, or if you have difficulty rotating your hands enough, then try stepping backwards. It lowers the height of your hands and makes the rotation easier and larger with the additional body movement.

By using AIKI JUTSU you can move your grasped arms down with 1/10 of the power that is required in the case of Jujutsu.

1) D moves down his grasped arms without putting power into either of his wrists where A is grasping. 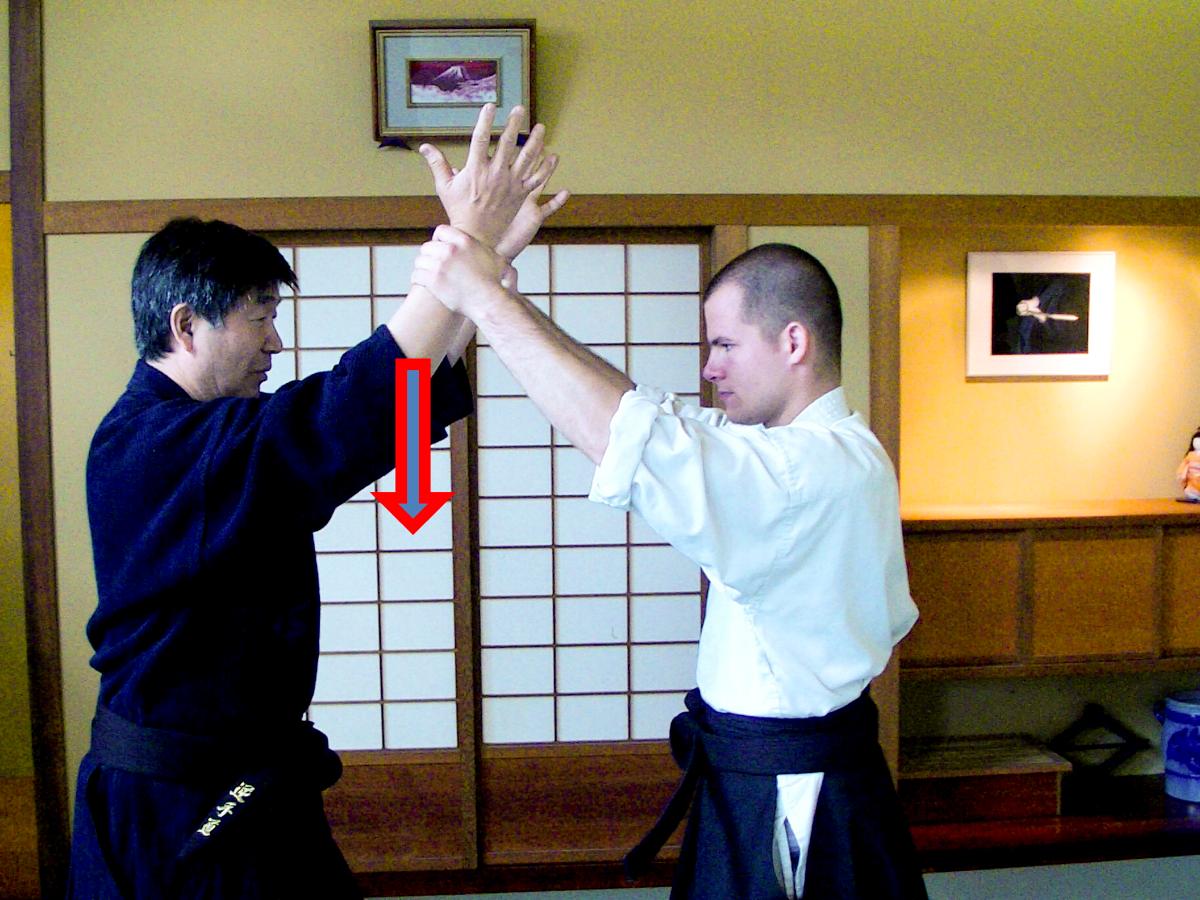 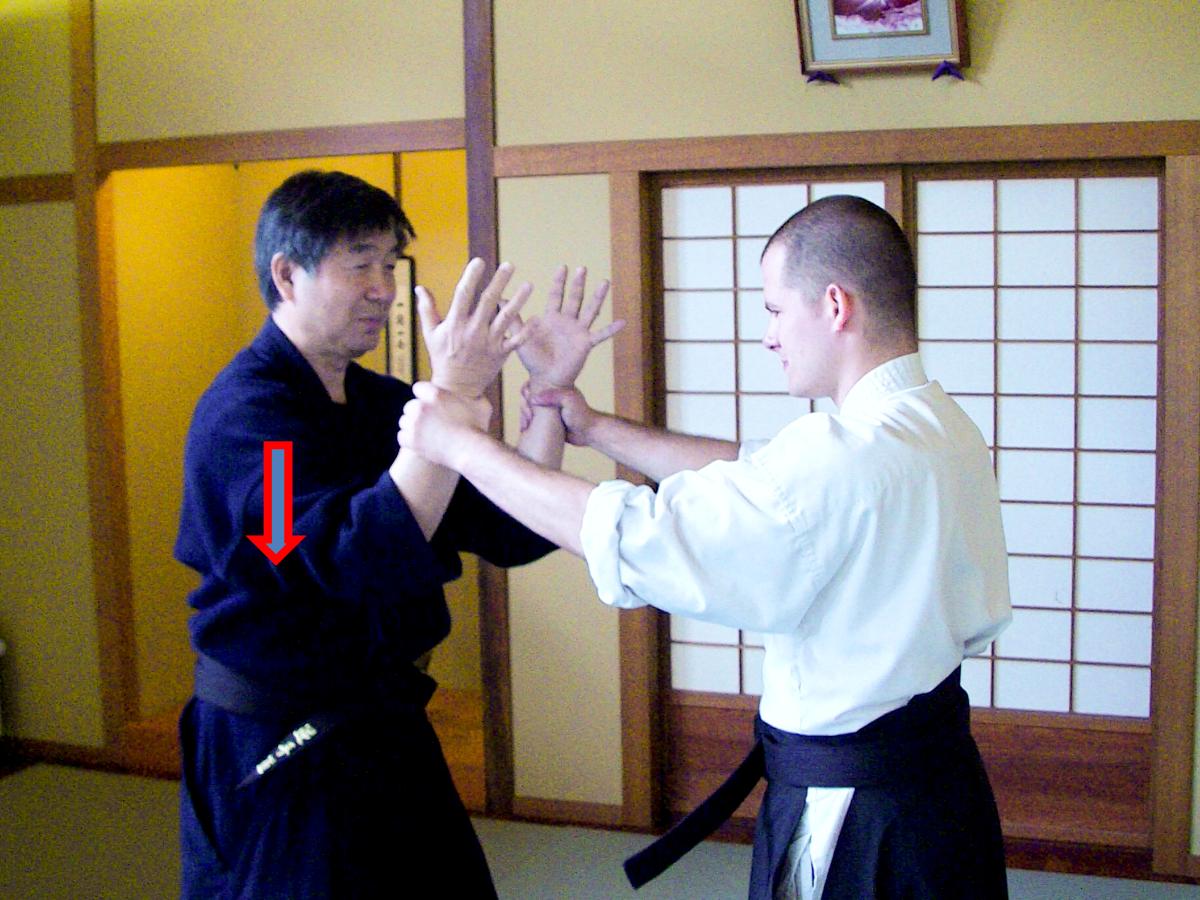 3)D continues moving down both of his arms with special intention not to put power into his wrists. A cannot resist this movement and kneels down on the floor. 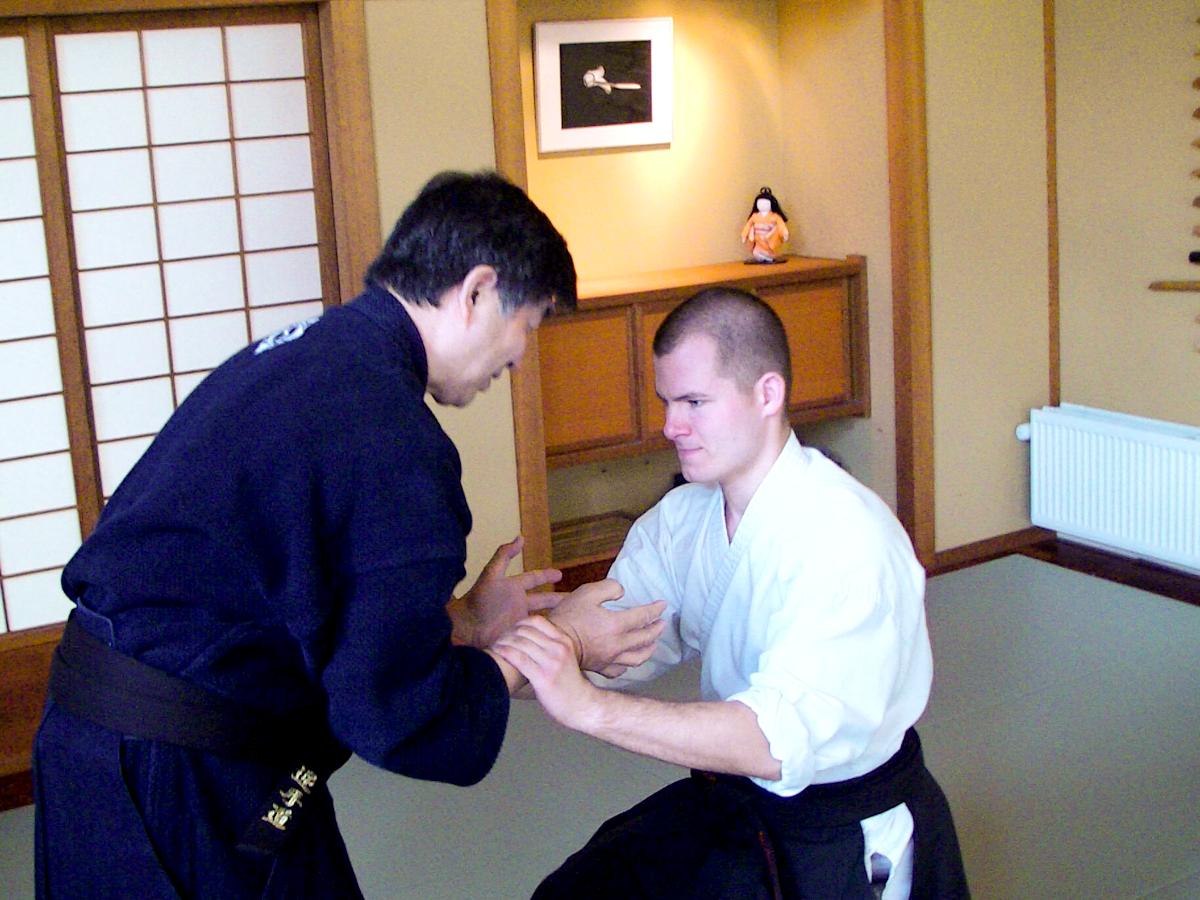 Here D uses AIKI Method-1, or “undetectable power transfer” to move down his grasped arms. He concentrates his intention to assume that his arms are not actually grasped but free, then he can move down both arms without being blocked by A (as shown below photos). 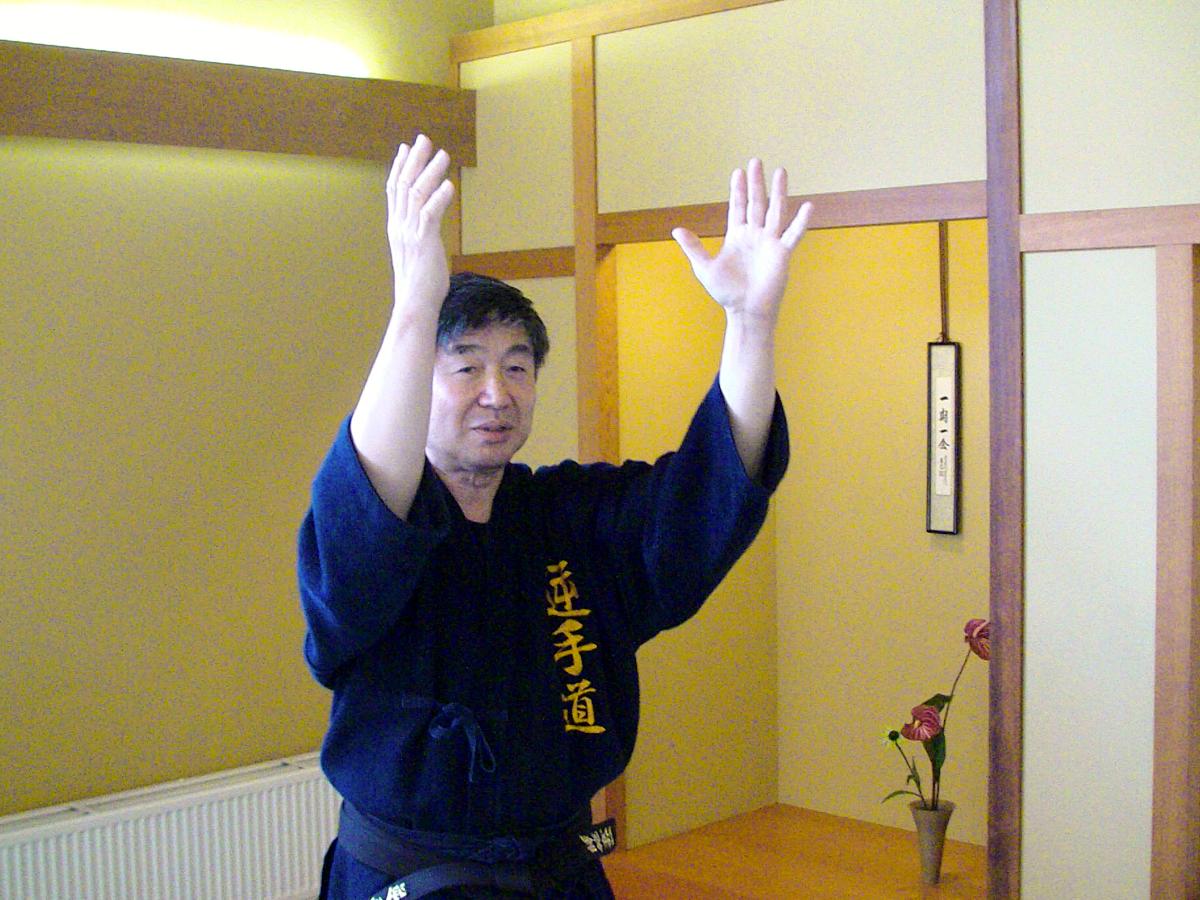 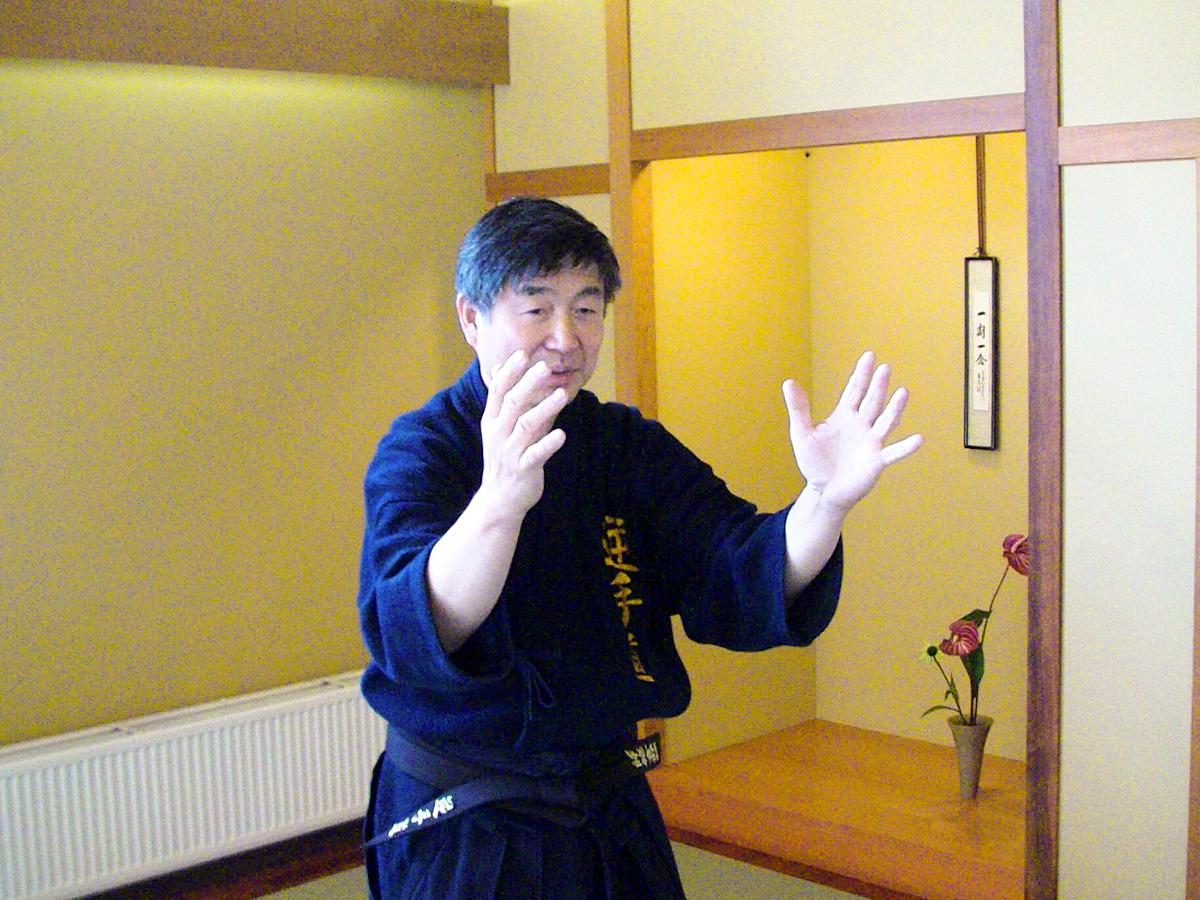 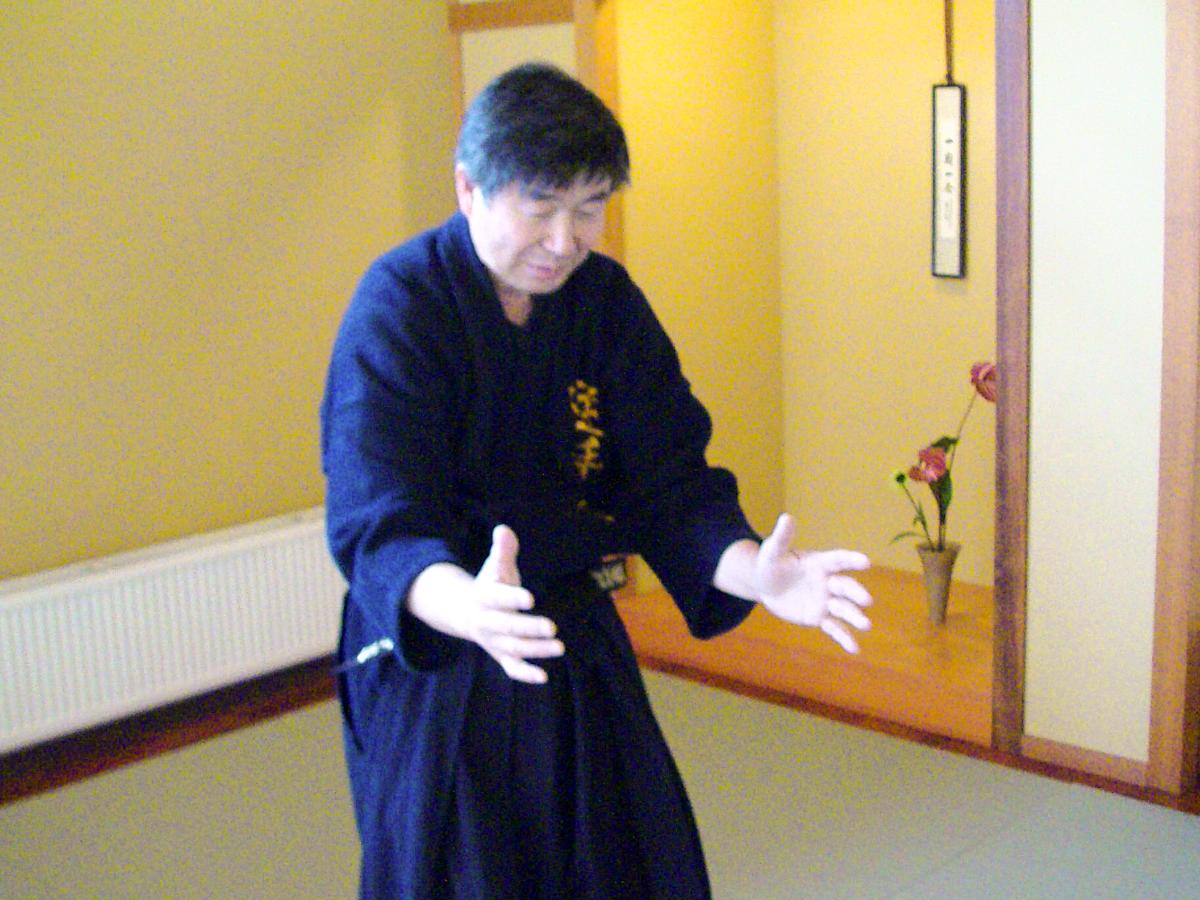 Reference:
“How to AIKI” written by Makoto KURABE, English version of “Dekiru Aikijutsu 出来る合気術” published by BAB Japan in 2012