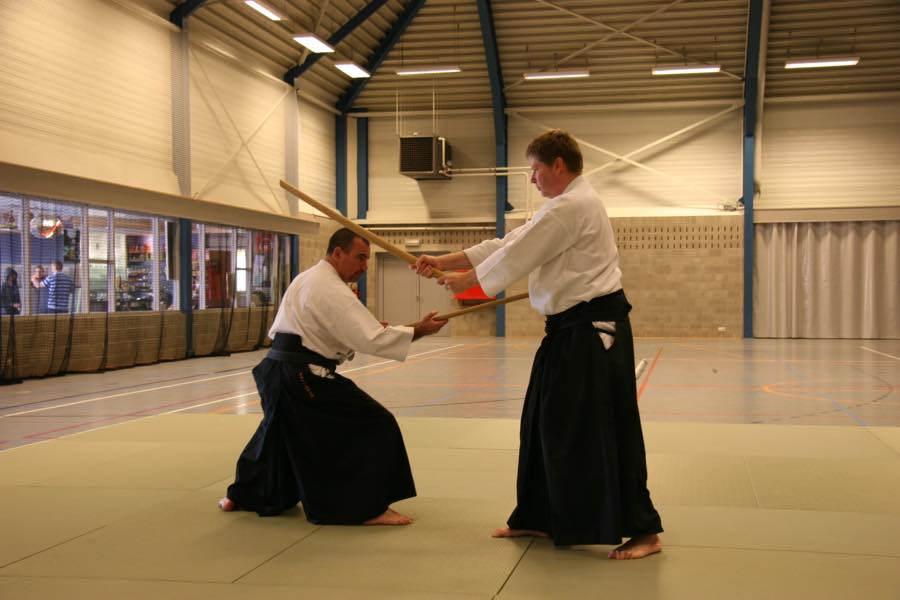 For this 20th part of the Worldwide Koryu Dojo Report we go to the capital of Belgium, Brussels to talk with a personal acquaintance of mine, Guy Buyens. Mr. Buyens talks us through his journey in classic martial arts focusing mainly on the jujutsu of Hontai Yoshin-ryu but also touches upon his Ono-ha Itto-ryu practice. 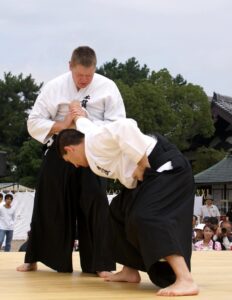 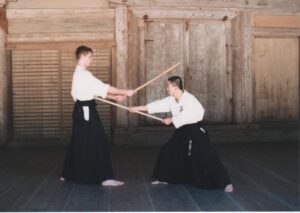 I first saw Hontai Yoshin-ryu in Italy in 1983, during a demonstration tour of martial arts, I was impressed with it and when in 1989, I took a 1-year sabbatical to study Shito-ryu Karate with Mabuni-sensei (son of the founder) in Osaka, Japan. Since Nishinomiya is very near to Osaka, I decided to also study Hontai Yoshin-ryu with members of the Imazu Dojo. I was lucky to get additional classes from Inoue Kyoichi, the son of the soke, later to become the next soke. During the second half of my stay, the 18th soke proposed that I join him twice a week during his daytime classes for high school children. For him it was nice to have an assistant but in order to ensure I was showing the techniques right, he would rehearse the lesson with me one hour before the students arrived in the Dojo. After the classes, I was regularly invited to soke’s, house where we had something to eat before I went to the regular evening training. This private time spent with soke was precious. Upon my return in Belgium, Alain and shortly after, Frederic joined me, later others would follow. 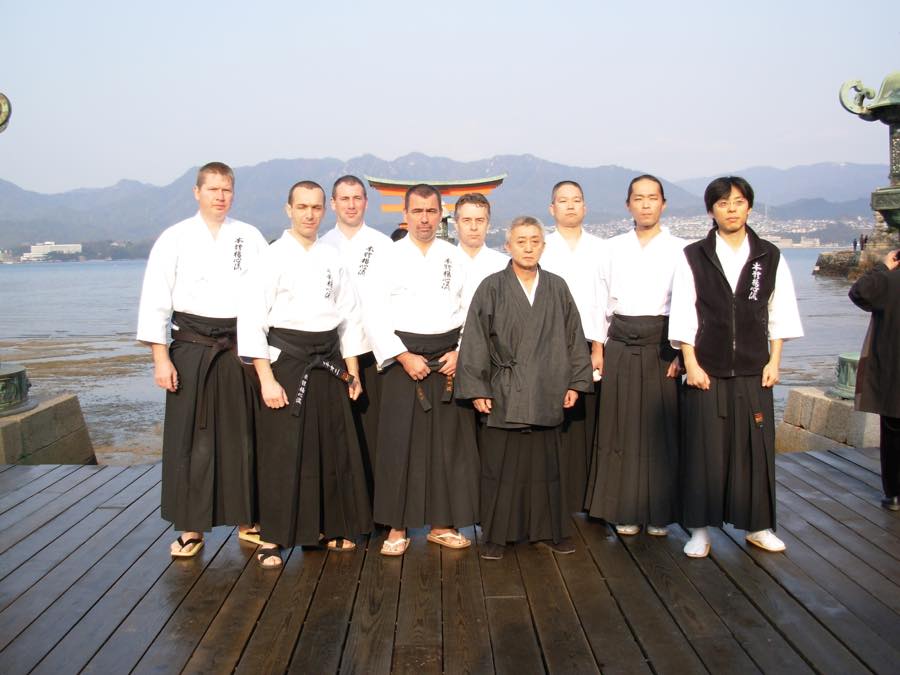 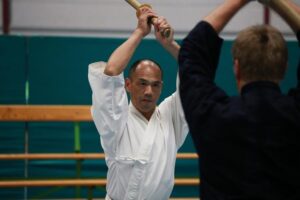 There are not many groups practicing classical arts in Belgium. However some of us are also practicing Ono-ha Itto-ryu. In fact some 11 years ago, I asked Inoue soke permission to study kenjutsu in parallel with Hontai Yoshin-ryu. I reached out to Sasamori soke and was accepted for practice. Frederic Roncioni joined also, as well as Wout Verschueren, a teacher of Muso Jikiden Eishin-ryu. The Belgian dojo was confirmed as Keiko-jo by the current soke, Yabuki Yuji. Other members joined and the group has now about 10 students. Training is totally separated from Hontai Yoshin-ryu. 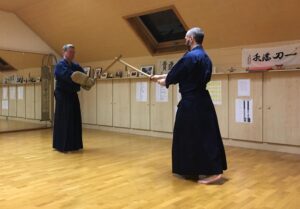 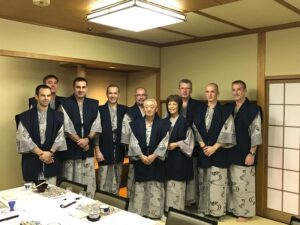 A small group of senior members go to Japan at least once a year. In fact in the last 30 years I think we only skipped twice: the first time in 1996, just after the great Hanshin earthquake, and in 2020 due to COVID-19 travel restrictions. We were also lucky to have participated in many embu in Nishinomiya but also Engyo-ji, Itsukushima-jinja, Nippon Budokan, Kumamoto, Nara etc. When Frederic and I go to Japan these days, we always train during weekdays in Nishinomiya (Hontai Yoshin-ryu) and in the weekend in Tokyo (Ono-ha Itto-ryu). 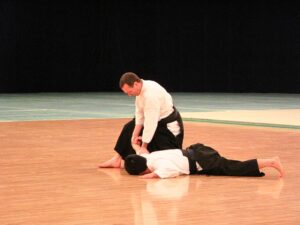 Demonstration at the Nippon Budokan 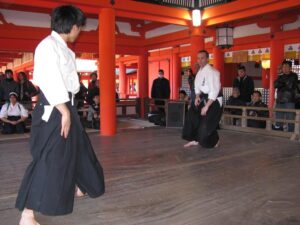 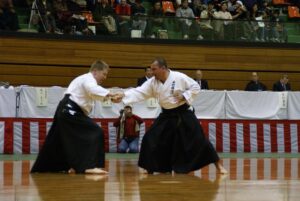 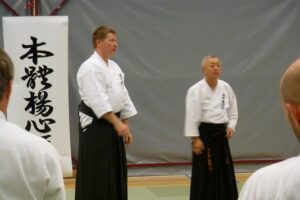 In classical martial arts the “school” is important, hence the relationship with soke. Any barriers that prevent students to train with soke makes practicing difficult. In the early days, just after I returned from Japan where I lived for a year, keeping in touch with soke was not easy, despite returning to Japan on a yearly basis. This improved largely later on, also with soke frequently visiting Europe. Now with the COVID-19 pandemic we are faced again with difficulties to interact sufficiently. 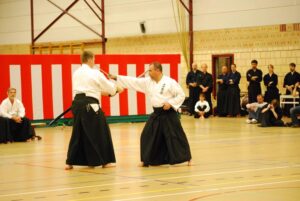 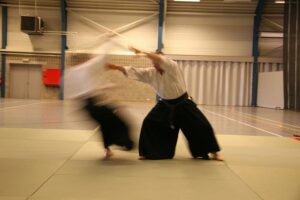 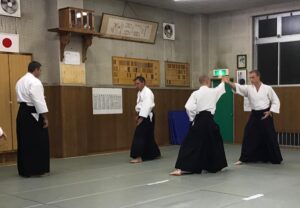 Hontai Yoshin-ryu is a traditional jujutsu school, also incorporating weapons and rope restraining. The kodachi goes back to the founder, Takagi Oriemon Shigetoshi but most of the jujutsu techniques were heavily influenced by Takenouchi-ryu, since the second headmaster studied under Takeuchi Hisayoshi. The staff techniques (Kukishin-ryu Bojutsu) were developed by Okuni Kihei, a retainer from the Ako-han. Later he would become friends with Takagi Gennoshin (3th headmaster) with whom he exchanged techniques. When Gennoshin died, Okuni Kihei became the new headmaster and from then on the techniques of Kukishin-ryu were taught along with the Yoshin-ryu from Takagi. The techniques of Hontai Yoshin-ryu are based upon the principles of Jujutsu Roppo, or the six kinds of techniques used in Jujutsu: Gyaku (joint lock), Nage (throwing), Ate (hitting), Shime (choking or strangling), Toritsuke (capturing the enemy and restraining them with a rope) and Katsu (resuscitation). The philosophical premise of the school is expressed in its name, stressing the flexibility of the supple willow which bends in the wind without breaking. 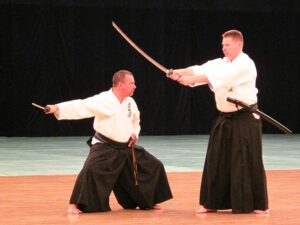 It is a great way to stay physically fit, while fostering important values like respect, self-improvement and correct attitude. It is probably strange for me to say, but the young generation Japanese could benefit even more from practicing the classical arts and learning from their cultural heritage. And if both Japanese and Westerners do that, we can get closer despite the distance and our differences. 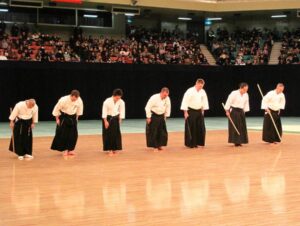 There is a community around Japanese companies that operate in Belgium but we have little interaction. Lately I regularly spend time with a good Japanese friend who lived in Belgium but recently returned to Japan. Being exposed to the language and the culture through this friend was nice but nothing can replace a visit to Japan. 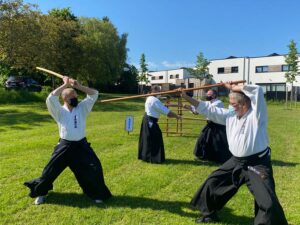 Practice in the time of the Covid-19 pandemic