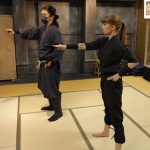 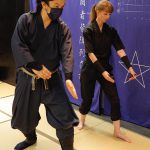 Hi everyone this is Jessica, I’m the Japanese culture and budo ambassador here at Budojapan.com

The other day I had the chance to try a mysterious and unique kobudo(old martial art) called nindou or the way of the ninja.

I have always wanted to learn more about nindo but have never had the chance. I have only seen ninja on tv or in movies and magazines and didn’t have any deep knowledge about who they were and what they did.

I booked in to try the 90 minute ninja experience.

The lesson included: training for shuriken (ninja star throwing, kuji kiri (ninja hand signals) plus an in-depth explanation of the key equipment used for spying and acquiring intelligence, shinobi ashi (how to move around stealthily) ninja meditation and sensory perception.

The sensei for this experience was Narashino Seiryukutsu san otherwise known as Igarashi sensei. He is 4th dan in ninjutsu, and studies Koga ryu. 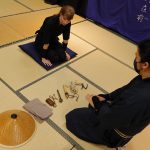 Learning about the ninja’s important equipment

After arriving I changed into my uniform provided by the center, and we started the experience! I first learnt about the ninja’s important equipment. There are approximately 6 items that ninjas traditionally carried with them.

1.Ami gasa – the woven straw hat. This item is wonderful for not only hiding your face and disguises, but you can hide secret items inside the hat and then wear the hat avoiding detection if you are searched.

2.Sanjaku tenugui which is a special rectangular piece of multi purpose material. Used to create disguises, bandages, used for carrying equipment and so on. They are dyed with the natural colours of a certain Japanese bean.

3.The yatate is a special type of case used for holding a brush and ink. A type of old style pencil case the yatate was an important piece of equipment for taking notes and leaving messages.

4.Hibakko: a long bamboo cylinder with ventilation holes and a removable lid. After removing the lid if the middle is pulled out you can see the place where a slow burning flame is kept. Sometimes used for arson on enemy property the hibako enable ninja to safely carry a flame on their person.

5.Kusuri: a medicine box. Containing herbs that soothe the stomach or perhaps poison the kusuri box was an important ninja item.

6.Kaginawa hook a rope or sarashi sash with a clawed hook attached. This hook was unable to carry the full weight of a grown man it was used as an aid in climbing.

◯Makibishi: A spiky star shaped dried chestnut (mizukuri) traditionally sprinkled around entrances or windows where people would try to enter. When stood on they are extremely painful!

◯Hiuchi ishi (a type of flintstone): Ninja specialised in kajutsu and the handling of flames. The hi uchi is metal and rock. I tried striking them together and it was a lot more difficult than I thought it would be!

Sensei explained each one of items in great detail and I was allowed to ask questions during the information time.

All the equipment he showed me was amazing. Some I had seen when watching movies, others I had never seen before. I decided to look for a yatate as soon as I got home from the lesson.

As we got talking the sensei mentioned from Showa 30 onwards ninja went from being called Shinobi no mono to being simply known as ninja.

What is “shinobi ashi” ? 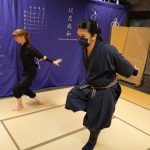 Next we moved on to shinobi ashi practice. I had heard about shinobi ashi and was really interested to try. Ninjas are sometimes spies, sometimes messengers they crept in to enemy living areas sometimes in total darkness. Imagine being in a house for the first time in the dark and navigating without making a sound!

Using tanden the inner muscle found under our belly button, and my legs I tried shinobi ashi whilst using my arms to feel for possible obstacles. Moving very slowly and quietly is alot harder than it looks! I found myself loosing balance or making sounds with my feet on the tatami.

We trying moving backwards, guarding a sword, then jumping. Sensei explained that landing after a jump makes loud sounds, however if can use tanden correctly and absorb that impact energy then you will land like an agile cat!  I think for me it will take more than one lesson but it was very nice to hear about tanden. In kyudo we must also use or switch on tanden in order to connect ourselves strongly to the grown and be strong and unwavering. 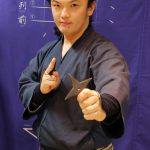 Next I had shuriken practice and explanation. Shuriken is such a famous piece of equipment so I was really excited to learn to use them. There is a great target area that is set up in the dojo especially for shuriken throwing. 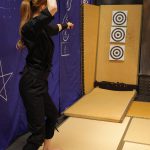 Great target area that is set up for shuriken throwing.

Sensei explained the stance, use of body weight, the zanshin for this equipment.

I tried the next type of shuriken that were thin and long. Called bo shuriken they are usually thrown so that they leave the hand standing straight up (90 degrees)  but rotate in the air and pierce the target at 180 degrees. I found the technique required for this type of shuriken was a bit more difficult than the standard shuriken.

Other parts of lesson included hiding techniques, involving keeping eyes shut, breathing low so your shoulders don’t rise up and down and give you away.

Sensory perception training was also really interesting as the use of eyes and ear plays an important role not only in nindou but in kyudo too. Sensei showed me how to use my eyes and my field of vision to its fullest so I wouldn’t have to move my head and be discovered!

We practiced a listening exercise where metal objects were dropped behind me and I had to guess how many had been dropped! Some metal objects had several sides and I needed to differentiate between a dropped item and one that had bounced off the floor and hit a different side, very difficult!!

In a real situation this is for listening to footsteps of intruders and knowing how many there are without even looking!

This 90 minute lesson was both insightful and amazing! There was a good balance of theory and practical learning. I was allowed to touch and ask questions, take photo and video along the way which I think is wonderful.

At the end of the lesson I received a certificate of participation which was really nice. I will hopefully go back in the near future to practice shuriken throwing again! 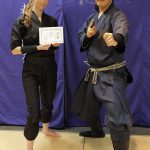 On completion of the course you receive a certificate of participation

Ninja Information Center
https://dojo.ninja-official.com/
Twitter @ninja_council
Open from 11:00 till 18:00
Children are welcome at the dojo and the experience is adjusted according to age and numbers of participants (ok for up to 8 people at once). English and Chinese OK.