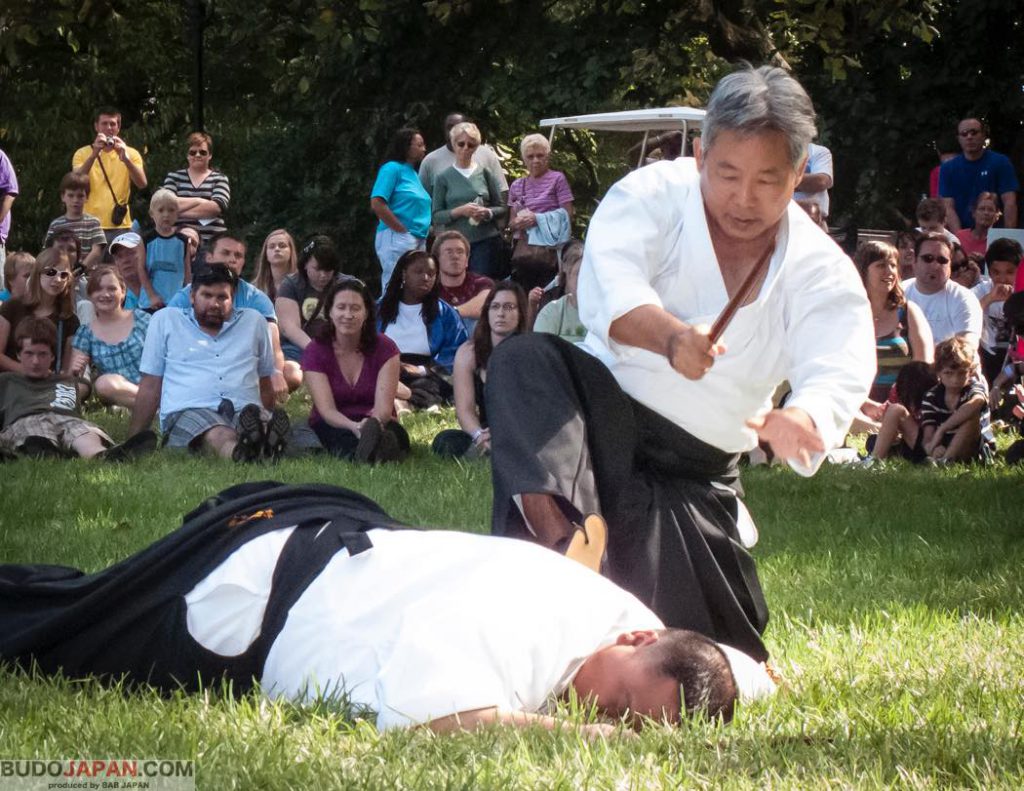 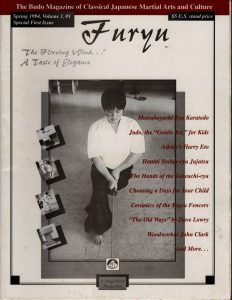 The sixth part of “Monthly Worldwide Koryu Dojo Report!” gets to know a little more about Wayne Muromoto, an ethnic Japanese American from Hawaii, teacher of Bitchuden Takenouchi-ryu and Urasenke sado practitioner. Muromoto sensei was well-known in the English-speaking koryu community for being the publisher and editor of “Furyu” magazine (1994-2000), the first serious attempt for a magazine dedicated to these arts. 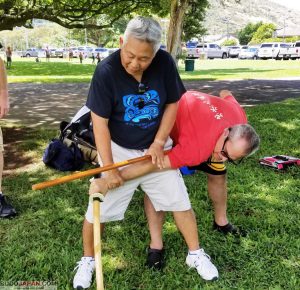 Wayne Muromoto and George Miller practicing in Manoa District Park as indoor gatherings for five or more people is currently prohibited due to Covid-19 measures. Photo by Dave Hee. 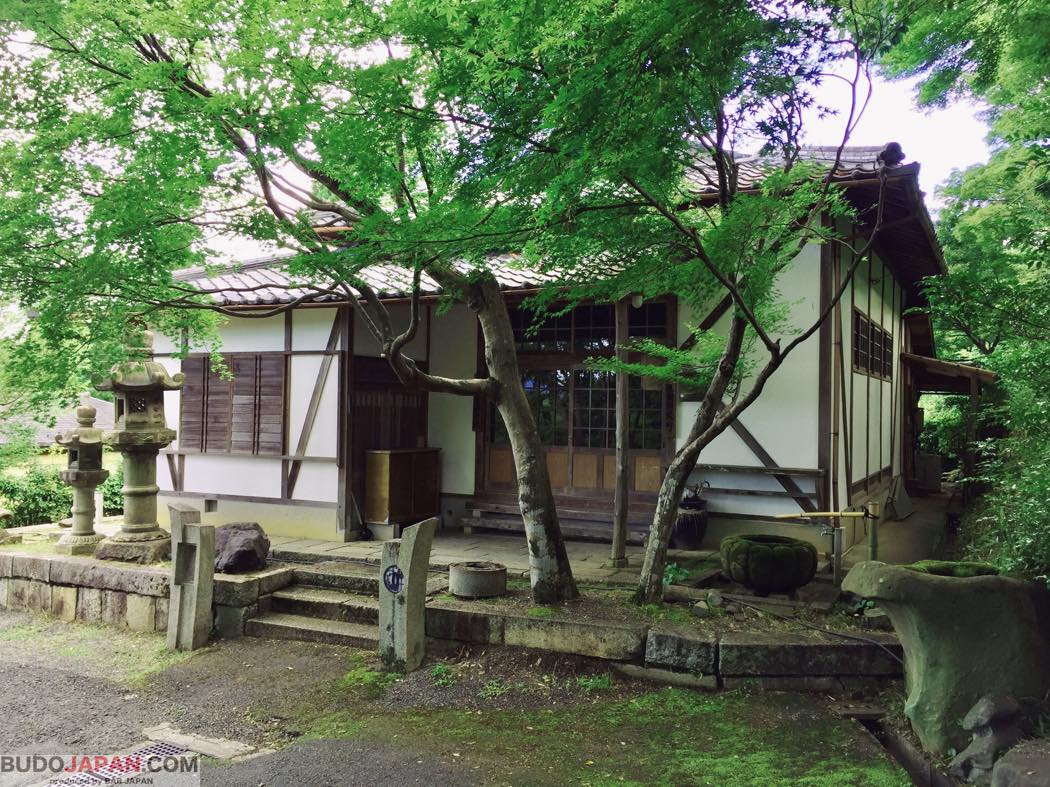 The entrance to Choufukan, Wayne Muromoto’s home dojo in Kyoto.

When I came to Japan in 1984, on a scholarship to study chanoyu at the Urasenke Foundation in Kyoto, a friend introduced me to Ono Yotaro sensei and the Choufukan. I was immediately taken by the style and by sensei’s character as an artist and bugeisha. 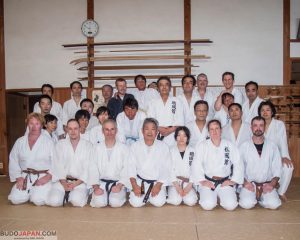 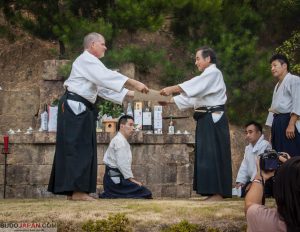 I also trained at the Butokuden under Ohmori Masao sensei, Muso Jikiden Eishin-ryu and ZNKR iaido. Under his ongoing tutelage, I received ZNKR ranking but when he passed away, my connections to the group were severed by his successors. I currently have an informal relationship with my sempai, Ken Maneker, who teaches in Vancouver, Canada; Ken studied under Ohmori sensei and under the late Iwata sensei and his Muso Jikiden Eishin-ryu is very much influenced by them and his own research into the ryu’s more “koryu” aspects. I do not rank my students or hold any official affiliation with any other group other than Maneker sensei currently in Muso Jikiden Eishin-ryu.

In America, there are several koryu groups but in terms of numbers, we are not collectively as big as modern budo or MMA, etc. For Bitchuden Takenouchi-ryu, we have a group in Vancouver, Canada, and in Mexico and study groups in the Midwest and South America. 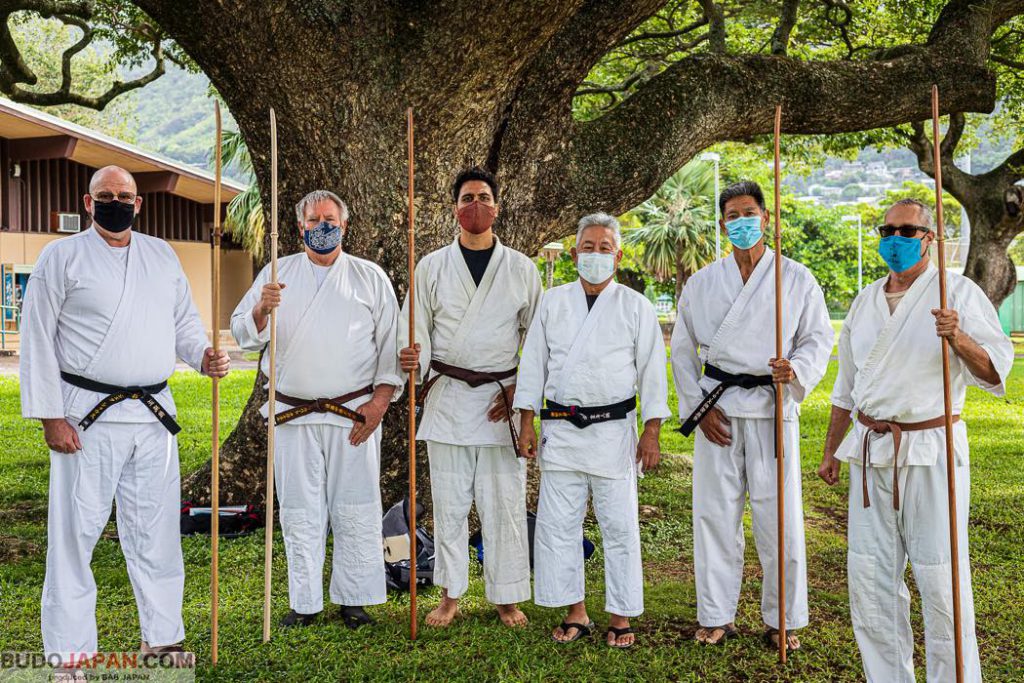 A group shot in November 2020 during the Covid Pandemic.

I try to go back to Kyoto at least once a year, and sometimes we have visitors from Japan to Hawaii; this year, our plans were canceled because of Covid-19.

At Choufukan, circa 2018 Photo by Ono Yotaro. 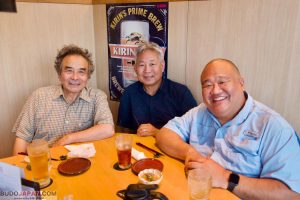 4)What is the biggest difficulty in practicing classical Japanese martial arts? 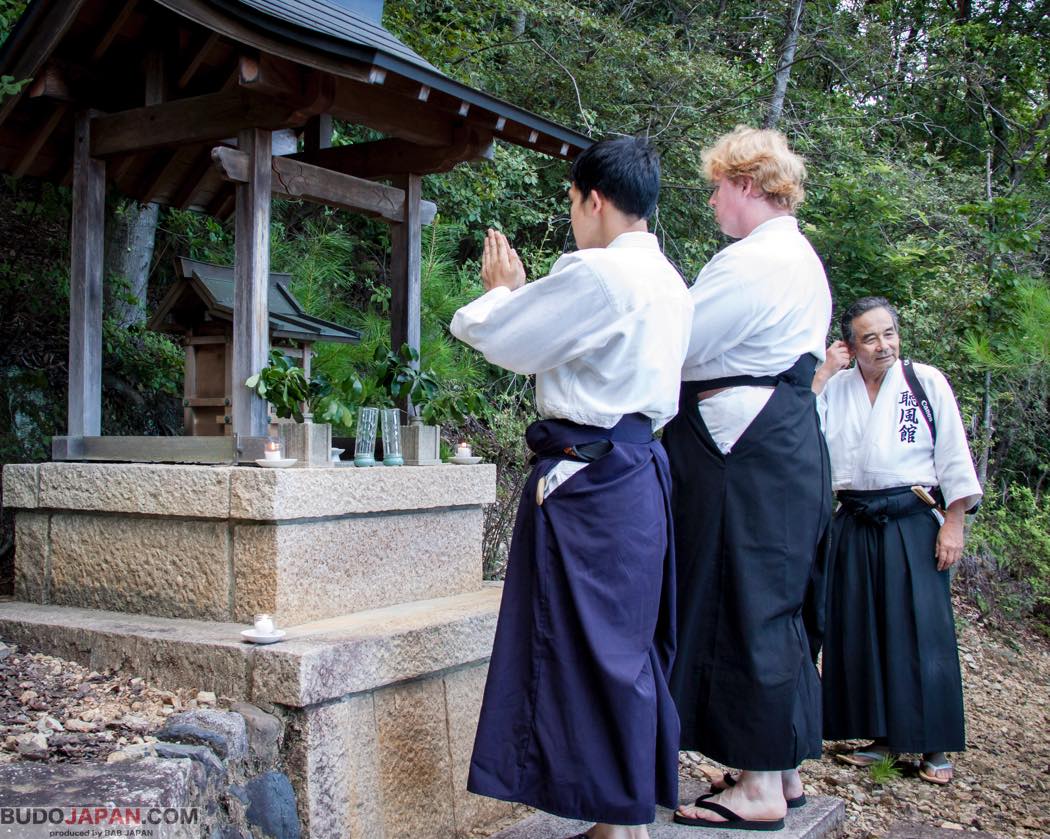 I think first, not many people are really interested in it, even in Hawaii. Then many people may seem interested but they do not understand the difference in attitude, culture and training style, so they soon drop out. Therefore getting new members seem to be a problem.

Most classical training methods are kata-geiko, and the goals are mainly to perfect one’s techniques, mental attitude, and study the history and culture. In many modern systems, competition and attaining rank seem to be the goals to the detriment of other goals. This is a very broad generalization, of course. I am friends with some wonderful karate, judo and aikido teachers who also believe in perfecting techniques and a student’s spirit as the main goals, but they are often considered “mavericks” by their peers. My students are now middle-aged and older, so they are seeing the advantages to kata geiko because they can continue to train without straining their bodies too much and getting injured. 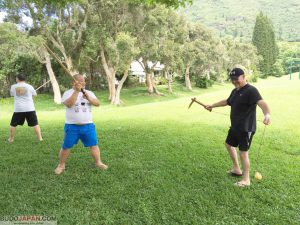 I would say perhaps the emphasis on close-quarter combat. The school specializes in the kogusoku, a short sword. The other technical characteristic, in terms of learning goals, is that it stresses being able to improvise and handle any situation. As a sogo bujutsu, there are over 400-odd kata in the style using different weapons, armed and unarmed. The idea is that once you master some basic concepts and movements, you can adapt them to all sorts of weapons and situations so that you are not “frozen” or unable to counter an attack. 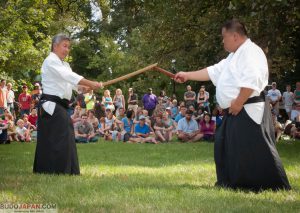 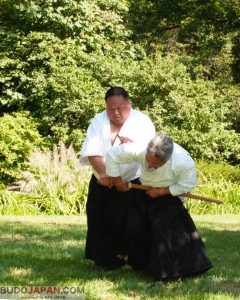 Historically, we are told that when the founder, Takenouchi Hisamori, was visited by a mystical yamabushi, he was taught that “where you stand is where the battle is decided,” i.e. one must meet conflict and end it as soon as possible. The yamabushi also broke Hisamori’s very long bokuto in half and instructed him in the advantages of using a shorter weapon. The other technical doctrine, I believe, is that whenever possible, one should avoid conflict, but if it is necessary to engage, to try to avoid bloodshed. That is why Hisamori was also taught hojojutsu, tying up and holding an enemy captive without killing him. Only if that is not possible should you cause harm, and then lastly slay an attacker. 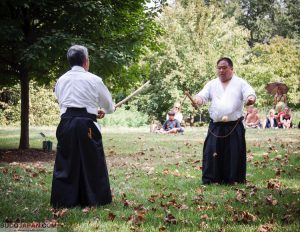 There are several benefits, which may not be relevant to many people seeking “martial arts.” 1. It is a way to understand traditional Japanese culture. Many times, I have discussions with my students that start with a koryu bugei concept but I must explain it in terms of traditional Japanese culture, especially from what I learned from studying chanoyu. 2. Second, there is of course the health aspect. Coming to practice helps to keep you physically and mentally healthy. 3. Third is the martial aspect. As I tell my students, learning how to use a sword in armor is not really relevant in this day and age, but the concepts of distancing, timing, rhythm, and awareness (zanshin), still helps you in daily life, social interactions, and possibly avoiding physical confrontations. And you never know; something you learn may help you in an unusual situation. I had a former student who, after training very hard with me for several years, entered the US military. He was a language specialist in Chinese but served as an intelligence officer in Afghanistan for three tours of duty. He said the mental concepts he learned from koryu actually helped him in some unusual situations. 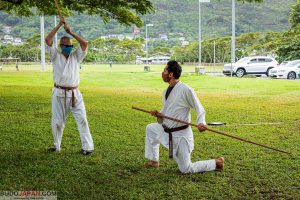 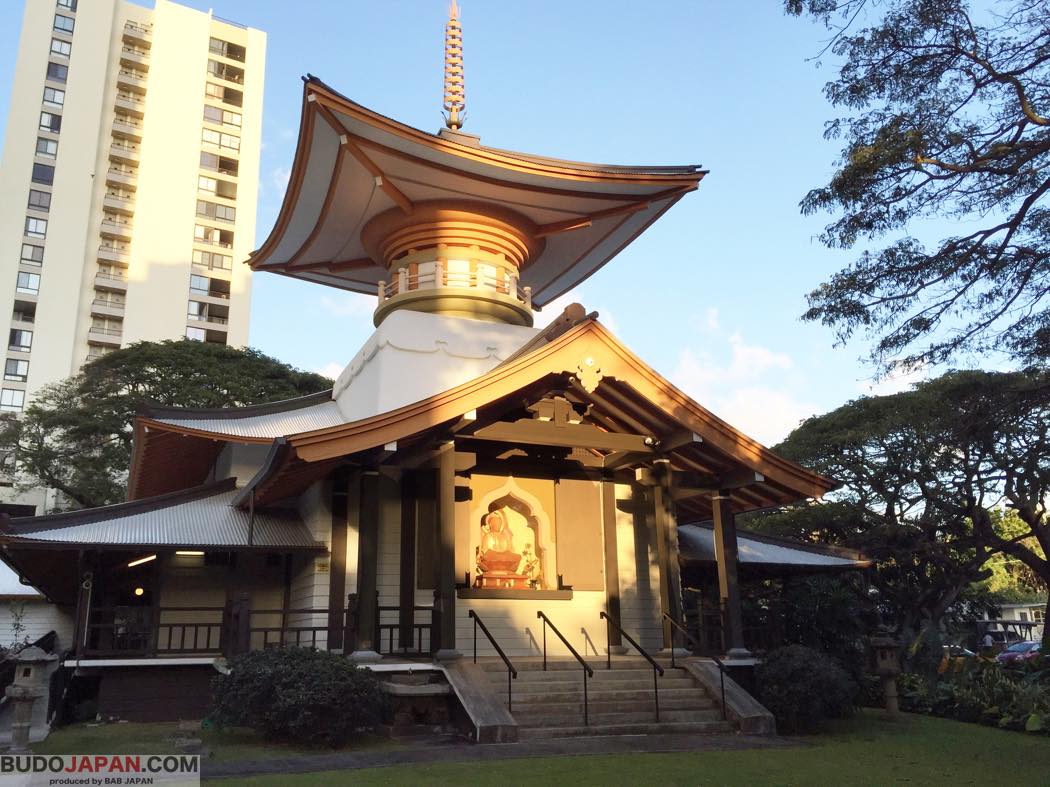 The main temple (Hondo) of Myohoji, Honolulu. Seifukan Dojo practices at a multipurpose building next to the hondo (main building).

Hawaii has a very large Nikkei community. The first Japanese immigrants came to Hawaii in 1868, Meiji Gannen, and they are called the Gannen Mono and until the 1920s, many more came to work in the pineapple and sugar plantations. My grandparents came from Niigata and Okinawa in the 1910s. Currently ethnic Japanese make up about 23% of the population (185,502 in the 2010 Hawaii State Census). There are many biracial people who are Japanese-something and are often called “hapa” (half-and-half) in Pidgin English; people who identify as Japanese plus other races are 312,292. (Hawaii’s total population is 1,360,301)

I am ethnically Japanese. Besides teaching koryu budo, I am also a student of the Urasenke School of Tea in Hawaii and was the Tankokai Urasenke Hawaii Association’s chief operations officer for ten years before stepping down in 2017; I currently serve on its board of advisors. I am kept busy with teaching koryu, learning tea, and of course working as a computer graphics and photography instructor at a college.