It’s not by chance that out of the last six articles I have written for “Hiden” three were about karate: as I wrote in the introduction of one of those articles, the inclusion of karate in the 2020 Tokyo Olympics has brought the art to the front and center of almost all martial arts discussions in Japan and have helped even the most arcane, provincial sub-styles of Okinawa to rise to the surface and the main styles to establish their position even more. This article also follows this trend although it’s the most koryu-esque of the four: it’s about a style that takes pride in the fact that it doesn’t have any connection with the competition karate that has become part of the Olympics and about its soke, a 75-year old who has been practicing karate for 70 years.

The soke is Meitatsu Yagi (b. 1944), son of Meitoku Yagi (1912-2003), a student of legendary Goju-ryu founder and one of the Meiji Period’s great teachers who shaped karate in the form we know it today, Chojun Miyagi (1888-1953). Meitoku Yagi studied under Chojun Miyagi from the time he was 15 until the latter’s death and then opened his dojo, the Meibukan where he kept teaching until his death at the age of 92. Meitatsu Yagi, started learning karate from his father when he was 5 years old and in the course of the next 50 years, learned the whole curriculum of Meibukan’s Goju-ryu, both as transmitted by Chojun Migyagi and as developed by his father. He has traveled the world extensively even living for a few years in the US, has written books and has done a lot of work to keep karate alive in his native Okinawa as well. 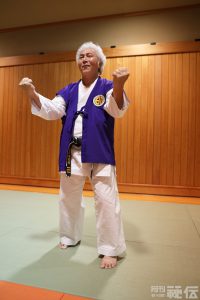 The seminar of course Meitatsu Yagi also teaches in Japan: his organization, the International Meibukan Goju-ryu Karate-do Organization has five dojo in Japan, two of which are in Tokyo and one headed by Meitatsu Yagi’s elder son, 8th dan kyoshi Akihito Yagi. It was during a seminar in Tokyo, actually held to commemorate the opening of the Meibukan’s Tokyo branch, at the well known to martial arts’ practitioners Chuo Sports Center in Hamacho that we had the chance to meet Meitatsu Yagi soke and his son Akihito Yagi kyoshi, sit down with them for an interview (you can read some of its highlights below, in a separate section of this article and watch the video online in XXX) and see how they teach their special brand of Goju-ryu and how they preserve the legacy of Chojun Miyagi in the 21st century.

There were about 45 students participating in the seminar; about one third of them were children and this is always a good sign, demonstrating that the art is passing down to another generation, now the fifth since the time of its founder. The first part which was very exciting, especially for someone like this writer, not very well versed in the history of karate in general and of Goju-ryu in particular, consisted of a brief lecture by Yagi soke on the beginnings of the style, the time of Chojun Miyagi, how Goju-ryu took its name and how his father, started practicing under the founder and ended up becoming the student closest to him -to the extent that when Miyagi died, his family gave Meitoku Yagi his practice uniform and his belt! 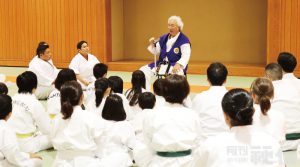 Incidentally, and this was even more fascinating for me since I was fortunate enough to have studied the book thoroughly 15 years ago, when I translated it in Greek, the name “Goju-ryu” comes from what many consider “the Bible of karate”, “Bubishi”. Originally a Chinese military manual, one of its incarnations contains (among many, many other things) information about Shaolin White Crane boxing and when it was brought to Okinawa, it was used by local teachers as a resource for the creation for karate. In one of its chapters, the “Eight Poems of Boxing” there is the line “Hou Goju Donto” which could be translated as “depending on the situation the body changes between hard and soft through inhaling and exhaling”. Meibukan’s interpretation of the saying is that inhaling and exhaling is both hard and soft -just for the record, the English translation by Patrick McCarthy, published by Tuttle which we used for the Greek translation was “Inhaling represents softness while exhaling characterizes hardness”. When, in the 1920s, Chojun Miyagi wanted to present his art in the Japanese mainland, he chose this “goju” i.e. “hard and soft” as an appropriate name for it and every martial arts practitioner will agree that the concept it expresses is one of the most important in any art! 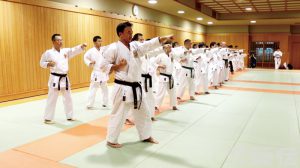 After Meitatsu Yagi sensei’s fascinating account, it was time for action to follow theory! Participants stood in lines and guided by Akihito Yagi sensei, performed a series the punching, kicking and blocking kihon waza (basic techniques) that are the building blocks of Goju-ryu; contrary to what one sees in other karate styles, the stances were narrow and more upright and the movements were closer to natural walking. Of course there were deep stances like shikko dachi –I doubt there’s any style of karate that doesn’t have them because of their stability, especially when blocking- but for the most part the body was organized in a very natural and not at all over-elaborated way, which brings to mind pictures of Okinawan karate masters from the late Meiji and Taisho periods. 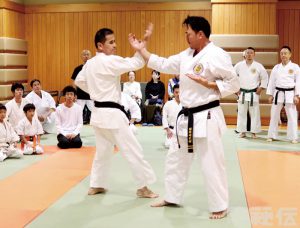 The kihon waza gave their place to two partner exercises that are characteristic of Goju-ryu and the Meibukan’s teachings: they are kote-gitae and kake-te. In the first, the two practitioners stand facing each other and exchange high and low forearm blocks while at the same time moving and exchanging positions -with time the blocks (which can be also hits, of course) become faster and stronger and the practitioners need to be more focused since the rapid exchange must not be interrupted even when they exchanging positions passing back-to-back (yes, I know this movement is hard to understand -check the pictures!) This exercise is an example of the “tanren” or “forging” of the body that has given traditional karate practitioners the reputation for being able to withstand any hit. 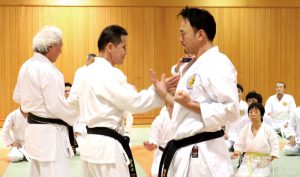 If the kote-gitae expresses the “go”, the hard side of Goju-ryu, the keke-te expresses the “ju”, the pliant. In it, partners stand once again opposite each other and try to control each other’s arm and hand movement in a circular way. The point of contact between the two hands is the lower edge of the palm i.e. the area opposite the thumb, used for shuto/knife-hand strikes. In a way the exercise brings to mind the push-hands exercise or tuishou although the way performed by the Meibukan members was much more intense and demanded considerably more strength; I tried it against one of the advanced students of the Tokyo dojo and even though I haven’t found my arms and hands lacking in strength it was really hard to keep up during the whole range of motion. 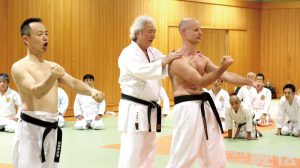 Following the kake-te was what is perhaps the most recognizable part of the Goju-ryu curriculum, the Sanchin kata. Contrary to the popular image of kata where practitioners exchange rapid strikes, blocks and kicks, the Sanchin is much more esoteric with slow movements, audible breathing and visible tightening and relaxing of the body muscles. And I say “visible” because before the whole group started practicing it, the more advanced students took off the top of their keikogi and performed it naked from the waist up while Meitatsu Yagi sensei moved around slamming various parts of their bodies with open hands. This is the traditional way of performing and testing the kata and allows the teacher to gauge each student’s level of understanding of breathing and use of muscles. Even though it’s the least “spectacular” aspect of the practice, to me it was both an amazing exhibition of body control and a very interesting way to research what the body can do.

The next part was probably what even non-martial arts people would immediately recognize as “karate”: the partnered exchanges of attacks, blocks and counter-attacks called “kumite” which, in Meibukan’s system are only “yakusoku”, that is, pre-arranged. According to the Meibukan history, these twelve kata (because they are kata!) come from Chojun Miyagi himself and cover a wide range of attack and defense possibilities; seeing them performed by Akihito Yagi sensei and one of the Meibukan advanced students as a model before the whole class tried them was an education, and it made clear how effective the school’s karate can be and how broad their repertory of techniques and strategies is including throws, counter-attacks from kneeling position, kicks in joints, arm-length grappling, aikido-like body-movement evasions and more. And even though the participants had performed everything so far very seriously, you could tell that they enjoyed this part of the seminar even more!

The seminar ended with the participants standing in a circle and performing various kihon waza in ten-repetition sets; they all, beginners, advanced, young and old took turns in counting out loud the repetitions and that gave an air of solidarity even to us outside observers. Then came the time for pictures, small talk and friendly chat and the room cleared to be prepared for the next group of martial artists -the group using it before the Meibukan seminar was kendo but I didn’t stay to see what would follow. And it didn’t matter: spaces like that of the Chuo Sports Center are home to so many groups that they don’t even feel like dojo, especially when the art practiced is as sui generis as the Meibukan’s. I haven’t been to the honbu dojo in Okinawa’s Naha, but I’m sure it’s much smaller, warmer and with more personality -like all small-town dojo (compared to Tokyo’s millions, Naha with its 320.000 people is a small town).

A world where there’s no free-sparring 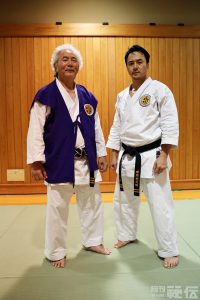 Still, Meitatsu Yagi sensei carries with him over a century of history and almost a century of practice and this manages to transform even in a faceless space like that of the Center. For three hours we were transferred to a world where there’s no free-sparring because “free-sparring is sport and karate is not a sport but self defense”, where “kata” doesn’t mean snapping keikogi sleeves and Kabuki-like stares and where 75-olds have arms, abs and thighs that would make your palms hurt if you slapped them. This isn’t like any karate I’ve seen so far and it certainly isn’t like any karate we will see at the Budokan in next year’s Olympic Games but it’s a karate that builds fascia and ki and character and people who you’d want to have on your side in a fight against anyone. I’ve often said that I started my martial arts’ involvement with karate -I probably won’t end it with karate but if I was too, the Goju-ryu of the Yagi family would probably be my choice.