Many of us aikidoka are eager to read about the lives of the various pioneers of our art. There is no shortage of colorful and inspiring stories. One of such people is early American aikido practitioner Virginia Mayhew. Though her name is mentioned at times by better known instructors, few resources are actually available about her life. Today I would like to look back into her incredible life and highlight her influence on the development of our art.

Virginia Bailey was born on September 21, 1928 in New York City. She dropped out of high school at age 14 and was hired by famous costume designer Gilbert Adrian to become the model for his “Saint and Sinner” perfume line ad campaign, which ran in Vogue and Town & Country magazines from 1944 to 1946. She later became the face for Charbert’s “Breathless…Fabulous” perfume line. 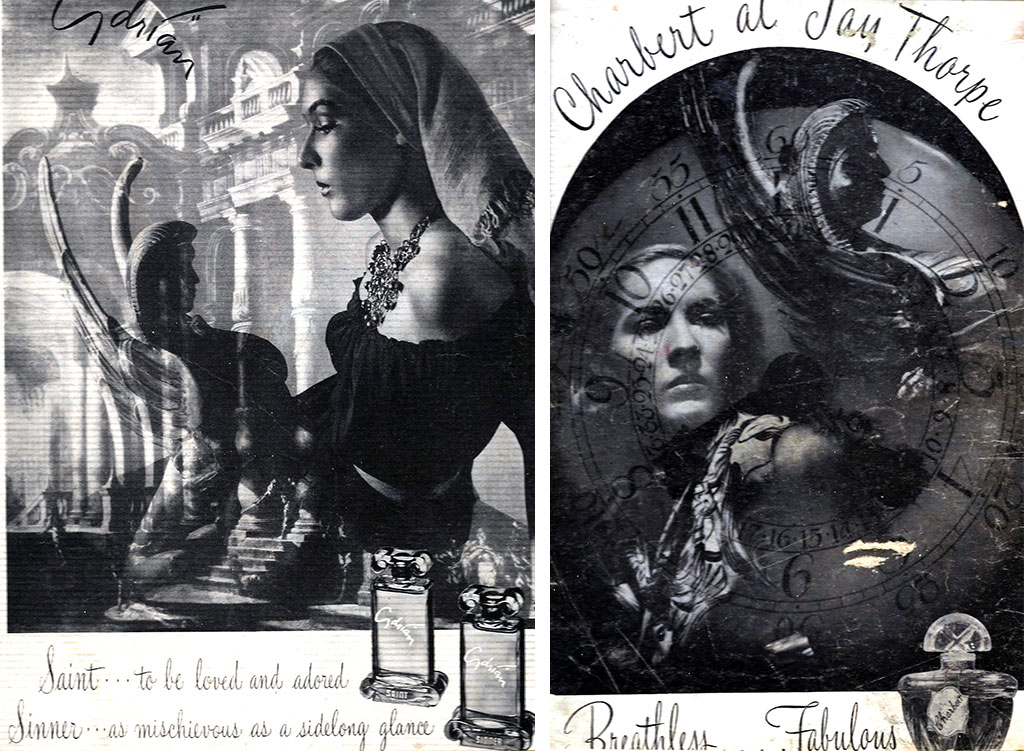 Virginia Mayhew on the ads of the “Saint and Sinner” and “Breathless… Fabulous” perfume lines.

Virginia moved to Greenwich Village, which was New York’s hub of revival in art, music, politics, literature, and ideas. She played the guitar and performed folk songs at various local night clubs. Around 1953, she spent about two years in the Caribbean performing songs at nightclubs in Haiti, Santo Domingo, and the U.S Virgin Islands. 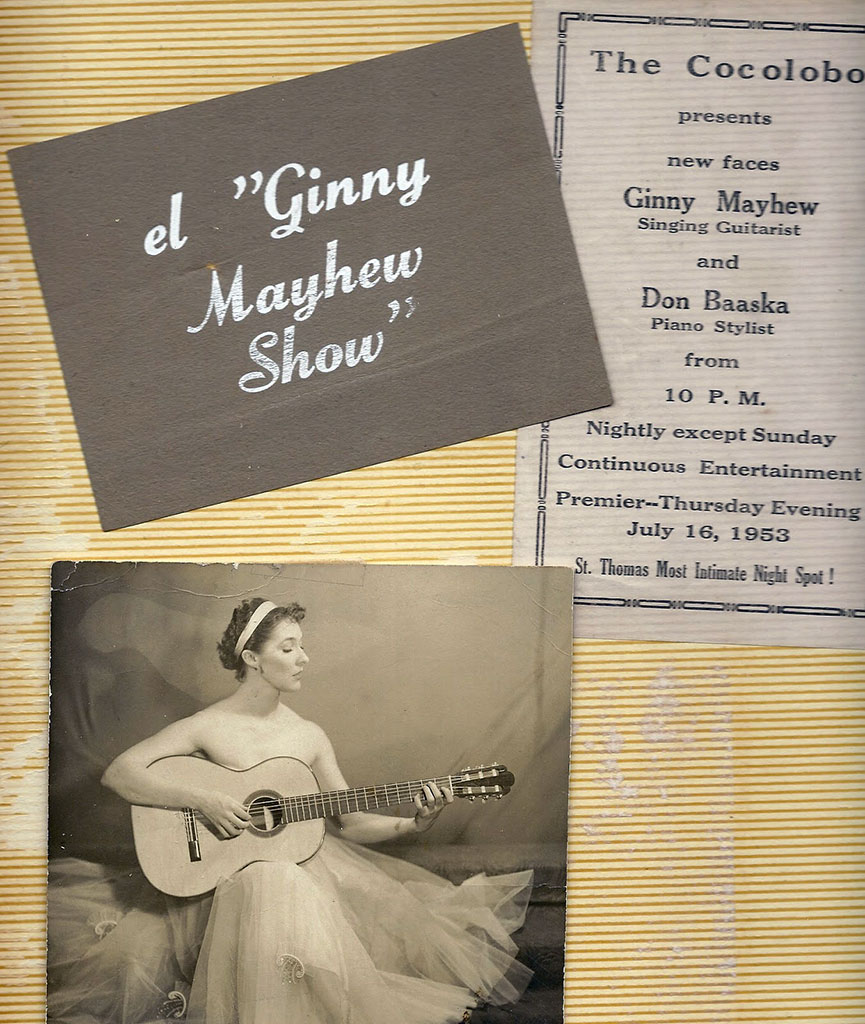 Clippings from 1953 flyers advertising one of Mayhew’s performance on the U.S Virgin Islands

Once she got back to New York, Virginia discovered Japanese budo through judo, which she studied for five years under George Yoshida of the “New York Dojo”. There she met Eddie Hagihara, a fellow 2nd dan judo student and the two eventually got married. 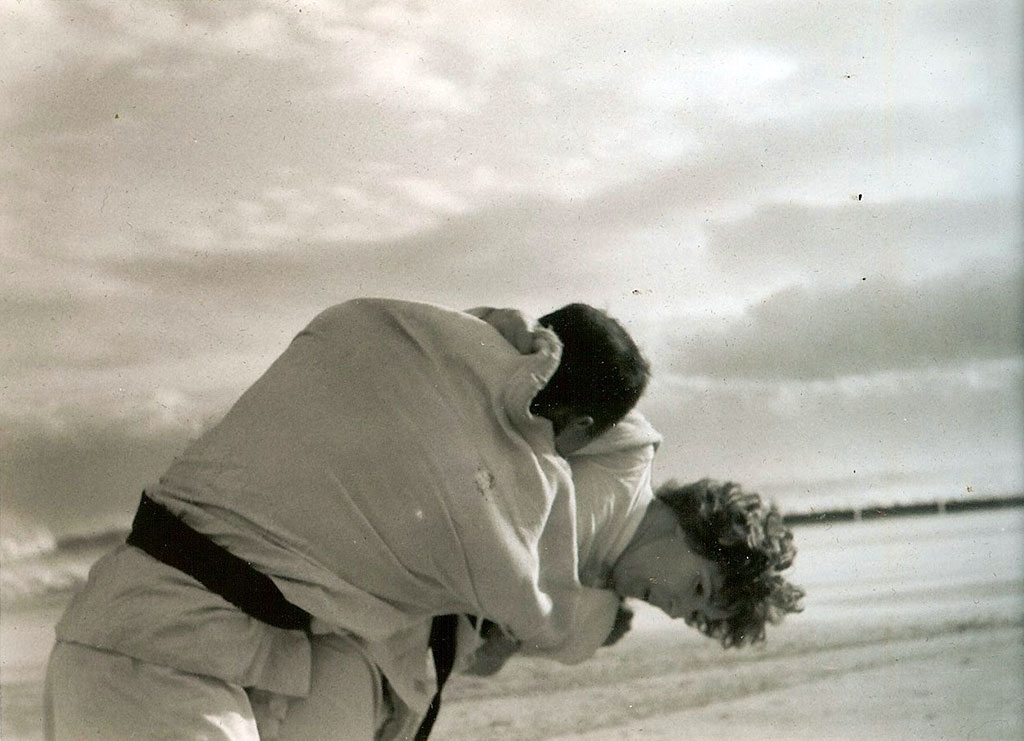 Virginia got her shodan after about five years of practice, but she became increasingly dissatisfied with judo practice due to the fact that it focused too much on sporting aspects, rather than on spiritual principles. Spiritual development would indeed be a continuous search throughout her life and when she heard about aikido, a martial art that focused on love, compassion, and cooperation, she decided to find out more about it. She and Hagihara began studying aikido in 1962 with Ohara Yasuo (小原 裕雄). Ohara, who was a nidan, had been teaching informally at New York University since 1961.

Foundation of the New York Aikikai

Eddie Hagihara, Virginia Mayhew, and a few others helped Ohara set up the New York Aikikai in 1962 at 25 West 19th Street. Practice picked up and students started to join. After she got her shodan, Virginia traveled to Japan for the first time during the Spring of 1963 in order to learn from the founder of AikidoShe spent about a year training at the old Aikikai Honbu Dojo and she had the opportunity to meet and take ukemi from Ueshiba Morihei. Like so many other people before her, she was mesmerized by the old master.

O Sensei was having fun. He was natural. Whatever he wanted to say that day, he said it. He could just as easily chuckle or smile as he would grunt or scream, but he got pleasure from every moment.
Virginia Mayhew

O Sensei allegedly told her that because she was a woman, she would understand that true strength and power comes from within. Being a fiercely independent woman, she seems to have liked the rather informal ways of O Sensei, compared to that of other Japanese men.

I never saw a difference between the way O Sensei treated women and the way he treated men.
Virginia Mayhew

Mayhew later reported that she was well used to falling thanks to her judo experience and that therefore, she always knew how and why she ended up on the mat, but when O Sensei threw her for the first time, she was unable to understand exactly how it happened. She reckoned that O Sensei seemed to have a strength of spirit that went beyond his physical movements.

One day, O Sensei immobilized me without direct physical contact with me […] His strength was hidden behind the physical.
Virginia Mayhew

A report of her stay in Tokyo was published in the Aikido Shinbun (合気道新聞) issue of June 10, 1963. The photo shows Virginia working hard at the Aikido Headquarters. The uke is Mr. Arakawa. 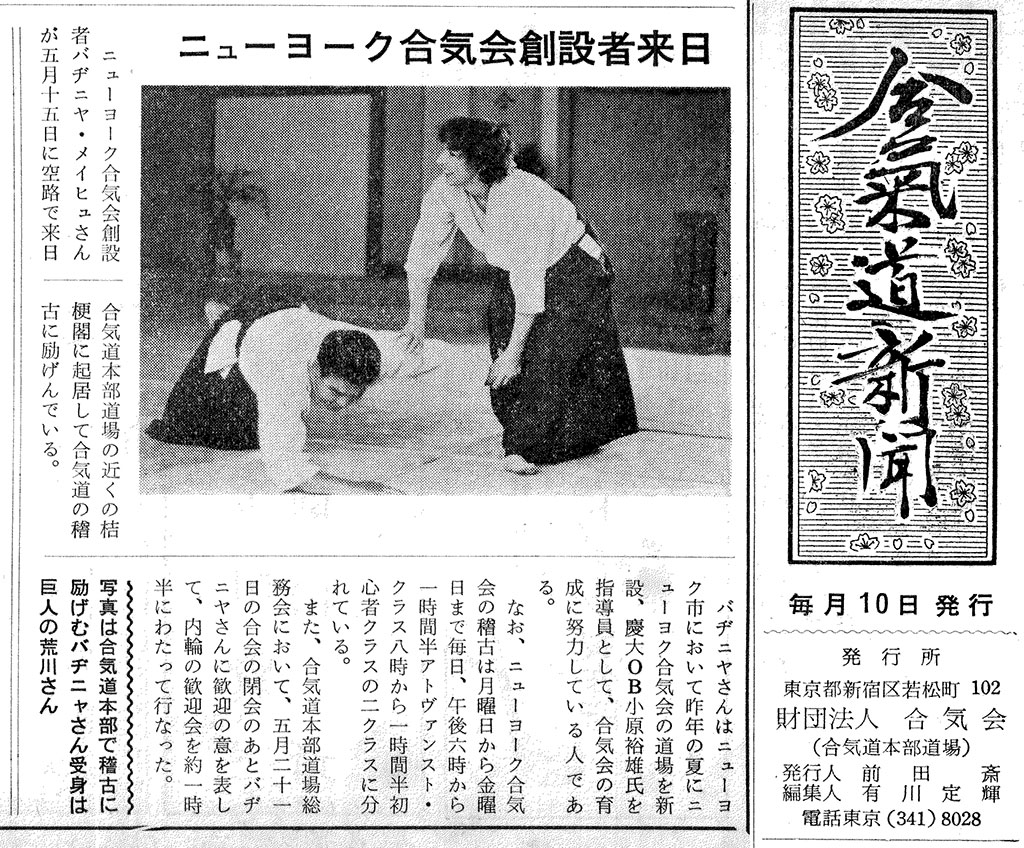 Like a lot of foreigners at the Honbu Dojo, Virginia was especially inspired by Tohei Koichi, who had brought aikido to the States and who was one of the rare instructors with a good command of English. Another instructor who could communicate in English was Yamada Yoshimitsu, who later recalled the following :

At that time all aikido outside of Japan was controlled by Tohei Sensei. So when this woman called Virginia Mayhew came to Japan, my family and I took care of her personally and we became friends.
Yamada Yoshimitsu

When she got back to the US, the New York Aikikai members gave a demonstration at the United Nations. 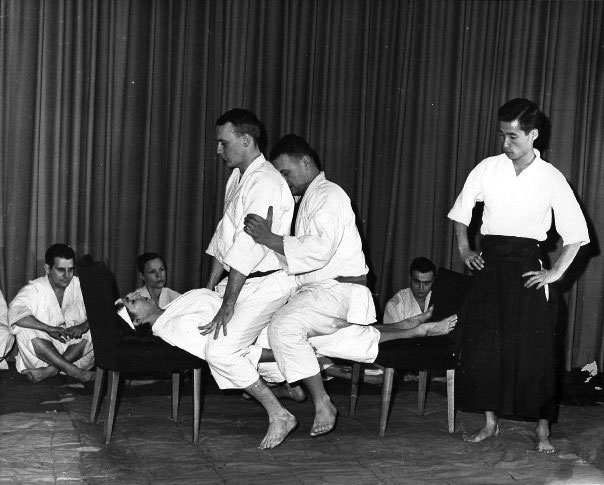 Virginia Mahew demonstrating Tohei Koichi’s ki exercises during a demonstration at the United Nations. Ohara Yasuo is standing on the right.

Even though the dojo became increasingly successful, Virginia often took side jobs to pay the rent. She also went through a great deal of effort to generate interest around aikido. Her and fellow students demonstrated aikido on TV on several occasions, including on the Tonight Show with Johnny Carson in 1962.

When Ohara moved back to Japan in 1963, Virginia took over the role of the director of New York Aikikai. She managed to get aikido talked about in several newspaper articles, and she was instrumental in organizing aikido’s participation at the New York World’s Fair from May 11 to 17, 1964. In order to fully prepare for this event, she made another short stay in Tokyo in February 1964, which was reported in the April 1964 issue of the English version of the Aikido Newspaper. 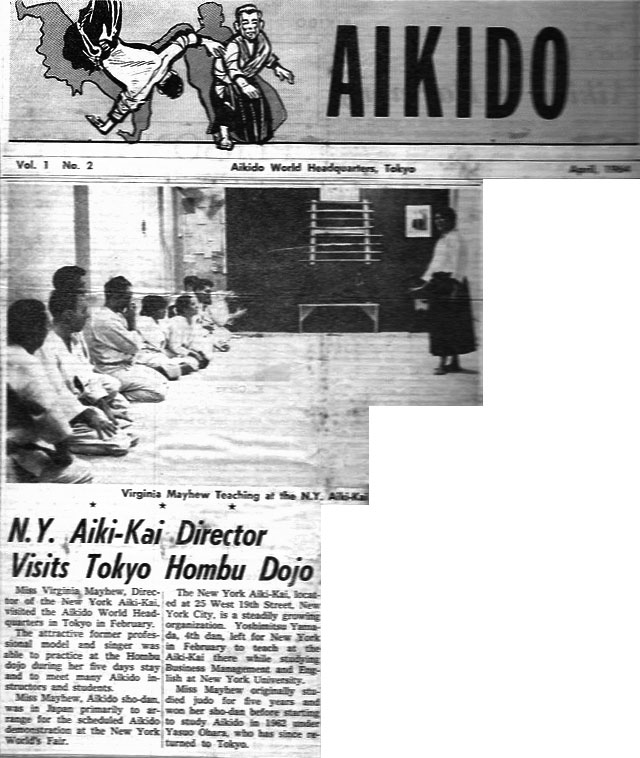 Virginia came back to New York in February 1964 accompanied by Yamada Yoshimitsu, a 4th dan uchi deshi of the founder.

Then, in 1964, I came to New York for the World’s fair. The plan was for me to go with Tohei Sensei to the Japanese Pavilion and perform a demonstration. But he was unable to go on that trip. So I came by myself.[…] I met my friends in New York and went to the New York Aikikai. I spoke to the members and became Chief Instructor.
Yamada Yoshimitsu

Now free from the responsibility of running the New York Aikikai, and recently divorced from Hagihara, Virginia traveled back to Japan in the aim of studying aikido as a full time Honbu Dojo student. On her way, she stopped in Hawaii for three weeks during the winter of 1964. She got the chance to practice with a number of instructors there, as well as with Tohei Koichi. 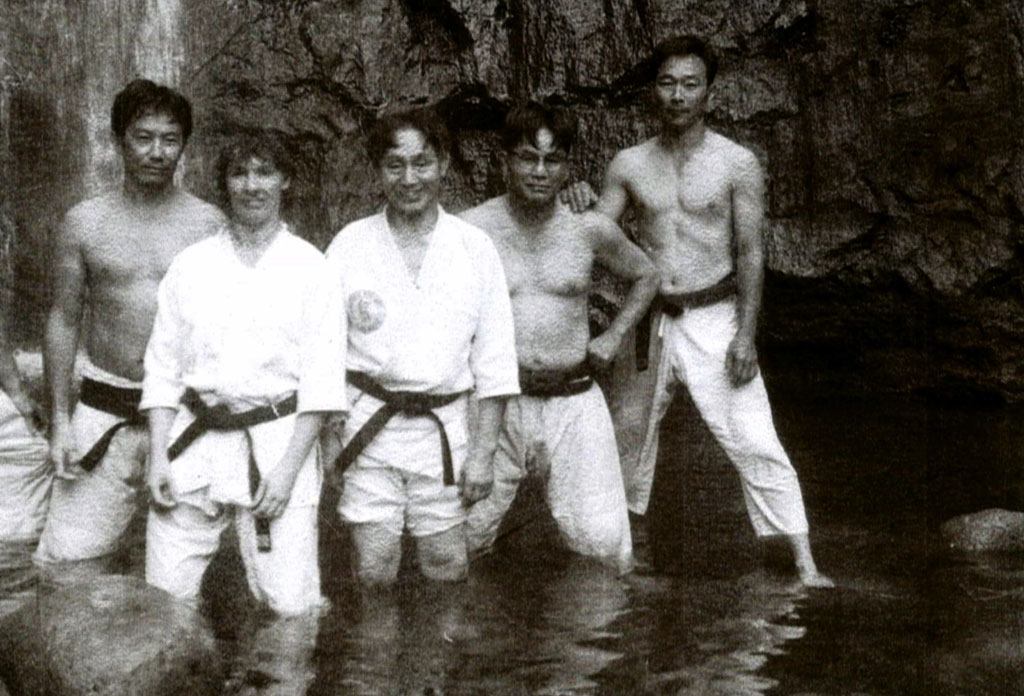 When she eventually arrived in Tokyo in December 1964, Virginia became acquainted with Henry Kono, a Japanese-Canadian who had serendipitously ended up at Honbu in October 1964. The two forged a close friendship that would last a lifetime. Being both in their late thirties, they shared a particular interest in the overarching principles that were behind the aikido movements, rather than the physical side, unlike many of the younger students. Still in the pursuit of spiritual growth, Virginia also regularly engaged in zen meditation. 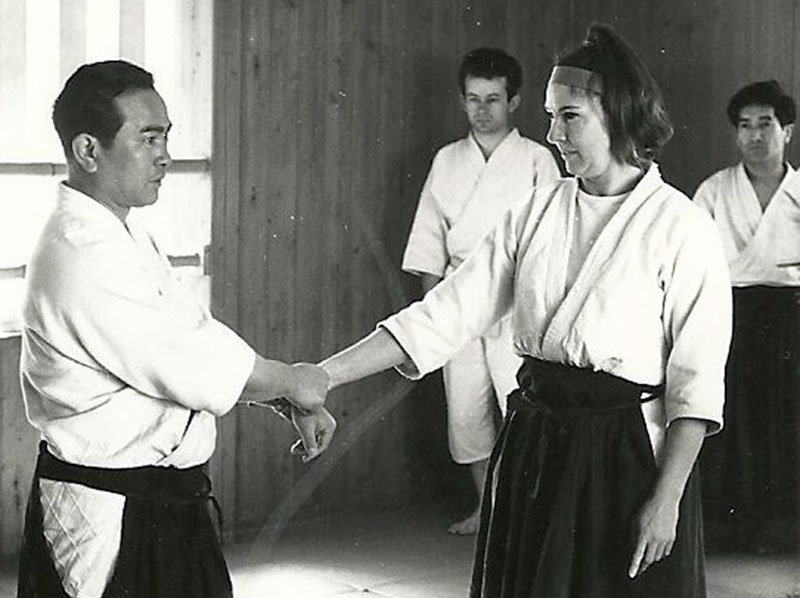 Tohei Koichi teaching Virginia Mayhew. At the back on the right is Henry Kono.

They formed a relatively close group of foreigners along with Alan Ruddock, Kenneth Cottier, Terry Dobson, Joanne Shimamoto, George Willard, and a few others. 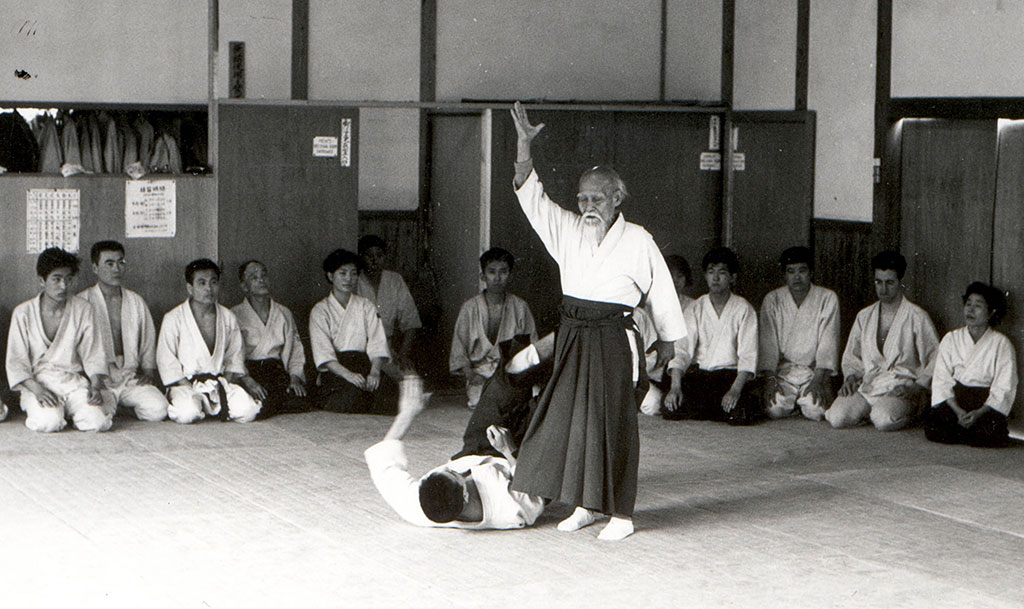 O Sensei teaching at the Hombu Dojo. Ruddock is visible, second from the right.

While she could not be an official uchi deshi because of the fact that she was a woman, she did have access to O Sensei because she helped out in his household by cooking and cleaning for him. 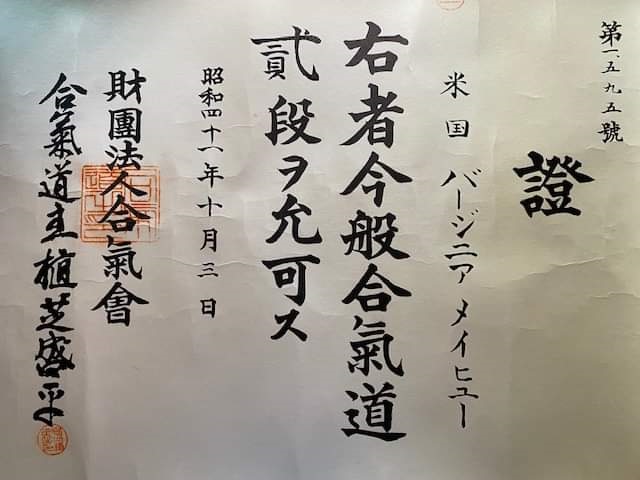 Aikido Shinbun issue from August 1966 showing the list of students who had perfect attendance during the shochu geiko, the summer training, which took place from Monday, July 25th to Wednesday, August 3rd.

In 1966, Virginia received permission from O Sensei to start a dojo in hong Kong and before leaving, he presented her with a handwritten scroll so that she could display it in her dojo. 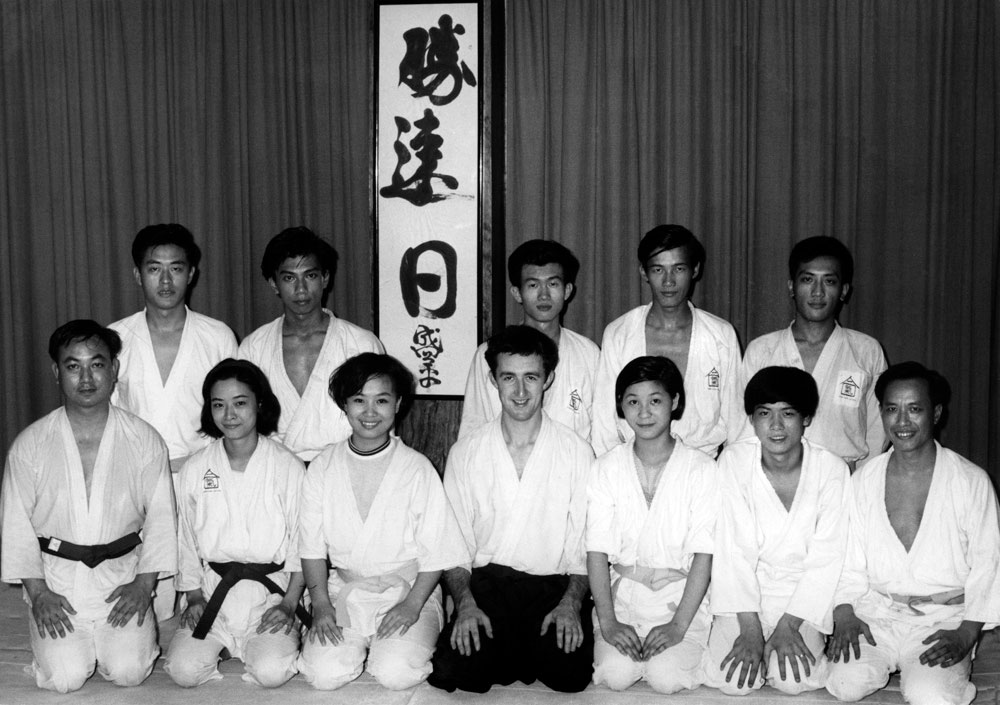 Alan Ruddock posing with the students of the Hong Kong Aikikai in front of a calligraphy offered by O Sensei to Virginia Mayhew. The characters are 勝速日, part of one of the founder’s favorite expressions from the Kojiki: 正勝吾勝勝速日.

She arrived in Hong Kong on a Tuesday. Wasting no time, she put up a demonstration the following Friday at the YMCA in Kowloon and began teaching classes the Monday after. 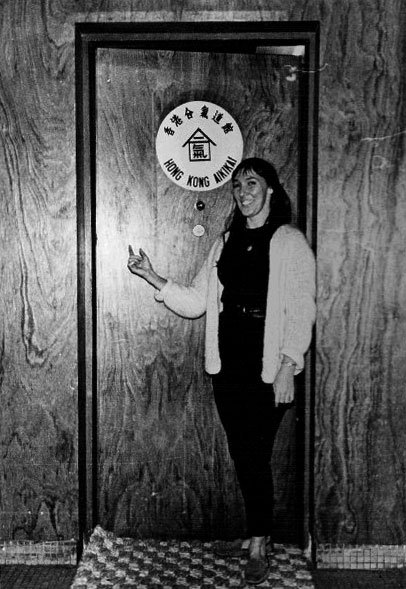 Virginia Mayhew posing in front of the Hong Kong Aikikai

The following year she secured a more permanent location in Tsim Sha Tsui, Kowloon and established the Hong Kong Aikikai. She also taught in a number of other venues. She had close to 300 students in total at the height of her stay in Hong Kong. 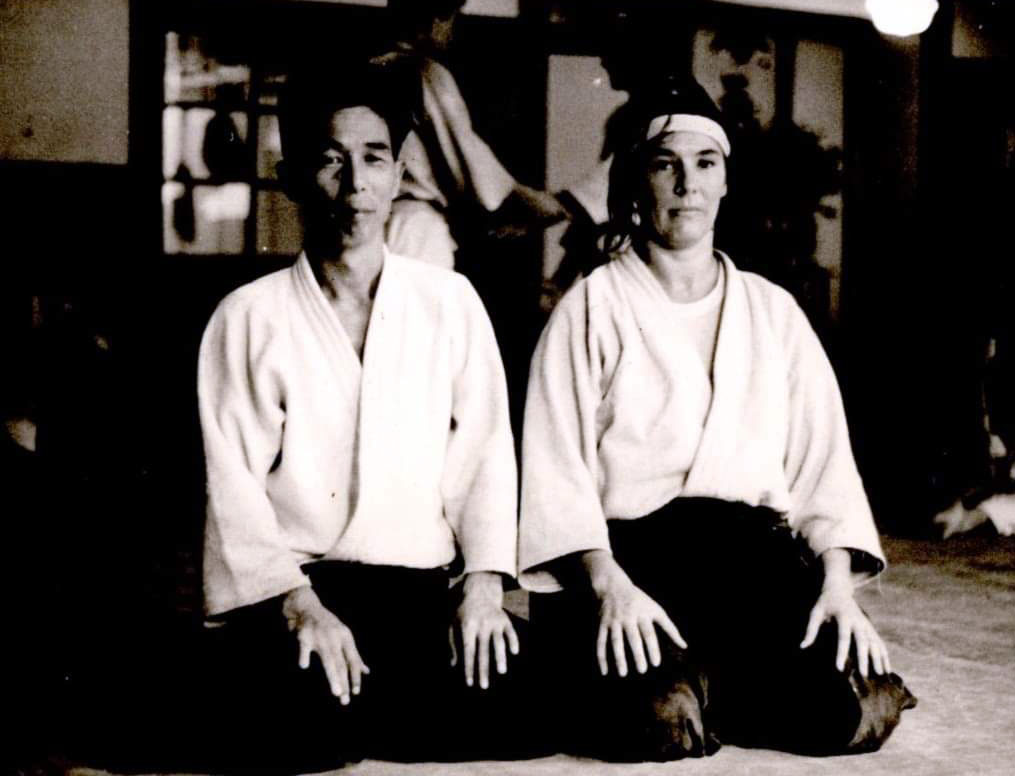 Given this success, she realized that she needed support with the teaching, and both Kono and Ruddock came to help her on several occasions. Alan Ruddock actually spent several months teaching in Hong Kong at the end of his stay in Japan, prior to returning to Ireland. 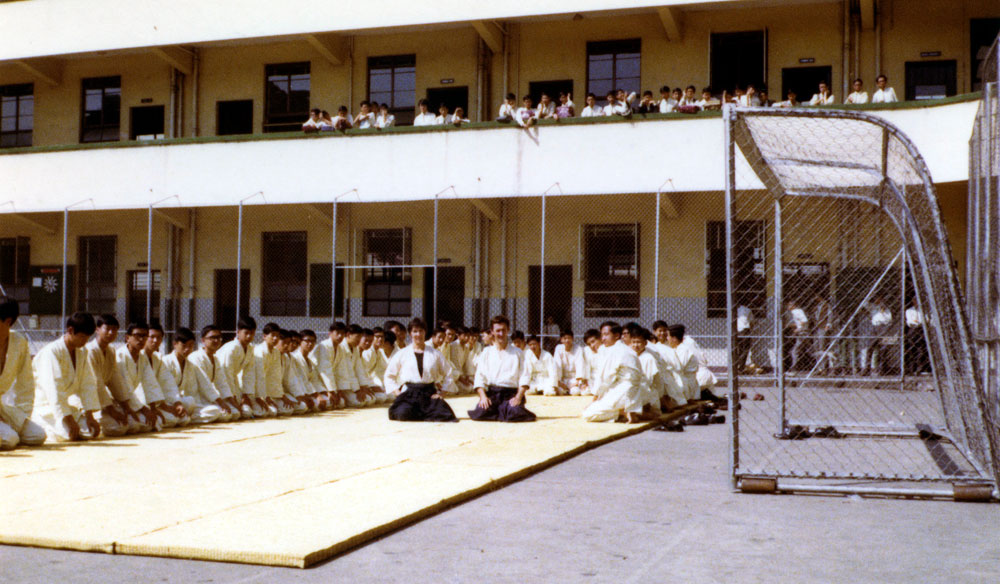 According to one of her students at the time, Virginia also used the skills that she had acquired on the tatami in real life. She allegedly assisted a Royal Hong Kong Emergency Unit cop escape from a mob of rioters in the Sham Shui Po district, Kowloon. The man is said to have become her student afterwards.7

After Ueshiba Morihei’s passing on April 26, 1969, Virginia decided that it was time to move on and she returned briefly to Tokyo in the aim of arranging her replacement. This proved unsuccessful and the school ended up without an instructor for about two years, until Ken Cottier was sent by the Aikikai to restart the organization. He founded the Hong Kong Aikido Association, which is still running today.

I went to Hong Kong and established the Hong Kong Association. […] These people [had] trained with Virginia Mayhew so as soon as I got there, I graded them to 2nd kyu, I thought they were well worth 2nd kyu, they had had quite a bit of exposure.
Kenneth Cottier 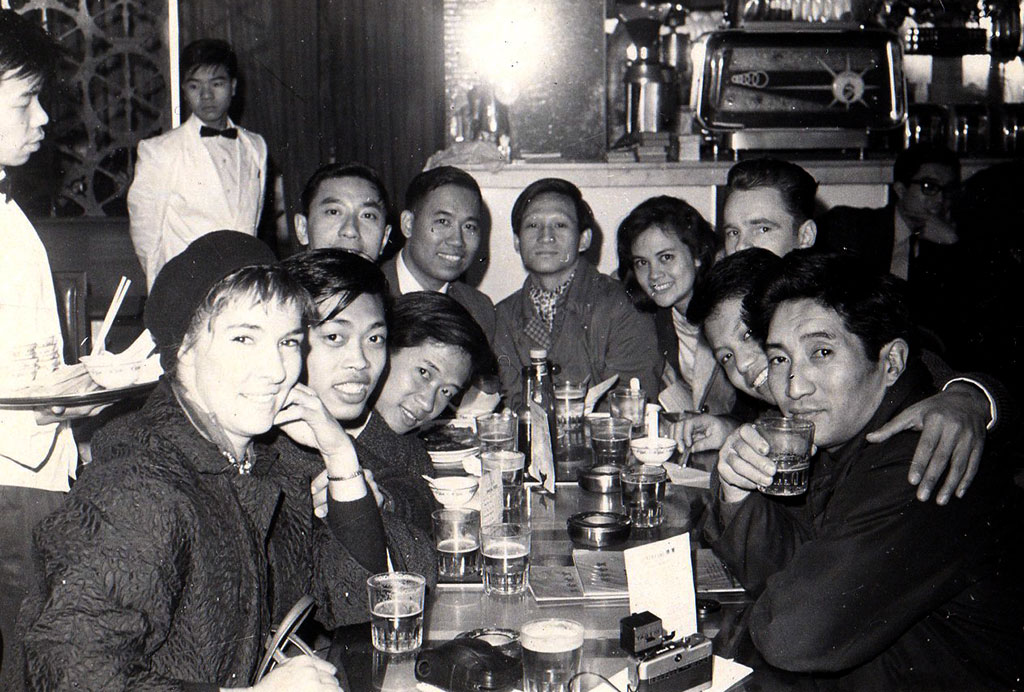 Virginia Mayhew, Henry Kono, and their students having a drink after an aikido class.

Return to the United States

Virginia returned to the United States. She continued her study of awareness and centering through meditation, which led her to India, where she learned from a guru for some time. While she continued to practice Aikido with like-minded friends after she returned to the US, she no longer held any formal aikido position. Virginia Mayhew later suffered a stroke. She passed away on October 26th, 2006 at age 77. 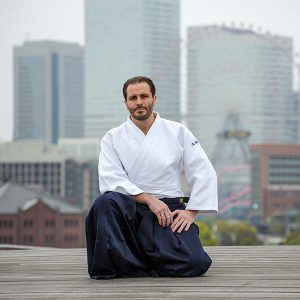