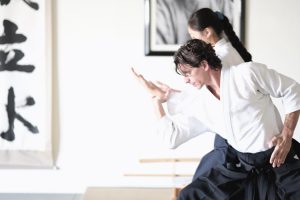 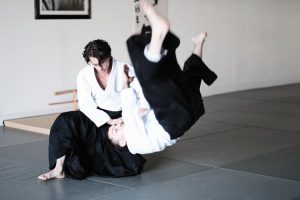 In this interview we speak with Josh Gold, an American Aikido instructor who has been at the leading edge of promoting Budo in North America. Mr. Gold has over 30 years of Aikido experience and is one of the most visible leaders in the English speaking Aikido world. He is Executive Editor of Aikido Journal, the world’s largest Aikido media publication, and Dojo-cho of Ikazuchi Dojo, a prominent California-based Aikido dojo with a 20 year history. And in late 2019, Josh co-founded Budo Accelerator, a new educational nonprofit organization with plans to use Budo to improve the lives of thousands of teens and college students from low-income communities around North America.

Mr. Gold is also a notable speaker on the martial art of Aikido, having led presentations for Fortune 500 companies and at premier events and idea festivals like Summit LA19.

Earlier in his career, Josh built over 15 years of entrepreneurial and executive management experience in the technology sector, having founded a series of start-ups and led special projects for clients such as Sony, Nissan Motors, Disney, and Formula One.

–Thank you for joining us today Mr. Gold.

Josh Gold: It’s a great pleasure to speak with you and to connect with your audience in Japan.

—Can you please tell us about your history with Aikido Journal?

Aikido Journal (originally Aiki News) was founded in California in 1974 by Stanley Pranin. He moved to Japan in 1977 and lived there for 20 years, researching,  documenting, and publishing a large portion of the world’s history of Aikido. Aikido Journal is the most important single producer and publisher of historical research related to the birth and development of Aikido. 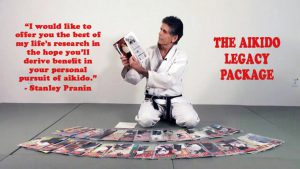 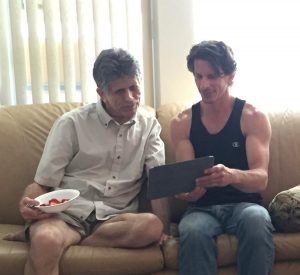 Josh Gold with Stanley Pranin in 2017

Before Stanley passed away in 2017 he named me as his successor. I was surprised he asked me to undertake this responsibility since I was not his direct Aikido student and certainly not a historian. I knew of him since the early 1990’s but only got to know him personally in 2012. I think he saw me as someone who could take what he built over a period of 45 years and transform it in a way that both preserved the spirit of the Journal and revitalized it for a new era.

Now Aikido Journal reaches over 500,000 people a year across more than 60 countries. We’re the largest Aikido-based media publication and have created the world’s largest knowledge base on the art of Aikido with thousands of published articles and an archive that contains many times more information in the form of interviews, photos, films, audio recordings, and research findings.

—What are your plans for the future of Aikido Journal? 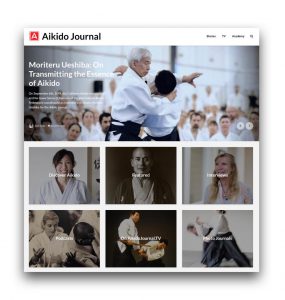 Stanley Pranin was a researcher and historian. His mission was to tell the story of the birth and development of Aikido. In contrast, I’m driven by the desire to innovate and create. I believe Stanley was successful in his mission to document the history of Aikido and feel that Aikido Journal’s role should now be to unify, inspire, elevate, and grow the global Aikido community. We’ve modernized our technology platform, invested in professional media production,  made our content more accessible to a wider audience, and shifted our focus to put a greater emphasis on telling stories of today and sharing the community’s ideas and visions for the future of the art.

—What are some of the projects Aikido Journal has done recently? 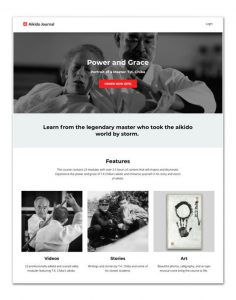 We’ve done some great interviews, like the one with Dan Inosanto which you published recently. Mr. Inosanto and I are both very thankful that you shared his and Bruce Lee’s Aikido experiences with your audience in Japan. Aikido Journal also recently released a comprehensive video course on Kazuo Chiba. It’s a beautiful artfully crafted showcase of his Aikido through the years. A number of Chiba Sensei’s students who watched the course told me that it made them cry. I’m very proud of this effort. 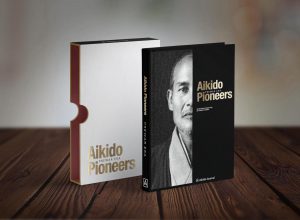 Aikido Pioneers of the PreWar Era

We also made our first return to print publishing in over 20 years. With the support of the Aikido community in the form of a crowdfunding campaign, we created a large-format hardbound limited edition version of one of Stanley’s books: Aikido Pioneers of the PreWar Era. It’s unlike any Aikido book that’s been produced. All of these initiatives were done in the pandemic lockdown.

—Outside of Aikido Journal, what are you doing to promote Aikido and Budo in the United States?

I introduce Aikido to some of the world’s leading thinkers, influencers, and organizations. One thing I learned through Stanley Pranin is that Morihei Ueshiba, the founder of Aikido, surrounded himself with the business, military, and political elite of Japan, and that this provided opportunities that played a significant role in Aikido’s development. I’m taking a similar approach in America. These people and organizations can be great allies, advisors, and sources of inspiration.

I’m also very excited about Budo Accelerator, a new educational nonprofit I recently co-founded. Budo Accelerator has big plans and if we are successful, it has the potential to change the face of Budo in the West. 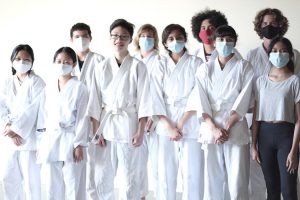 —Tell us about Budo Accelerator. 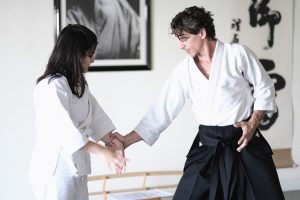 Budo Accelerator uses traditional Japanese Budo as a platform for leadership development and elevating young people from low-income families and communities. We combine Budo training with modern learning science and technology to create programs for teens and young adults. Even in the pandemic, we brought together students from all around North America to participate in our programs – in person and online. We’ve had world-class experts in education, psychology, and Budo designing our curriculum, and the results have been great. We’re focused on leadership development, workforce readiness, emotional intelligence and resilience and have created significant measurable and repeatable gains in these areas for our students. We’ve also connected many students with mentors and advisors from the Aikido community. 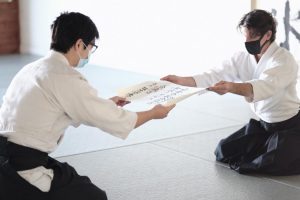 This year, we plan on working with 100-200 students from around North America with a goal of designing programs that can scale to reach 1,000 or more students next year. In the next few years we hope to serve 10,000 or more students. By doing this, we can give new opportunities to lower income youth and underrepresented groups, bring a large number of new young people into Aikido dojos, and develop future leaders of America who embody the ethics and principles behind Japanese Budo and Aikido.

—Those are very ambitious goals. Why do you think you can succeed?

We have a clear vision, a strong team, and we are building tremendous support within the Aikido community. We already have dojos in many major metro areas in America who are excited to partner with us to run programs.

The Team and Dojo

—Speaking of your team, you said you have a co-founder. Can you tell us a bit about him? 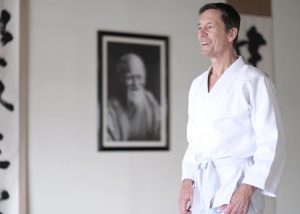 My co-founder is Mark Tercek. He began Aikido when living in Japan over 40 years ago and after a long hiatus, he made an enthusiastic return to Aikido in 2019. While I have a lot of start-up experience that will help us build Budo Accelerator through our early stages, Mark has tremendous experience growing large organizations. From 2008-2019, he was CEO of The Nature Conservancy (TNC), the world’s largest environmental nonprofit. Under Mark’s leadership, TNC grew to over $1 billion US in annual revenues with over 1 million donor members. He raised over $7 billion in his time there and grew TNC operations to span over 70 countries, leading massive global conservation projects and climate change initiatives. Prior to that, Mark was a major force on Wall Street for over 25 years. He was a partner at Goldman Sachs and ran most of the firm’s major business units in his time there. He’s also the author of Nature’s Fortune, a bestselling book that has been praised by people such as Bill Clinton (former President of the United States),  Hank Paulson (former U.S Treasury Secretary and CEO of Goldman Sachs), and many other leaders from the worlds of politics, business, and science. 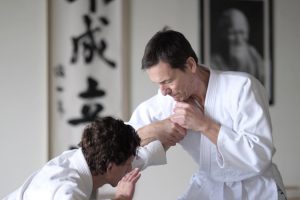 —He sounds like a great ally and a valuable member of the Budo Accelerator team.

Indeed. He’s been a steadfast supporter and we look forward to tapping into his expertise even more when the time comes to move from our development stage into a scaling stage.   Mark and I are both excited to build Budo Accelerator as a way to do social good and give back through a Budo-based initiative.

I’m also very thankful to have the support of many teachers and organizations within the Aikido community, starting with my own teacher of 30 years, Haruo Matsuoka. Kei Izawa, Chairman of the International Aikido Federation, has also been a wonderful supporter and mentor to me. We’ve also had the support of many senior leaders from private sector companies such as Google, IBM, and Aston Martin. We hope some of the larger Japanese companies with a presence in the United States will see our mission as worthy and will also support our efforts. 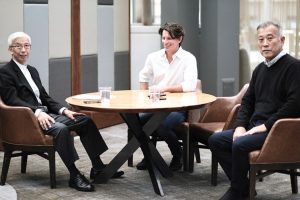 All work together in Dojo

—Where do you find the time and motivation to undertake all of these initiatives?

It is a lot to run three organizations, but they all work together and support each other.

My dojo keeps me grounded and in touch with the challenges and joys my fellow Budo dojo-chos experience. Ikazuchi Dojo is also an extended family for me. It’s a place where I can learn, grow, teach, and challenge myself and others. The dojo also serves as a media production studio for Aikido Journal and a laboratory for testing Budo Accelerator programs. 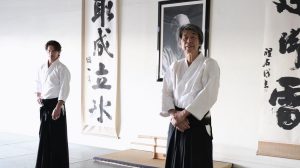 Aikido Journal allows me to build new bridges and friendships in the community and gives me a powerful platform to communicate with the Aikido world. It also gives me access to Budo experts and a deep knowledge base. All of these things allow me to be a better teacher and bring new knowledge and expertise to my dojo. And the vast data and visibility into the Aikido community I have through Aikido Journal allows me to make better strategic decisions at Budo Accelerator.

Budo Accelerator brings new life to my dojo. We have a large and growing group of young people in our ranks. People who would never have had the opportunity to experience Japanese culture or the way of life that is Budo. Their energy, enthusiasm, and insights make our dojo better. And if we’re successful, we hope to bring a wave of young people into dojos all around North America, where through Budo, they can build the leadership skills that will be required to face the great challenges of our time.

It’s my love for the art of Aikido and it’s community, and the potential to contribute and give back in a big way that motivate me. But it would be impossible to do what I do without Anne Lee, my wife. She supports all of these initiatives in so many ways – directly and indirectly. And she keeps me in my best possible mental and physical condition to perform at the peak of my abilities. 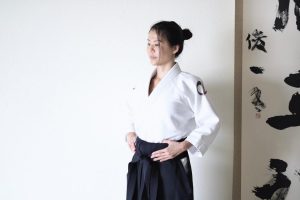 I’d like to thank you again for giving me the opportunity to for this interview. It’s quite an honor to share my perspective and experience with Budo enthusiasts in Japan. Budo changed my life. It’s an important cultural treasure of Japan that I believe can be a powerful force for social good, and by doing so can elevate the status of Budo in North America. I have an ambitious plan to make it happen but need allies and support to bring it to life. Please don’t hesitate to reach out if you have ideas or can help us further our mission in any way. And if you’d like to stay up to date on our progress, please sign up for our email newsletter on our websites. 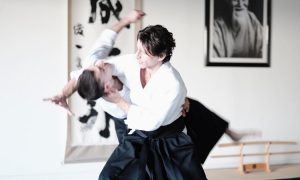