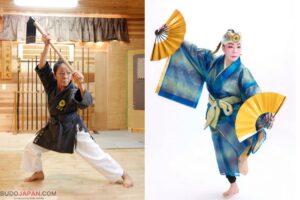 The intrinsic relationship between tûdî and Ryûkyû-buyô has been explained by many tûdî experts. The common physical movements have been passed down from generation to generation and have become the cornerstone of Okinawan performing arts culture. In this interview, we spoke with Taeko Ebata, a Ryûkyû-buyô teacher and practitioner of kingai-ryû tûdî and Matayoshi-kobujutsu, about “gamaku”, the mystery of the dynamics of “martial arts and dance”.

Asato Ankô sensei and his disciple Funakoshi Gichin claimed that the roots of tûdî were in the dances (mêkata) of Ryûkyû. From the alliance of the native ti and the quan-fa (kenpo) originating from China, tûdî was born (which gave rise to the current karate). ) There are various theories among practitioners and researchers about the origin of ti, the origin of karate, but in “Okinawa no Bugi”, a publication by Itosu Ankô and Funakoshi Gichin (1914), it is mentioned that “Okinawa’s own martial art and dances (mêkata) were already practiced, at a time when tûdî had not yet developed into its present form. ”

Mêkata is one of the dances of the Ryûkyû kingdom, which is danced freely to the rhythm of music, the movements of this dance have many similarities with tûdî.

In the following article, Ebata Taeko will educate us about the history of Ryûkyû-buyô and its particular body techniques. At the time of the interview, Hayasaka Yoshifumi, shihan of kingai-ryû tûdî – Okinawa kobujutsu, was also present and spoke in depth about the similarities of the body principles conveyed in Ryûkyû dance and fighting arts. 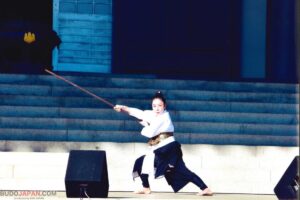 Development and transmission of court dance to the people

I started to learn Ryûkyû-buyô when I was in elementary school. Then, through karate-buyô (a mixture of karate and dance), I became interested in Ryûkyû-tûdî, which I started to study in earnest about 19 years ago. I think that karate has allowed me to deepen the meaning of Ryûkyû-buyô movements. I also practice taiko (Okinawan drum) and sanshin (guitar/banjo/lute.) Taiko also has something in common with karate. When I think about it, all the arts that have been passed down in Ryûkyû, dance, taiko, sanshin and koto have something in common with karate. “

This is how Ebata-sensei explains the relationship between dance and karate.

Because of its wide range of contents, it is difficult to explain Ryukyu-buyo in a few words. In the period of the Ryukyu kingdom, an odori-bugyo, or “dance magistracy,” was established to regulate the performance of court dances at state ceremonies.”

Women were not allowed to participate in dances until after the “Ryûkyû-shobun” of the Meiji era (1868-1912), when the Ryûkyû kingdom was integrated into the prefectural system of the new state of Japan. At that time, court dancers lost their jobs and started to perform plays in Naha city. This was referred to as “miscellaneous dances” as opposed to court dances. From the appearance of female dancers, the choreography became more fluid, softer. After the war, various modern dances, based on classical dances, appeared.

Thus Ebata-sensei explains the origins of Ryûkyû-buyô, from court dance to diverse dance and creative dance.

The performance of Ryûkyû-buyô by Ebata-sensei shows its difference from the Japanese dance. Soft fingers, slightly bent waist, the body changes direction by these specific movements. Gamaku-ire (putting gamaku) is a specificity of Ryûkyû-buyô.

When a sensei teaches, one often hears him say “gamaku-ire/put gamaku here. ” Gamaku usually refers to the soft part between the pelvis and the ribs. Exhale slightly while keeping energy in the right or left gamaku. With gamaku, the hip/waist area and the upper body posture connect, and the body moves with flexibility, allowing the physical specificity of Ryûkyû-buyô to be expressed.”

The attention put in the gamaku, ankles, knees, hips, shoulders is very important. When you walk, don’t just move your feet, but walk with gamaku, put it in your steps, your gait will become flexible. For example, in the pivot to the left of the classical dance “onna’odori”, put your right foot forward, turn your right ankle to the left, when you turn, you will naturally use gamaku, the pivot will be smooth and fluid. If you only use your feet to change the direction, the movement becomes completely different. So it is not the movement of Ryûkyû dance. “ 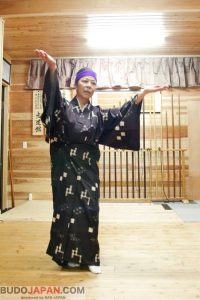 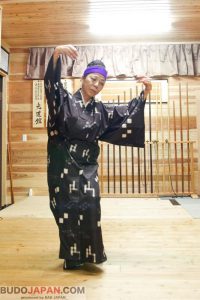 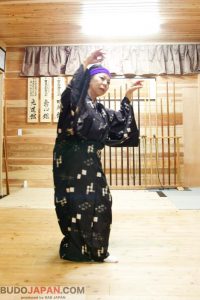 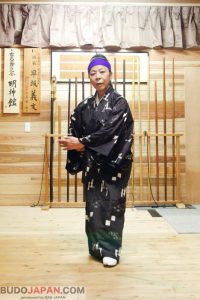 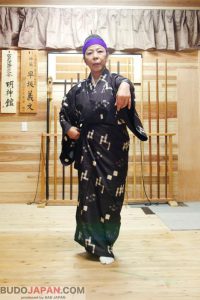 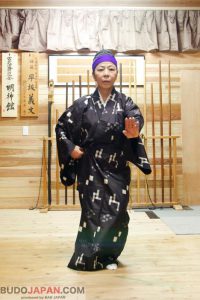 “Hamachidori” is one of the most representative dances among the various dances created after the abolition of the kingdom. In this dance, which contains many elements of classical women’s dance, one can see many foot movements using gamaku. ❶～❸By inserting the gamaku to the left, the upper body is stabilized while the direction is changed smoothly. ❹～❻In the fluidity of Ryûkyû-buyô, the steps, including gamaku, express the specificity of this technique.

Joining the gesture to the explanations, Ebata-sensei performs pivots with and without putting gamaku, indeed, the difference is immediately noticeable.

In general, we think that gamaku is concentrated in the area between the pelvis and the ribs, but the gamaku taught by Ebata-sensei ryû’s involves various parts of the body, such as the knees, the hips and the lower back. Thus, in the steps, the posterior gamaku, mobilizes the area from the hips to the lower back.

Research has shown that, depending on the sensei, their filiations, the awareness of placing the gamaku, is different. Some focus on the hip joint area and others on the area between the waist and the hips. This may be due to the gender of the dancers or to the evolution of times. Until the war, male dancers focused their awareness on the area around the hip joint to express their femininity, while female dancers emerged after the war and began to express feminine softness through movements around the waist.

In the Ufunshari section of Takahira Ryôsai’s dance, you have to coordinate the breathing. When you dance smoothly, small breaths stiffen your body. So it is important to breathe in for a long time, and place gamaku to rotate your hips in a smooth movement.

Exhaling, rotate your hips, taking a long breath during the steps. Ryûkyû-buyô requires a long and deep breath. All this is related to muchimi and represents Ryûkyû-buyô. It is a small movement, but it is surprisingly deep. “ 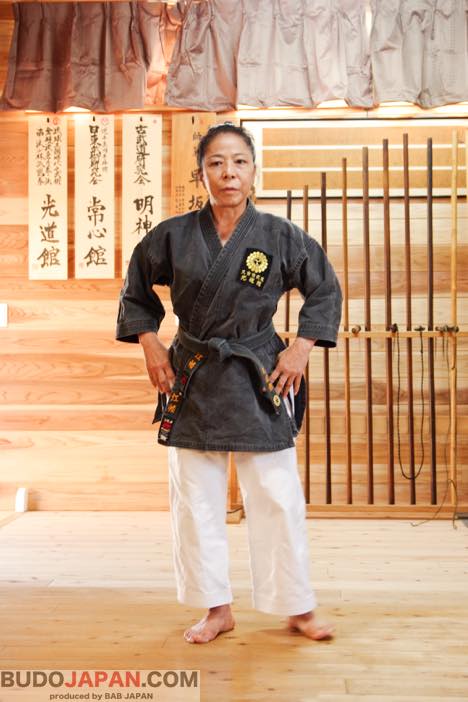 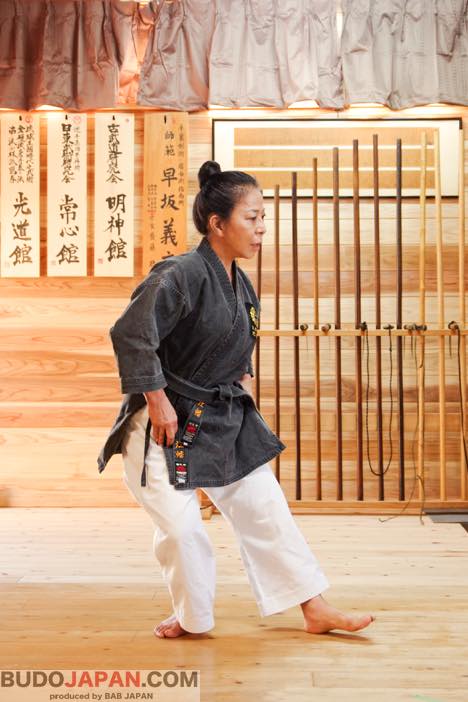 From a front position, bend your right knee and turning to the left, focus on placing the gamaku on the left, with the image of folding the ribs over the pelvis. 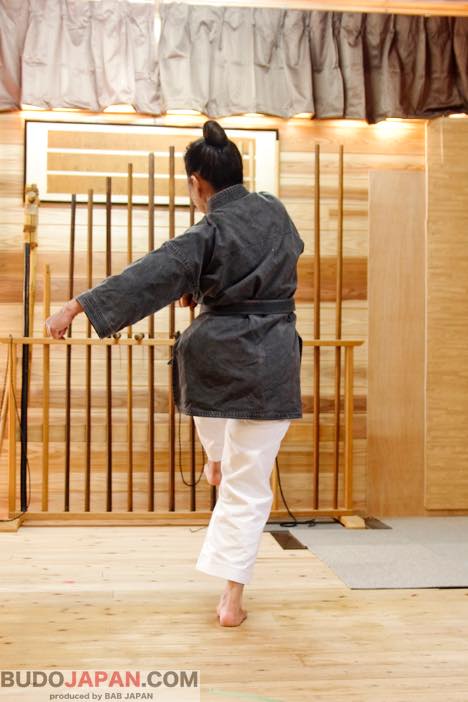 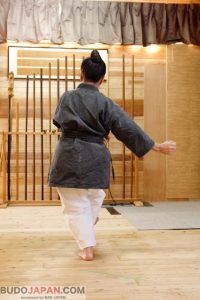 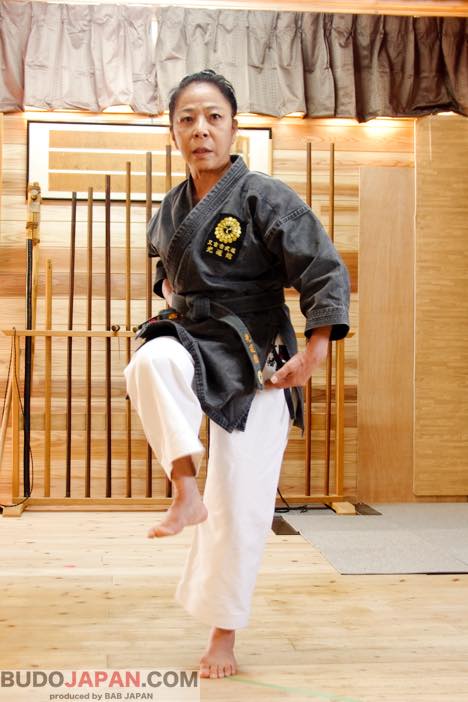 Posterior Gamaku
Implementation of gamaku in the area from the buttock to the waist, in a single leg posture.

The common secrets of dance and combat arts

In Ryûkyû-buyô, the use of gamaku is essential to express its specificity. And in Ryûkyû martial arts, it is an essential technique to create the power of tûdî, its fluidity and the precision of its techniques. 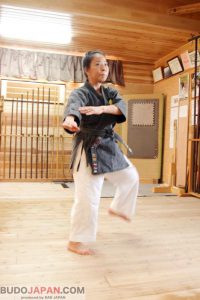 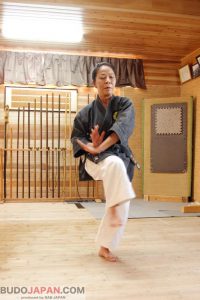 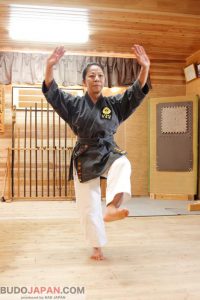 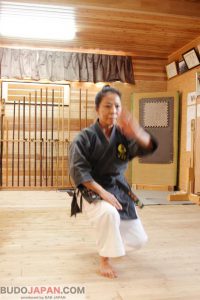 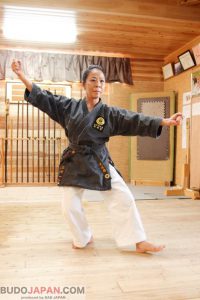 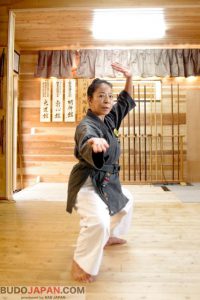 NISAI NU UDUI « Mae no hama »
Among the classical male dances performed by young men, especially the one called “Mae no hama”, many movements, incorporating gamaku and chinkuchi, recall those of tûdî.

In tûdî, the use of gamaku and chinkuchi are always essential. The use of gamaku mobilizes the basin over a small distance, but in a very powerful way, this power is transferred to the upper body to reach the arms and hands, adding to the chinkuchi. The result is a strong power in defense or attack. Chinkuchi is literally “power on a sun (~3cm)”, this technique emits great power in a small movement. 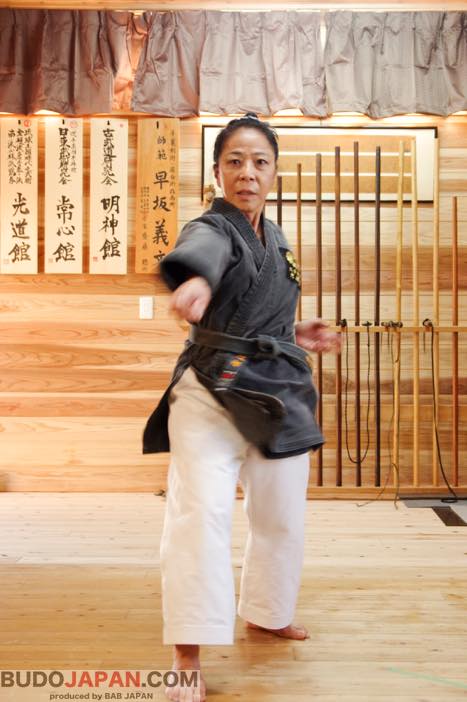 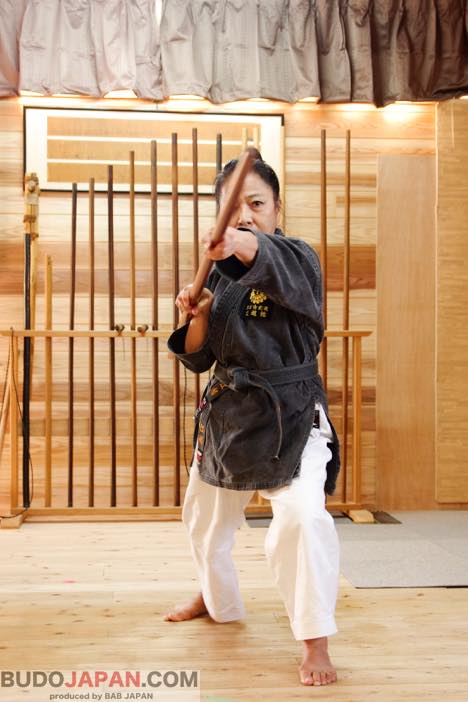 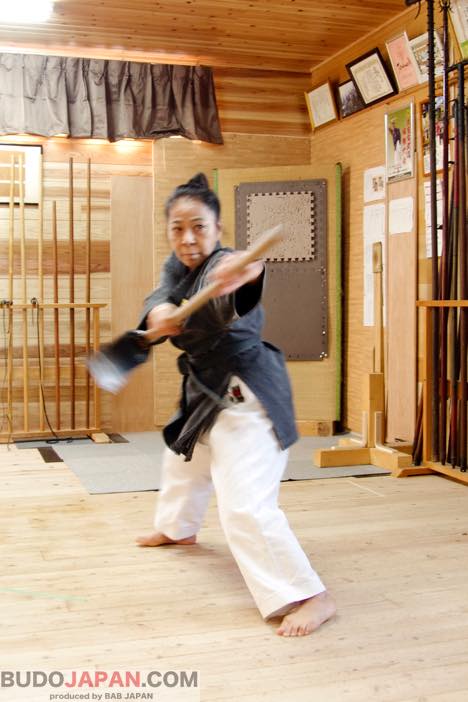 In the fighting arts of Ryûkyû (tûdî and kobujutsu), the use of gamaku creates power, agility and precision in the techniques.

During a gedan-uke, gamaku combined with the pelvis movement increases its liveliness, its speed and its heaviness on impact”,

Hayasaka shihan demonstrated, while joining the gesture to the word.

Similarly, muchimi, an important technique for expressing a supple movement in Ryûkyû-buyô, is used for koken and shôhô (a technique for deflecting and wrapping an attack) in tûdî. Even when using “palm” techniques, gamaku generated in the pelvis area can be fully transmitted to the upper limbs and annihilate a powerful tsuki. 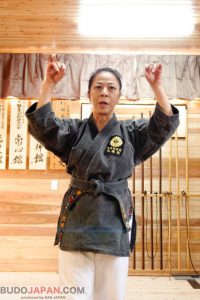 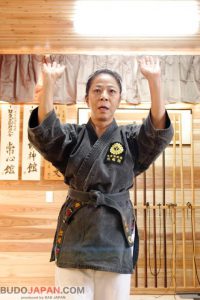 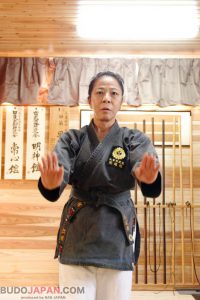 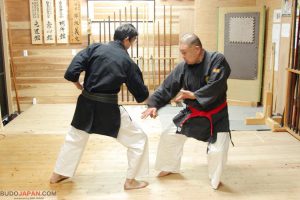 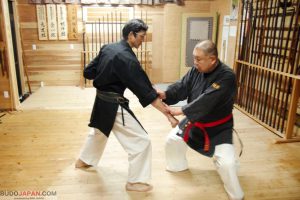 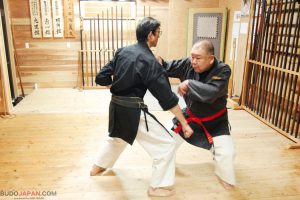 Hand/wrist and uke-waza/torite movements
❶～❸The hand and wrist techniques of Ryûkyû-buyô, such as rotation and pressure, contain the power generated by gamaku, chinkuchi and muchimi, also common to the techniques of the fighting arts.❹ Gedan-uke combining gamaku by Hayasaka-shihan. ❺ ❻ Soft parry with the palm and sharp strike with koken.

In tûdî, Gamaku is an important and hidden technique for the generation of power in both offensive and defensive techniques. While it was hidden in tûdî, art of combat, it was an indispensable technique in the Ryûkyû-buyô. 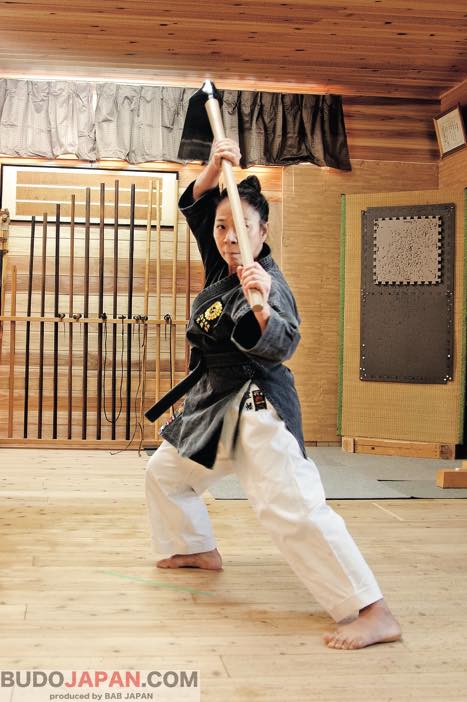