HOME >  Feature Articles >  【The Brush is the Sword of the Mind】Takeda Shingen: the Tiger of Kai

Many martial arts masters in the past have also been masters of the brush. The sword speaks to the brush, and the brush instructs the sword. With Mastery they become one. William Reed has a 10th-dan in Shodo and an 8th-dan in Aikido, and in this Series he looks at the human character behind the written character in Samurai Shodo. In the 8th article of this Series he paints and analyzes the brush writing of Takeda Shingen, the Warlord and Tiger of Kai, who ruled in the Sengoku Period of Civil Wars in Japan.

The greatly feared and admired rival of Uesugi Kenshin 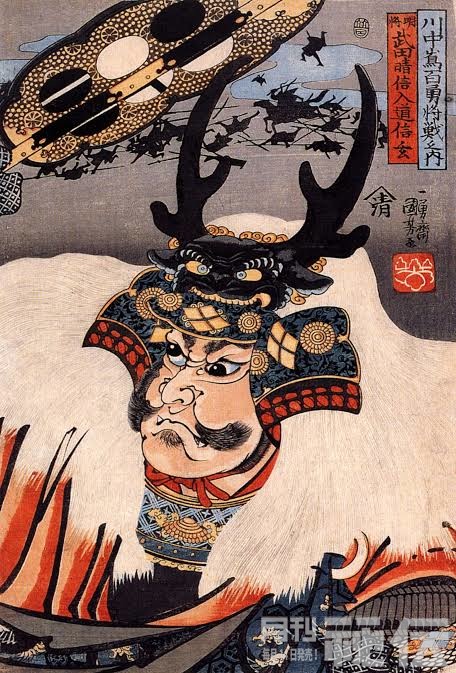 When Japanese hear about Takeda Shingen,what often comes to mind is the series of 5 battles that he fought with his rival Uesugi Kenshin at Kawanakajima. Shingen is the name that he assumed later in life when he became a Buddhist Priest, but we will refer to him as Shingen, the name by which he is best known. It is difficult to describe the achievements of Takeda Shingen in a few words, but he was born as the eldest son of Nobutora, only eventually to depose his own father banishing him from the Province of Kai. He fought against many of the famed generals of the Sengoku Period including Uesugi Kenshin, Suwa Yoshishige, Oda Nobunaga, Tokugawa Ieyasu, Imagawa Yoshimoto, and Hōjō Ujiyasu, in a struggle to unify the country under one leader, though Shingen died falling short of that mission.

This was not the only time that a father and son in the Takeda Clan fell on opposing sides in a struggle for succession. Shingen himself faced an attempt at usurping his power by his own eldest son, having him imprisoned with his son eventually taking his own life. Shingen’s Great Grandfather Takeda Nobumasa attempted to appoint his 2nd son as his successor, which led to 3 years of internal fighting and confusion over split loyalties among his vassals, with his son Nobutsuna eventually winning control. The Province of Kai was torn by internal conflicts. Taking advantage of this they were invaded by the Imagawa Clan from the neighboring Province of Suruga. The Takeda were further beset by attacks from the Hōjō Clan, by a massively damaging earthquake, and by the loss of 1st son Nobutsuna at the age of 36. At the time Nobutora was only 13 years old.

With seemingly unbearable troubles inside and outside the Province of Kai, how must this have been to bear by the young Nobutora. Although Nobutora is often portrayed as a reckless leader, you cannot help but feel some sympathy under the circumstances that he inherited. However, the fact that Shingen was able to banish his father Nobutora in a bloodless coup d’état seems to indicate that Shingen had many sympathizers in carrying this out. It is difficult for us living today in a time of peace to judge the right and wrong of this by our own standards of morality. Morever, it is known from correspondence between Shingen and Imagawa Yoshimoto, who was married to Shingen’s older sister, that Shingen saw to it that his father was taken in by his own brother-in-law in Suruga Imagawa, and that he also provided money and female attendants for his care in forced retirement.

Photo Caption: Around the time of the first Kawanakajima battles, Takeda Shingen sent this letter to one of his chief vassals. This letter was written by Shingen himself. In the second line from the left toward the end of the letter there is a phrase 毎事有氣遣 (nani goto ni mo kizukai wo suru), which means to exercise precaution in all things. Shingen’s brush writing reveals many aspects of his character, creativity, decisiveness, strong leadership, talent, as well as his proud and overbearing nature. These qualities in combination made him well-suited to the mission of a Samurai Warlord in that period, and testify to his great leadership.

Not only a warrior, but a wise and capable ruler

Although he spend many days and nights in battle, Takeda Shingen also carried out construction of many stone embankments in the basin between mountains where Kofu is located for waterworks and flood control. He proved a capable administrator of his domain. He also supported the activities of local craftsman in making handmade Washi paper, as well as lacquered works and other crafts. He gave free passage to tradesmen so that they could conduct commerce with neighboring territories, and in this way was able to acquire supplies of salt and fish.

Not only tradesman, but Buddhist and Shinto priests, Shugendō Fuji Mountain Priests, as well as spies and information gathers were able to take advantage of mobility and accessibility, by which Takeda Shingen kept well-informed and well-supplied. In this way he could remain in the Province of Kai, yet be well aware of what was happening in neighboring provinces, by which he earned the nickname the Long-Legged Priest. He was a staunch practitioner of Bunbu Ryōdō, the Mastery of Sword and Letters, and from a young age was an avid reader of Military Classics such as Sun Tzu’s Art of War, and the Four Books and Five Classics of Confucius, and he studied Waka and Chinese Poetry. From these studies he adopted the classic battle flag motto 風林火山 (Fūrin Kazan), Swift as the Wind, Still as the Forest, Invasive as Fire, and Immovable as the Mountain.

Reading into Takeda Shingen’s Spirit from a secret letter 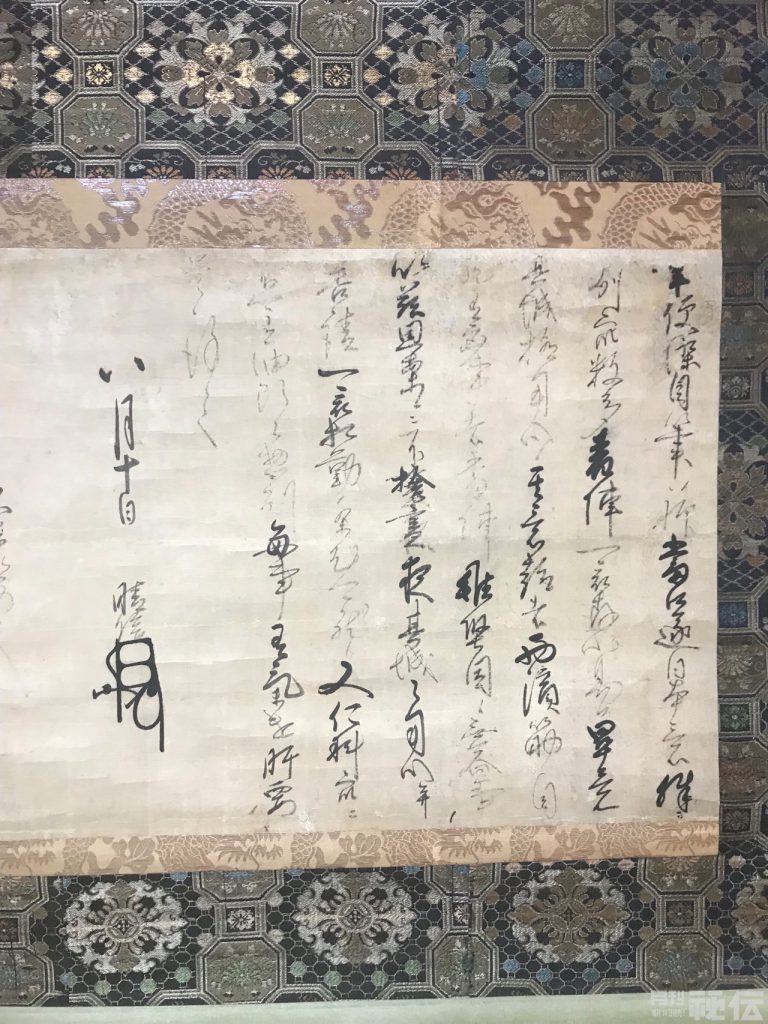 The photo shows a remarkable sample of brush writing by Takeda Shingen. This letter was written in the early days of the first campaign at Kawanakajima, and was a secret transmission addressed in his own hand to one of his chief vassals in the Western battalion defending the area in what is now known as Itoikawa City in Niigata Prefecture. The letter assures him that the campaign is proceeding according to plan, and that other battalions have gathered to reinforce their strength. It asks him to defend the castle with caution, to stay on guard against the group at Nishina, and to exercise precaution in all things. You can imagine how this letter must have emboldened the spirit of those defending the front line.

The first characteristic of Shingen’s handwriting is how little space is left between the characters. This reflects an ability to quickly come up with creative solutions without giving it extended thought. There are also signs of a decisive character, as well as a man impatient to take action. He was quick to decide and quick to act, not leaving much time in between for reflection. It must have been difficult for him to wait and consider things before taking action. From the time of his first battle at the age of 15, until he died at the age of 37, he engaged in the capture of over 50 castles. Even for the Sengoku Period this is an incredible number of military engagements. His impatience and constant action must have taken its toll on his health, as he is purported to have died of an illness while campaigning. This is a warning to anyone who writes in a similar style, with characters following so closely and no breathing space to recover.

Another characteristic of his handwriting is a tendency to write vertical strokes which extend well below the character. This is a sign of abundant energy, and is often found in strong leaders, reflecting a desire to go ahead and lead the way. Long and connected strokes are a sign of excellent concentration, and the ability to release power when it is needed. There are signs of empathy and the ability to perform theatrically, which must have been a key to gaining the loyalty of his own vassals. He was considered a master of getting the most from the people he led.

Strong stroke endings are a sign of responsibility and tenacity, a person who sees things through to the end. Long horizontal strokes which start some distance to the left of the character are a sign of an early starter, and are often found in people with exceptional abilities. Long horizontal strokes are indeed a characteristic of the handwriting of Shōtoku Taishi, an early ruler of Japan who composed the nation’s first constitution in 604. Despite his high level of skill in Calligraphy, some of the characters in Shingen’s writing are difficult to decipher, which is a sign of his overbearing insistence on having things his own way. Then again, this may have been a critical ingredient of survival in the time he lived, with constant rivalry among local warlords. 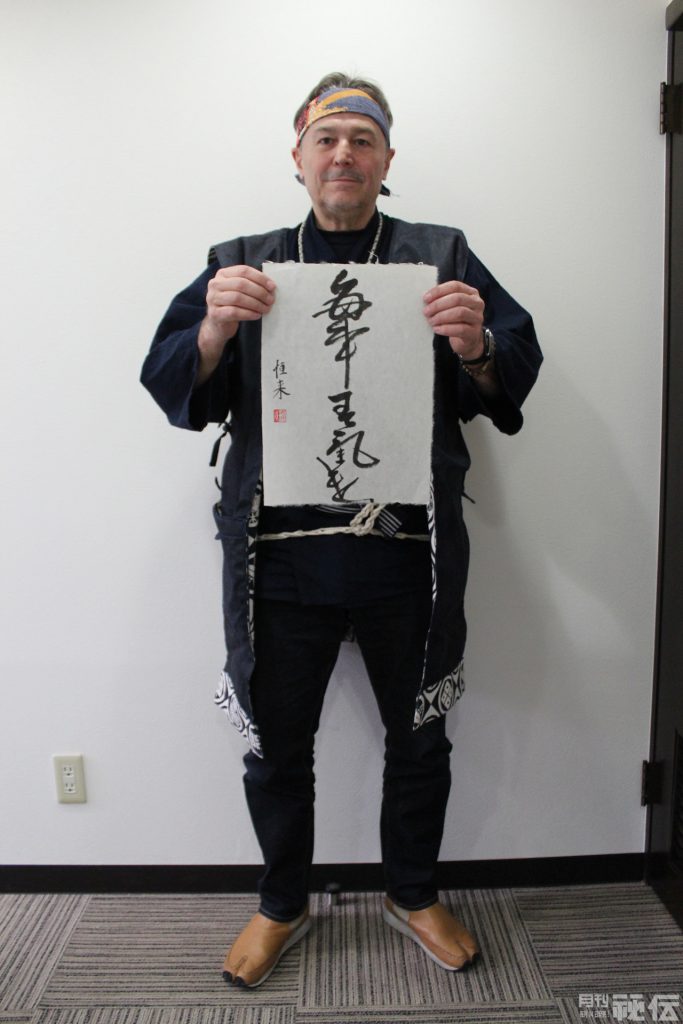 William Reed
is from the USA, but is a long-time resident of Japan. Currently a professor at Yamanashi Gakuin University, in the International College of Liberal Arts (iCLA), where he is also a Co-Director of Japan Studies. As a Calligrapher, he holds a 10th-dan in Shodo and is vice-chairman of the Nihon Kyoiku Shodo Renmei, and is also a Certified Graphology Adviser from the Japan Graphologist Association. As a Martial Artist, he holds an 8th-dan in Aikido from the Aikido Yuishinkai. He holds a Tokubetsu Shihan rank in Nanba, the Art of Physical Finesse. A weekly television commentator for Yamanashi Broadcasting, he also has appeared numerous times on NHK World Journeys in Japan, and in documentaries as a navigator on traditional Japanese history and culture. He has appeared twice on TEDx Stages in Japan and Norway, and has written a bestseller in Japanese on World Class Speaking. For other articles in the Series, visit http://www.samurai-walk.com/samurai-shodo