HOME > Feature Articles > September 10th is Kyudo no Hi. What is kyudo?

Hi everyone this is Budojapan.com Ambassador Jessica. Have you heard of Kyudo Day before?

In today’s article I’ll briefly introduce you to the Japanese martial art of archery: kyudo and a special day that kyudo practitioners celebrate in Japan. 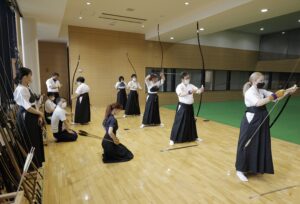 In Japanese Kyu means bow and do means way, and as such, kyudo comes to mean the way of the bow. A kyudo archer completes the 8 kata or hassetsu/movements before during and after releasing the arrow into a 36cm target 28m away.

The movements and look of kyudo itself may seen deceptively simple, however correct use of the body with specific techniques like tenouchi and correct use of tanden in the lower abdomen take many years to perfect.

“Kyudo is a traditional discipline that uses the Japanese bow called a yumi for both recreation and sport as well as the training of body and mind.” 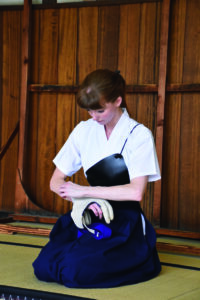 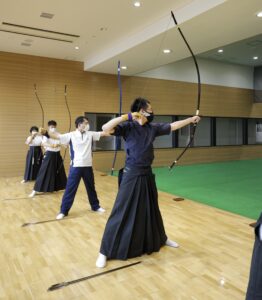 The bow is an asymmetric longbow with the grip one third of the way down. Kyudo archers wear a yugake or kyudo glove on their right hand with a hardened thumb necessary to draw the bow string.

Modern day kyudo was established in 1948 under the All Nippon Kyudo Federation (ANKF). The registered kyudo population in Japan is approximately 123,952 people [１] and there are over 1,200 dojos in Japan. [２]. A large amount of practitioners are actually students in middle, high schools, and University. 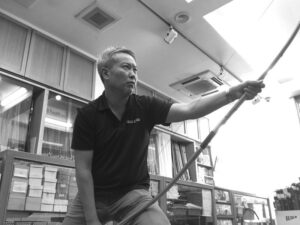 One part of getting others involved and interested in Budo like kyudo is raising awareness. Some people simply don’t realise kyudo exists. This was one of the reasons that Hideki Ikai, the owner of Ikai Kyudo Shop decided to create a day called Kyudo Day. He wanted to raise awareness of kyudo via SNS with hashtags and a kind of online celebration for all practitioners too.

Founded in 2015, Kyudo no Hi (弓道の日 in Japanese) is on September 10th. In Japanese the number nine (for September) is pronounced as ‘ku’ or ‘kyu’ and the number ten can be pronounced as ‘to’ or in this case ‘do’. When you put 9 and 10  together it becomes kyudo!

On Kyudo Day a large focus is on social media related kyudo posts with the use of the hashtag #弓道の日 and #9月10日 the purpose of which is to get the hashtag to trend, especially on twitter, the most popular social media platform in Japan after youtube.

The hope is that if all practitioners can post or talk about kyudo for at least one day of the year, there is a chance non practitioners will see the photos and videos and words and in turn become interested and want to start kyudo too.

Non practitioners are welcome to join the online festivities on September 10th by tweeting or posting their thoughts on social media or by sharing others kyudo related posts. You too are welcome to copy the hashtags from this online article and search on your preferred social media to discover the world of kyudo!

Thanks very much for reading and I hope to talk to you soon!

Founder of Kyudo Day and Owner of Ikai Kyudo Shop