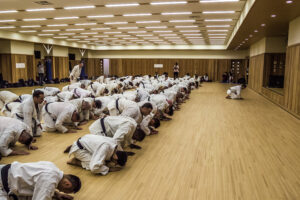 One of the most important things in Martial Arts is the Bow as you need to show Respect, especially when you enter the Dojo or when you encounter others before you begin. Always Bow to your Sensei!

The word “Rei” comes from the Japanese word ” Reigi”, which means “Respect, Courtesy, Manners. A Bow should not be a Nod but a deep bow when you enter the Dojo and when you leave the Dojo. (often we say “onegaishimasu” at the same time too.) Without Respect you can’t get Respect.

Karate begins and ends with the bow. That’s why we Bow to the Dojo itself, as well as the people in it! 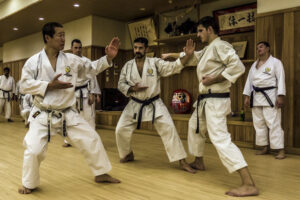 “Sen” which means “before”

Real Meaning: The one who has come before in Life.

So, a “Sensei” is someone who is ahead of you in Lifes journey. That’s why a Sensei isn’t just a person who instructs Martial Arts techniques.

Your Sensei is your mentor, your Life coach based on their knowledge thus far. “The way of Karate is the Way of Life.”

Your Sensei has walked the path before You and is there to help your growth and guide you on your journey if, you are ready to follow. 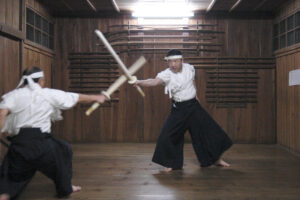 The ” Dojo” is the place you are guided and embark on a Journey on the way, by someone who has “come before” (= “Sensei”)

No matter where you teach or Learn Martial Arts, that Place is your “Dojo”.

Many instructors teach Martial Arts in Community centers, dance studios, gyms or private studios. That becomes the “Dojo” and is deeper in meaning than most people think. 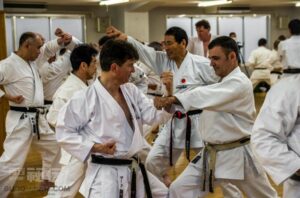 The word “uke” comes from the Japanese word “ukeru”, which means “to receive”
But in the West, it has been interpreted as “to block”
for me, that’s the opposite of receiving!

if you change your mindset from “blocking” to “receiving”, your entire perception of how to apply Karate against a bigger or stronger opponent will change. You rely more on technique, and less on brute force.

* This is something that is taught in Japan 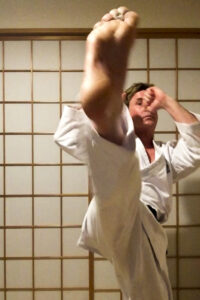 Of course, this isn’t a problem when you write in Japanese, because it’s written with a different Sino-Japanese ideogram (known as “Kanji”.)

But, if you can’t write in Japanese Kanji, You should make sure to learn the difference between “Keri” and “Geri”