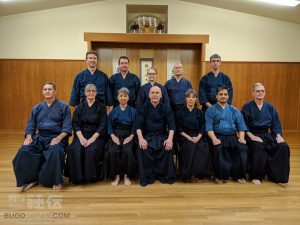 I feel particularly honored to present in this 10th part of the Worldwide Koryu Dojo Report one of the living legends of koryu in the West. It is Phil Relnick sensei from Seattle who has been practicing Shinto Muso-ryu and Tenshinsho-den Katori Shinto-ryu since the 1960s having lived in Japan for over 40 years, 20 of them as the closest friend of the great researcher of Japanese martial arts, Donn F. Draeger. 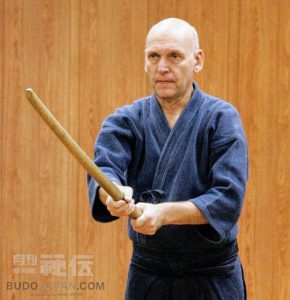 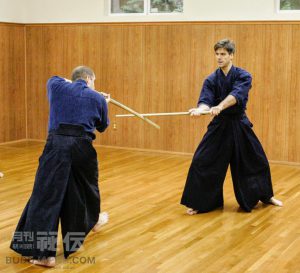 In March 1962, a close friend and senior to me in judo, Donn Draeger, a well-known martial arts practitioner around the world, introduced me to Shimizu Takaji sensei, shihan of SMR and I was accepted, becoming one of his first foreign students. In May 1978, Draeger introduced me to Otake Risuke sensei, the shihan of KSR and I was also accepted as one of his first foreign students. Each time, watching the training, it was “love at first sight,” even after so many years of training and teaching.

There are very few classical martial arts organizations or independent dojos in the US. Regarding SMR and KSR, as far as I know, my dojo is the only formally organized headquarters dojo of these two arts in our country. However, there are a very small number of dojos around our country, authorized or not, that teach SMR or KSR techniques. How correctly they are taught is questionable.

Considering the size of the US compared to Japan, there are very few authorized SMR and KSR dojos or “study groups” to consider them widespread. I have the same opinion regarding other classical martial arts practice in the US. 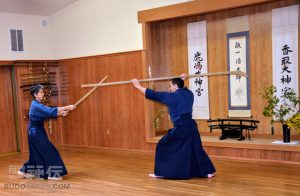 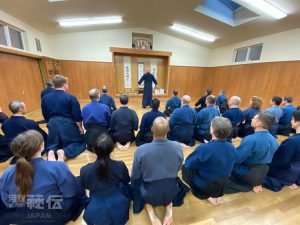 We make every effort to make yearly visits to Japan with students who are able to go. After being a resident in Japan for 40 years (1956-1998), I have come to understand that if a foreign martial arts instructor teaches Japanese martial arts in his own country it is very important to either periodically visit his teacher in Japan with his students, or periodically invite his teacher to his country to make sure that he is teaching correctly. Regrettably, this is seldom what happens because of time, cost and other responsibilities, or just not knowing or understanding the importance of correctly teaching the art. 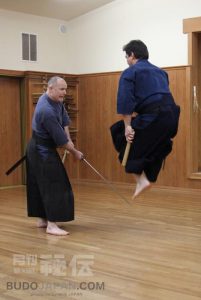 Cultural differences between not only America and Japan, but also between modern and pre-modern Japan are often overlooked or just not known to the teachers or students.

Because of my long residence in Japan, I have been able to create a blend of both our cultures without changing the technical aspects of training, which, so far, has been successful. I have taught our students simple Japanese sentences, certain polite mannerisms, humility, the correct way to wear a keikogi, proper care of the weapons, etc. A number of my students study the Japanese language and are increasing their proficiency daily. 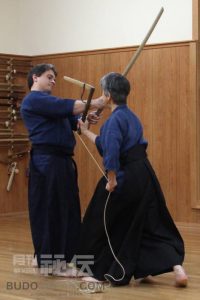 Using my experience in judo as an example, I consider it a quasi-sport. For me it was primarily about winning contests and getting promoted. The teacher shows you the basic movements of a technique. It is then your responsibility to adjust the technique to suit your body type by copying from someone else who is successful in practice or competition. When I got older and started competing against younger competitors, I got the message. Time to move on.

In the classical martial arts, you have only one teacher. They are responsible for passing on the traditions of the school. There is only kata, not free training or competition, making it possible to continue this type of training throughout your life.

The strongest characteristic of both arts is survival in conflict. This is practiced in our kata, which are very active and based on actual fighting using weapons. The term active means continuous total body movement while doing the kata. Slower movements for beginners at first, and increasing in speed and accuracy as they improve. We must have a clear understanding of knowing our target, the correct distance to reach the target, and the correct timing of each movement. We are taught to depend on skill and not brute strength. Through constant repetition, we are able to build a strong, healthy body, and learn how to use the weapon safely and effectively.

I don’t think there are many obvious benefits, but there are some which most people don’t notice. Training in the classical arts have given me more self-confidence in life, a sense of awareness, and taught me the use of various weapons, including a stick, empty hand tactics, etc., which may prove valuable in an emergency. It has also given me an understanding of pre-modern Japanese culture, in which I have a strong interest. 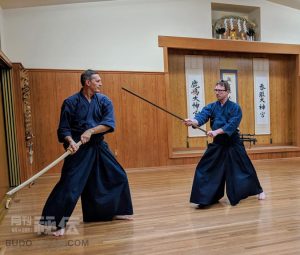 Yes, I live in the suburbs of Seattle, Washington. Historically, the first Japanese to settle in our country came to Seattle, where there is still a large Japanese community. Both SMR and KSR perform demonstrations in Seattle’s annual Japanese Cherry Blossom Festival. I am a graduate of Waseda University, and the graduates who now work or live here permanently use the dojo for yearly Waseda Alumni meetings (稲門会). My wife is Japanese and is an active member and teacher in a Sogetsu (草月) Ikebana organization in Seattle, so I am able to connect with many of their Japanese members. 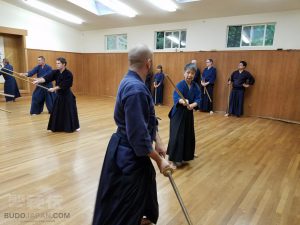