HOME >  Feature Articles >  The Brush is the Sword of the Mind

Saigo Takamori is known in the popular imagination as the Last Samurai. Although the movie by that name is roughly based on the life of Saigo Takamori, it is a work of historical fiction. The character played by Tom Cruise is Captain Nathan Algren, a fictional character who was based on Jules Brunet, a French military advisor who fought in the Boshin War on the losing Shogunate side. Ken Watanabe played Lord Moritsugu Katsumoto, a fictional character based on Saigo Takamori. And the filming took place in New Zealand! A highly successful film at the Box Office, it plays freely with fact and fiction, and indirectly presents one image of Saigo Takamori.

This is not the first time that Saigo Takamori has been fictionalized in the public image. Even during his life he was cast in an image to carry a cause, becoming what Professor Aoyama Tadamasa of Bukkyo University called, the Perfect Omikoshi, or portable shrine. Though villainized by the Meiji Government in the Seinan War, he was soon recast as a hero representing the essence of what it means to be Japanese. He was presented in Nishiki-e prints in various ways that took liberties with historical facts. We don’t even know what he really looked like, as no real photographs of Saigo Takamori exist, and even his wife said at the unveiling of the famous Saigo Takamori statue in Ueno Park, “That is not my husband!”

He was cast and quoted as a model of behavior during the Pacific War to justify the sacrifices demanded of the Japanese people; and he was recast as a model of selfless dedication to public benefit under Democracy. Princeton University historian Charles L. Yates wrote a book, Saigo Takamori: The Man Behind the Myth, to help separate some of these images from what we know of Saigo Takamori’s life. The Image of the Dai Saigo, Great Saigo continued to emerge in biographies, and in the 1975-76 novel by Shiba Ryotaro, Tobu ga Gotoku (Like Flying!), on which was based the 1990 NHK Taiga Drama by the same name. And now in 2018 Saigo Takamori emerges again in the Taiga Drama Sego Don!

You can read history and historical novels, watch documentaries and Taiga Drama, and even movies like the Last Samurai, which are pieces to the puzzle. They can be interesting, entertaining, informative, and sometimes misleading, depending on the point of view, who is telling the story, and who is portraying the character of Saigo Takamori.

Reading the Words of Saigo Takamori

There is another way of coming to know the man, and that is through the words and brushstrokes that he actually wrote. Calligraphy is like a silent recording of the author’s voice, but it is only silent to those who look at the surface. In this article we will look at three ways to go below the surface in the writing, and encounter Saigo Takamori at a deeper level.

The challenge is that Samurai writing is often done in highly cursive (Sousho) brush strokes, as well as in archaic literary style, Sourou-bun for formal documents, or Kanbun for Chinese poetry. Reading the original is in the realm of the scholar, but fortunately there are scholars who convert the characters into more legible print, as well as providing translations and interpretations in modern language. The context of the writing is also important. Who was it written for, and for what purpose, and in what context? This interpretation makes it more accessible, but still only represents the first layer of intellectual understanding.

Reading the Character of Saigo Takamori

The next layer is to look into the character and psychology of the person, by examining certain features of the brush writing which reveal the character in the way that the strokes are written. This is known as Graphology, or handwriting analysis, and provides insights into the character behind the characters. In Japan, this has been studied deeply by the Japan Graphologists Association. An analysis of specific qualities of Saigo Takamori’s brush writing appears in the illustrations, which was provided under the supervision of Ishizaki Senu Sensei, an experienced and Certified Graphologist, as well as my Calligraphy teacher.

In Saigo Takamori’s brush writing we see many features that reflect what we might expect from what we know of the man in history. The closely guarded internal spaces between the radicals of the character reveals a man who was determined and dedicated to a cause, stubborn and not easily distracted from his higher purpose. We also see signs of his struggle in the collapsed spaces where strokes cross that were meant to be open. The strength of his initial strokes reveals a strong-willed man of purpose. The equal spacing of horizontal strokes, and the even spaces between characters reveals a man who can wait, and will not be hurried. His preference for a cursive style and continuous connection of strokes reveals the hand of a confident, concentrated man who was conservative and traditional in his values.

Interestingly, some characteristics of his handwriting vary depending on the circumstance, and to whom he was writing. His poem Reflections during Imprisonment (Gokuchu Kan ari), written when he was in exile on Okino Erabu Island, shows deep concentration without any deviation from the vertical line. This is consistent with the content of the writing, and the tone of Chinese style poetry drawing on Neo-Confucian philosophy applied to the reverence that anti-Shogunal Samurai felt toward the Emperor. Yet the vertical line of his writing tends to weave and even drift to the left in his letters to Okubo Toshimichi, attempting to persuade a friend who did not share his views.

Like other men of High Purpose who composed Chinese style poetry and lived by aphorisms, he was determined and intelligent, but not original. He lived in the Shadow of his Lord Shimazu Nariakira, who he revered so much that he considered following him in death. He cared for the common people, having observed the suffering and unequal treatment of farmers in his own domain as a young man. He lived to serve, which is the actual meaning of the word Samurai, and sought to achieve a purification of politics during the Meiji Restoration, only to turn his back on it when it did not live up to his Higher Purpose. He took strategic risks with equanimity, rationalizing that if he died in the process, it would have been for the Higher Purpose. He was able to endure punishment and exile, not in resignation, but in determination to discover and life by Principles.

Katsu Kaishu described him as a man who would respond like a drum, in accordance to how he was stricken. Most of these characteristics are consistent with the image of what we might expect from what we know of the man, and it is interesting to see them revealed in his own handwriting.

Reading the Mind of Saigo Takamori

But we can read further into the body and soul behind his writing, if we learn how to faithfully copy the strokes, with a mental or physical brush. To do this itself requires tremendous concentration, close observation, and a willingness to give up our own preconceptions and graphological bias. This means not only reading, but actually writing the strokes in the same rhythm, style, and breathing of Saigo Takamori. It requires practice and some technique, but it can lead you to the marvelous experience of transcending space and time, as if you were listening to the man’s own voice through his writing. This is a humbling experience, and it can also help you discover the nuances of his personality, the subtle qualities which are often overlooked in scholarship and dramatic productions.

If you engage in this practice, that of faithfully copying Samurai Shodo with a brush, you will find that it enhances your ability to read and understand the man in the first two layers of reading his words and his character. From a young age the Satsuma Samurai were trained to develop courage and commitment in action. They studied Jigenryu Swordsmanship, as well as Neo-Confucian Classics and Calligraphy in their Samurai Schools (Shugo).No one can become Saigo Takamori, nor would you want to. However, anyone can benefit in this way by having a closer encounter with the man through his writing. By experiencing his brush strokes as he wrote them, you may even discover qualities of his character that can strengthen your own. 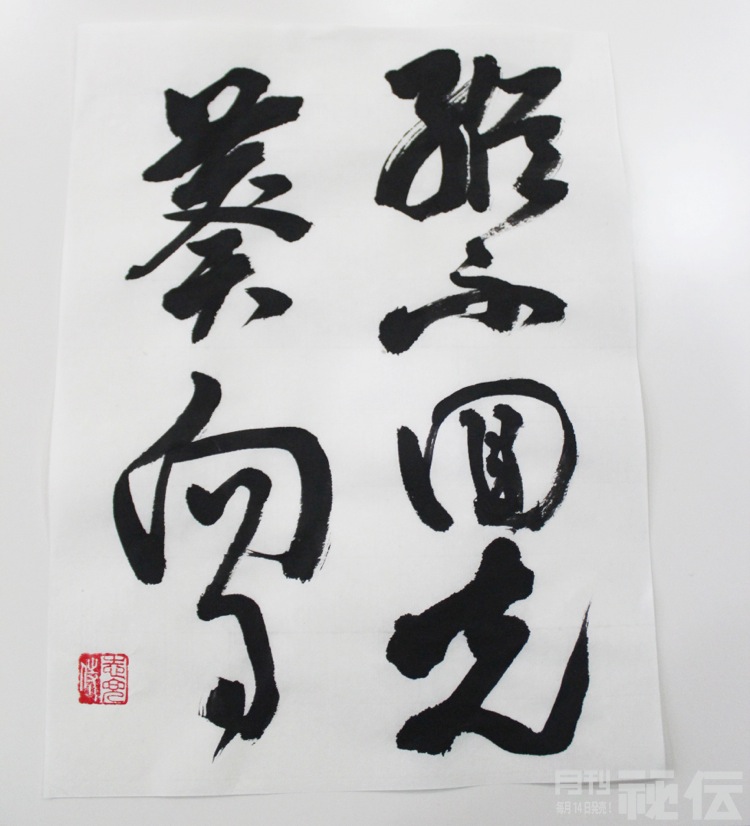 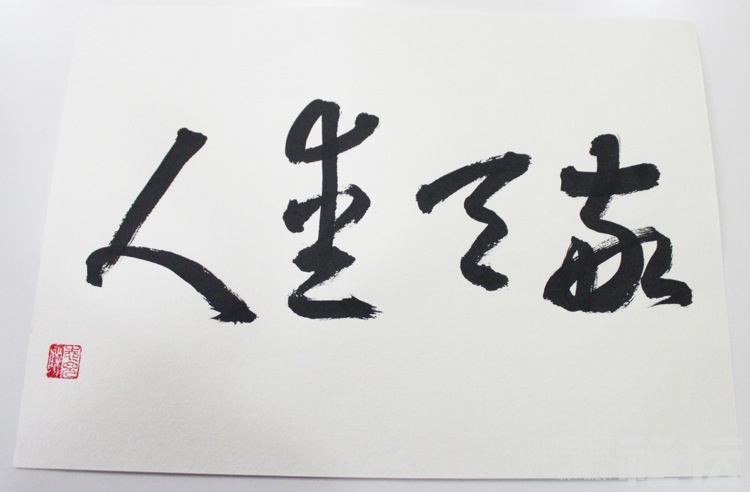 There are some features of Saigo Takamori’s handwriting that you might want to adopt in your own.

The brush grips the paper with a firm pressure, and executes the strokes boldly.

The vertical center line of each character is aligned above and below, and does not stray from the central axis.

This is best cultivated by writing in Gyousho or Sousho, which you can practice by copying single characters or phrases, while reflecting on their meaning. 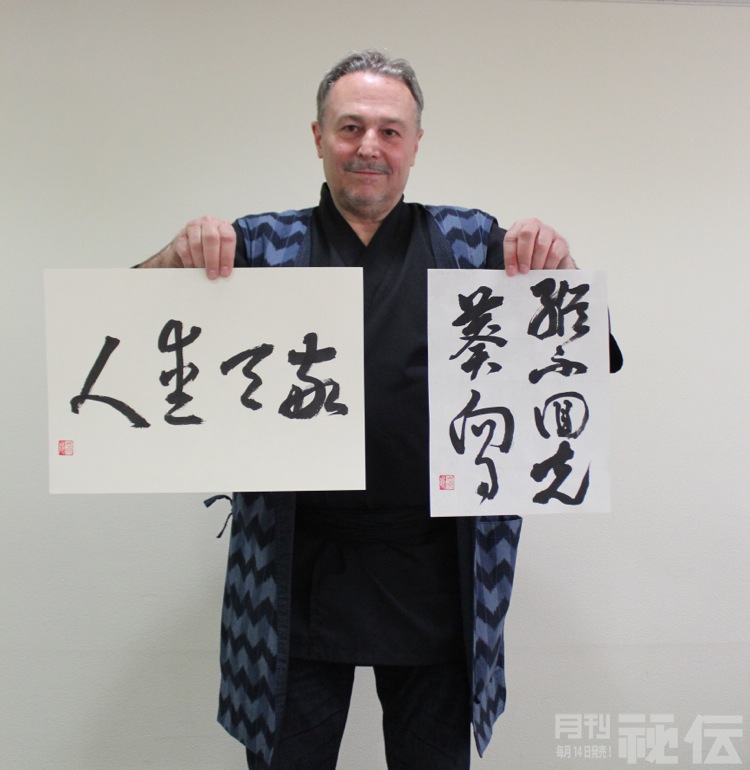 William Reed is an American but a long-time resident of Japan. Currently a professor at Yamanashi Gakuin University, International College of Liberal Arts (iCLA), and Co-Director of Japan Studies. He holds a 10th-dan in Shodo from the Nihon Kyoiku Shodo Renmei, and a 7th-dan in Aikido from the Yuishinkai, and is a Shihan in Nanba Jutsu. A weekly television commentator for Yamanashi Broadcasting, he also has appeared numerous times on NHK World Journeys in Japan, and in documentaries as a navigator to traditional Japanese history and culture. Certified as a World Class Speaking Coach, he has also appeared twice on TEDx stages in Japan and Norway, and has written a bestseller in Japanese on World Class Speaking.