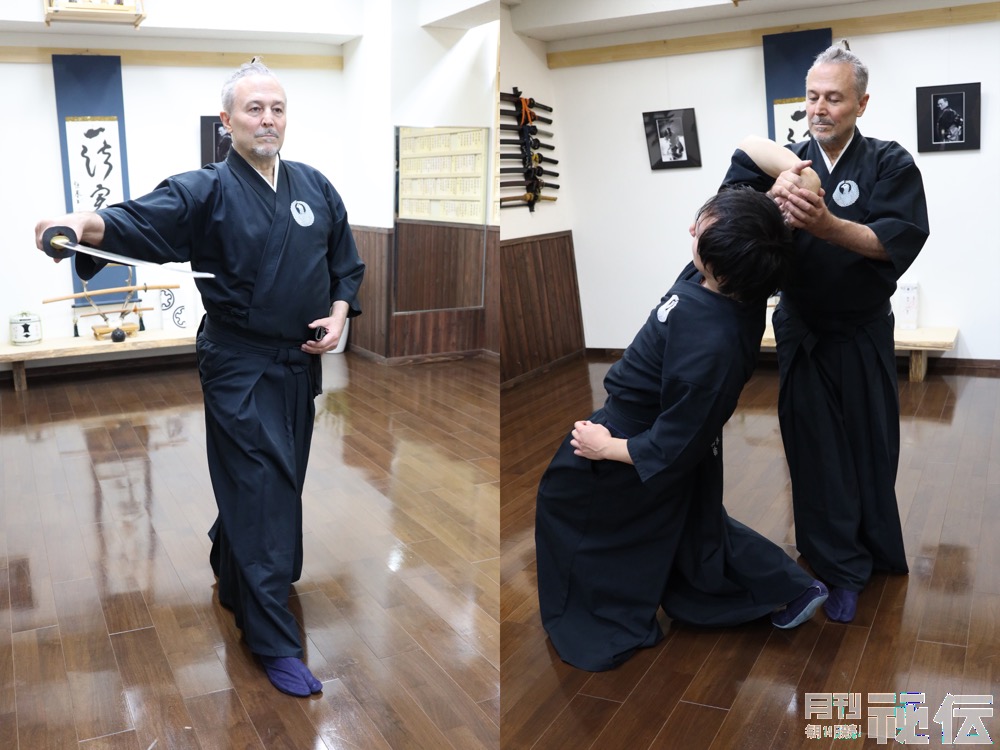 Aikido principles have much in common with principles of the Sword, and by training with Iaido including practice with a real sword, this can deepen your understanding of Aikido. William Reed holds a 10th-dan in Shodo, an 8th-dan in Aikido, and 2nd-dan in Iaido. He is Director of the International Committee for International Iaido Organization Hogyokukai, Director of Yamanashi Prefecture Hogyokukai, Vice Chairman of Japan Calligraphy Education Association, and a Professor of Japanese Culture at Yamanashi Gakuin University International College of Liberal Arts (iCLA).

Many Aikido practitioners agree that Aikido is based in some way on Sword movements and practice. Takeda Tokimune, the first born son and successor to Daitoryu Aikijujutsu Founder Takeda Sokaku said that, “Daitoryu is Sword movements performed without a sword.” Considering that a grounding in knowledge of sword movements is essential to understanding Aikido, many practitioners of Aikido engage in practice swings with a bokken, or wooden sword as part of their practice. As a long time practitioner of Aikido with an 8th-dan from the Aikido Yuishinkai, William Reed also trained with a Bokken for many years. Master Takeda Hogyoku, President of the International Iaido Organization Hogyokukai, appointed William Reed as Director of its International Committee and of Yamanashi Prefecture Hogyokukai. In recent years of studying Mugairyu Iaido with Master Takeda, he discovered many new things which enhanced his understanding of Aikido.

“Not only is the weight and balance of a Shinken different from a Bokken, the biggest difference is in the sharpness and clarity of the cutting edge. Your focus and practice has much more precision with a sharp blade compared to that with a blunt edge.”

Indeed one of Aikido Founder Ueshiba Morihei’s direct students Nishio Shoji dedicated himself to integrating Iaido into Aikido practice saying that, “You cannot understand the essence of Aikido practicing with a Bokken. You need to train with a real sword.”

Today Iaido is one Budo that practices with a real sword, and in particular with the Mugairyu Hogyokukai where Reed studies, there are three pillars of practice: Kata, Kumitachi, and Tameshigiri, which combine to include all of the essential practical elements of sword training.

Kesagiri can Transform your Yokomenuchi

Reed explains that the one Aikido technique which was particularly transformed by Iaido practice was applying the precision and energy of a Kesagiri sword cut to a strike with Yokomenuchi.

“The problem with the Yokomenuchi strike of most beginning Aikido students is that it doesn’t cut deep enough and it lacks the energy to cut through, even if it reaches the opponent. One reason is that energy and focus is not directed beyond the fingertips. It is completely different if you execute a Yokomenuchi strike deeply, in the same way that you do a Kesagiri sword cut. The fingertips should be facing the opponent at the end of the strike, much as the tip of the sword (kissaki) points to the opponent in Iaido. If you strike with energy in this way it is almost impossible to resist it in any way.”

Reed teaches Aikido to college students from around the world at Yamanashi Gakuin University’s International College of Liberal Arts (iCLA). After introducing Iaido sword movements to his students, there was a marked improvement in their Yokomenuchi Aikido strikes compared to before. Learning to make clean and precise cuts with the sword resulted in improved quality of their Aikido practice.

Points in Common with Yokomenuchi and Kesagiri 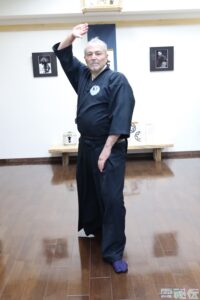 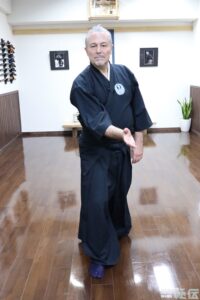 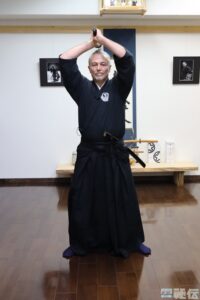 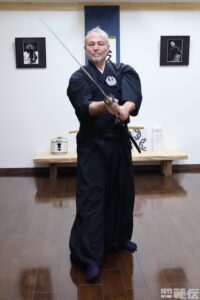 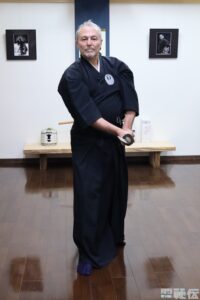 The Yokomenuchi strike in Aikido (1~3) is almost the same as the Kesagiri sword cut in Iaido (4~6). It is important to cut deeply and precisely with the katana sword as well as the tegatana sword hand. At the end of the cut, in both cases you point the tip of the sword (kissaki) or fingertips (yubisaki) at your opponent’s center line.

Striking Yokomenuchi in the same style as Kesagiri 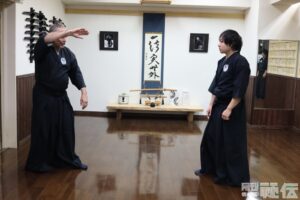 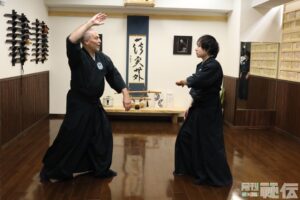 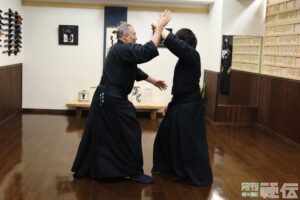 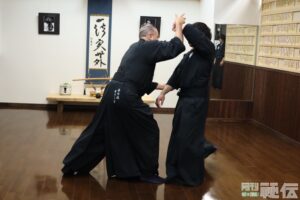 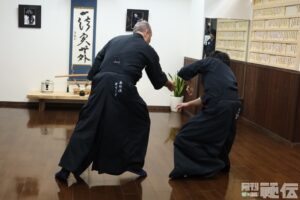 When executing Yokomenuchi with the same feeling learned from Kesagiri, you have enough power to cut through and throw an opponent who tries to resist it. A problem that many beginners have in Aikido is a Yokomenuchi that may not even reach the opponent, and completely lacks power even when it does. This can be dramatically improved by regular practice with a sword. 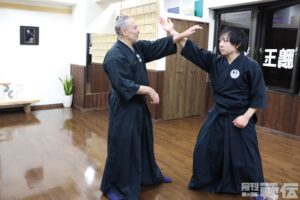 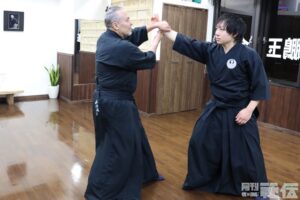 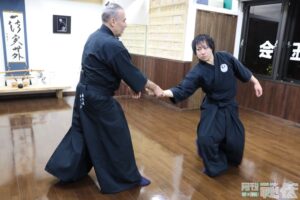 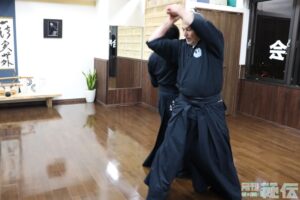 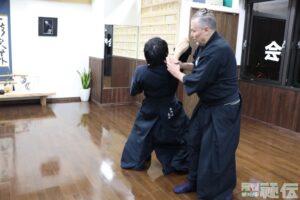 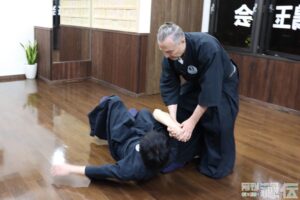 First you invite and receive your opponent’s Yokomenuchi strike with your left hand (1). At this moment you change the vector of your opponent’s diagonal down strike to an upward angle by subtly stretching the skin without blocking. This renders his striking force ineffective to the point where it is even possible to hold him off with one finger. With the vector now redirected, you take hold of his wrist with your right hand and unbalance him, while stepping back and sliding your foot back to maintain ma-ai (2~3). To execute Shihonage you step in and turn, folding his arm at the elbow with his hand to his shoulder and drop his body down (4~6).

In Aikido the solution is found in the correct performance of Yokomenuchi Shihonage. The irresistible force is the spear (hoko) or unstoppable Yokomenuchi strike. This is met by redirecting it’s vector, which is the Aikido equivalent of the shield or immovable object (tate), thereby resolving the paradox (mujun) by redirecting and leading it, an elegant solution to the conflict. Without a strong attack there is nothing to practice with. This is why training in Iaido can help improve your technique in Aikido.

Drawing on what he had learned in years of Aikido training, Reed created an original technique he calls Senkotsu Suburi to help students develop their center. Stand with feet apart and knees bent as if riding on horseback. Practice large Suburi cuts with a sword, bokken, or wooden pole, making a large arc with the tip of the sword touching your Sacrum and cutting down straight overhead through the center line (seichusen)and stopping parallel to the floor. It is best to practice with a sword, but if you can visualize the sharp cutting edge clearly, you can also benefit from practice with a bokken or wooden pole. It is important to tap the sacrum with the tip of the back of the sword or pole behind your back, as this helps awaken the vital energy in the Sacrum.

Reed explains, “The way to test whether you are doing it correctly or not is to have a partner push on your shoulder from the side after you have completed the cut. If the cut was done correctly, you should easily remain stable though your partner pushes strongly with both hands. If you are centered, you can even raise the foot closest to your partner off the ground and stand on one leg, even as he pushes. In this posture you could even enjoy a cup of Sake and laugh without being disturbed.”

Even though Reed is actually standing on one leg, he says he feels as though he is standing on three legs, his own one leg and the two legs of his partner. Instead of resisting the push at the shoulder, he sends the energy down to the ground like a lightning rod, so he remains perfectly stable. He says that, “The Sacrum or Senkotsu is the most important bone we have, which why it is called Sacred. If your Sacrum is filled with Vital Energy you can send it out in eight directions. I teach this to my students, and it results in a dramatic improvement in their Aikido.”

Iaido and Aikido are Superbly Compatible

The ideas presented here are the result of the discoveries that Reed has made in studying Iaido alongside Aikido. Each of these arts have their own traditions and styles, so it is not intended to be a denial of either. Though he has studied Aikido for 50 years, he is still only in his second year of Iaido, and as a Nidan is humbled at how much there is yet to learn. Nevertheless, he has found Iaido and Aikido to be superbly compatible, and recommends each to the other. He says however that, “Although cross training in sports can sometimes have detrimental effects, with Iaido and Aikido in technique and feeling I find no conflict, and in fact great Synergy. I highly recommend Iaido not only to Aikido practitioners, but to students and teachers of other martial arts as well.

In Walking move first from the Sacrum, not from the foot 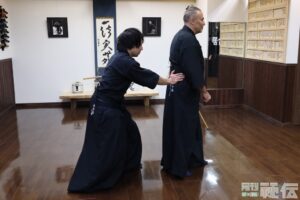 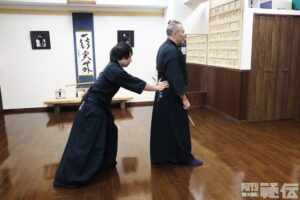 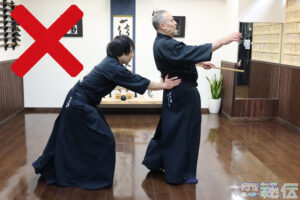 If the Sacrum is energized it enhances the quality of all of your movements. Have your partner push you from behind with both hands at your Sacrum, then take a step as he pushes. If you move first from your Sacrum you will be able to walk remaining centered and stable, even after you stop walking. If you move first from your foot when he pushes you while walking you will easily lose your balance. 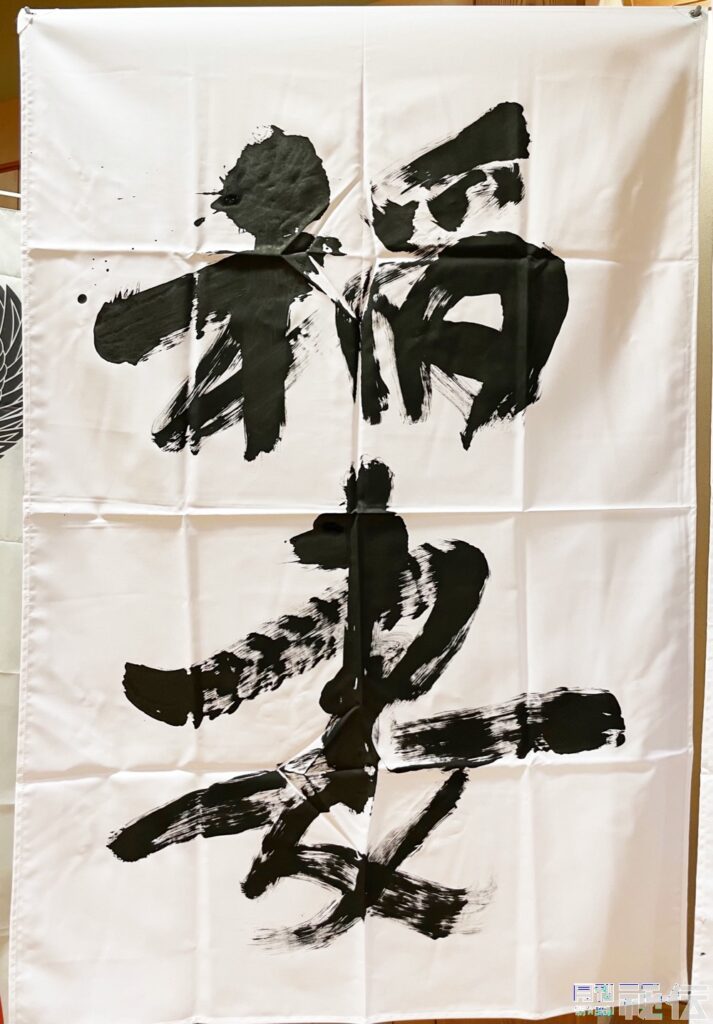 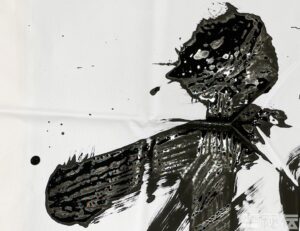 Reed painted a large work of Calligraphy to open the ceremony at the 5th Annual All Japan Iaido Jiyu Kumitachi Taikai. The characters at the right are 稲妻 (Inazuma), meaning Flash of Lightning. As in the Shodachi or first stroke of Iaido, the first stroke of Shodo in the character 稲 shown in the photo above shows exceptional power, as you can imagine from the volume of ink in the first strike, which took several hours to dry. 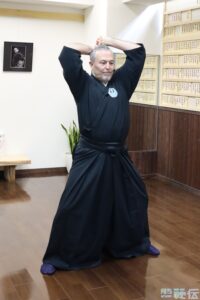 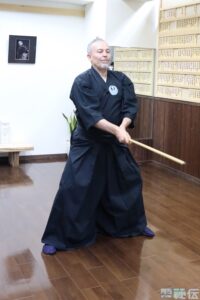 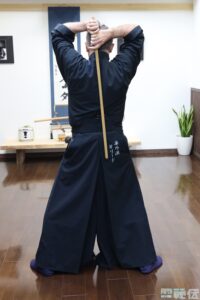 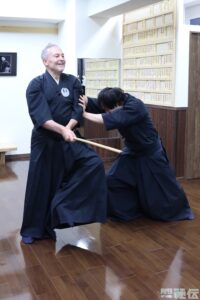 Stand with feet wide apart and bend your knees, as if riding on horseback. Draw the sword back in a large arc from the Sacrum (Senkotsu) and make a large overhead cut through the centerline (Seichusen) (1~2). After raising the sword overhead tap the Sacrum with the back edge of the sword (3). If you swing the sword correctly, you will easily be able to stand on one leg, even as your partner pushes hard with both hands on your opposite shoulder (4). 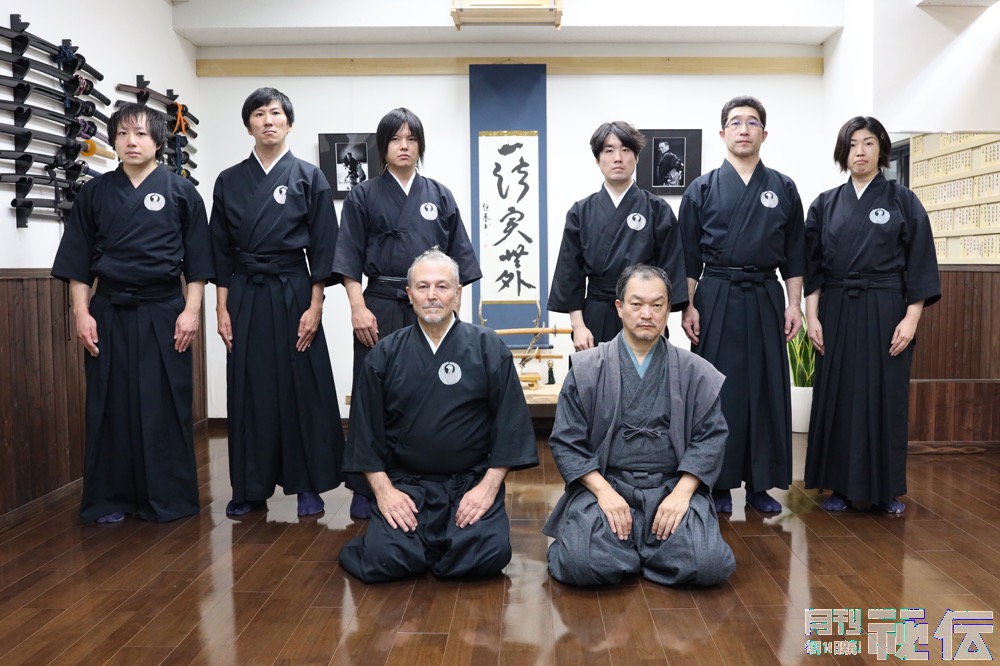 The Headquarters Dojo of the Mugairyu Hogyokukai located in Asakusa Kuramae. We express our appreciation to Takeda Hogyoku Sensei (front row right) and to his uchideshi students for their cooperation and use of the Dojo. 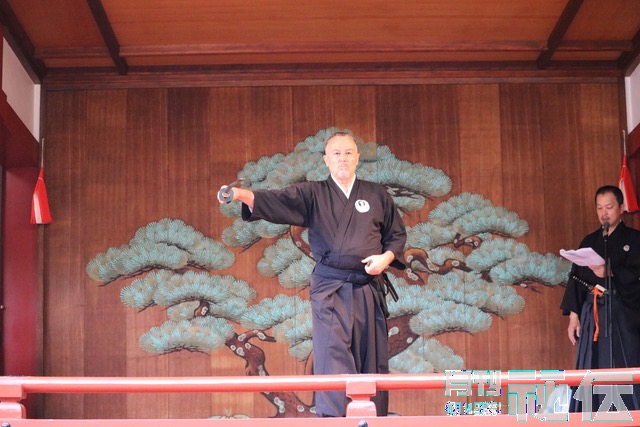 William Reed performed a solo Kata on the Kagura Stage at Asakusa Shrine as part of the Mugairyu Hogyokukai’s nationwide Iaido Demonstration in celebration of the release of the film Moeyo Ken (燃えよ剣, “Burn, O Sword”), which featured the Story of Shinsengumi or Shogun’s Elite Corps in the Bakumatsu at the end of the Tokugawa Period.

In this video William Reed explains how Aikido resolves the ancient paradox of irresistible force and immovable object by redirecting and leading the attack. 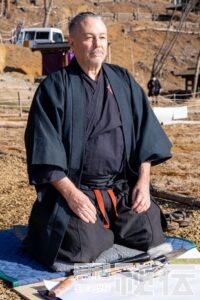 Born in the United States, William Reed is a long-time resident of Japan, and is currently a Professor of Japanese Culture at the International College of Liberal Arts (iCLA) at Yamanashi Gakuin University. He holds a 10th-dan in Shodo from the Zen Nihon Shodo Rengokai, and is a Headquarters appointed Vice Chairman of the Japan Calligraphy Education Association. He holds an 8th-dan in Aikido from the Aikido Yuishinkai. He is a Certified Graphology Adviser from the Japan Graphologist Association. He holds a Tokubetsu Shihan rank in Nanba, the Art of Physical Finesse. Director of the International Committee for the Mugairyu Hogyokukai, Director of Yamanashi Prefecture Hogyokukai (2nd-dan). A regular commentator on Yamanashi Broadcast Television Tetete TV, Navigator for NHK World Journeys in Japan, numerous documentaries, and has appeared on the long running Sekai Fushigi Hakken (Discover the World’s Mysteries). Certified in 2009 by World Champion of Public Speaking Craig Valentine, he has written a bestseller on this in Japanese 世界最高のプレゼン術 (Kadokawa Books, 2014). He is also author of Song of the Brush Dance of the Ink (Morgan James Publishing, 2022). He appears in the bestselling DVD on Nanba Walking 本当のナンバ歩き, and the DVD on Introduction to Mugairyu Iaido, both published by BAB Japan.