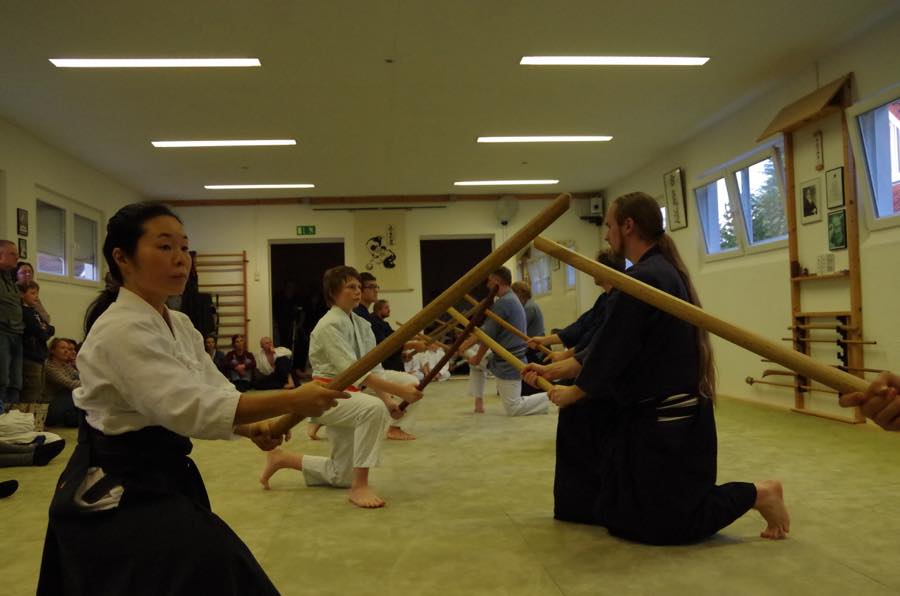 The representative of the historical Sugino Dojo of Tenshin Shoden Katori Shinto-ryu in Germany, Ulf Rott is the focus of this 22nd Worldwide Koryu Dojo Report. Also a 6th dan in aikido, Mr. Rott has been exploring Shinto-ryu for almost 30 years! 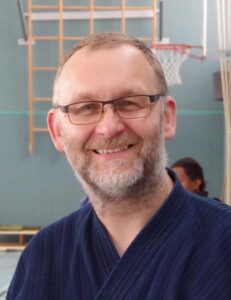 In 1993 I went to Japan to continue the practice of aikido at Aikikai Honbu Dojo. In late summer a Dutch friend asked me to visit the Dojo of Sugino Yoshio o-sensei in Kawasaki. It was a Tuesday afternoon and we both were very impressed by Sugino Yoshio o-sensei and his small group of mostly advanced people practicing Shinto-ryu together for more than three hours in the middle of the week. We both signed in and started practicing. After two months my friend had to stop for personal reasons; after a year, my former girlfriend who eventually became my wife, Izumi, accompanied me to Kawasaki and became a member. 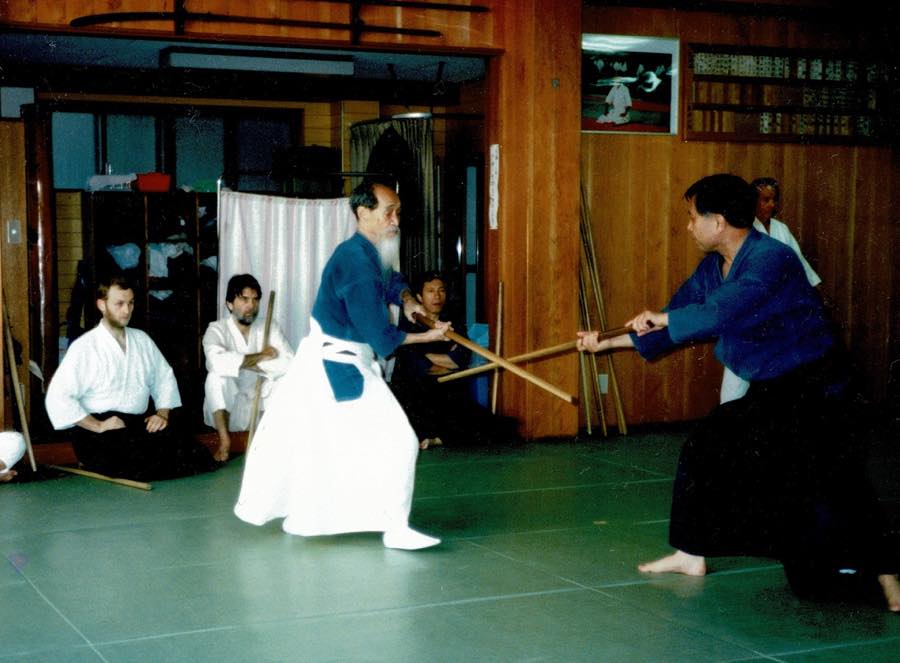 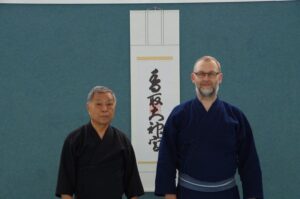 Tenshin Shoden Katori Shinto-ryu in Germany spread out from our Dojo. Now there are about 200 practitioners in different regions in Germany including Bremen, Hannover, Berlin, Nuremberg, Darmstadt, Heidelberg, Witten etc. In our region, in the northwest of Germany, there is Karate, Judo etc. but no much other classical art. With time, students spread out to the Netherlands and other countries and I travel regularly to the Czech Republic and Poland for teaching seminars and visit some of the dojo there. The people in these countries are part of the Doitsu Shibu and they also visit Germany to attend my or Sugino sensei’s seminars.

For about 15 years I organized a group travel for our students in Germany and some other European friends; now most students are independent enough to travel alone, but when we do travel to Japan, we are still always accompanied by younger students. It is always fun to introduce new people to Japan and its great colorful culture. Since 2000 Sugino Yukihiro sensei has been coming every year to teach multiple-day seminars in the Dojo of my students and international seminars in Brussels and in Leer. In the last seminar, in 2019 we had around 80 students from all over Europe in our small town of Leer; our 2020 seminar had to be canceled because of the Covid-19 pandemic. 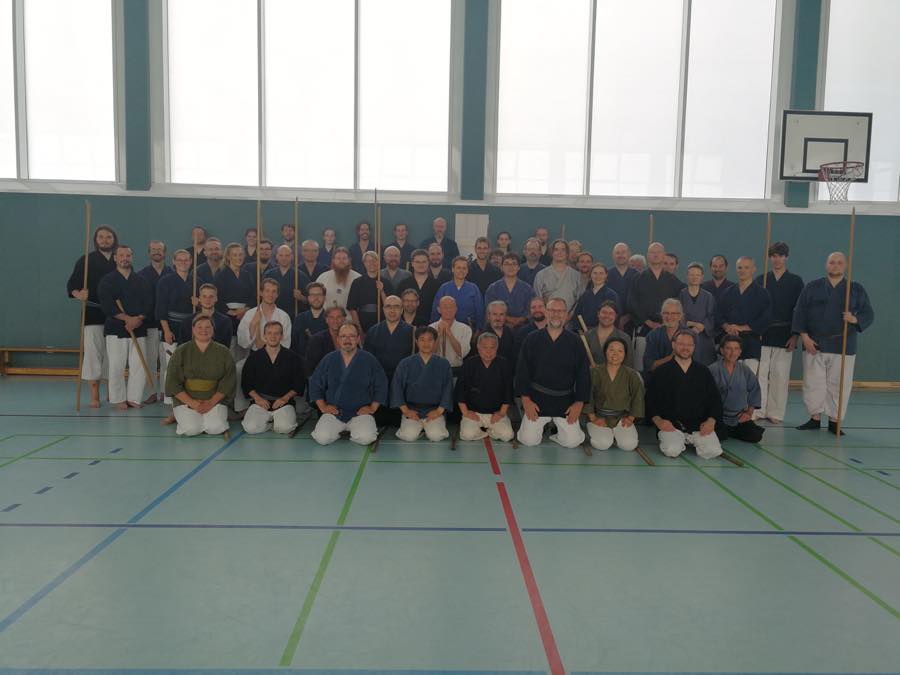 The most difficult thing for westerners is maybe the “gaman” (我慢) part: this means “patience”, “endurance” or “perseverance” but also has the nuance of restraining our ego. Another problem –especially in Europe- is that if we do not have a personal teacher in our dojo it will be difficult to make progress beyond a certain level: it is very difficult to learn the correct ma if you do not have the chance to practice regularly with an advanced person to get the feeling and experience; since “ma” (間) can be timing, space, rhythm, distance it is not enough to just copy the form. That is something that is often difficult to get when you are practicing kobudo in the West. 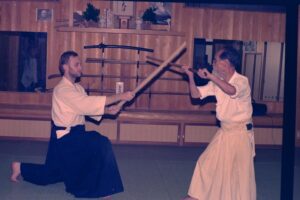 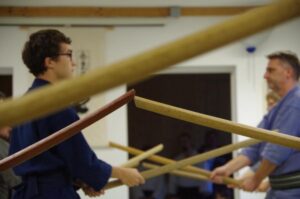 In classical budo we practice always on the edge of live and death; that way we should always have respect for training, dojo, teachers partner etc. That is very different from winning and loosing in a typical sports way and more than physical workout. So in a way kobudo is “a kind of sports” but not “real sports”. A friend once said “I practice so I can be prepared when someone on the street comes to attack me with a sword.” On one hand this is a joke, but on the other hand this says that the benefit is not always visible as seen from the outside. 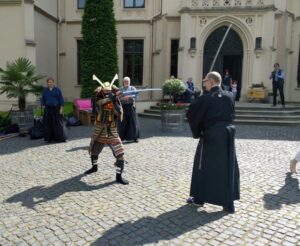 Demonstration at a Cultural Festival (2017)

Like a sword that needs to be polished regularly, your mind also needs to be polished. With classical Japanese martial arts you find a traditional way for that, for forming your body and mind. You will easily understand that you do not need to be physically strong and hard in mind to win. In this way a classical martial art can also be a way of personal life and peace. In my work, as the principal of a big high school, I very often feel the benefit of my practice dealing with students, parents and colleagues at all levels. 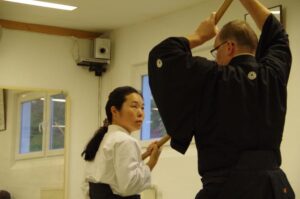 When we came to Leer in 1996 there was one more Japanese, a catholic priest of the catholic hospital. Since then, except some exchange students, my wife Izumi is the only Japanese person in Leer. Also in the towns near by there are only some isolated Japanese-German couples. So in a way, we are the representatives of Japanese culture in Leer and we participate in international cultural events in the region. My wife teaches drawing manga and I started a Japanese language club at my school. We were able to organize a partnership with a Japanese high school and through that, we have regular exchange students every year.