After months of physical distanciation and the successive cancellations of numerous classes and events, Tokyoite budoka were recently able to gather in person once again for a special 1-day aikido seminar supplemented with demonstrations of classical bujutsu.

The initiative came from Okawada Takamori, the leader of the Tokyo Riverside Aikido Association, who when asked about his motivations for organizing this event, said that he not only wanted to gather practitioners physically for practice once again, but that he also meant to encourage more communication and collaboration between practitioners of Japanese budo, be they gendai budo or kobudo, so they could continue to develop and affect positively the lives of many people. 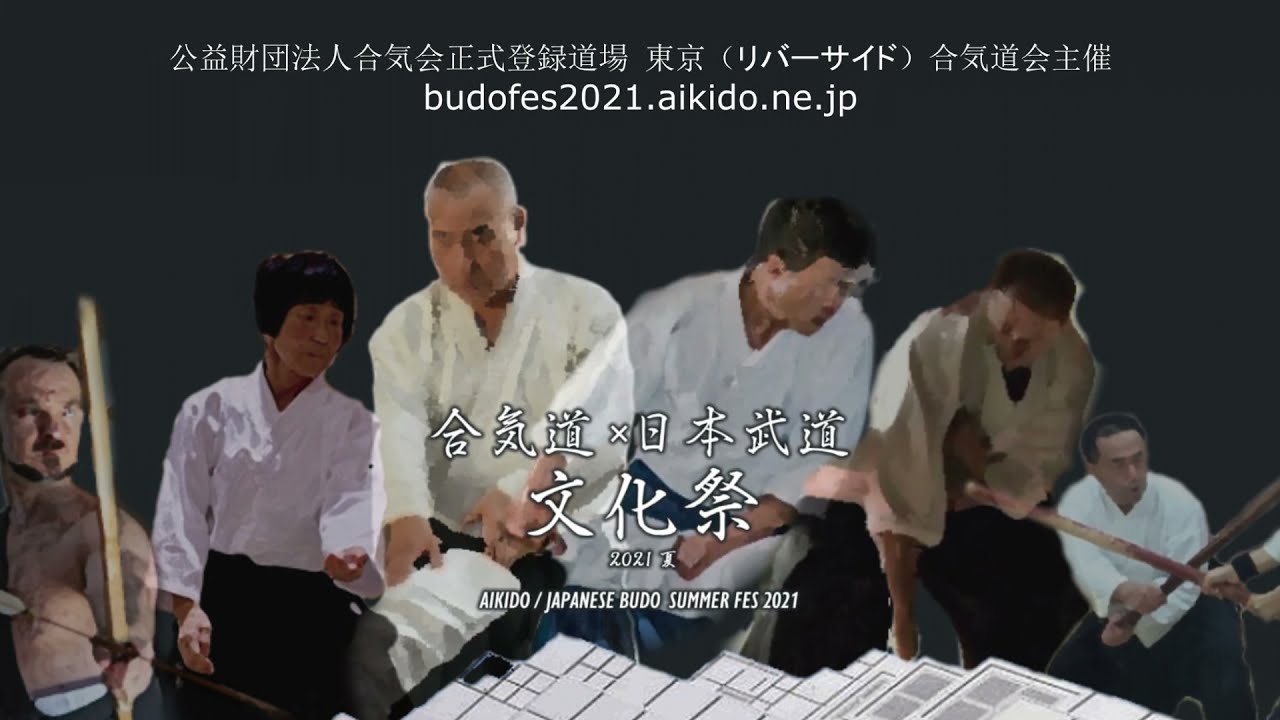 In spite of the particularly inclement weather, close to 130 practitioners came to the Tokyo Budokan to attend one or several of the four classes, which were instructed by long term practitioners of the Aikikai Hombu Dojo who also run their own dojos in the greater Tokyo area. The instructors for the day were Yamashima Takeshi (8th dan) of Chioda Ward Aikikai, Kinoshita Etsuko (6th dan) of Aikido Kinoshita Dojo, Ishi Masato (6th dan) of Harukaze Aikidokai and Guillaume Erard (5th dan) of Yokohama AikiDojo.

The event kicked off at 1pm with a class led by Kinoshita Etsuko Shihan. Kinoshita Sensei went through the fundamentals of practice, starting with proper bowing, ukemi, and footwork, which set the participants in the ideal frame of mind to make the most of the day. She then proceeded to have the participant put those fundamentals in practice through several techniques such as shiho nage and kokyu nage. 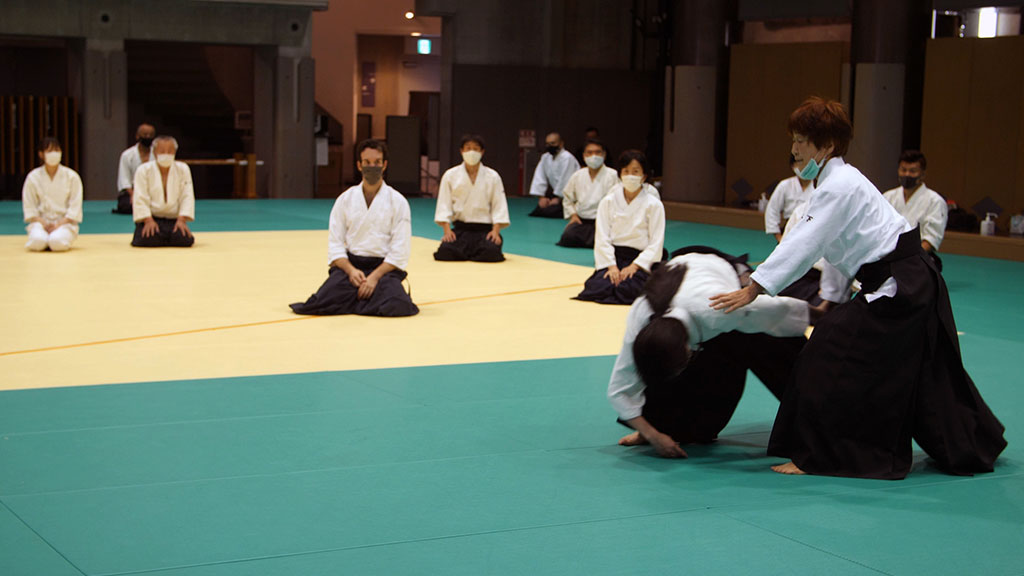 Kinoshita Sensei’s class was followed by a demonstration of Shinkage-ryu Heihō Kenshinkai by Otsuka Toshiaki Shihan and Kunio Yaguchi Shidoin. In keeping with the educational theme of the day, the pair supplemented their demonstration of the basic kata of their school with explanations on some specifics about their school, in particular their characteristic fukuroshinai. 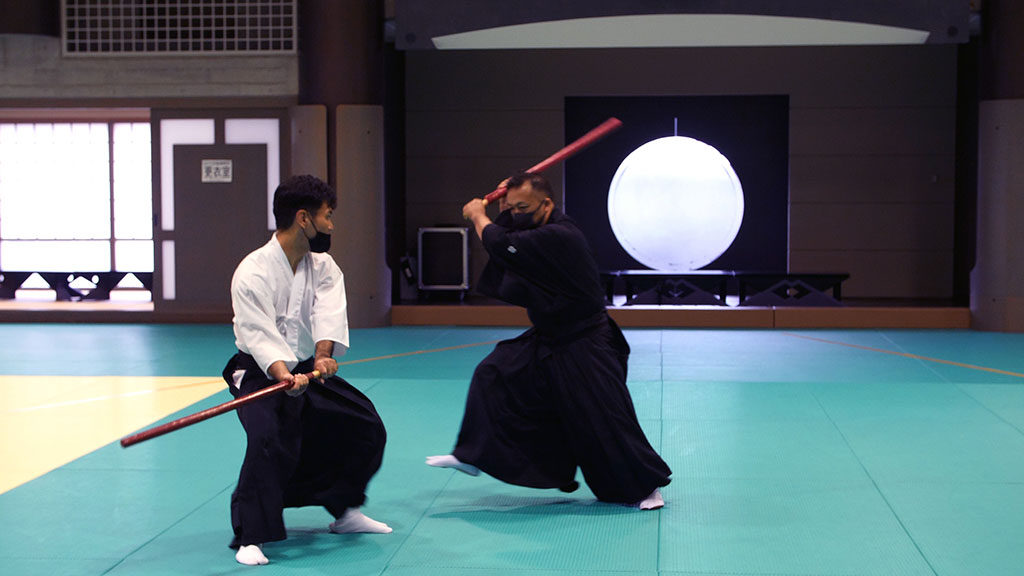 Immediately after the demonstration, Ishi Masato stepped on the tatami. Ishi is a close student of Osawa Hayato Shihan, and he proceeded to give a very detailed explanation of the specific footwork and use of the body developed by his teacher, leading to both an increased velocity, reactivity, but also power. Ishi also put some emphasis on the gonosen timing that is so central to this particular form of aikido. 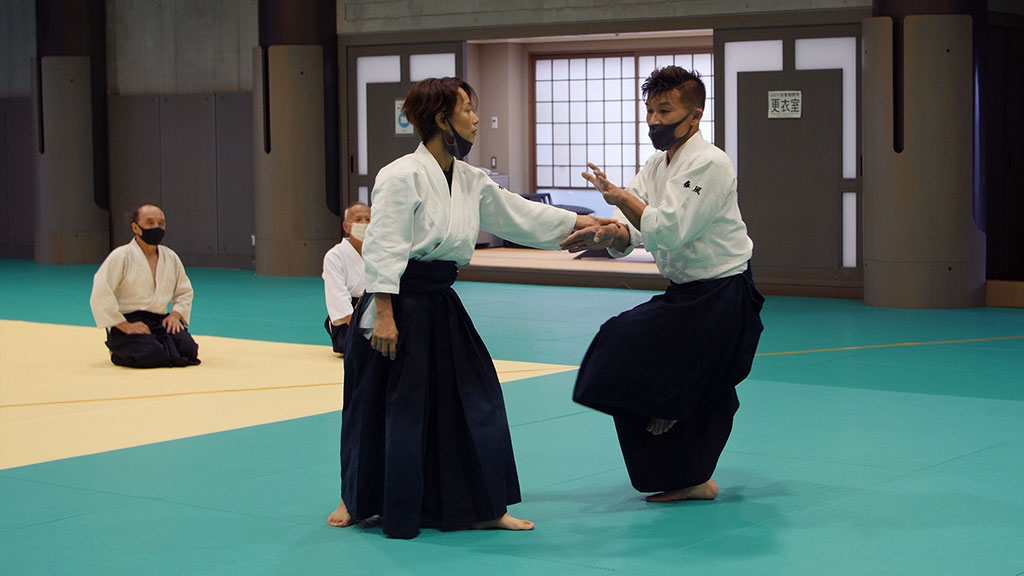 Following Ishi’s class, Kaiwa Hideyuki (menkyo kaiden) and Kohno Nadao, two senior members of the Ono-ha Itto-ryu stepped on the tatami with their characteristically thick onigote. Kaiwa went through great lengths explaining the historical reasons behind some of the movements featured in their school, including an explanation on how they might translate when applied to empty-handed techniques. 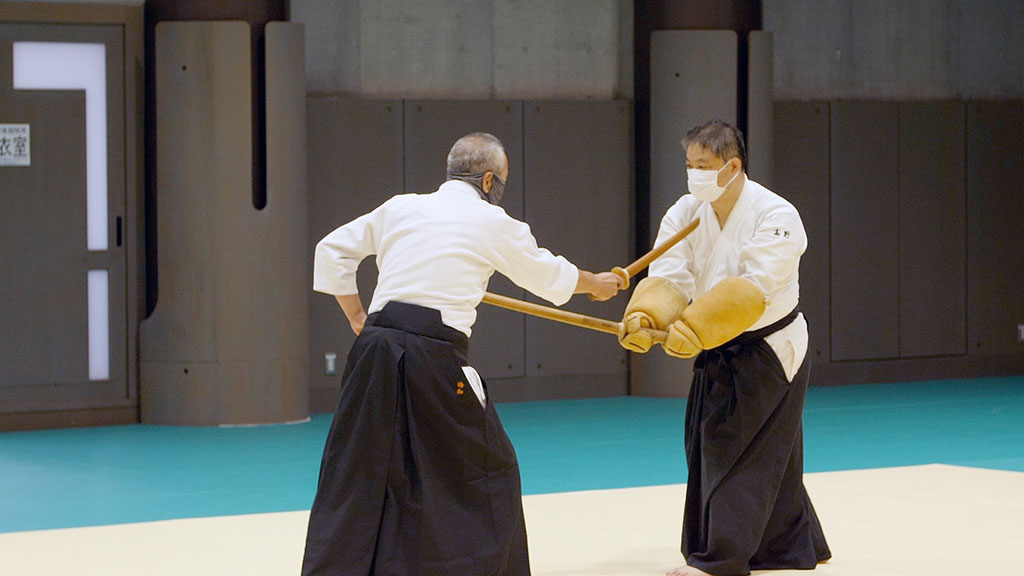 Guillaume Erard then gave a high energy class based on the projections and ample techniques made famous by Christian Tissier. While resolutely modern in his approach, Erard, who is also a 5th dan Daito-ryu Aiki-jujutsu instructor, also made a number of parallels between Daito-ryu and Aikido techniques in order to highlight what made Ueshiba Morihei’s Aikido unique. He insisted in particular on the responsibility that the aikidoka has on the safety and well being of his opponent, offering the opponent a way out of conflict, both physically and mentally. 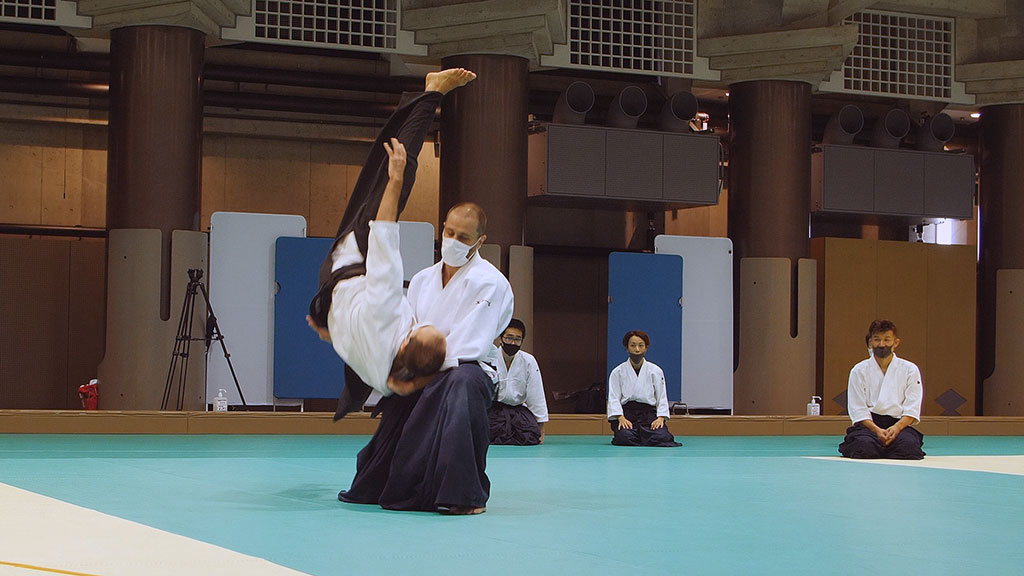 The final demonstration was given by another foreigner, Leandro Diaz Napolitano, who ran the attendees through the basics of Heki-ryu Insai-ha Kyu-jutsu, an ancient style of archery going back all the way to the 15th century. Napoletano conveyed both the very formal, ceremonial nature of training, but also the down to earth and practical applications on the battlefield. 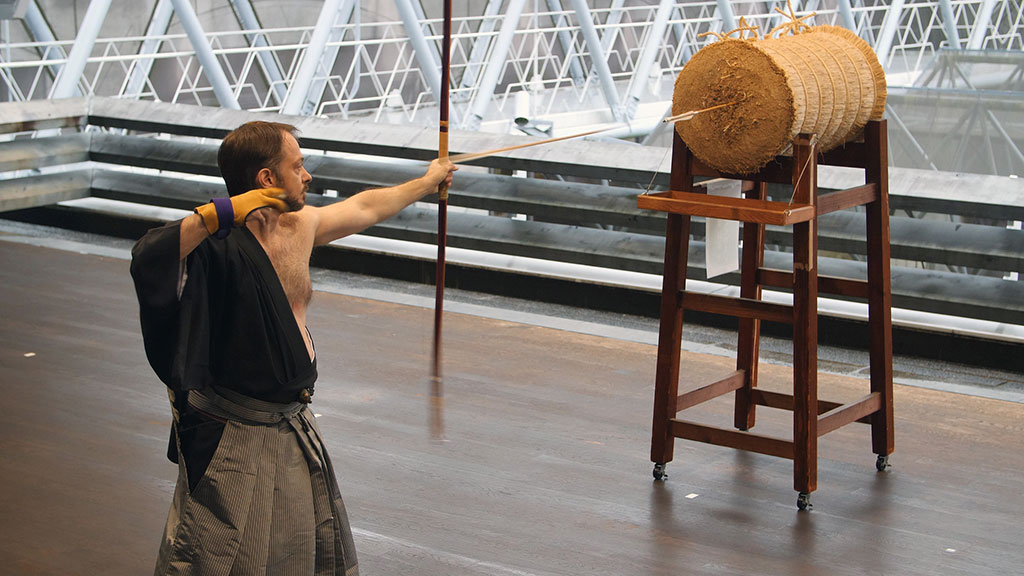 The last class of the day was held by Yamashima Takeshi Shihan. Yamashima Sensei is well regarded for the soft yet direct aikido that he developed through years of study under the great Yamaguchi Seigo Sensei. Yamashima insisted on the connection center to center and the relatively large effects that minute motions triggered from the point of contact. By the time Yamashima Sensei’s class started some of the practitioners had been on the tatami for close to five hours, but the level of energy did not dwindle, and they gave their best until the end. 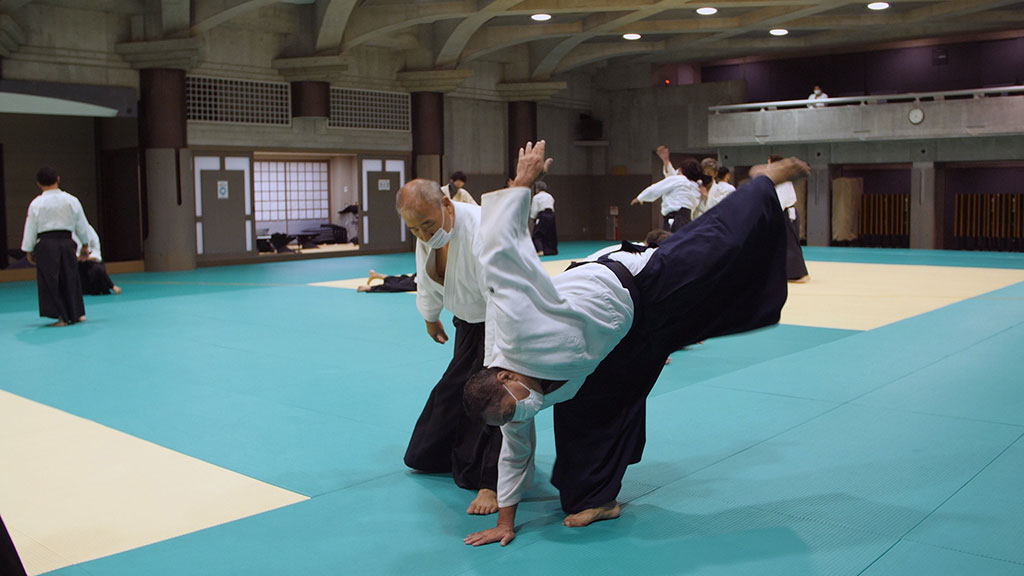 Okawada closed the event by thanking the instructors, demonstrators, and various helpers, all of whom were volunteers. He also thanked the attendees and mentioned that he intends this to be a recurring event. We will be looking forward to seeing this project expand and continue fostering communication and understanding between practitioners of Japanese budo.