After a very tasty meal at the training center’s cafeteria, we went to one of the small dojo which had been converted to a lecture hall; this time to hear Koyama Masashi, principal of the Sakarazuka High School in Osaka and chairman of the Japanese Academy of Budo Division of Karatedo, multiple champion both in kata and in kumite competitions. His lecture/presentation’s core were the three major landmarks in karate history: the Meiji era, when karate stopped being a secret art and became a part of the Okinawan school system, the Taisho era when it was introduced to Japan and the post-war Showa era, when it was re-organized and spread all over the world; for Koyama sensei, our present era can very well become karate’s fourth major landmark because of the introduction of budo in schools.

In the second part of his lecture, Koyama sensei explored some of the challenges karate has to face for its inclusion to the school system; since there is no doubt of its educational value (which was also the title of his lecture) the main issue is the creation of a “main stream” of karate that will combine the essential elements from the four major styles (Shotokan, Wado Ryu, Goju Ryu and Shito Ryu). Using himself, a karateka from the audience and (much to her surprise) the interpreter Mrs. Helen Iwata (an Itosu Ryu practitioner) as models and karate’s high block (age-uke) as an example, Koyama sensei illustrated how the subtle differences between styles can be bypassed for the benefit of the junior high school students

After the lecture was over, we all moved to the main dojo for the official group photo, a series of demonstrations of the nine budo (judo, kendo, naginata, aikido, kyudo, sumo, Shorinji Kenpo, karate and jukendo) by top level teachers and for what might well be the ISBC’s most interesting part: where practitioners have the opportunity to try out a budo different than the one(s) they usually practice. That is not to say that the demonstrations weren’t interesting though; even though all attendees live and train in Japan, they don’t always have a chance to see teachers of this level demonstrating what they consider the highlights of their art for example, the Kendo no Kata with real swords as performed by Sakudo hanshi and Ijima Akira Kyoshi, the eight Zen Nihon naginata kata as performed by Kimura Yasuko kyoshi and Narita Toyoko kyoshi or the judo Itsutsu no Kata as performed by 7 dan shihan Miyakochi Koichi and 6 dan Olympian Koshino Tadanori.

Still, and judging from what I discussed with the seminar attendees the “Experiencing a New Budo” is the all-time favorite. Even though the nine budo are well represented all over Japan, most trainees very rarely have a chance to train at a facility that offers classes in all of them; and even if they do, most teachers aren’t going to offer introductory classes to anyone wishing to just get a taste of their art! In the ISBC, the only thing an attendee needs to do is sign their name on a board, together with the art they would like to try and the next day they have the opportunity to try it under the guidance of a 6th or 7th dan teacher; even if only for 1-2 hours, this “sampling” can offer the student a hands-on insight of an art he might never have seen before (or in the case of sumo, an art he most probably has seen but almost certainly hasn’t tried!) 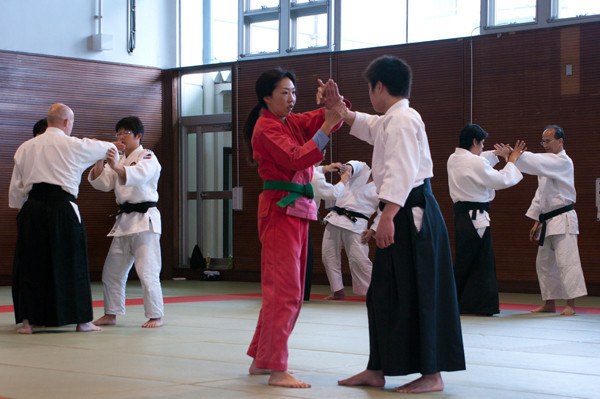 “I always wanted to get my hands on a real Japanese bow”, told us an aikidoka from France “But there is no kyudo dojo where I live. And even if it was, it would take maybe six months before I would be allowed to shoot at a real target. Here, I got the chance to try after a short introductory talk –and I didn’t do half bad, either!” In similar lines was an American jujutsuka’s experience of aikido: “I always hear that aikido has common roots with jujutsu but I always thought it looked more like a dance than a real martial art and I would have never gone to an aikido dojo to start learning. In this introductory class with Sugawara sensei, a 7th dan from the Aikikai Honbu, I found out it is a real martial art –and I found it out the hard way! It was a very interesting experience”.

The “Experiencing a New Budo” session was followed by the evening meal and after that there was another ISBC favorite: a free practice session where attendees have the chance to cross-train and try things out with practitioners of other arts. For some of the attendees, these sessions alone are worth the travel to Katsuura once a year because they can experiment freely without the supervision of their teachers. Since the last few years, cross-training has become very popular all over the world and considering the broad spectrum of available arts (this year, the ISBC had 90 attendees) the combinations are almost endless. “Where else can you get the chance to be on the same mat and cross hands with two karateka from two different styles, one judoka and one practitioner of Philippino kali?” said a Canadian tai chi practitioner. “And even if you do, it’s very rare to have the cooperative spirit you get in ISBC. People don’t come here to prove anything; they come to learn, make new friends and earnestly research their art”.

This last part, the creation of relationships and the networking is probably what most ISBC attendees consider the seminar’s greatest attraction; this is also reflected on the fact that 60-70% of the participants return every year (we even met people who have attended all 24 years and others who don’t live in Japan anymore but who came back just for the ISBC). Even though most seminar attendees live in Japan long enough to be fluent in Japanese, have steady jobs and even families here, being budo practitioners puts them in a sometimes awkward minority: not only are they foreigners, but they are foreigners involved in an activity very unique even for most Japanese. No wonder that they like to meet other people who are like them and spend a few days living together, training and discussing what they love most: budo.

Sunday, March 11 was still cold but the rain had stopped and a weak sun was climbing up the sky. I bade very reluctantly the kotatsu in my ryokan room goodbye and returned to the IBU for the big general discussion on the educational power of budo, the culmination of the ISBC’s theoretical side. The panel was impressive: under the direction of IBU Professor Uozumi Takashi, director of Budo and Sports Research Institute, distinguished researcher and author of many important books on budo, all the instructors from the nine budo were lined up and took turns to express their ideas about how budo in general and their budo in particular can contribute to the educational system. Their views, as expected from such an illustrious panel were very interesting and even though none of speakers failed to mention the challenges facing the budo educators from the inclusion of their arts in the school system, they all seemed determined to face these challenges and overcome them.

One of the main issues, mentioned by both the members of the panel and the questioning attendees was the matter of the number of hours the Ministry of Education has allocated for budo lessons; there are only 10-12 hours per school year and since all present were practitioners of these arts, they expressed their doubts about what can be really conveyed to a beginner in such a small time frame. What most teachers seem to agree upon, was that it is a rare opportunity for all of them to contemplate what is the most important part of their art and how it can be transmitted to 21st century teenagers living in the tempestuous times of this globalized age. Even though they all looked a little troubled by this challenge, their optimism shone through and almost everybody agreed that the outcome will be positive.

Once again, it was time to leave the IBU facilities and return to the Nippon Budokan Training Center for lunch and one more session of “Experiencing a New Budo” and training under the nine arts’ teachers; for some seminar attendees these training sessions are also a reason to come to the ISBC since back home they rarely have a chance to train under a high level teacher. Before the “Experiencing a New Budo” session, though, there was a small tribute to the victims of the Great East Japan Earthquake Disaster; caught in the excitement of the seminar, some might have overlooked that today was March 11, Japan’s grimmer post-war anniversary. Everybody lined up in the big dojo and a moment of silence was kept for the people who one year ago today lost their families, their homes and their lives. Seeing all these strong people of budo bending their head in silent prayer was a reminder of the frailty of human life but at that precise moment, the sun came out of a cloud and shone bright through the surrounding glass panels reminding that as fragile as it is, life never stops.

The afternoon came and it was my time to leave; I had a train to catch and I had to return home, write this report and sort the photographs that accompany it. The 90 participants from all over the world who have, at one point or another, made Japan their second home, continued training, laughing, learning and bonding with each other, with their new seniors and teachers and with the culture they have chosen to explore. I walked down the steep hill that passes through a bamboo thicket and reached the main road that leads to Katsuura station while thinking how great an opportunity this is and what ties it helps create between foreigners and Japan, its past and its future. I particularly remembered Dr. Saito Kazuo, sumo 7th dan and Managing Director of All Japan Sumo Federation who, when teaching the seminar attendees who wanted to experience Japan’s national sport, said “In everyday sumo training we do 200 shiko in the beginning and 300 in the end” and I thought that those people attending his class had the rare opportunity to feel what the yokozuna feels during his dohyo-iri. How many foreigners can say that?