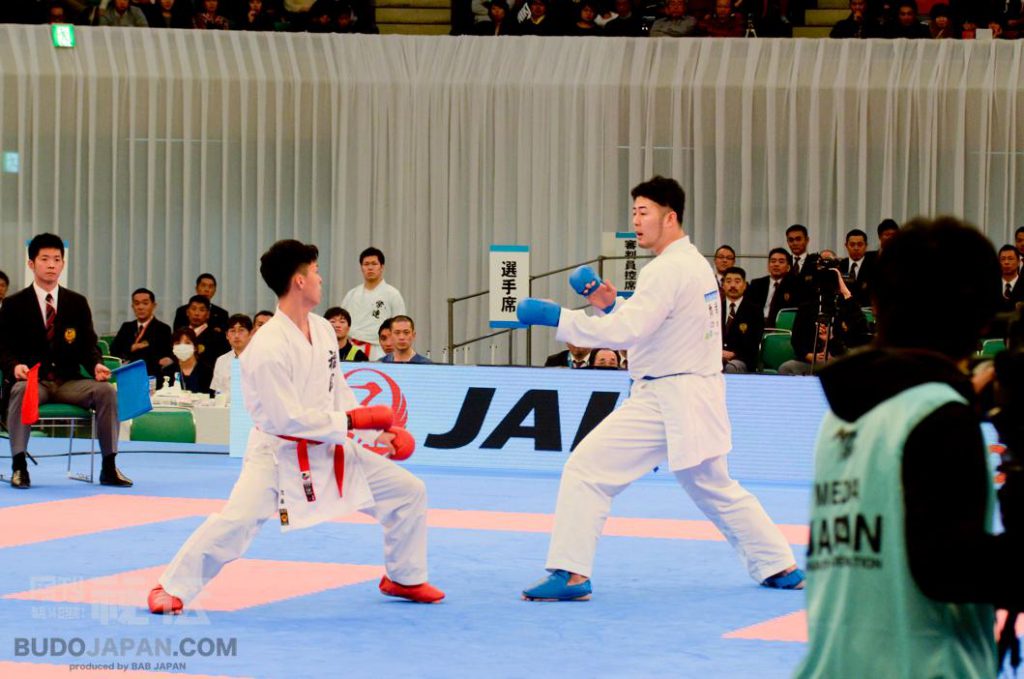 My problem with sports, cont’d

It’s been only a few months since I wrote, in my story about the 3rd World Kyudo Taikai and the seminar that went with it (Issue 7, July 2018) that I’m not particularly fond of sports and that one of the things that drew me to to classic martial arts was that they don’t involve competition. To explain myself a little further, it isn’t that I don’t like exercise –I do! It is that I don’t understand the rationale of sports: two people or teams play a game and one wins and the other loses. And? What does that mean? The winner gets some recognition of their win which is temporary since on a next match they will probably lose and they get happy because -what? They won? What did they win, exactly? 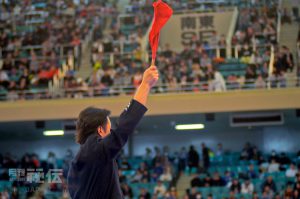 As you can tell from the above, my career (in lack of a better word) in karate, Kendo Federation iaido, kendo, judo and naginata wasn’t exactly stellar: I could never care enough to try my best for a match and I was never a very good spectator either. Come to think of it, other than sumo which I watch on a regular basis but just for the atmosphere (I don’t care much about who wins or loses, besides, we all know who wins: Hakuho!) I don’t even care much about watching sporting events either. And yes, there was that time at the 3rd World Kyudo Taikai that I was really excited but, hey, that was one time! 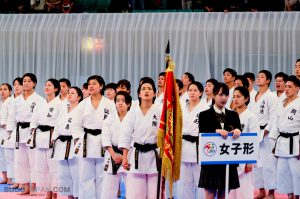 So what was I doing at the Nippon Budokan on December 9, watching the semifinals and finals of the Japan Karate Federation’s 46th Japan Cup Karatedo Championships? This was a pure sporting event with participants who have a good chance to be participating in karate’s debut in the 2020 Olympic Games. In the Federation’s website it’s stated clearly that “Since [1964, when it was formed], JKF has established the status of Karate as a national sport by their work such as enrollment in the Japan Sports Association and participation in Japan National Sports Festivals.” So no “martial art” but “sport”. Fighting sport, no doubt but sport never the less. 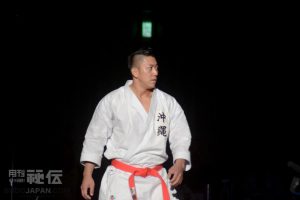 As a result of my lack of interest in sports, the number of times I’ve been to a sport event are extremely limited –I’d say less than a dozen. So when I entered the Nippon Budokan the blast wave almost knocked me down: all the lights in the hall were on, the seats were full and the people were shouting to support their favorite, well, players. (It’s not me: like in all sports events, the suffix after each participant’s name was “senshu” so if a “yakyu senshu” is a “ball player” a “karate senshu” is a “karate player”, right?) And there was music, and huge screens (other than those of the Budokan) and loud announcements, more lights, and dozens of TV crews with cameras, and a fancy program booklet with the names and resumes of the, yes, players. And more lights. 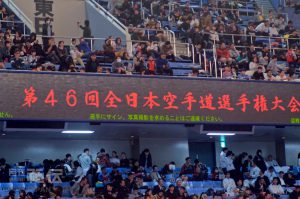 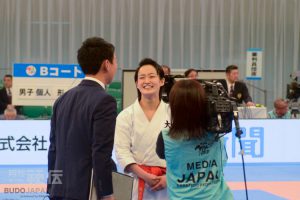 I don’t want to misrepresent myself: I only watched the individuals’ semifinals and finals of the men and women in kumite and kata, that is the matches between Junya Eto and Hideyoshi Kagawa and Daiki Ando and Rikiya Iimura (semifinals men, kumite) and between Hideyoshi Kagawa and Daiki Ando (final), those between Ayumi Uekusa and Mahoko Kasahara and Shimada Sarara and Yatoji Ayumu (semifinals women, kumite) and between Ayumi Uekusa and Yatoji Ayumu (final), those between Ryo Kiyuna and Yuya Funamoto and Takumi Sugino and Taigo Kozaki (semifinals men, kata) and between Ryo Kiyuna and Takumi Sugino (final) and between Kiyou Shimizu and Mirisa Ouchi and Yuri Sumitomo and Chinatsu Endo (semifinals wome, kata) and Kiyou Shimizu and Chinatsu Endo (final). This means that even if I left my issues with sports aside, my impressions would be limited anyway so please take everything you read with a big grain of salt! 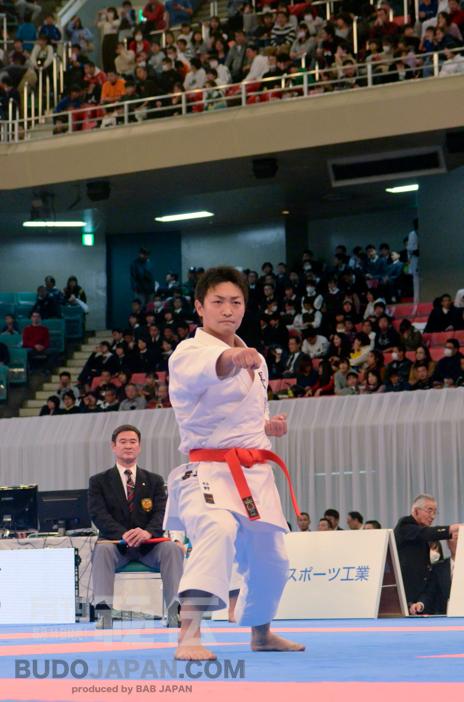 First the kumite -and this is for both men and women: the rules of the World Karate Federation say that scores can be ippon, waza-ari or yuko (three, two and one point, respectively) and for any score to be awarded, the technique needs to be performed with “good form”, “sporting attitude”, “vigorous application”, “awareness (zanshin)”, “good timing” and “correct distance” on the designated targets (head, face, neck, abdomen, chest, back, and side). But, for an ippon the player needs either a jodan kick (i.e. kick to the face) or a scoring technique on a fallen opponent and for a waza-ari, they need a chudan kick -punches and strikes (tsuki and uchi) only get yuko, that is just one point. 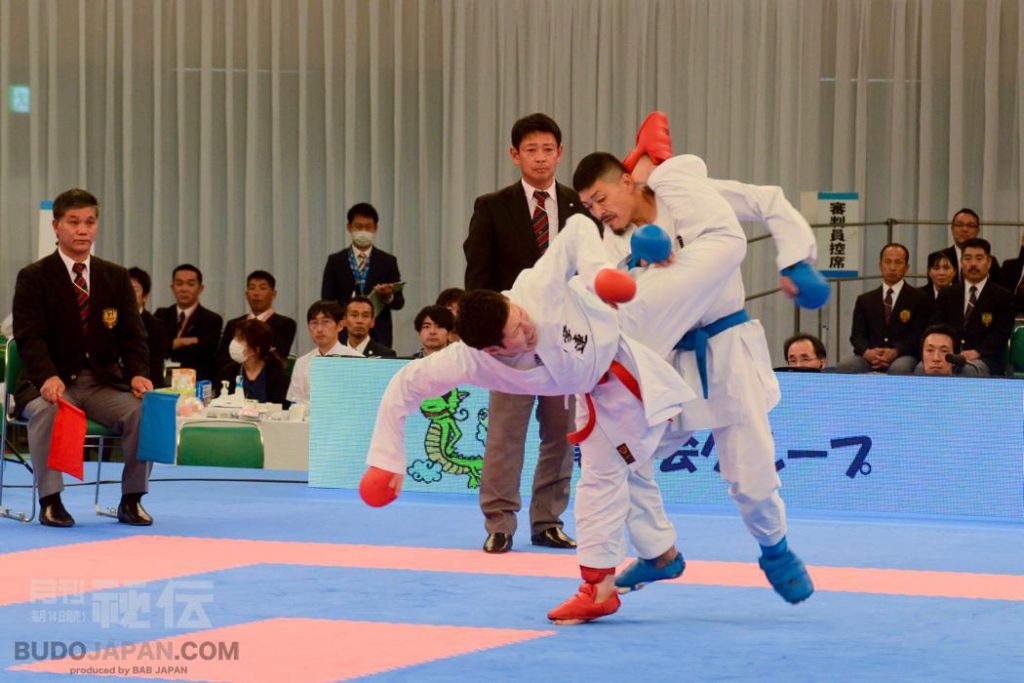 I have said before that my entry to the world of Japan’s martial arts was Shotokan Karate as taught by the Japan Karate Association of the Nakayama period. Which means that my understanding of karate was built on the idea that you need to work hours and days and months and years on the makiwara to develop the “ikken hisatsu”, the “one punch kill” –yes karateka used to work their leg techniques but hand strikes were of paramount importance so seeing this balance disturbed to the benefit of fancy kicks (a jodan kick is fancy by definition!) made me feel uncomfortable and combined with the red and blue mits, belts and leg protectors and the constant bouncing of the two players made me feel sad because, basically, they brought to mind Taekwondo. 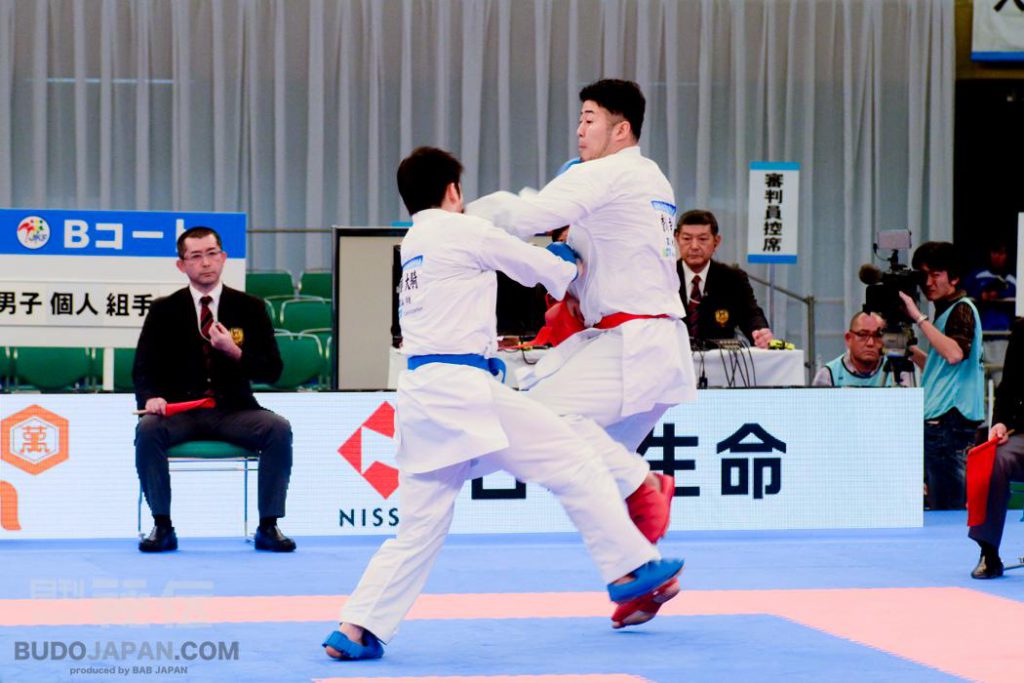 Just to avoid any misunderstandings, I don’t have anything against Taekwondo! Judged on its own merits, it’s an exciting sport (yes, I don’t like sports but let’s put that aside for a moment!) and I have met several very serious martial artists who started their journey with it –and a couple who stayed on it until the end. But if we want Taekwondo we already have one: karate has its own legacy and one that goes back centuries and spreads over many different traditions in two different cultures, that of the islands of Okinawa and that of main Japan. In my eyes, the karate of the 46th Japan Cup Karatedo Championships was not as much representative of this legacy as I would like; in other words, its look was closer to Taekwondo than to the karate I knew over 30 years ago.

I had similar issues with the kata, again both in men and women: the players can choose from a set of 102 kata from the four styles that comprise the curriculum of JKF’s style (Shotokan, Wado-ryu, Goju-ryu and Shito-ryu) and the criteria are separated in two areas, technical performance (stances, techniques, transitional movements, timing, correct breathing, focus/kime, and conformance with the basic techniques/kihon of the style/ryu the kata comes from) and athletic performance (strength, speed and balance). All very nice on paper but what I saw was for the most part too much emphasis on the word “performance”: almost all the moves seemed to me exaggerated to the point of being unnatural and I joked with my colleagues that in my mind a correct execution of a kata was almost completely the reverse of what I saw! 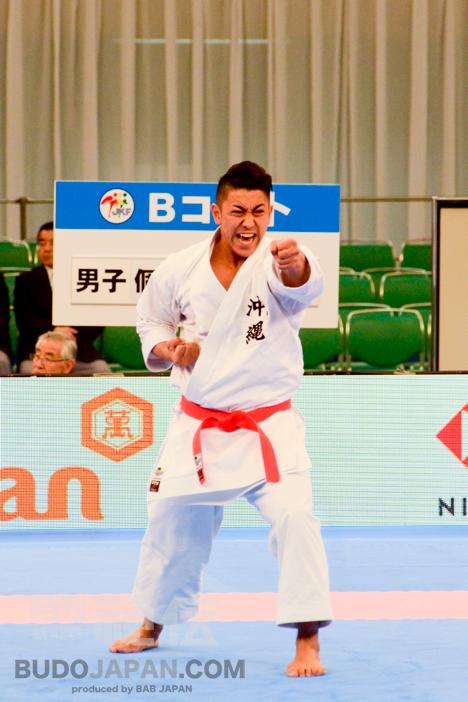 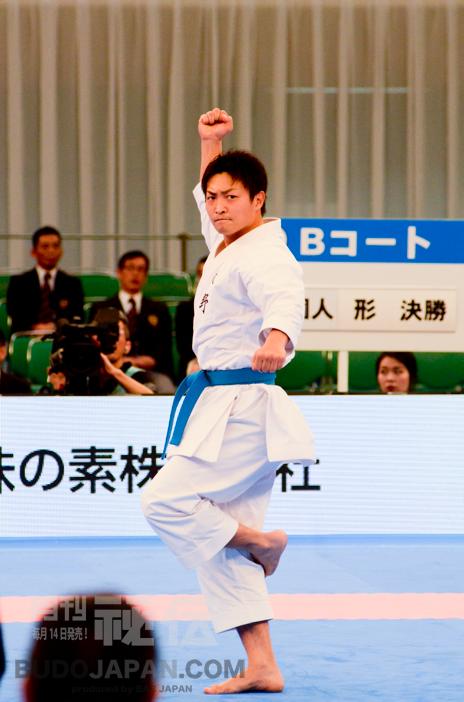 The thing is that the crowd loved it and the judges rewarded it, proving that I am completely out of touch with the requirements of JFK’s brand of karate. And this doesn’t only have to do with the fact that I only did three years of karate 30 years ago: my wanderings along the ways of the martial arts had always been guided by the idea of danger and how to use it to improve both your technique and yourself. In this style of karate danger is pretty much eliminated (bad luck excluded, of course) and the guiding principle seems to be the presentation of a spectacle that comes from the martial arts but has unmistakably deviated significantly from them. Come on: when it was time for the final, everything went dark, the screens started playing a video with fire explosions and the players were literally in spotlights that followed them to the mat! 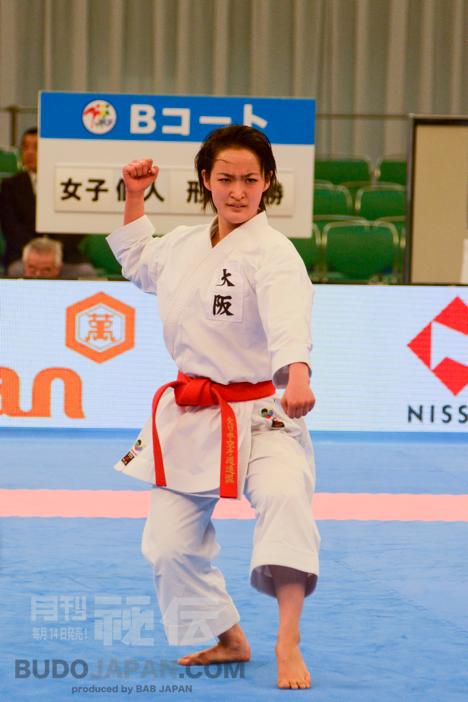 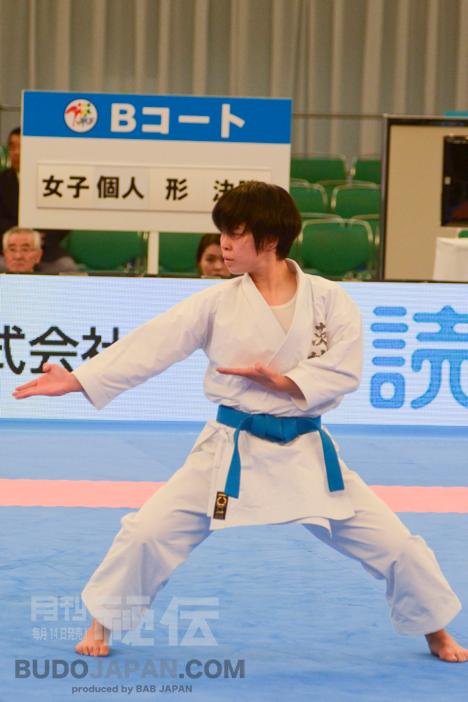 On the other hand

But there is a but: these people have put in their karate thousands of hours of training –arguably more than a hobbyist “orthodox” karateka who only practices two or three times a week. They have worked exhaustively their kata with their teachers and their coaches and to do that they have delved into the styles their kata come from, even if themselves haven’t practiced the actual style (JKF and its parent organization World Karate Federation have their own dan grades pretty much as there are International Judo Federation dan holders who aren’t necessarily Kodokan dan holders) and they have studied their opponents’ strategy in every detail, both in kata and in kumite, to lay out their own. Yes, they “play” for cups or medals but their preparation is real and you have to look very hard to distinguish it from that of a non-sportive martial artist. 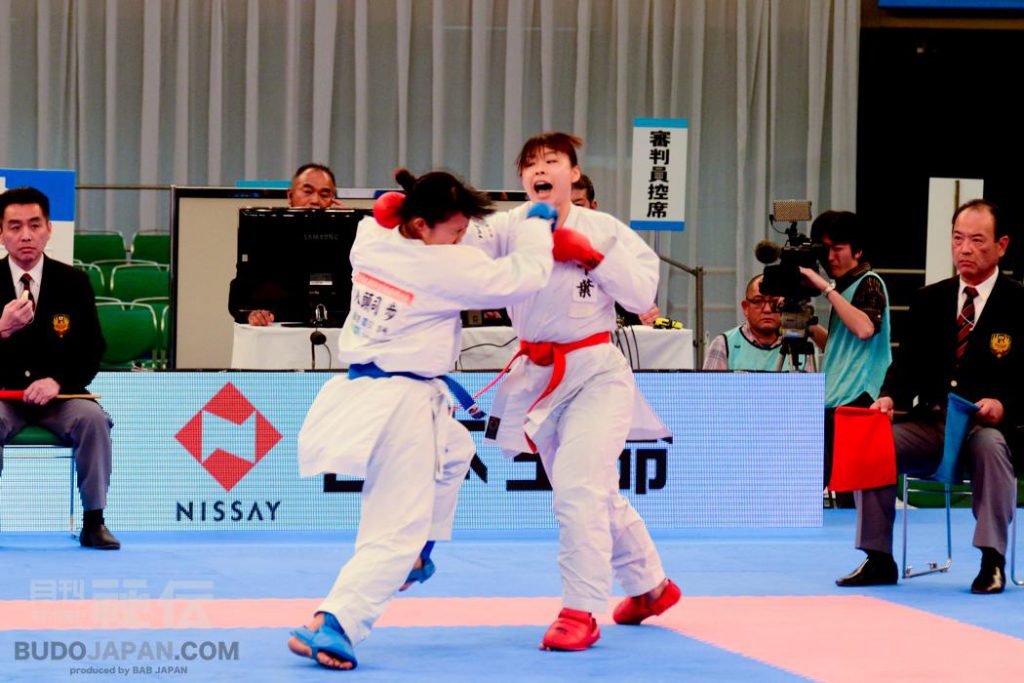 Even the danger is there -at least to some extent: even with protective gear on and even with light contact rules, a jodan kick (and players try for them since they are one of the two things that can give them an ippon) can very easily cause injuries, especially if you are not wearing a helmet -or even if you are: the Greek favorite for the +80kg gold medal in Taekwondo in the 2004 Olympics got knocked out in the final match with what in karate would be called an ushiro geri (back kick) to the face and his helmet couldn’t save him. So yes, maybe these people don’t fight to the death but it would be unfair to say they are just dancing.

I left the Nippon Budokan steeped in thought. Names like Kiyo Shimizu, Ayumi Uekusa, Ryo Kiyuna or Shoto Federation’s and Teikyo University’s Hideyoshi Kagawa have become household names in Japan and after 2020 and karate’s inclusion in the Olympic Games they will become international stars. Karate is without a doubt the most famous martial art and even though it has seen a temporary loss in popularity mostly because of the Mixed Martial Arts boom of the last 25 years, sport karate is a close enough relative to help it regain its old glory. And when it does, the effect will ripple through the whole martial arts world, pretty much like it did with judo: even sworn enemies of Olympic judo can’t deny its overall positive effect on the martial arts. 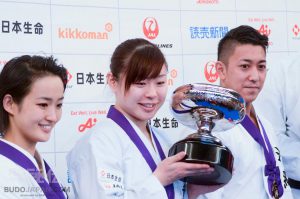 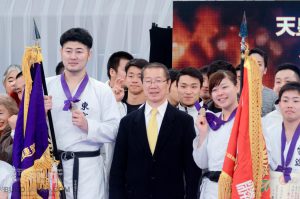 So perhaps all the objections I expressed before are just the griping of a grumpy middle-aged man whose chances of ever getting even a first dan in karate are getting slimmer with each passing year. Since the Edo Period, publicity activity to the extent and level of sophistication we’d call “marketing” today was, for better or for worse inextricable part of the martial arts, especially in the big cities and the martial artists who used it to lure students (customers?) weren’t necessarily thought of as “sellouts” neither were their skills considered inferior. As a matter of fact even we, the self-styled “purists” often owe the existence of the arts we practice to the entrepreneurial genius of some Edo Period instructor/businessman so maybe we should get off our high horses and accept both the hard work the Japan Karate Federation and its athletes do and the benefits we directly or indirectly reap from it. They certainly deserve it!

Grigoris Miliaresis has been practicing Japanese martial arts since 1986. He has dan grades in judo, aikido and iaido and has translated in Greek over 30 martial arts’ books including Jigoro Kano’s “Kodokan Judo”, Yagyu Munenori’s “The Life-Giving Sword”, Miyamoto Musashi’s “Book of Five Rings”, Takuan Shoho’s “The Unfettered Mind” and Donn Draeger’s “Martial Arts and Ways of Japan” trilogy. Since 2007 his practice has been exclusively in classic schools: Toda-ha Buko-ryu under Ellis Amdur in Greece and Kent Sorensen in Japan and, since 2016, Ono-ha Itto-ryu under 18th headmaster, Yabuki Yuji.
http://about.me/grigorismiliaresis