HOME >  Feature Articles >  【The Brush is the Sword of the Mind】Ohishi Kuranosuke: Leader of the 47 Rōnin

Many martial arts masters in the past have also been masters of the brush. The sword speaks to the brush, and the brush instructs the sword. With Mastery they become one. William Reed has a 10th-dan in Shodo and an 8th-dan in Aikido, and in this Series he looks at the human character behind the written character in Samurai Shodo. In the 7th article of this Series he paints and analyzes the brush writing of Ohishi Kuranosuke, the Leader of the 47 Rōnin, known to all Japanese in the story of Chūshingura.

Leader of the Akō 47 Rōnin

Chūshingura: the Mirror of Japanese Bushidō

Ohishi Yoshio (1659~1703) is known as Ohishi Kuranosuke, the Samurai Hero in Chūshingura, the story of the 47 Rōnin.

His Granduncle Tanomonosuke Yoshishige was his Guardian and Educator, responsible for raising both the third generation Lord of Akō, Asano Takuminokami and Ohishi Kuranosuke.

The incident with the Lord of Akō which sparked the dramatic story of Chūshingura is well known, but we will briefly summarize the events here. Upon bearing repeated insults, Lord Asano Takuminokami attacked the Chief Advisor on Etiquette to the Shogun and the Emperor Kira Kōsukunosuke in the Grand Pine Passageway of Edo Castle, and for his crime was ordered to commit seppuku ritual suicide on the same day. This was a disaster for the Asano family, and eventually lead 47 Loyal Retainers of Lord Asano to avenge their Lord by attacking the well-guarded residence of Kira Kōsukunosuke and taking his life. The incident was high-drama at the time, and inspired endless tellings of the story through Japanese narrative drama, Kabuki, and even to the present time through film, television, and novels, where it has perennial appeal. The leader who planned and executed the raid against all of the odds was Ohishi Kuranosuke.

The Ohishi family was related to the Tsugaru Hirosaki Clan, which kept records of the Loyal Retainers, including writings from just before and after the raid on the Kira residence, in a book known as the Gishijō, which includes a letter written by Ohishi Kuranosuke. It is his signature at the end which is the focus of what we can learn of his character from his brush writing.

The strokes in the characters for Ohishi 大石 have strong beginnings. A strong stroke beginning indicates a strong Will power, and a character without any sense of hesitation which sees a Mission to completion. Kuranosuke had to navigate a difficult course, caught between pressure from the moderates who sought to rebuild the Clan and the radical faction which sought to avenge their Lord by killing Kōsukunosuke. Even after the Clan was officially disbanded, Kuranosuke did not give up. Three times he submitted petitions to the Bakufu government to punish Kira Kōzukenosuke, and was involved in constant negotiations regarding the affairs of the Clan. After the Clan was disbanded he shifted his course toward that of quietly plotting vengeance for his Lord Asano.

This steely commitment to a Mission is evident in his brush writing. In his signature the name Kuranosuke 内蔵助, as well as in the text of the letter, you find strong and continuous strokes connecting the characters. This reflects an unbending commitment and continuity, as well a superior powers of concentration.

The columns of characters are written vertically, but demonstrate an inclination to shift to the left as they reach the bottom of the page, that is moving forward in the direction of the text. This reflects a positive mindset that does not easily give up. The mixture in the text of large and small characters indicates an ability to manage, and even a preference for change. Once a decision is made, he was swift to action, and he also had the ability to play numerous roles, including those requiring subterfuge to prevent discovery of their plot.

Even while the secret plot for revenge was in progress, Kuranosuke managed to disarm expectations by showing the outward appearance of a man as useless as a lantern in the daylight. However, this quality does not appear in his brush writing, so evidently that reputation was a result of a staged character, which skillfully masked his real intentions from the public and the government. It is known that for a period of time before the raid, Kuranosuke had visibly lived a life of debauchery in Kyoto.

Ohishi Kuranosuke was connected to the Asano family as its Chief Retainer, and through his Guardian Granduncle Ohishi Tanomonosuke Yoshishige. His Granduncle married the daughter of the first generation Lord Asano Naganao Princess Sen (Tsuru). Their child Sahee Nagatake was put up for adoption to another family, a custom at the time to help other families obtain a male heir, and to create strategic allegiances. The Princess had a loyal retainer who was reassigned as protector of the son Sahee Nagatake. Kuranosuke sent a letter to the loyal retainer requesting that “The family disown Ohishi Kuranosuke due to his debauchery and bad behavior.” This was a preemptive strategy designed to protect the child by disassociating himself and his behavior from the family, to resolve them of any responsibility by association, after the raid was accomplished.

The National Association for Study of the Loyal Retainers published in December 2014 a description of the Asahara Shigehide Memorandum, a document which described the letter sent by Kuranosuke to the loyal retainer. The author of the Asahara Shigehide Memorandum was the son of the loyal retainer assigned to protect the Princess and her son, and he heard from his father the story of this letter by Kuranosuke.

In addition, when the Clan was disbanded and the Castle had to be turned over to the authorities, Kuranosuke had to navigate the difficult position of managing opposing emotions on the crisis, having to send messengers to all manner of people and places with connections to the Clan, the Family Temple and related temples to ask for services to be performed for the departed spirit of Lord Asano, and how to sell off assets. He had to see to the conversion of widely dispersed Clan currency, and find a way to pay salaries and compensations, covering such Clan needs from his own assets. All of this was a task for no ordinary man.

Moreover, he kept meticulous records of all such financial transactions from the time of the disbanding of the Clan to the raid on the Kira residence. The amount spent during this period was recorded at 697 Ryō, 1 Bu, 2 Shu, and 46 monme units (176 grams) of silver, which in contemporary currency together amounts to about 83,640,000 Yen. Despite the short time allowed for opening up and surrendering the Castle to the authorities, Kuranosuke managed to keep meticulous financial records, and the Castle itself was cleaned spotless, much to the amazement of the Magistrate assigned to oversee the surrender of the Castle.

Even in plotting the raid on the Kira residence, he managed to have his own men pose as rice sellers operating right behind the residence, and samurai attendants who were able to enter the Kira residence unsuspected and obtain detailed drawings of the internal quarters. Learning from Tea Master Ōhashi Gengoemon that a large Tea Ceremony gathering was to be conducted at the Kira residence, Kuranosuke launched his raid the following morning, when everyone in the residence would have let their guard down at the end of the formal ceremonies. He paid great attention to detail in preparing their armor and clothing for the raid, sewing a white strip of cloth into their sleeves so that they could recognize and not injure each other during the confusion of the night raid.

The more you know about Kuranosuke, the more you marvel at his courage and grit under such difficult circumstances. What was the source of his power? According to Hayashida Akio, author of Yōmeigaku and Chūshingura, Kuranosuke was a student of Military Strategy from Yamaga Sokō, of Confucianism from Itoh Jinsai, of Swordsmanship from Okumura Muga, of Painting from Kano Yūeki, and Kuranosuke was an avid reader of the Analects of Confucius. He studied Kitōryū Jiu Jutsu from Horita Jidaku, which is based on the philosophy of Takuan Sōhō, and studied Zen Kōan and the idea of becoming a living Buddha from Zen Master Bankei, with the seriousness of life and death sword fighting.

It is hard to fathom the degree to which Ohishi Kuranosuke trained and polished his spirit. But we can gain a glimpse of his spirit in the death poem which he wrote before he and all 47 of the loyal retainers who carried out the raid on the Kira residence were ordered to commit seppuku.

“How peaceful and clear to leave the body behind. Bright moon, cloudless sky.” 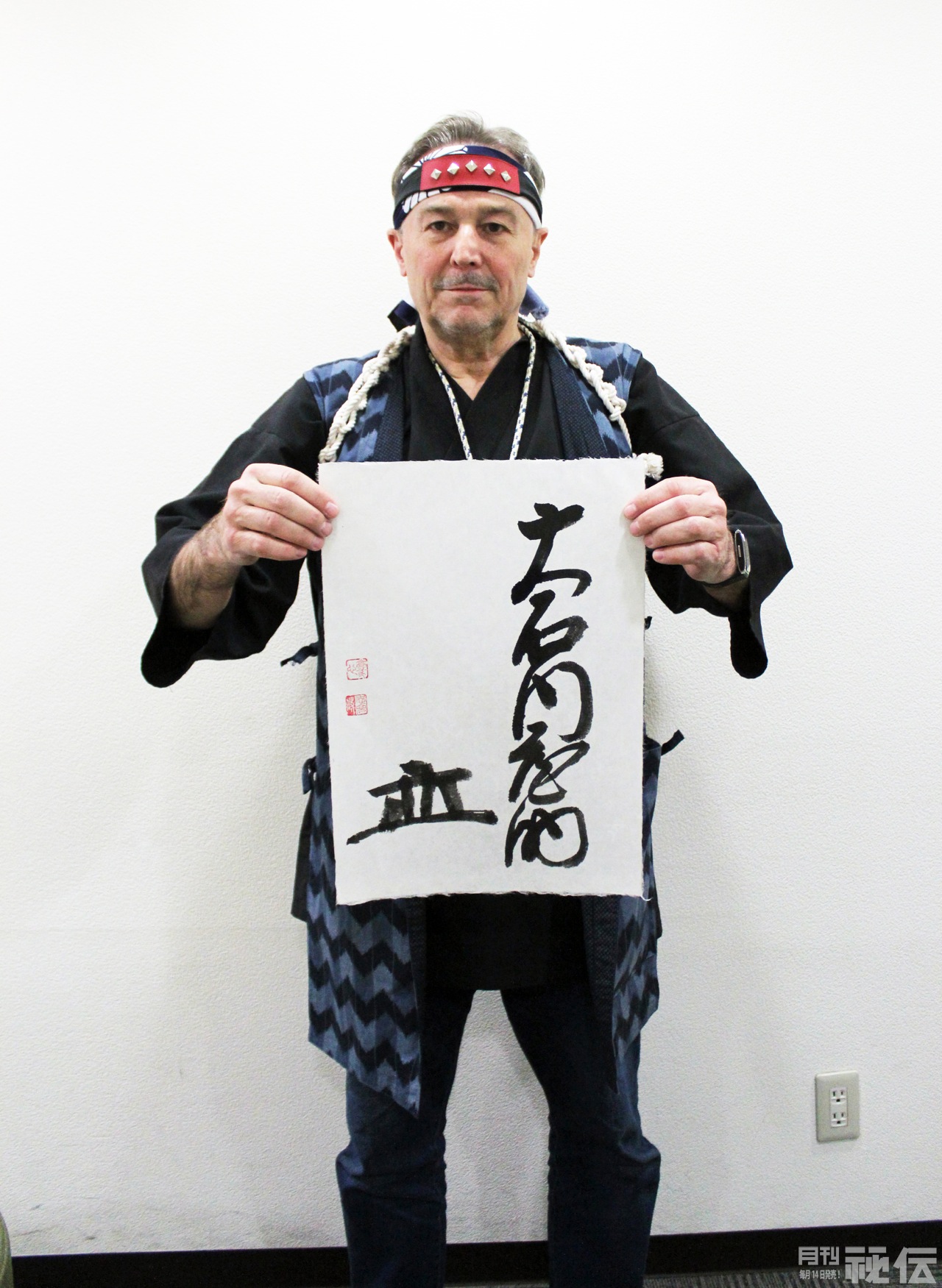 William Reed is from the USA, but is a long-time resident of Japan. Currently a professor at Yamanashi Gakuin University, in the International College of Liberal Arts (iCLA), where he is also a Co-Director of Japan Studies. As a Calligrapher, he holds a 10th-dan in Shodo and is vice-chairman of the Nihon Kyoiku Shodo Renmei, and is also a Certified Graphology Adviser from the Japan Graphologist Association. As a Martial Artist, he holds an 8th-dan in Aikido from the Aikido Yuishinkai. He holds a Tokubetsu Shihan rank in Nanba, the Art of Physical Finesse. A weekly television commentator for Yamanashi Broadcasting, he also has appeared numerous times on NHK World Journeys in Japan, and in documentaries as a navigator on traditional Japanese history and culture. He has appeared twice on TEDx Stages in Japan and Norway, and has written a bestseller in Japanese on World Class Speaking.