The Ninja are even more popular outside of Japan than among Japanese people. What is it about the Ninja that fascinates Ninja fans? In this column Renaissance Samurai William Reed looks at the appeal of the Ninja from the vantage point of a non-Japanese, and discusses the possibilities of this fascinating culture.
Photo/Video by William Reed With cooperation of Satoshi Kato and Budo Japan Editorial Staff

William Reed, with a 10th-dan in Calligraphy, painted an impression of a Ninja face above the character for 忍 (Shinobi), the first character in 忍者 (Ninja).

Non-Japanese engage in Ninja Culture on three stages. By far the largest number of Ninja fans are the Dreamers, who engage through entertainment, video games, anime, manga, cosplay, and contribute tremendously to Ninja Culture and the economy both in their passion and their creativity. A second stage is that of the Story Seekers, who are equally passionate about the Ninja, but seek to discover the historic roots and realities of Ninja Culture, studying books, articles, and documentaries in search of the roots. The third stage are the Practitioners, who train in Ninja arts and philosophy in order to experience life as a Ninja.

I learned from a member of the Japan Sports Agency BUDO Tourism Committee that the words related to BUDO which are searched most often on Google are not BUDO or Samurai, but Ninja. It is thought that the bulk of these searches are related to the world of Dreamers and entertainment.

A landmark film in this world was a spy thriller released in 1967 that introduced many people to the Ninja, You Only Live Twice, starring Sean Connery as James Bond. I remember seeing this movie in Junior High School, totally taken with how cool it was, Agent 007, Tiger Tanaka leading the bands of Ninja, and the vibrancy of Japanese Culture. They provided Dreams to Ninja fans around the World.

The Story Seekers seek their Ninja Truth through books and documentaries that explore the history of the Ninja, how they actually lived. This is an important stage, because the Story Seekers become Story Tellers, which appeals to both the Dreamers and the Practitioners, and form a bridge between the two domains.

The third stage of Engagement is the Practitioners, which can be written in Japanese in two different ways. Pronounced the same way (shugyou), there is an important difference in the meaning. 修業 (shugyou) refers to a curriculum of study or certification, which has a beginning and a graduation point, like a professional license or university degree. This is what is often sought after by people from the West coming to Japan to train in NinJutsu, or Ninja Arts.

修行 (shugyou) refers to a Way of Life known as 忍道 (Nindo), a lifetime of study from which there is no graduation.

Of the two Practitioner Schools, Ninjutsu focuses on practical survival skills, whereas Nindo encompasses the philosophy and practical wisdom as a Way of Life. A pivotal work on this subject is The Ninja Book: the New Mansenshukai, by Professor Yamada Yuji, who also established the world’s first Masters Degree in Ninja Studies at Mie University in Mie Prefecture. At the end of the book he reveals The Ten Principles for Ninja Attitude for Today, which outline the mindset and practical wisdom that we need to survive in our world today. These include such things as: 1) Don’t stand out, 2) Avoid making enemies, and 3) Make friends, each of which are explained in the contemporary context. Many of these mindsets seem quite relevant to modern people, especially compared to traditional precepts from the Bushido Code such as Justice 義 (Gi) Courage 勇 (Yuu), and Compassion 仁 (Nin).

Of course the Samurai held high ideals in the Bushido Code, but whereas the Samurai sought a way to die with Honour and a good name and reputation, the Ninja sought a way to gather intelligence and survive, without leaving names or traces. Perhaps the Ninja way of thinking is easier for modern people to relate to.

All Stages of Engagement Seek the Ninja Truth

My first serious engagement in Ninja Practice was in 2013, when I worked as a experiential Navigator in the NHK Journeys in Japan Episode Iga Ninja Forest, spending a week in training and filming with Kawakami Junichiro and Ukita Hanzo, living treasures as True Ninja Masters, totally captivated by their character and devotion as lifetime learners of Nindo. When a true Ninja engages in the entertainment stage of Ninja, like Bruce Lee they bring with it as sense of focus and Mastery that is breathtaking!

Fascinating as the techniques of Ninjutsu can be, my personal mission is to pursue the spirit of Nindo, building bridges of communication that provide free passage between all three stages of people who love Ninja Culture. 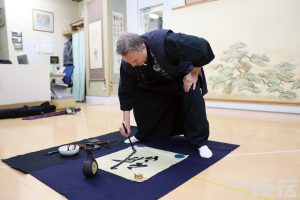