HOME >  Feature Articles >  【The Brush is the Sword of the Mind】Nakamura Tempū: the Founder of Mind and Body Unification

Nakamura Tempū (1876-1968) was born in Tokyo, with roots in the former Yanagikawa Clan. The name Tempū 天風 means Heaven’s Wind. It was given to him by the Master Teacher Tōyama Mitsuru of the Zuihen Ryū Sword School of the Yanagikawa Clan, for his mastery of an advanced sword kata called Amatsu Kaze, written with the same characters for Heaven’s Wind.

His spirit was forged in stormy times, and led to his becoming the originator of the Way of Mind and Body Unification (Shinshin-tōitsu-dō), and founder of Japanese Yoga. He taught and mentored the Admiral Nelson of the East, Marshal-Admiral Tōgō Heihachirō, Hara Takashi the 19th Prime Minister of Japan, Matsushita Kōnosuke founder of Matsushita Electric, Inamori Kazuo founder of Kyocera Corporation, baseball player and manager Hiroka Tetsurō, and the founder of Ki-Aikido Tohei Koichi. Even today his influence extends to people such as Ohtani Shōhei, the popular major-league pitcher for the Los Angeles Angels.

As a young man he became proficient in Judo, Kenjutsu, and Iaijutsu, as well as in English. At the age of of 16, he joined the Imperial Japanese Army, serving as a spy after training at the Nakano School for Military Intelligence. He survived dramatic and harrowing episodes in the Russo-Japanese War, being one of only nine agents to survive out of 113 that were dispatched to Manchuria.

After returning to Japan he was diagnosed with Tuberculosis, and given perhaps six months to live. Seeking a cure led him to earn a medical degree at Columbia University, after which he lived in England, Germany, Belgium, and France, where he was influenced by the psychology of positive thinking and the influence of mind over body as espoused by Émile Coué. Yet neither medical knowledge nor positive psychology alone were enough, and with his tuberculosis worsening, he decided to return to Japan to die in his homeland.

A forced delay in Cairo due to a temporary closing of the Suez Canal led to a fortuitous meeting with an Indian Yogi named Kaliapa, with whom he spent several years in Nepal in austere training in Meditation, Raja Yoga, and Karma Yoga. This cured him of tuberculosis, and laid the foundations for what he taught in Japan for over 50 years. He founded the Tempukai at Gokokuji in Tokyo, influencing tens of thousands of people with his teachings, and living until the age of 92.

He was himself a successful businessman, a charismatic teacher, and displayed remarkable courage and fairness despite encounters with the Kempeitai Secret Police during WWII for his anti-war speeches, and mediating in violent labor disputes. He earned credibility and respect living by the principles that he taught. Through Mind and Body Unification and Japanese Yoga he built a bridge of practical wisdom and a way of life for modern people.

Coming to Japan in 1972, I never met Nakamura Tempū, but studying Shin Shin Tōitsu Aikido directly with Tohei Koichi Sensei for over 30 years, I came as close as was possible to Nakamura Tempu’s Teachings, as Tohei Sensei applied them to every aspect of his teaching for Aikido and Daily Life. It was an essential pillar to his teaching.

But three authors in particular gave me a fresh yet familiar view of Nakamura Tempū,  of his core teachings underneath as well as outside of its application to Aikido.

Stephen Earle is the author of a most remarkable biography of Nakamura Tempū, Heaven’s Wind, having retraced the Master’s steps even as far as Nepal. In breathtaking narrative, he captures the essential thoughts, actions, and stories of one of the most remarkable men of our time. In the author’s words:

“Less than fifty years after Tempū’s death, it is impossible to read his writings without discovering antiquated observations and outdated philosophical arguments, but that is only to be expected; far more important are the aspects of his teachings that are timeless and therefore have immediate applicability to the here and now of this complicated age. Certainly, the most timeless and most important tenet of his teachings is that human intentionality is a genuine force with a real effect, and that by living fully in the present, we have at our disposal the means to create our future. “ (page 345 – 346)

In the author’s words:

“I believe Nakamura Tempū tapped into something timeless in India, something beyond words but not beyond our ability to experience. The most important aspects of his teachings are eternal truths, principles at once ancient and contemporary. His life’s work is embodied by a non-dualistic worldview, complete with pragmatic exercises and experiments, which allow anyone to have firsthand experience of our innate unity of mind and body as well as our intrinsic link to the universe.”

“While his principles of mind and body unification are universal, meaning that they can enhance the lives of people regardless of gender, ethnicity, and so on, each generation and culture relates to these principles through the lens of their upbringing and society. Just as Nakamura Sensei found new ways to communicate his training in India to Japanese starting in the 1920’s, ways that they could relate to, I think the same thing has to happen today to allow this important spiritual path to flourish internationally. Unfortunately, that hasn’t taken place to any great extent, and while his methodology is popular in Japan, it’s nearly unknown in the West.”

Sawai Atsuhiro is one of the top students of Nakamura Tempū, and the author of The True Paths to Meditation, a practical and balanced guide to meditation as taught by Nakamura Tempū. He is the author of many books in Japanese on Tempū Meditation and Philosophy. Sawai Sensei has worked closely with Hugh Davey to spread his teachings through the International Japanese Yoga Association. www.japanese-yoga.com

Sawai Sensei’s book reveals many misconceptions about meditation, and provides exercises to deepen concentration, enter deeper meditative states, and gain practical benefits to mind and body. His book is an international bridge to Nakamura Tempū‘s Teaching.

Seeing into the character

While it is wonderful to have such resources that make Tempū‘s teachings so accessible, is there a way that we can even come closer to the man himself? His brush writing provides direct clues to his character.

The poem shown hear is part of Tempū‘s extensive writings. In translation it reads:

“No one has the right to impose an obligation for self-reflection on another. Self-reflection is something each person must quietly pursue within themselves.”

The four lines of text are brushed in steady vertical lines, a feature characteristic of people with strong concentration and self-control, something which he must
have gained through his early mastery of the Sword, Martial Arts and Meditation.

Some of the characters have ample internal space, reflecting his depth of character. Thick lines in the strokes show a strength of will power. Stroke beginnings are direct and unaccented, showing an openness to experience.

Space between the characters is evenly paced and unrushed, like a stately procession.

The character for 粛 meaning quiet and tranquil, has a broad and stable base. The character 省 in the word for self-reflection has a charm and friendly expression, not written twice the same way. Moreover, It is wide open, as if the doors and windows were left open an unprotected. Yet this is also the writing of a master of the sword, who’s mastery allowed him to be at ease even in the midst of danger.

The characters 何 and 利 at the beginning of the first and second line are wider than they are tall, and reflect a steady and stable mind.

The vertical line at the right of the character for 利 shows an unsteady line, perhaps a sign of mental fatigue. The rhythmic blend of thick and thin strokes shows a preference for motion and change. The overall impression of speed in the strokes also shows a preference for variety and action, of which his life had plenty!

Nakamura Tempū was a man who repeatedly beat the odds, surviving and thriving in dangerous and difficult conditions. The rough edges of his youth became tempered into a spirit of unbounded optimism and love of humanity, leaving us a legacy that is timelessly relevant, that we have the power to improve ourselves and our circumstances with positivity, intention, and presence of mind. 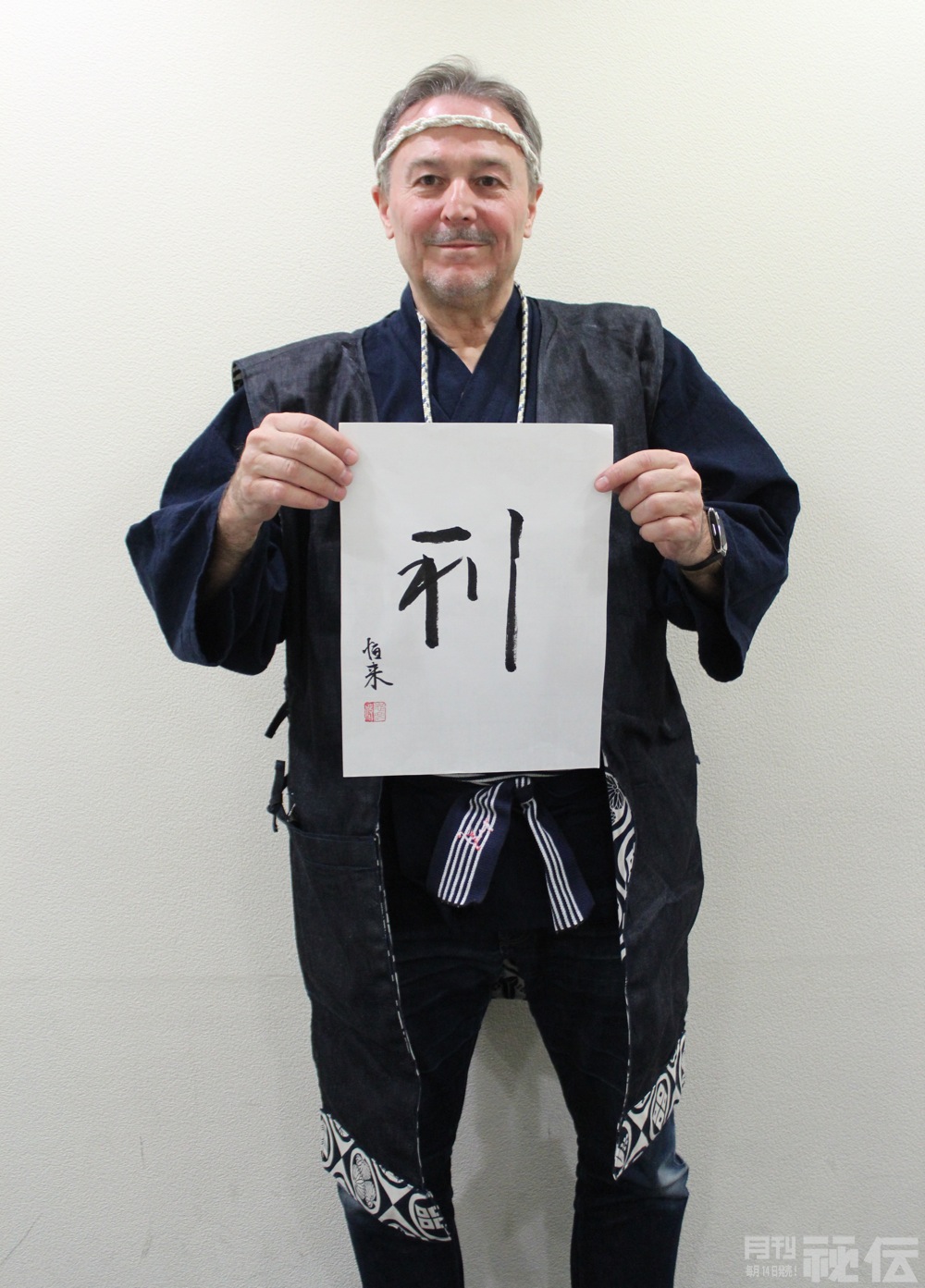 William Reed
is from the USA, but is a long-time resident of Japan. Currently a professor at Yamanashi Gakuin University, in the International College of Liberal Arts (iCLA), where he is also a Co-Director of Japan Studies. As a Calligrapher, he holds a 10th-dan in Shodo and is vice-chairman of the Nihon Kyoiku Shodo Renmei, and is also a Certified Graphology Adviser from the Japan Graphologist Association. As a Martial Artist, he holds an 8th-dan in Aikido from the Aikido Yuishinkai. He holds a Tokubetsu Shihan rank in Nanba, the Art of Physical Finesse. A weekly television commentator for Yamanashi Broadcasting, he also has appeared numerous times on NHK World Journeys in Japan, and in documentaries as a navigator on traditional Japanese history and culture. He has appeared twice on TEDx Stages in Japan and Norway, and has written a bestseller in Japanese on World Class Speaking.