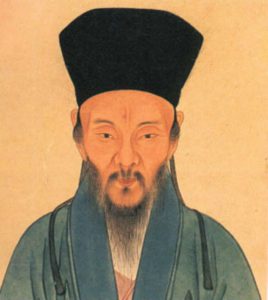 The Founder of Neo-Confucianism Wang Yang Ming (Oh You Mei), which had a deep influence on Bushido in Japan.

In the past many masters of the sword were also masters of the brush. The arts of the sword and the brush share many things in common, and each contributes to the other. In the series William Reed, Shodo 10th-dan and Aikido 8th-dan, explores the spirit of the Samurai as revealed in their brushstrokes. In this 10th article of the series we look at the brush writing of Wang Yang Ming, Founder of Neo-Confucianism, exploring the roots of the Samurai Spirit, which had a formative influence on Bushido in Japan, as well as the philosophy which brought Japan into the Modern Era, from the point of view of a modern Renaissance Samurai.

The Founder of Neo-Confucianism, a Master of the Sword and the Brush

Wang Yang Ming (Oh Youmei) (1472~1529) was a Confucian Scholar in China who lived during the Ming Dynasty. More than just a philosopher, he was a man of action, a senior government official, and a military man. His given name was 守仁 (Jujin), but he adopted the name 陽明 (Youmei). His father was the Minister of Scientific Experimentation, who had served under the previous Emperor, so Youmei came from a prestigious family. He is also descended from the distinguished lineage of one of the Saints of Calligraphy Wang Xizhi (Ohgishi).

Youmei was both an interpreter and a practitioner of Neo-Confucianism. He was tormented by the gap that separated mind from principles, thought from action. From the age of 15 for over twenty years he studied the Five Disciplines of Chivalry, Horsemanship, Literary Arts, Taoism, and Buddhism, in an intense period of implementation in search of Truth. It was his experiences during this period, and what followed in his period of demotion, sent to a remote region where he did not speak the language, which amounted to exile, that formed the crucible which led to his great insights and conviction in the form of Neo-Confuciansism (Youmeigaku). This practical philosophy of action had a large impact on the modernization of Japan, even into the Meiji Period.

Looking at the Calligraphy of Youmei, you are struck by the strength of the stroke beginnings, where the brush first meets the paper. The initial part of the stroke can be made as a smooth entry along the line of the stroke, or it can be made as a accent in itself, with the brush changing direction before entering the line of the stroke, as it is in the Youmei brush strokes. A strong stroke beginning is a sign of a strong will power, a mind which takes action with strong determination. Youmei himself was dissatisfied with the Neo-Confucian doctrines of his time, and through years of dedicated efforts under difficult circumstances, he achieved his own awakening to the essence of his own interpretation of Neo-Confuciansism (Youmeigaku), of which he is recognized as the Founder. He was not one to uncritically swallow the teachings of others, and he pursued the philosophy relentlessly in practice, until he formed his own convictions. One aspect of this is suggested in his brush writing.

Moreover, the right hand sweep stroke (migibarai) is exceptionally long. We have seen a similar style of writing this stroke in the brushwork of Kaisen Joki, the Buddhist Priest of Erinji, with whom Takeda Shingen was deeply impressed. Kaisen was the author of the famous words uttered before Oda Nobunaga set fire to Erinji Temple, “If the mind is clear of all mundane thoughts, even the fire will feel cool.” (shintou mekkyaku sureba hi mo mata onozukara suzushi). Such were his upright passing words.

Youmei reported to the Emperor on the illegal activities of certain government officials, and was instead met with an almost unbearable punishment of 40 lashings to the bone. Flesh torn, bloodied with bones broken, he was then relocated, effectively banished to a distant land where he did not speak the language. His unbroken spirit under such cruel circumstances, his capacity for endurance in the face of adversity, is reflected in the long right sweep of his calligraphy strokes.

Another feature of Youmei’s Calligraphy is seen in the equal spacing of horizontal strokes in the character for 書. This reflects his reasoned mind and stable temperament, as well as his ability to remain unswayed by circumstances and pressure. You see many examples of long left sweeping strokes and long extended vertical strokes in the Karoukenki document. These suggest a person whose thinking goes beyond that of ordinary people, as well as an urge to press beyond, a subconscious habit of making efforts beyond those of others. This is often found in the brush writing of people who led the thinking of their times beyond the ordinary conventional way of thinking.

The Strong Influence of Youmeigaku on Japanese Bushido

Youmeigaku had a deep influence on the formation of Bushido in Japan, as well as on Japanese society. According to Hayashida Akio, the leading expert in Japan on Youmeigaku, in his book Introduction to Youmeigaku (Wani Books, in Japanese), Youmeigaku was introduced into Japan in the time of Toyotomi Hideyoshi, and was studied by Buddhist Priests of the leading Sects of Buddhism at that time. Unlike in China, where Neo-Confucianism was studied by bureaucratic officials, in Japan it become a popular subject of study by the common people, and took deep roots in Japanese society. Among the precepts which took hold were ideas suggesting that an individual could gain immediate and intuitive grasp of what was good and right, and that this was directly connected to the will of Heaven. Furthermore, Neo-Confucianism promoted the idea that thought and action should be one, and that anyone could learn to immediately take action on their thoughts and beliefs.

Leading Japanese scholars who brought this interpretation to Japan started with Nakae Toju, and his students Kumazawa Banzan, Fuchi Kozan, Ishikawa Kichizaemon, and many of their students. Among other historical figures who were influenced and lived by this philosophy were Ohishi Kuranosuke the leader of the 47 Ronin of Ako, Oshio Heihachiro, Yoshida Shoin, Takasugi Shinsaku, Sakamoto Ryoma, Nakaoka Shintaro, Iwasaki Yataro, Saigo Takamori, Okubo Toshimichi, and many of the Samurai Men of Purpose who lead Japan into the Modern Era. Even after that, Youmeigaku continued to influence people in Modern Japanese History such as Yamamoto Isoroku, Togo Heihachiro, Inukai Tsuyoshi, Yasuoka Masahiro, generations of Japanese Prime Ministers, and countless others who studied them and led Japan into the era of modernization. The impact of Youmeigaku on the development of Japan is unfathomable.

In China however, the country which spawned Neo-Confucianism, its influence has waned over time. In China Scholarship was considered to be superior to Military prowess. It was the Samurai in Japan who practiced and idealized the Mastery of both Sword and Letters to the highest degree. However, with modernization came the wave of colonialism by Western countries throughout Asia and Africa. In China the Opium Wars with Great Britain spawned fears of being overwhelmed by the Western powers, and many students were sent to Japan to develop human resources that could help strengthen the country against such influences. It was here that many Chinese foreign students discovered the impact of Youmeigaku, which resulted in a reverse importation and revaluation of the philosophy in China. However, this came to an abrupt halt with the Cultural Revolution in China, where the grave of Wang Yang Ming was desecrated. The gravesite received support out of respect from Japan for restoration in 1989.

If you are interested in learning more about Youmeigaku, one of Hayashida Akio’s books on the subject has been translated into English, and is available on Amazon Kindle.

An Authentic Introduction to Youmei-gaku The Philosophy of Wang Yangming, by Akio Hayashida. This book is used as a textbook in the MBA Program at GLOBIS University in Japan. He makes comparisons with the teachings of Buddha, Christ, Johann Wolfgang von Goethe, and Rudolf Steiner, and looks at Youmeigaku from many angles and applications. His book is an authoritative reference on Youmeigaku. 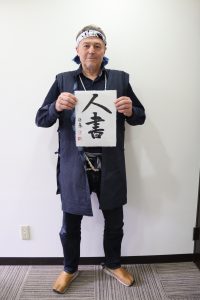 William Reed is from the USA, but is a long-time resident of Japan. Currently a professor at Yamanashi Gakuin University, in the International College of Liberal Arts (iCLA), where he is also a Co-Director of Japan Studies. As a Calligrapher, he holds a 10th-dan in Shodo and is Vice-Chairman of the Nihon Kyoiku Shodo Renmei, and is also a Certified Graphology Adviser by the Japan Graphologist Association. As a Martial Artist, he holds an 8th-dan in Aikido from the Aikido Yuishinkai. He holds a Tokubetsu Shihan rank in Nanba, the Art of Physical Finesse. A regular television commentator for Yamanashi Broadcasting, he also has appeared numerous times on NHK World Journeys in Japan, and in documentaries as a navigator on traditional Japanese history and culture. He has appeared twice on TEDx Stages in Japan and Norway, and has written a bestseller in Japanese on World Class Speaking. For other articles in the Mastery of Sword and Letters Series, visit http://www.samurai-walk.com/samurai-shodo